Risk Factors for Falls and Cognitive Decline in Older Individuals

Dtsch Arztebl Int 2015; 112: 101-2. DOI: 10.3238/arztebl.2015.0101
An editorial to accompany the articles “Geriatric patients with cognitive impairment: patient characteristics and treatment results on a specialized ward,” by Wolfgang von Renteln-Kruse et al., and “Treatment in a center for geriatric traumatology: evaluation of length of hospital stay and in-hospital mortality in a prospective case series with historical controls,” by Stefan Grund et al., in this issue of Deutsches Ärzteblatt International

To English-speaking physicians, “geriatric giants” are dangerous conditions from which elderly persons are particularly likely to suffer. The term is said to have been coined by Bernard Isaacs, a British geriatrician (1); it makes vividly clear that these conditions can greatly imperil elderly patients’ health. German-speaking physicians encapsulate them in the “five I’s”: immobility, instability (falls), incontinence, intellectual impairment, and iatrogenic complications, e.g., resulting from inappropriate medication. Two original articles that appear in this issue of Deutsches Ärzteblatt International devote particular attention to falls and cognitive impairment in the elderly.

Falls become markedly more common with increasing age and toward the final years of life because of declining muscle strength and worsening equilibrium. Because elderly persons also have slower protective reflexes and often suffer from osteoporosis as well, their risk of injury from a fall is higher. According to the German Federal Statistical Office, about 160 000 femoral neck fractures occur in the country every year, mainly in the elderly. Thanks to modern surgical and anesthesiological techniques, nearly all cases are amenable to surgical treatment, without any limitation by age. Thereafter, however, the postoperative care and rehabilitation of these patients can present major challenges. Many hospitals now meet these challenges (or plan to do so) with close collaboration between trauma surgeons and geriatricians.

In this issue, Grund and colleagues, from the Diakonissenkrankenhaus in Mannheim, Germany, report the results of a collaboration of this type in a certified center for geriatric traumatology (CGT), whose structure they describe in detail (2). A major element of the CGT is collaborative treatment by the trauma surgeons and geriatricians—for example, of complications (especially delirium) and comorbidities. The authors analyzed the outcomes of patients aged 75 or older who underwent surgery for a pelvic ring fracture, proximal humeral fracture, or proximal femoral fracture, either before or after the establishment of the CGT (169 and 216 patients, respectively). The percentage of patients aged 75 and over treated in intensive care units fell from 20.7% to 13.7%, and the in-hospital mortality fell from 9.5% to 6.5%. On the other hand, the mean hospital stay lengthened slightly, from 13.7 days (on the trauma surgery ward) to 16.9 days (in the CGT). No data are presented here on mobility or functional independence in everyday life; it may well be that the longer stays in the CGT were associated with better functional outcomes, although no major reduction was seen in the percentage of patients sent to inpatient rehabilitation facilities, rather than being directly discharged home. This study was neither randomized nor controlled, but its findings nevertheless clearly indicate a benefit of such collaborations between trauma surgeons and geriatricians.

Another risk factor of major clinical importance is cognitive impairment, which causes severe problems for care on hospital wards, particularly in the case of delirium. Patients who are disoriented (especially in the evening or at night), wander aimlessly around the ward, or even wander off the ward and go missing are often beyond the capacity of traditionally structured units to care for. Many hospitals have established special treatment areas for demented or delirious patients. Although there is now good scientific documentation of the frequency of delirium and the risk factors for it, e.g., after surgery (3), effective medical treatment remains difficult (4). Delirium can often be diagnosed and treated in timely fashion (5). Moreover, special attention must be paid to the risk of adverse drug effects in elderly patients, who often take multiple drugs simultaneously (6). These are flanking measures; above all, what elderly, cognitively impaired patients need is good, structured care in a suitable setting.

The Albertinen-Haus Geriatrics Center in Hamburg was a pioneer in this area when it established a so-called cognitive geriatric ward in 2009. The special characteristics of this ward include higher staffing, specially trained personnel, and architectural details such as hidden exit doors and a circular walkway. The results of treatment on this ward are presented descriptively in an article in this issue by von Renteln-Kruse and colleagues (7). Two cohorts are described: one consisted of 2084 patients treated on the ward from 2009 to 2014, and the other was a sample of 380 patients treated on the ward who were included in the LUCAS hospitalized cohort (8). More extensive information was available for the latter group, e.g., the number of medications taken and further data from geriatric assessments. It is clearly a sign of success that, even in this population of cognitively impaired patients, 70.1% of the overall sample were able to return to their pre-admission living situation on discharge. This study did not include any control group receiving traditional inpatient treatment; thus, it obviously cannot prove that the cognitive geriatric ward yields better outcomes than traditional treatment. Nonetheless, the mode of treatment described by the authors seems well-founded and should be considered a good option for the treatment of elderly patients with dementia or delirium who are acutely somatically ill.

Parallels to the stroke unit

These two reports present promising strategies for solving central problems in the care of elderly patients. The authors of both point out, however, that controlled trials are still needed to prove these methods are better than conventional treatment. There is an obvious analogy here to stroke units in neurology, whose benefit has already been shown in this way. The first important step has already been taken with the presentation of these new treatment strategies for the elderly to the broad medical public.

The further assessment of these treatment strategies will require resources that exceed the capacity of a single hospital and can only be made available by a larger consortium.

Prof. Hager states that he has no conflict of interest. 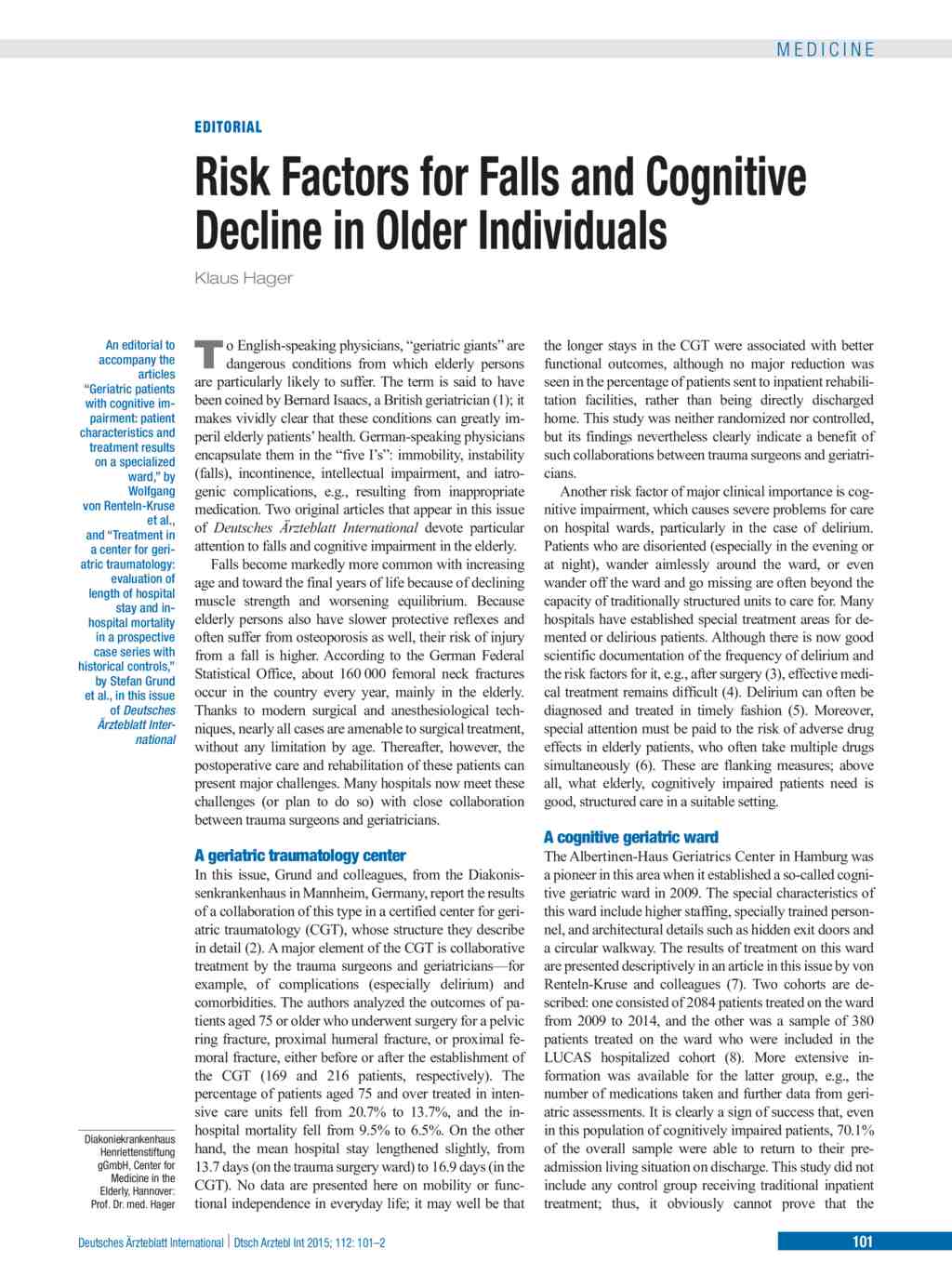