The study forms the basis of the new immunization recommendations from Germany’s Standing Vaccination Committee (STIKO) (1). Condom use (prevents 70% of infections and 100% of lesions) and smoking (increase of carcinoma in situ up to factor 27) were not considered as factors of influence (2, 3), in spite of STIKO’s rules of operation (other options for prevention). This fact distorts the registration trial to an unknown degree, which means that its results are questionable because of bias. Evidence and evaluation cannot be attained in this way. It was unethical not to point out to participants the protective effect of condoms. The authors (some of whom are members of STIKO) mentioned adverse medication effects briefly, without any mention of the discussion on the future of immunization in Japan, India, Spain, and France—among others—because of adverse effects. The STIKO does not mention adverse effects at all in its recommendation. Publications about the importance of adjuvants—for example, by Shoenfeld (ASIA syndrome) and Exley—were completely ignored (4, 5). The past is catching up with authors of all study reports as adjuvants without the actual effective substance (virus-like particles) were used as a placebo. What was studied was not the safety of the vaccines, but whether the adjuvants trigger the same adverse effects as the full vaccine. The use of such a placebo is unethical because it can only be damaging, and it was—the rate of adverse events for the vaccine was at “placebo level.” Balancing risks and benefits, as well as a comprehensive clarification of what is known and what is not, are essential—scientifically, legally, and ethically. The study design has to make answers to questions possible. Postmarketing surveillance has to provide concrete answers about the rate of adverse effects: the product information for Gardasil reports “rate unknown” for seven out of 12 adverse effects.

Conflict of interest statement
Jürgen Fridrich has received honoraria for coauthorship, conference delegate fees, travel and hotel expenses, and honoraria for preparing scientific conferences and a research project initiated by him personally for Libertas & Sanitas reg. assoc. He is chair of Libertas & Sanitas reg. assoc. and author of the book Impfen mit den Augen des Herzens betrachtet – Tatsachen statt Expertenmeinungen [Immunization studied with the eyes of the heart—facts rather than expert opinion]. 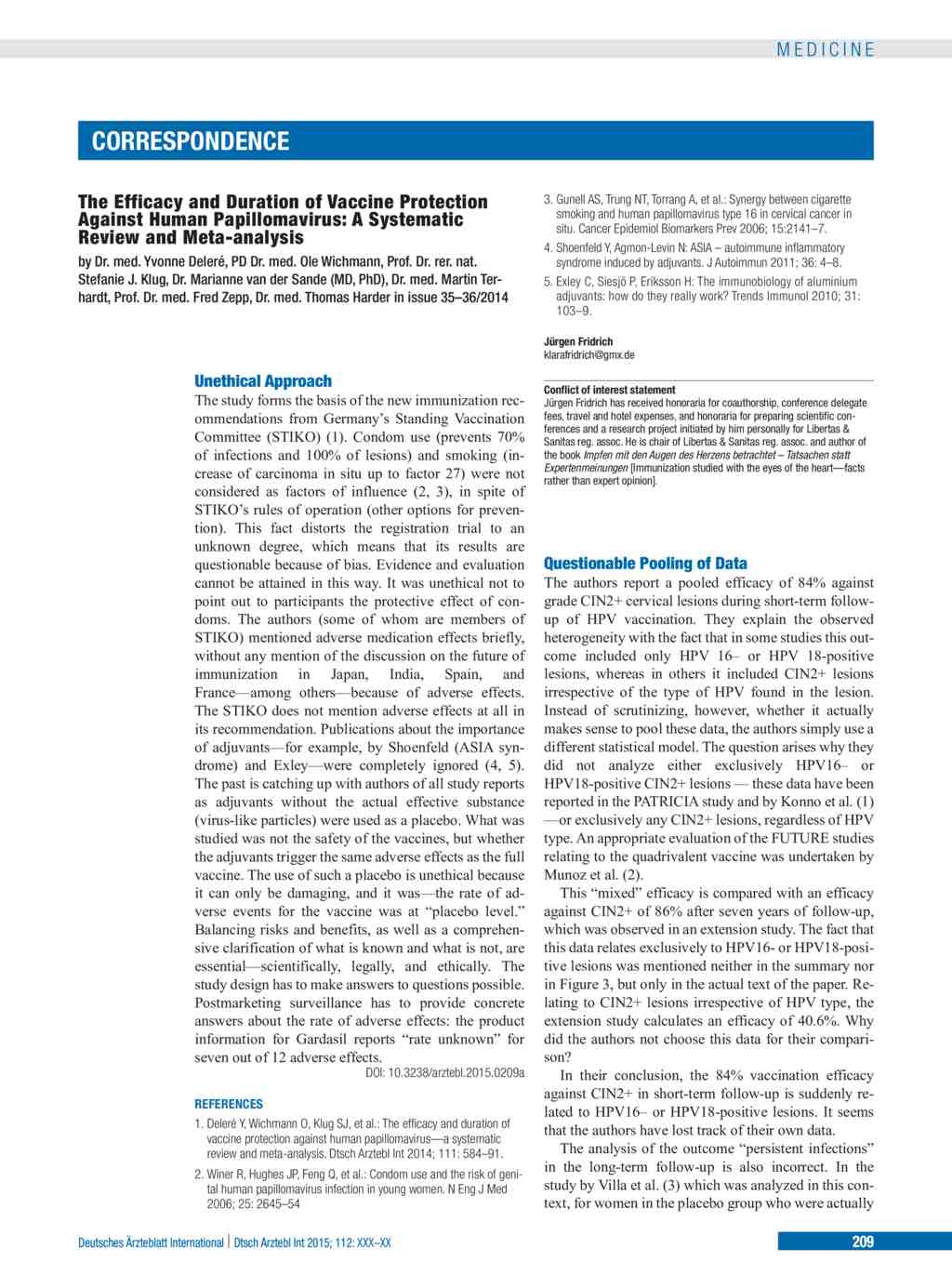