We included results from randomized clinical trials in our systematic literature review with meta-analysis on the duration of vaccine protection against human papillomavirus. We explained the studies and evaluation of results according to GRADE in as transparent a manner as possible.

Our study does not represent a general risk-benefit evaluation of HPV vaccination, even though the correspondent of the first letter to the editor wrongly interpreted it as such. Furthermore, our study did not aim to assess the likelihood of infection depending on the possible risk factors or protective factors, not did it aim at addressing possible adverse effects. For this reason, we did not discuss questions relating to the protection conferred by condoms or the influence of smoking. As we mentioned in our article, systematic literature reviews on the topic of adverse effects have been published. The first letter made a series of claims but did not cite any scientific sources in support of these. This includes, for example, the statement that the primary studies had been unethical because participants had not been informed about the protection conferred by condoms. In the primary studies, the question of the efficacy of the vaccine had been investigated in a setting of contraceptive methods as used by the participants. All studies had a positive vote from the ethics committee. Further studies are needed in order to establish whether, and to what extent, consistent use of condoms can actually prevent the development of persistent infection with high-risk HPV types.

The author of the second letter asks why we did not evaluate exclusively higher-grade CIN lesions, independent of the HPV type. We agree that higher-grade CIN lesions correspond to an important end point, independently of the HPV type. For this reason, the data that were available were used and explained. Only where these data could not be extracted from the published studies did we additionally include results for lesions independent of HPV type in a separate group. On comparing the published data on effectiveness independent of HPV type in the article cited in the letter (1) with those from the long term study (2) on the same end point, the conclusion is that there are no indications for a gradual disappearance of the protective effect. As we explained in our article, however, the evidence backing the long term follow-up is, however, of low to very low quality.

We also have to take issue with the explanation in the last paragraph of the second letter. The analysis of the end point “persistent infections” is not incorrect. In the publication (3), Table 2 lists “infection and disease” as end points. Under this heading, separate data on “infection” and “disease” are reported, the latter subcategorized into “CIN-I-III” and “condyloma.” Data on end points by HPV type were added. We extracted data for our analysis from that particular latter part of the table, whereas a comparison with the top part of the table shows that these related almost exclusively to infections. This example shows that the included original studies had numerous problems relating to the presentation of the data. Searching for evaluable data in the context of a systematic review is time consuming and requires particular diligence. According to international standards, a minimum of two independent investigators should conduct the literature search and data extraction, which was the case in our study. 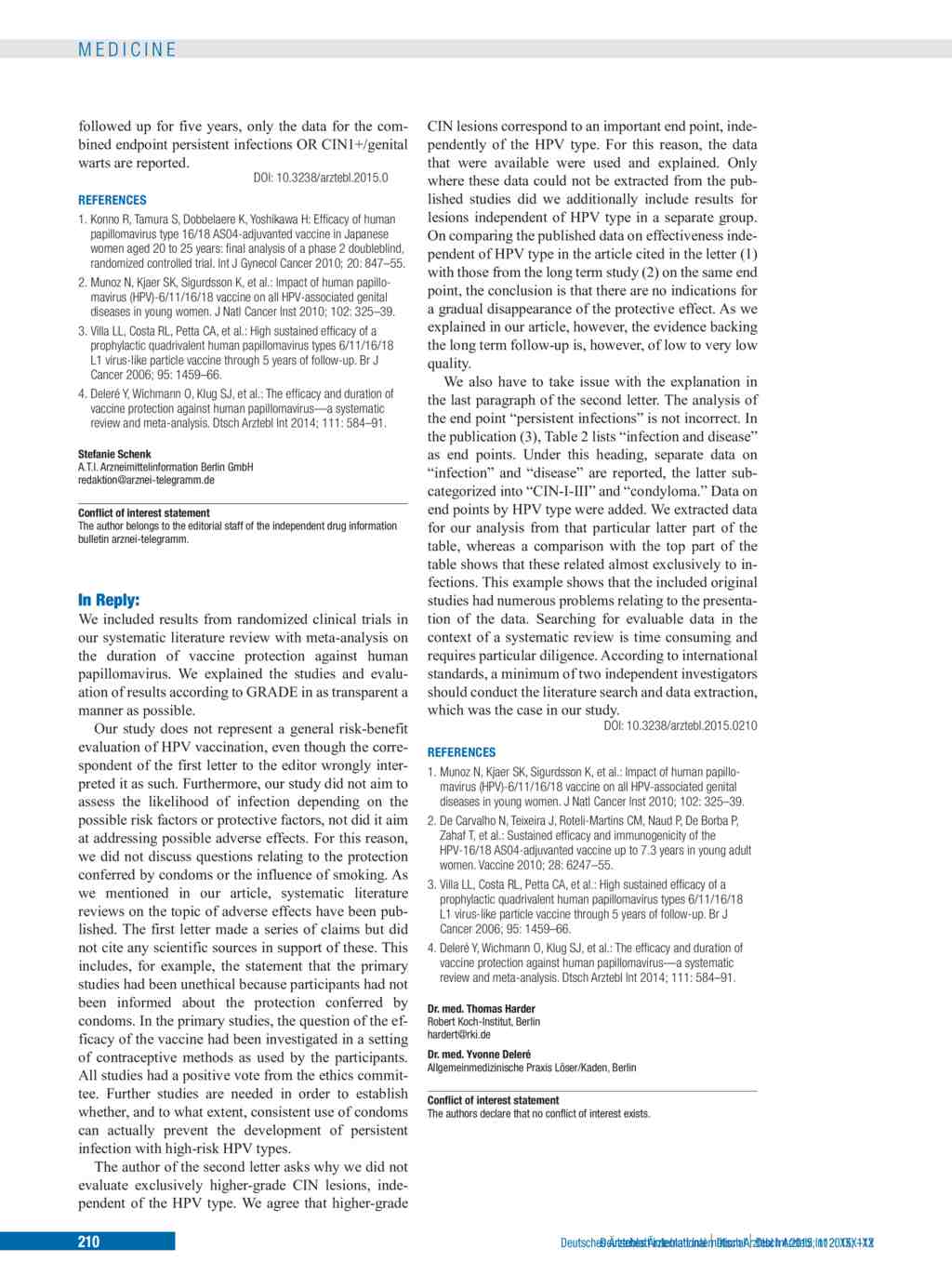