Methods: This article is based on a selective review of the literature, including the guidelines of the National Comprehensive Cancer Network and the European Society of Medical Oncology.

Anal carcinomas account for 0.3% of all malignant tumors, 1 to 2% of all gastrointestinal tumors, and 2 to 4% of all colorectal and anorectal tumors (1, 2). A total of 7060 new cases were recorded worldwide in 2013 (3). Women are affected somewhat more frequently (0.5 to 1 per 100 000) than men (0.3 to 0.8 per 100 000) (4). The annual incidence rate worldwide is 4 to 7 per 1 million population, with frequency peaking between the ages of 58 and 64 years (5). Although incidence has increased substantially over the last 30 years—particularly in HIV patients, among whom the most recently reported incidence density rate in Germany is 34 or more per 100 000 patient-years—there are no international, globally accepted, guidelines for screening in high-risk groups (6).

Histological tumor types are classified according to the World Health Organization (WHO) system (2, 17) (Box 2).

Total biopsy is recommended for lesions smaller than 1 cm or isolated mucosal findings, but punch or incision biopsies are preferable for tumors larger than 1 cm. Larger excisions for biopsy or tumor reduction often lead to damage to the sphincter and should therefore be avoided.

It should be particularly noted that incision biopsy is not permitted if relapse is suspected (see Follow-up). Clinical examination alone is not sufficient for diagnosis of metastasis to an inguinal lymph node, as 44% of all lymph node metastases are smaller than 5 mm and so cannot be identified with certainty by palpation (19). If there are clinical or radiological grounds to suspect lymph node involvement, a Tru-Cut or excision biopsy, possibly under anesthetic, should be performed in case of doubt. The pelvic lymph nodes are evaluated using computed tomography or magnetic resonance imaging of the abdomen/pelvis.

Sonography and computed tomography are suitable for both evaluating tumor extent and diagnosing distant metastases. The final procedure for staging is dual-level radiological examination of the lungs. Functional integrity of the sphincter should also be evaluated and recorded before therapy and during aftercare.

Two European phase III trials have shown a clear benefit for simultaneous 5-fluorouracil (5-FU) and mitomycin C (MMC) chemoradiotherapy over radiation alone: the EORTC 22861 trial examined data from patients with T3 to 4, N0 to 3 and T1 to 2, N1 to 3 anal carcinomas (27). It found a clear benefit for chemoradiotherapy in terms of complete remission, local control, and absence of colostomy after five years. There was no significant difference in terms of overall survival. The UKCCCR trial (ACT I) investigated all stages other than T1N0. Long-term analysis after 12 years showed sustained improvement in locoregional control in the chemoradiotherapy arm of the trial. Local control, absence of colostomy, disease-specific survival, and overall survival were also better. There was no difference in terms of late toxicity (28, 29).

The last available trial (UNICANCER ACCORD 03) was conducted in France. It investigated the value of induction chemotherapy and a local increase in radiation dose (boost). This was a four-armed study. It found no superiority in any arm; in other words, no benefit for either induction chemotherapy or boost dose escalation (34).

In conclusion, risk-adapted chemoradiotherapy up to a total dose of 50.4 to 59 Gy, combined with simultaneous 5-FU and MMC, should be the standard treatment in the future. There is currently no rationale for additional induction or maintenance chemotherapy except within clinical trials (Table 1).

Cylindrical abdominoperineal rectal extirpation or multivisceral resection with end colostomy and primary transabdominal transposition of a vertical rectus abdominis myocutaneous (VRAM) flap to cover the perineal resection defect can now be recommended as a surgical method for complete removal of persistent, relapsing, or advanced tumors (37, 38). Rectal extirpation is required as salvage surgery in approximately 10 to 30% of cases; it is performed as a result of local relapse in approximately 19% of cases (16, 35, 36).

Groin dissection should not be performed prophylactically. It should only be performed as salvage surgery in cases of confirmed inguinal relapse or for persistent inguinal lymph node metastases following chemoradiotherapy. This is because the risk of lymphoedema or a lymphatic fistula is very high, and radiotherapy of the affected region leads to better outcomes (26, 39).

The current aftercare guidelines have been revised since 2010. According to the most recent recommendations, patients with complete remission should be re-evaluated using clinical and digital rectal examination and palpation of the inguinal lymph nodes eight weeks after the end of chemoradiotherapy and then every three to six months (18). Locoregional relapse is more common than distant metastasis, so annual imaging of the chest, abdomen, and pelvis is recommended for a total of three years (2, 18, e3–e7). Resection of distant metastases does not improve survival rates. It should be noted that Tru-Cut punch or forceps biopsy is indicated for suspected local relapse. Incision biopsy should be avoided, as the risk of incontinence or severely delayed wound healing is extremely high. Aftercare ends after five years. Data from the ACT II trial shows that only 1% of relapses occur after more than three years (2, 18).

According to the results of the phase III trial (RTOG 98–11), male sex and N+ stage were independent factors for tumor-free survival following combined 5-FU and mitomycin C or cisplatin chemoradiotherapy (Table 2). Male sex, N+ stage, and tumor size greater than 5 cm were reported as independent prognostic factors for overall survival (32). Secondary analysis showed that tumor size was also associated with colostomy rate (31). The previously published EORTC 22861 trial showed male sex, N+ stage, and ulceration as adverse prognostic factors for overall survival and locoregional control (27). Nutz, in a review of the literature, reported a decrease in the five-year survival rate from 75% for well differentiated tumors to 25% for poorly differentiated tumors (26). Inguinal lymph node metastases are found in up to 25% of cases and according to multiple studies are independent factors for poorer prognosis. In older patients, anal carcinomas are most commonly initially diagnosed at an advanced stage, so age is considered to be only an indirect prognostic factor (26). 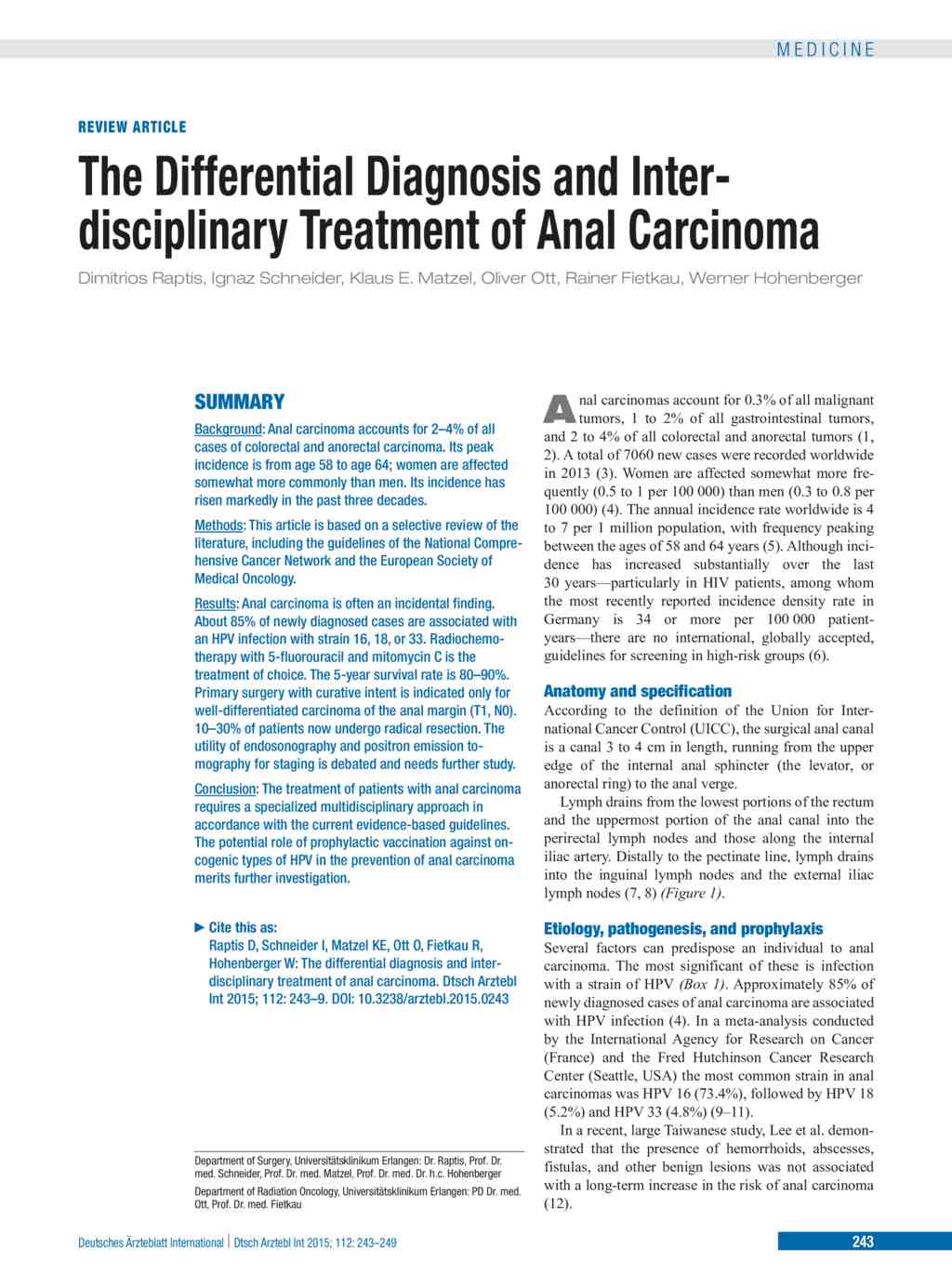