The Preventing of Postoperative Delirium

Background: Delirium is a common complication in elderly hospitalized patients. It prolongs the length of hospital stay, raises costs, increases the workload of the nursing staff, and may necessitate transfer of the patient to a nursing home. The risk of postoperative delirium is particularly high in elderly patients with pre-existing cognitive deficits.

Methods: In an open study, we systematically assessed the frequency of postoperative delirium in patients over age 70 on two surgical wards of a general hospital. In a six-month “prevalence phase,” from March to August 2011, we counted the number of patients with postoperative delirium, but did not initiate any intervention. Thereafter, in a ten-month “intervention phase” from September 2011 to June 2012, a nurse with special training in the management of delirium carried out an intervention involving component measures of the Hospital Elder Life Program (HELP) on one of the two wards, with the aim of preventing postoperative delirium. The patients on the other ward served as a control group.

Results: In the prevalence phase, 20.2% of all patients developed postoperative delirium (95% confidence interval [CI], 14.6–26.4). In the intervention phase, postoperative delirium arose in 20.8% (95% CI, 11.3–32.1) of the patients on the ward with no specific interventions, but in only 4.9% (95% CI, 0.0–11.5) of those on the ward where the intervention was carried out. The difference was presumably due to the measures initiated by the specially trained nurse, including validation, improvement of sleep, cognitive activation, early mobilization, improved sensory stimulation, and improved nutritional and fluid intake. Important predictors of postoperative delirium included a low score on the Mini–Mental State Examination, advanced age, and preoperative infection.

Conclusion: The frequency of postoperative delirium in elderly patients with cognitive deficits can be lowered with nursing measures carried out by a specially trained nurse, close postoperative supervision, and cognitive activation.

The term “delirium” is used to describe all acute mental disturbances that have an organic cause and are accompanied by disorientation and cognitive impairment (1, 2).

With an incidence of 14% to 56%, delirium is the commonest complication in over 70-year-olds receiving treatment as inpatients (3), and is associated with a mortality rate of 25% to 33% (4). Dementia increases the likelihood of delirium, and is far and away its most important risk factor (5). Especially in medical and surgical wards and in intensive care, 50% of all patients are disoriented postoperatively (6). Delirium increases the length of hospital stay, the costs, the amount of care required, and the risk that the patient will be institutionalized (7–10).

In the past few years in Germany, some promising pilot projects have shown that the incidence of postoperative delirium on general hospital medical and surgical wards can be reduced by a variety of interventions (11–14).

Existing models, such as the procedures used at the St Franziskus Hospital in Münster, show that the incidence of postoperative delirium can be reduced if the patient has a single defined contact person for the duration of their hospital stay and is screened on admission for cognitive deficits (15, 16).

Non-medical interventions are important supportive elements of treatment that are not adequately utilized in the everyday management of delirious patients (17, 18). They include aids to orientation: a clock, a calendar, or a familiar photo can all have a supportive effect in the patient’s treatment. Protecting patients from stimuli is an important aid in non-medical treatment of delirium. This should include not changing the patient’s room and having no staff changes, so far as possible. Sensory aids for the patient such as glasses or hearing aids should be used. Adequate lighting is important, so that a proper sleep-wake cycle is ensured. Personal attention and the involvement of friends or relatives have a positive effect (19–21).

The aim of the present study was to answer the following questions:

The present study is something of a new departure in that the focus was, first, on cognitively impaired patients undergoing general surgical treatment in the context of a real-life mixture of patients, and, second, on non-drug, nursing interventions. We aim to show that delirium prophylaxis is not primarily a task for surgeons or physicians, but for trained nursing staff.

The methods used, especially the statistical analysis, are described in detail in the supplementary eMethods section.

The study was carried out in two general surgical wards of a teaching hospital providing standard care; one was designated the intervention ward and the other the control ward. A variety of medical and ancillary teams were responsible for patients’ treatment. The patient groups had similar demographic characteristics. The treatment teams were made up of surgeons, specialized surgical nurses, physiotherapists, and social workers. The two wards were similar in terms of numbers of nursing and medical staff per number of beds. In neither of the wards was there any special training in geriatrics or geriatric psychiatry.

During the first phase of the study (prevalence phase; March to August 2011), on both wards the number of over 70-year-olds who already showed cognitive impairment and confusion preoperatively was recorded. Socioeconomic data, diagnoses, physical diseases, and preoperative medication were also recorded. In addition, the following investigations or measurements were carried out pre- and postoperatively:

During the subsequent 10-month intervention phase of the study (September 2011 to June 2012), one of the two wards became the intervention ward, the other the control ward.

On the intervention ward, interventions were implemented in the following areas by the geriatric psychiatric nurse (delirium liaison nurse) pre- and postoperatively, according to the individual needs of the patients (Table 2):

The study included all patients admitted to the two surgical wards between March 2011 and June 2012, so long as they fulfilled the following criteria:

Patients with any of the following characteristics were excluded:

The study design was approved by the hospital ethics committee on 7 October 2010. The Figure shows the flow chart for included and excluded patients during both phases of the study.

The analysis performed to identify the prevalence and preoperative predictors of postoperative delirium included all patients in the study who were treated on either of the two surgical wards between March 2011 and June 2012 (n = 178). Mean patient age was 76.8 years, and 53.9% of patients (n = 96) were women. Patients’ preoperative characteristics are summarized in Table 3.

During the intervention phase, on the intervention ward the preoperative screening was used to derive a delirium risk on the basis of general factors favorable to confusion or delirium: attention deficit, pre-existing cognitive deficits (demonstrated using the MMSE), and the duration and extent of the planned surgery. For example, femoral neck fractures are associated with a very high risk of delirium.

The delirium liaison nurse determined the delirium risk independently of the surgical ward staff. On the basis of the determined risk, an individual intervention plan was set up. The following goals were set:

Table 2 shows the frequency with which the various interventions were actually used. For patients with postoperative delirium, an interventional support program adapted from the Hospital Elder Life Program (HELP) (31) (Box) was used.

In multivariate logistic regression analysis with forward selection, the variables age, MMSE, Barthel Index, and infections remained in the model. Only MMSE, age, and preoperative infections proved to be statistically significant (p<0.05). The individual results for these variables are summarized in Table 5.

Table 4 contains the descriptive statistics and test statistics of the preoperative characteristics in both groups. The intervention group had a higher proportion of patients with a Barthel Index <85 and higher preoperative NOSGER and MADRS scores. The proportion of patients who were admitted from an institution was higher in the intervention group than in the control group.

Delirium is a frequent condition in older patients on surgical or medical wards in general hospitals, and is associated with high consumption of health resources. The risk of postoperative delirium is particularly high in elderly patients with pre-existing cognitive deficits. Over the period of the present study, 20.2% of patients who received no intervention developed postoperative delirium. This agrees with figures published elsewhere (4).

Our results indicate that patients who develop postoperative delirium are different preoperatively to those who do not. Our data show that, especially, age, pre-existing infections, and the Mini–Mental State Examination score, which indicates existing cognitive deficits, are risk factors for postoperative delirium. The publications of Fischer and Assem-Hilger (32), Margiotta et al. (33), and Robinson et al. (9) support our findings.

Differences in preoperative functional status were also found between the patient groups, using NOSGER. In addition, it was noted that the risk of delirium was higher when patients had a preoperative Barthel Index <85, or lower level of education, or were admitted from an institution.

Whereas 20.8% of patients on the control ward during the intervention phase developed postoperative delirium, delirium was observed in only 4.9% of patients on the intervention ward (OR = 0.22; 95% CI: 0.05 to 0.98; p = 0.046). These results agree with those of Zaubler et al. (19), in whose study a HELP approach (31) was also followed, although this study was carried out in a medical ward. Unlike Zaubler et al. (19), who used only a historical control group for comparison, the present study included both an intervention and a (non-intervention) control ward during the intervention phase of the study, which increases the validity of its results. The present study also included validation, sleep improvement, cognitive activation, early mobilization, improved sensory stimulation, and nutritional and fluid intake during the investigation phase. We take this as a clear indication of the protective effect of such measures in preventing delirium.

This assessment also agrees with the findings of a recent meta-analysis of 14 intervention studies on non-drug prevention of delirium (37), which showed that multimodal non-drug delirium prophylaxis can reduce the incidence of delirium.

Some restrictions need to be observed when interpreting the present results. This was not a randomized, placebo-controlled study (RCT), but a service delivery study carried out in the setting of a general hospital.

All the calculated values show relatively wide confidence intervals, but this is probably because the patient population was quite small and only a moderate number of patients developed delirium.

We believe that if the medical staff caring for the patient understand the risk factors, this can have a critical effect in reducing postoperative delirium. Establishing a delirium liaison nurse, who carries out screening for risk factors for postoperative delirium preoperatively and cognitive activation of the patient peri- and postoperatively, could be an important step towards improving treatment outcomes in older patients undergoing surgery in general hospitals.

Nursing staff in particular would be trained by a delirium liaison nurse in screening for risk factors and would learn simple methods and tools for delirium prophylaxis, e.g., cognitive activation or validation. Without this, lack of understanding or ignorance on the part of medical staff could lead to an increased incidence of delirium. This is why it is so important for specific treatment guidelines to be integrated into the hospital clinical routine for nurses and doctors in training. We believe that employing a delirium liaison nurse could be an important contribution toward this.

The delirium liaison nurse could be effective not just through his or her own immediate clinical activity, but as part of a multi-professional team on a surgical ward would have a considerable educational effect on all members of the team (learning by watching) (40).

In our view, further studies with larger patient numbers are needed to establish the part played by the individual interventions in the reduction of postoperative delirium.

Manuel Heinrich and Eckehard Schlauß declare that no conflict of interest exists. 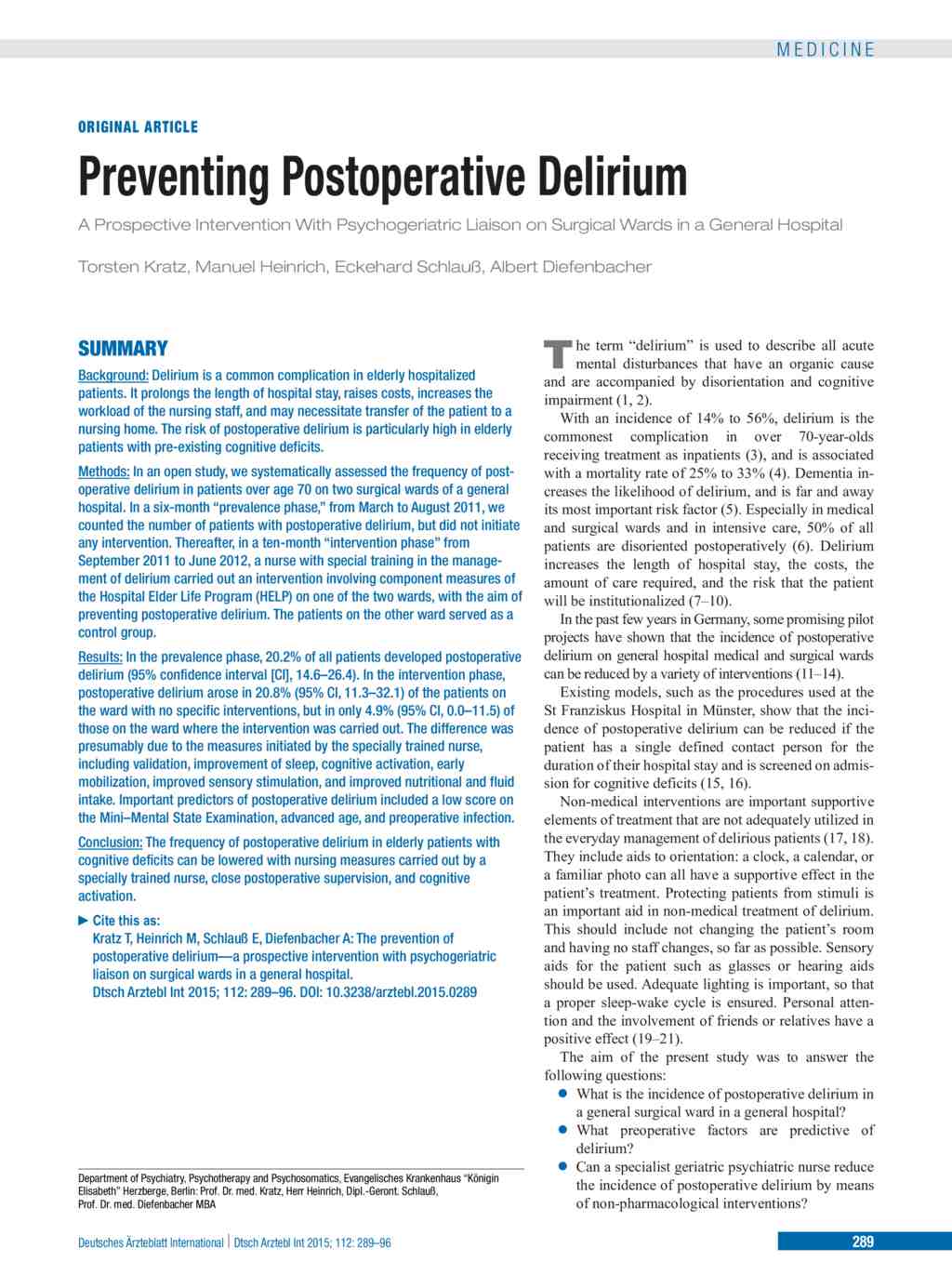