We thank our correspondents for their interest in our article on immunization rates at the regional level.

We agree with Dr. Lüder that the compulsory vaccinations in the former GDR are not the only reason for the differing immunization rates in the old and new German states. The alternative factors he lists are all plausible but were not investigated in our study owing to methodological constraints. We thank Dr. Krüger for pointing out the active commitment on pediatricians’ part as a crucial success factor, which is supported by our data.

In response to Dr. Hirte’s letter, we wish to point out that thus far no causal association has been identified between hepatitis B vaccination and autoimmune disorders. The frequency of visits to the doctor decreases the older children get. For this reason, a high immunization rate is more reliably delivered by means of the basic immunization program in infancy. The swap to an acellular pertussis vaccine (Pa) put an end to the adverse effects described for the whole-pathogen vaccine. Waning immunity over time after immunization remains a challenge; for this reason, booster vaccinations are required.

Unfortunately, vaccinated persons can still transmit the pertussis bacterium, which is an additional hindrance to limiting the spread of the disease. It is worth mentioning in this context that even the immunity conferred after the illness itself is limited to 15–20 years (1). The benefit of vaccination is a reduction in severe disease courses that may result in admission to hospital.

Studies have confirmed that contracting mumps lowers the rate of ovarian cancer in girls. However, most of the relevant studies were done at a time when the control group consisted mainly of unvaccinated women. The only study so far with a higher proportion of vaccinated women in the control group did not find any difference in the rate of ovarian cancers, although the manifestation of MUC1 antibodies, which has been credited with reducing the risk, does not occur in vaccinated subjects (2). Complications such as encephalitis, hearing loss, or oophoritis therefore constitute an indication for preventing infection, even in girls.

Since the varicella zoster vaccine was introduced the number of cases of infection necessitating admission to hospital has dropped significantly. The observed increase in cases of zoster infection is still not fully understood in terms of its etiology. However, one striking feature is an increase that happened years before the introduction of the varicella vaccine. Consequently, other risk factors have to be assumed to be possible causes. In spite of the waning immunity over time after vaccination, no increase in the incidence of varicella infections has been observed in adults thus far. This is also the case for the US, where the varicella vaccine has been available since 1995 (3).

The European Medicines Agency (EMA) is responsible for deciding on clinical trials before license approval is granted for medical drugs (4). According to Germany’s Act on the Prevention and Control of Infectious Diseases in Man (Protection against Infection Act), possible complications and harms occurring in the context of immunization are notifiable. The Paul Ehrlich-Institute collects such reports and publishes them annually.

Ms. Weitmann and Professor Hoffmann declare that no conflict of interest exists. 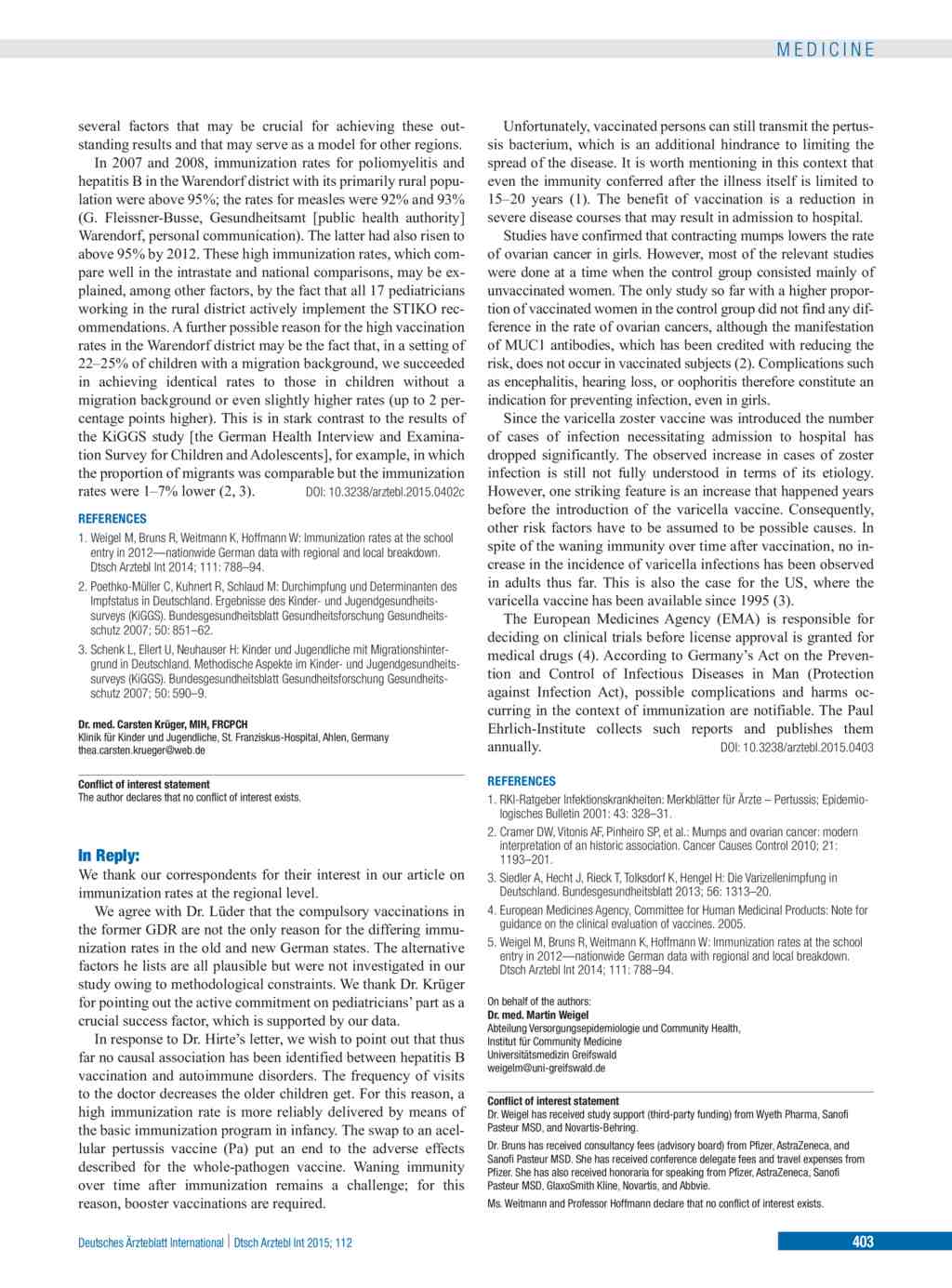