We have received an exceptionally large number of positive responses to our CME article (1). We also warmly welcome those critical comments.

We would like to thank Dr. Zilles and Prof. Grözinger for their valuable additions with regard to antipsychotic augmentation, the overall treatment plan, and especially maintenance ECT. We can agree with everything they have stated.

We fully understand Dr. Kinzes’ disappointment about the list of drugs that can cause depression which was only published in the supplement to the online version of our article. We had submitted the manuscript without this list, but were then asked by the reviewers and editors to hand one in. Unfortunately, we could not compile a truly reliable list as there is a puzzling abundance of drugs that may be relevant combined with a general lack of data regarding their potential to cause depression. Therefore, as discussed in the article, we are using a different approach: The key indicators that a medicine may have caused depression are the temporal relationship between the start of a pharmacotherapy and the onset of depressive symptoms, which needs to be established as precisely as possible when the patient’s history is taken, and, whenever possible, a treatment-free interval or a switch to another medicine that should be attempted. For most antihypertensive drugs, alternatives are available.

Mr. Sansoni sketches a sad picture of outpatient psychiatric management. The aim of our article was to encourage at least the psychiatrists to use medicines supported by reliable evidence in patients with treatment-resistant depression even if that requires addition effort. In internal medicine, close monitoring of pharmacotherapy is not uncommon, for example in patients receiving anticoagulants or immunosuppressants. Specialists in internal medicine consider this naturally and with competence as their sphere. Likewise, psychiatrists should be proud of using their core competencies. These include lithium treatment, treatment with MAO inhibitors and treatment control based on therapeutic drug monitoring (TDM). Fortunately, we know from our daily clinical experiences that this is the case in the majority of practices. By the way, attempts to generate scientific evidence to support the usefulness of differential indications for pharmacotherapy based on subtypes of depression, as applied by Mr. Sanson, have been unsuccessful.

The sexual side effects of selective serotonin reuptake inhibitors (SSRIs) highlighted by Professor Wenderlein are indeed a common problem in clinical practice. However, these are not explained by hypogonadism, but by serotonergic stimulation of 5-HT2 receptors. A particularly high prevalence of depression in a specific age group is, of course, not sufficient evidence to demonstrate its relationship with the decline in sex hormone levels. A temporal correlation is by no means a causal relationship, and there are numerous other biological and psychosocial changes that occur in people aged between 50 and 70 years. Naturally, hormone replacement therapy according to endocrinological guidelines has to be initiated in patients with hormone levels that are clearly too low (e.g. in case of overt hypothyroidism).

We would like to thank Dr. Zipper for highlighting the option of repetitive transcranial magnetic stimulation (rTMS). Its effects in the treatment of depression are, however, rather weak and significantly milder that those of ECT. Individual studies, such as the one cited by Dr. Zipper, are positive; older meta-analyses (2) arrive at very cautious positive conclusions; however, a current systematic review and meta-analysis (3) concludes: “rTMS generates very small improvements when used in the treatment of non-refractory depression. The results in treatment-resistant depression are somewhat better, but still reflect only minimal clinical improvement.“ Consequently, the recommendations of the S3-Guideline/National Disease Management Guideline Unipolar Depression (4) are as follows: “The evidence on repetitive transcranial magnetic stimulation (rTMS) [...] currently available is not sufficient to allow recommendations for its general clinical utility and usability.“

Prof. Bschor has received reimbursement of meeting participation fees and of travel and accommodation expenses from Lundbeck and AstraZeneca. He has received honoraria for lectures at continuing medical education events from Lilly, BMS, esparma (Aristo), Servier, AstraZeneca, Sanofi, and Lundbeck. Prof. Bschor is a regular member of the Drug Commission of the German Medical Association and also the spokesman for the psychiatric working group within it. He is a board member of IGSLI and President of the Berlin Society for Psychiatry and Neurology.

Prof. Bauer has served as a paid consultant for Alkermes, AstraZeneca, BristolMyersSquibb, Ferrer Internacional, Janssen, Lilly, Lundbeck, Otsuka, Servier, Takeda, and Novartis. He has received honoraria from UNI MED Verlag, Elsevier, Kohlhammer, and Springer for authorship of a publication relating to the topic of this article. He has received reimbursement of meeting participation fees from Servier. He has received payment for the preparation of continuing medical education events from AstraZeneca, BristolMyers Squibb, Ferrer Internacional, Lilly, Lundbeck, Otsuka, Pfizer, and Servier. He has also received payment for carrying out clinical trials on behalf of Lilly, Servier, and Astra-Zeneca. 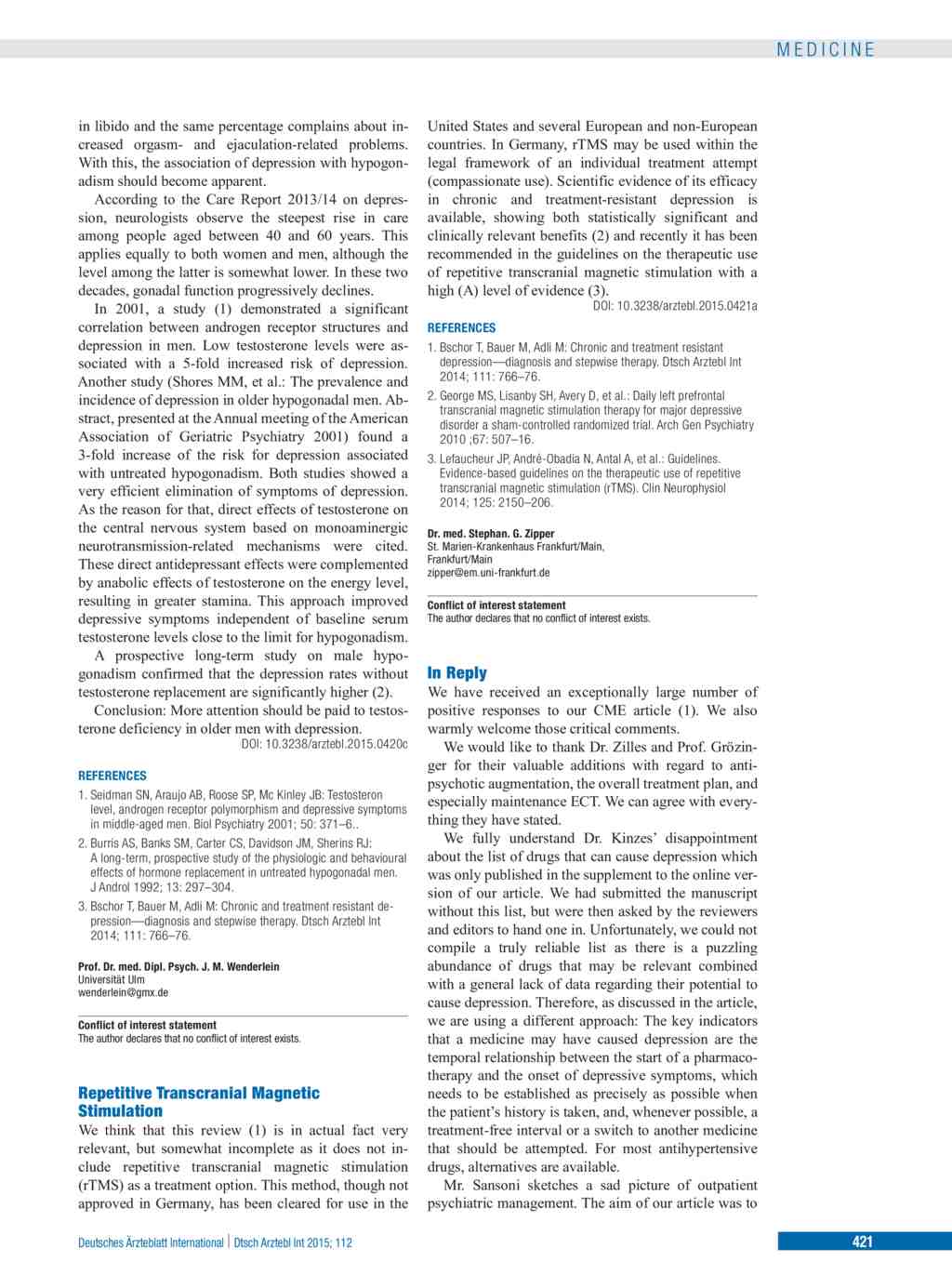