Our readers’ letters show that the topic is understandably the subject of controversial discussion, with each individual having to determine their own position in a differentiated fashion, and whose end result may be contrary. The scope of such an article does, however, not allow for shedding light on each and every facet in as comprehensive a manner as would be entirely appropriate for each individual aspect.

In the steering committee of the FertiPROTEKT network, we discussed at great length until 2011 whether we, as doctors with a primary focus on the fertility protection of cancer patients, should even take a position on cryopreservation in non-medical indications (social freezing). We had previously rejected this outright, especially in order not to narrow our focus, as Schumann writes, or suggest any business considerations. The reason for the subsequent intensified discussion and the publication of a position statement by FertiPROTEKT in 2012 (1) was the increasing amounts of mostly uncritical advertising of the method on diverse webpages in Germany and abroad. The article in Deutsches Ärzteblatt (2) is an extended version of our critical reflection that includes further aspects, in particular medical ones.

The method obviously cannot solve the problems that prompts women’s desire to freeze their eggs without any medical indication. One might discuss changes to workplace policies and other changes that might influence some of the problems, but whose timely implementation can realistically not be expected. To subsume the topic merely under the label of “self optimization” seems too simplistic and does, in our view, not do justice to the differentiated consideration that is required. After a long and critical discourse within the FertiPROTEKT network, we thought the time had come to tackle the topic in a matter of fact way and to provide support for women in order to balance the opportunities and risks of late pregnancy for mother and child on an individual basis. Women should be counselled in detail and in a differentiated manner about the medical issues, in order to enable them to assess their chances of success realistically and not succumb to unjustified expectations. The decision in favor of or against such a measure should accordingly be down to the women.

Prof. von Wolff was involved in the establishment of the FertiPROTEKT network, which collects and analyzes the registry data discussed in this article. He is a member of the steering committee of FertiPROTEKT. We aimed to explain the circumstances in which we could imagine social freezing in the individual case after a critical consultation.

Dr. Germeyer is a member of the steering committee of FertiPROTEKT.

Prof. Nawroth is a member of the steering committee of FertiPROTEKT. He has received reimbursement of travel costs from Merck Serono. 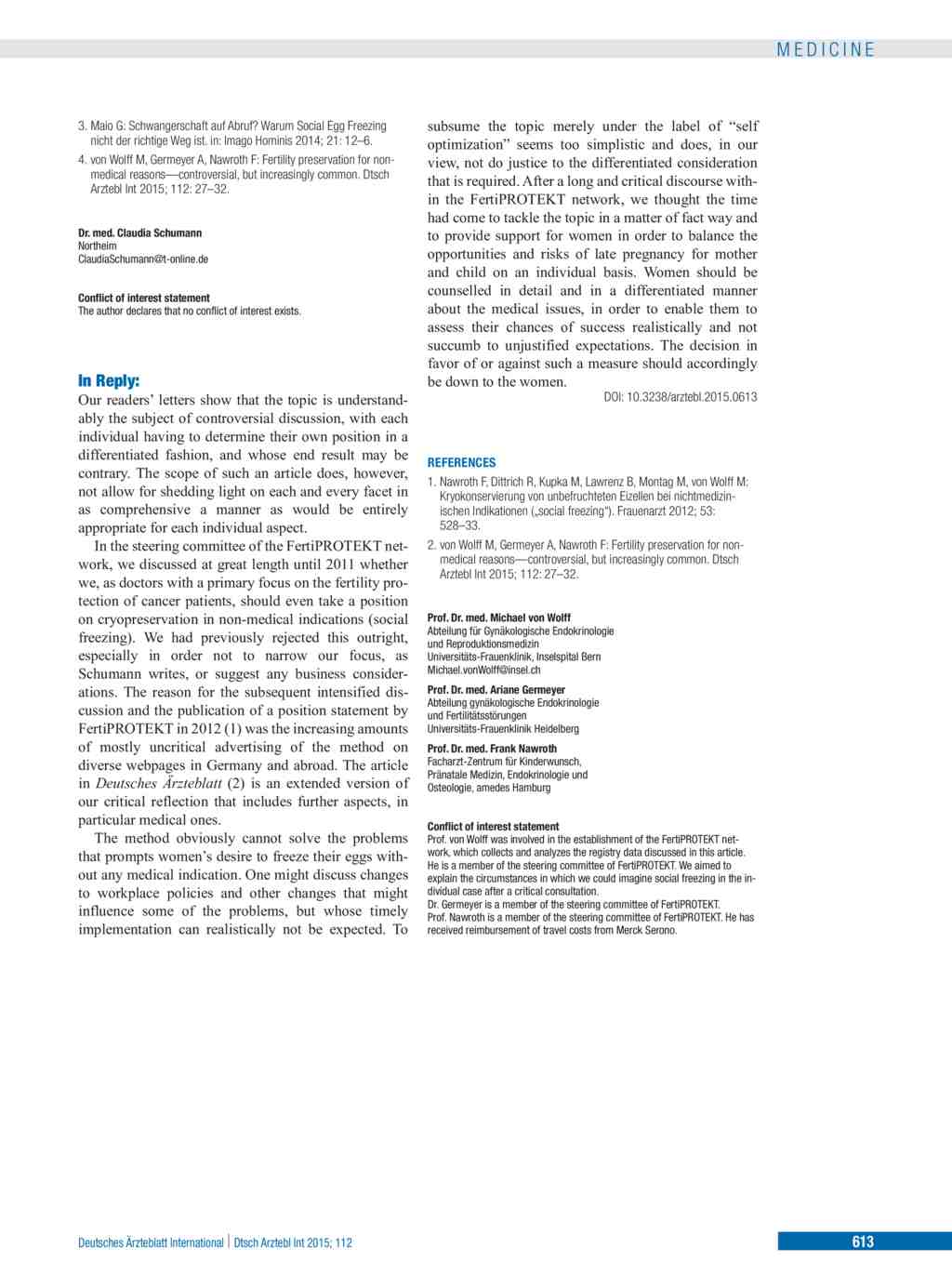