DÄ internationalArchive40/2015Shared Decision Making and the Use of Decision Aids

Shared Decision Making and the Use of Decision Aids

Background: In shared decision making (SDM), the patient and the physician reach decisions in partnership. We conducted a trial of SDM training for physicians who treat patients with cancer.

Methods: Physicians who treat patients with cancer were invited to participate in a cluster-randomized trial and carry out SDM together with breast or colon cancer patients who faced decisions about their treatment. Decision-related physician–patient conversations were recorded. The patients filled out questionnaires immediately after the consultations (T1) and three months later (T2). The primary endpoints were the patients’ confidence in and satisfaction with the decisions taken. The secondary endpoints were the process of decision making, anxiety, depression, quality of life, and externally assessed physician competence in SDM. The physicians in the intervention group underwent 12 hours of training in SDM, including the use of decision aids.

Results: Of the 900 physicians invited to participated in the trial, 105 answered the invitation. 86 were randomly assigned to either the intervention group or the control group (44 and 42 physicians, respectively); 33 of the 86 physicians recruited at least one patient for the trial. A total of 160 patients participated in the trial, of whom 55 were treated by physicians in the intervention group. There were no intergroup differences in the primary endpoints. Trained physicians were more competent in SDM (Cohen’s d = 0.56; p<0.05). Patients treated by trained physicians had lower anxiety and depression scores immediately after the consultation (d = −0.12 and −0.14, respectively; p<0.10), and markedly lower anxiety and depression scores three months later (d = −0.94 and −0.67, p<0.01).

In contrast to the use of decision aids, the evidence on shared decision making training programs is less clear. Two recent reviews on patient-reported outcomes (8) and health-care providers’ shared decision making strategies did not provide a uniform picture (9). Only a few studies have been able to find an effect on patient-reported outcomes or health-care providers’ shared decision making skills. Training in which decision aids for patients were also used was more effective (8). Our research group has developed two training programs in shared decision making within the context of Germany’s Federal Ministry of Health’s funding priority “The patient as partner in the medical decision-making process.” These cover depression (10) and chronic pain (11, 12). A comprehensive training manual has been published (13–16) but does not specifically target oncology and contains no strategies for communicating risk (17, 18).

This was a parallel-group, cluster-randomized trial. Data was gathered at two points in time: immediately following (T1) and three months after (T2) a consultation regarding a treatment decision. The study was entered in the German Clinical Trials Register (DRKS, Deutsches Register Klinischer Studien) under number DRKS00000539. The ethical approval of the Universities of Freiburg (no. 274/06) and Heidelberg (no. 377/2006) was obtained.

Initially, physicians providing inpatient and outpatient care for colon cancer and physicians working in breast cancer centers in Freiburg and Heidelberg were invited to take part in the study. Subsequently, all breast and colon cancer centers; all oncology, gynecology, and gastroenterology societies registered in Germany; and the German Association of Psycho-Social Oncology (DAPO) were contacted by telephone, mail, or e-mail. The study was also promoted at local and national conferences. The inclusion criterion for physicians was treatment of patients with breast or colon cancer during the study period. Patients could be recruited into the study if they were facing a treatment decision and if they gave their informed consent to participate. Exclusion criteria were medical contraindications for the investigated treatment decisions, secondary tumors, insufficient knowledge of German, and other medical contraindications.

Physicians in the intervention group participated in shared decision making training consisting of 12 training units, including a unit on the use of patient decision aids. Each decision aid concerns one of four preference-sensitive decisions that were selected by experts during the study preparation (eBox). Physicians in the control group provided treatment as usual. They received neither training nor access to decision aids during the study but did have the opportunity to undergo training in shared decision making after the study had been completed.

Physicians were randomized to the intervention group or control group at a ratio of 1:1 by an independent statistician, using a computer-based procedure (29). Randomization was stratified by sex, whether treatment was inpatient or outpatient, and the physician’s clinical experience. Patients were blinded to the group to which they had been randomized. Following randomization, all physicians were told which group they belonged to and how the study was to be conducted. Physicians participating in the intervention group recruited patients into the study after their training in shared decision making.

Physicians informed their patients of the study before a consultation regarding a treatment decision. Patients received written information on the study and signed a declaration of consent. Each patient’s subsequent consultation was recorded using a dictation device. Next, patients filled out the questionnaires and received the follow-up questionnaire three months later, together with a postage-paid envelope, by mail. A reminder was sent out four weeks later. No specific subsequent measures were taken to maintain patient blinding.

Cohen’s effect size d = 0.36 was expected (5, 30). Using a Bonferroni-corrected alpha error rate of 0.025 and a beta error rate of 0.1, assuming a coefficient of variation of 0.2, it was determined that the sample should consist of 50 physicians, who should recruit eight patients each, totaling 400 patients. In view of the clustered study design, data was analyzed using a linear mixed model. A random-intercept model was constructed with three predictors (treatment group, cancer type, interaction between treatment group and cancer type) and physician as cluster variable.

Because the sample was small, primary analysis was per-protocol. It included only physicians following the study procedure of the study group to which they had been randomized (intervention group vs. control group) and had recruited at least one patient for the outcomes to be investigated. Intention-to-treat analysis was also performed. Various strategies were used to impute missing data; all of these yielded comparable findings. Only the results of per-protocol analysis and one of the intention-to-treat analyses performed are reported here (eMethods). The significance level for the primary outcomes was set at 0.025.

Of the 33 physicians who recruited patients into the study, 17 treated breast cancer patients and 16 colon cancer patients. In total, 18 physicians were male. The mean age was 36.5 years (standard deviation: 7.5). The majority had never previously undergone any psychosomatic or psycho-oncological training (eTable 1). There were no substantial differences between the physicians in the intervention group and those in the control group.

Patients were recruited into the study between January 2010 and June 2012. Recruitment ended when all options for enrolling new physicians and patients had been exhausted. A total of 160 patients (nCG = 105; nIG = 55) participated, of whom 93 suffered from breast cancer and 67 from colon cancer (Table 1). Of the 160 patients, 98 (61.3%) completed the follow-up questionnaire three months after their consultation (Figure 1). Because of the difficulties in recruiting patients into the study, physicians were also asked to consider patients facing a decision other than the four treatment decisions selected in advance.

The per-protocol and intention-to-treat analyses did not reveal any significant differences between the intervention group and control group patients in terms of the primary outcomes (Table 2).

The small effect found may have been due to insufficient intensiveness and duration of training, as some studies suggest that there is a dose–effect relationship (33, 34). In addition, ceiling effects of the patient-reported outcomes used and pre-existing high quality of care in both groups may have played a role. The OPTION scores of the physicians in the control group, who did not undergo training, are comparable to those found in other noninterventional studies. The total OPTION scores of the physicians in the intervention group, in contrast, are lower than in comparable interventional studies (35). Examining the differences in individual OPTION items between the groups (Figure 2), both groups show similar score distribution, and overall the scores for the intervention group are slightly higher. The fears and expectations of patients in the two groups (items 6 and 7) were only slightly explored. This may indicate that physicians in the intervention group improved previously used shared decision making skills but had not made their conversational style substantially more patient-centered. The authors of earlier studies evaluating shared decision making training which also found no effect on patient-reported outcomes and a slight increase in shared decision making skills (18, 13, 34, 36) suspected that other factors such as length of consultation or a protected environment may have a greater effect than specific shared decision making skills (18, 36). In addition, the points of view of patients, physicians, and observers do not always coincide (37, 38). The choice of appropriate measuring tools to evaluate shared decision making interventions remains controversial. For example, patient-reported outcomes do not include which information was the basis for particular decisions. It is therefore impossible to rule out that patients made a particular treatment decision based on unrealistic expectations.

One of the greatest limitations of this study is its small sample size, in terms of both patients and physicians. This may have had an effect on the study’s randomization. Differences between the intervention group and the control group had to be verified using sensitivity analyses. Despite the great expense involved, only a small number of physicians and patients were ultimately recruited. The recruitment strategy had to be changed during the study, making it nationwide instead of local. It is also probable that individuals who were already positively disposed towards shared decision making and open to critical reflection on their own communication style were more likely to be recruited. The small sample size has made the statistical power of the study lower than planned.

We are currently conducting a follow-up study evaluating the efficacy of an e-learning platform and personalized coaching in shared decision making (39). Seminars and internships in shared decision making have also been integrated into a longitudinal communication curriculum in the revised iMED study program at the University Medical Center Hamburg-Eppendorf (abstract: Härter M, et al.: Das iMED-Curriculum am UKE. Klinische Untersuchungsmethoden und Kommunikationstraining [The iMED Curriculum at the University Medical Center Hamburg-Eppendorf: Clinical Research Methodology and Communication Training]. Abstracts on the 2014 DGPPN Congress in Berlin, 112). 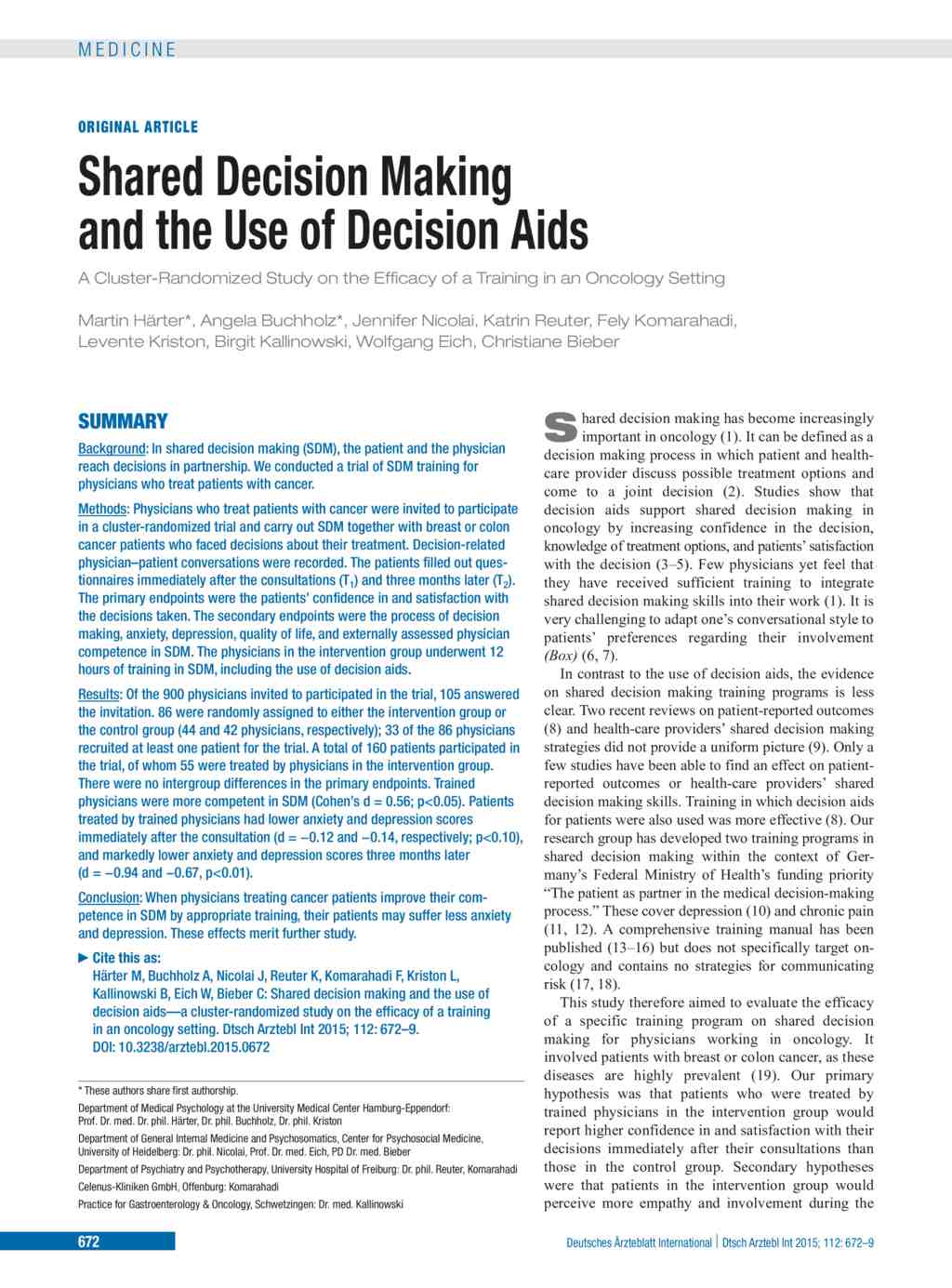