Integrative Therapy in Patients With Psychosis and Addiction

Integrated treatment in comorbid schizophrenic psychosis and addiction disorders strengthens patients’ motivation to remain abstinent and their satisfaction with the treatment, and reduces their consumption behavior in the short term. This is the conclusion of a randomized clinical study reported by Gouzoulis-Mayfrank and colleagues in this issue of Deutsches Ärzteblatt International (1).

The study is of particular importance because psychiatric therapeutic research is still far too often oriented towards individual cases of single-diagnosis functional impairments, which is clinically neater but rare in practice. In reality, about half of all patients who develop psychosis also experience a comorbid addition disorder—mostly tobacco or alcohol dependence—at least once in their lives (2). This large group of patients with a dual diagnosis presents a great challenge to conventional psychiatric or addiction-therapeutic services because of the multiple interactions between symptoms (3, 4).

Evidence from international studies shows that the occurrence of alcohol problems in patients with schizophrenic psychosis is associated with a relatively poorer treatment outcome and rather tends to take a chronic course (5, 6). Neurobiologically this is plausible: according to the multidimensional approach to neurobiological psychiatric research that is the subject of current discussion (7), there are indications that people with alcohol addiction and patients with schizophrenic psychosis have reduced neuronal activation in the so-called reward circuit (ventral striatum) when confronted with environmental stimuli that predict a reward at a later time (8).

These changes in the expectation of being rewarded, which are different in terms of detail, can be intensified in a setting of comorbid addiction disorder and schizophrenic psychosis and can result in even more pronounced impairments of a person’s emotional state (9).

In routine clinical practice it is important to know that in persons with alcohol dependence, reduced dopaminergic function occurs after detoxification, which is apparently made worse by administration of neuroleptic drugs, which makes such patients more prone to relapse (10). Unfortunately, detailed studies of the adverse effects of neuroleptic treatment in patients with combined psychosis and alcohol dependence are lacking. The available studies were conducted in alcohol-dependent persons without psychotic comorbidity and indicate that the medication that is given as standard treatment for schizophrenic psychosis may have a negative effect on the course of the addiction disorder (9, 10).

Consumption of cannabis and stimulants in psychotic disorders

Such effects have implications for patients’ adherence to treatment, their motivation to remain abstinent, and their quality of life. Special problems arise for treatment planning, which may be countered by an easy-access integrated treatment approach, which the Gouzoulis-Mayfrank working group developed years ago, and which includes psychoeducational and behavioral therapeutic elements (3).

As this approach was established in a general psychiatric hospital, it can easily be transferred and implemented into routine clinical practice in other hospitals.

Follow-up care is important, however, as the most important therapeutic effect of the intervention is a reduction in consumption behaviors, which in the present study was observed after 3 months, but not after 6 and 12 months. Because of the complex symptoms, this was rather what was to be expected.

As the authors rightly point out, their precedent-setting study militates against the widespread therapeutic nihilism and supports the idea of setting up person-centered integrated treatment programs with psychosocial and psychotherapeutic elements, which take the complex impairment patterns of our patients seriously and treat them accordingly.

The study by Gouzoulis-Mayfrank and colleagues (1) illustrates the difficulties in dealing with patients with psychosis and comorbid addiction. However, the results give no reason to succumb to fatalism: although doctors and patients should not set their hopes too high, something can be done—for example, by applying manual-based treatment, such as used by Gouzoulis-Mayfrank et al.

The most important step is to recognize the dual burden on the patients and to not see one disorder as a secondary outcome of the other. The crucial approach is to understand the coexistence of the two disorders and their resulting mutual interactions as an independent problem. 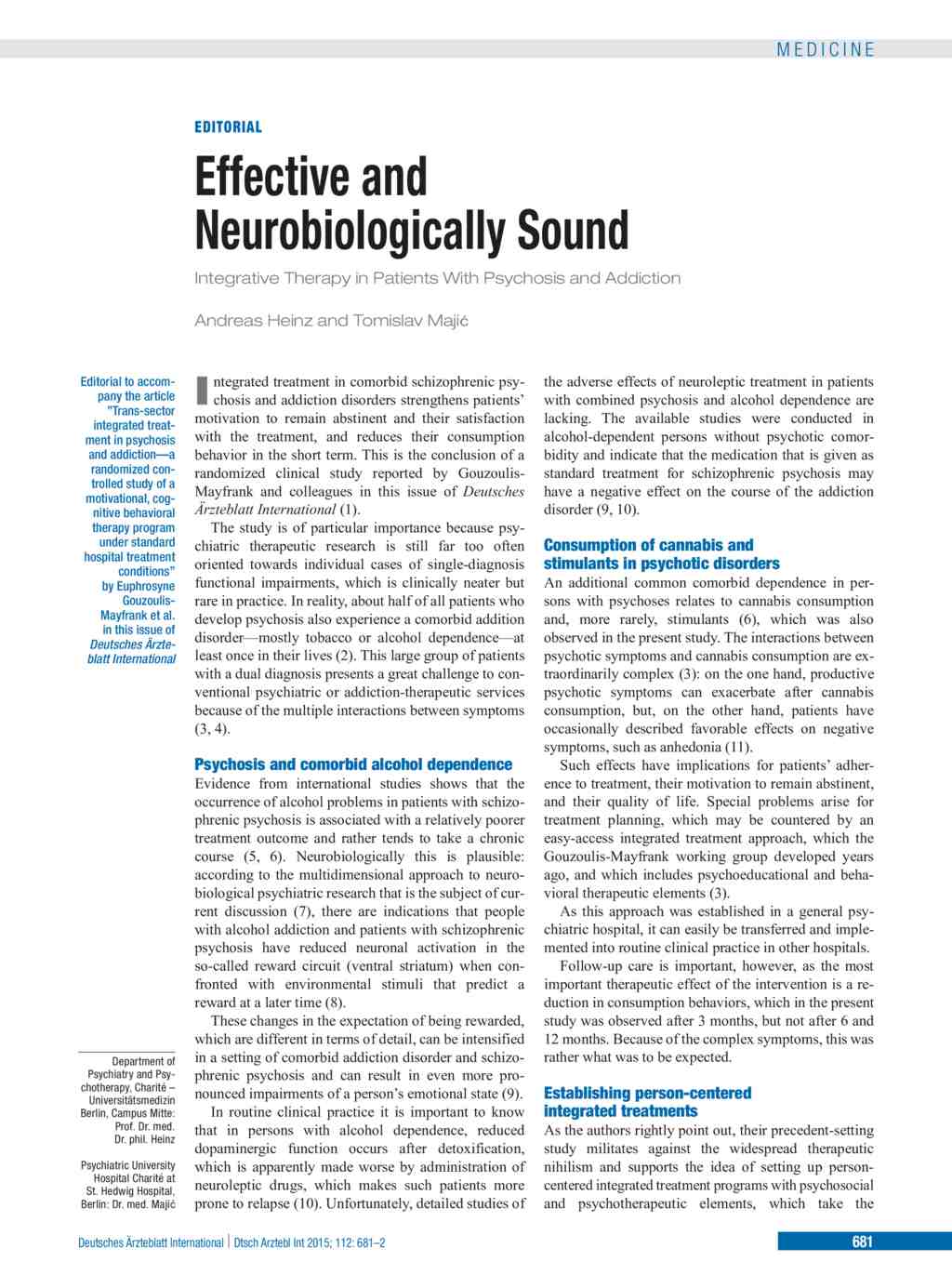