The Treatment of Non-Traumatic Meniscus Lesions

Background: Most meniscus lesions are of non-traumatic origin. The indications for partial meniscectomy are controversial.

Results: Of 6870 articles retrieved by the literature search, we were able to include six in this systematic review. Five trials showed no difference between the clinical outcomes of patients who underwent arthroscopic partial meniscectomy and those who underwent control treatment (arthroscopic lavage, physiotherapy, glucocorticoids). In three trials, however, symptoms improved in 21–30% of the patients in the physiotherapy group only after they underwent arthroscopic partial meniscectomy (crossover design). In two trials, the percentage of patients who crossed over from one treatment arm to the other was markedly lower; in one, the frequency of crossing over was not reported. In one RCT, the patients who underwent arthroscopic partial meniscectomy had significantly less pain and other symptoms. Five of the six trials had acceptable scores for method, but all had weaknesses. These mainly concerned the description of the surgical techniques and the failure to take account of analgesic use—in particular, the use of non-steroidal anti-inflammatory drugs (NSAIDs).

Conclusion: For most patients with non-traumatic meniscus lesions, surgical and non-surgical treatments seem to be of equal value; only one of the six included trials revealed lower pain and symptom scores after arthroscopic partial meniscectomy. In multiple trials, however, the crossover analysis showed that non-surgical treatment fails for some patients. These patients may benefit from arthroscopic partial meniscectomy. Further trials are needed to better define this subgroup of patients.

Meniscal tears can cause pain or locking of the knee joint and prevent those affected from participating in sporting activities, while at the same time reducing their quality of life (1–5). Radiological studies have shown that osteoarthritis can be a long-term consequence of meniscal injury (2, 6–8).

The majority of meniscal injuries occur without adequate trauma (3, 4, 9). The prevalence of non-traumatic meniscus lesions is 31% according to the Framingham study (9). Arthroscopic partial meniscectomy has been the first-line treatment for these injuries for a long time (3, 4, 10–12) and positive clinical outcomes have been demonstrated for this procedure in several cohort studies (10–12).

Partial meniscectomy has become one of the most common orthopedic procedures due to the high prevalence of non-traumatic meniscus lesions in the general population and the widespread use of magnetic resonance imaging (MRI) which can detect these tears (13–16). According to DRG (diagnosis-related groups) statistical data, approximately 300 000 meniscus surgeries were performed in German hospitals in 2013 (17).

The aim of this review is to systematically analyze all available randomized controlled trials evaluating the efficacy of arthroscopic partial meniscectomy in patients with non-traumatic lesions.

Since previous non-randomized studies have demonstrated benefits for a surgical treatment of meniscus lesions (10–12), we put forward the hypothesis that there is a subgroup of patients that benefit from surgery.

Between September 30, 2014 and December 22, 2014, a systematic search in the PubMed database was performed in accordance with PRISMA guidelines to identify articles related to the treatment of non-traumatic meniscus lesions (21, 22). This study was prospectively registered (www.crd.york.ac.uk/PROSPERO; no.: CRD4201401–3957).

For the literature search, several keywords were used: meniscus, arthroscopic partial meniscectomy, meniscus surgery. The references of any matching studies identified were reviewed to find further relevant publications. The primary search was conducted by one of the authors (WP).

The inclusion criteria for this systematic review were:

The eligibility of publications was assessed on the basis of their abstracts. Where the abstract indicated that the study met the inclusion criteria, the entire article was read. In a joint conference it was decided whether a study was accepted and analyzed or rejected (reviewers: WP, AA, SK). Studies not meeting all inclusion criteria were excluded from this review. There were no limitations regarding the date of publication. All three reviewers had to agree upon the inclusion of a study. Articles based on earlier systematic reviews and meta-analyses were not excluded.

Where two separate studies of the same authors but with different follow-up periods were identified, only the study with the longer follow-up period was included (21). However, duplicate publications, appendices and study design–related publications were used for the purpose of methodological analysis.

The following primary endpoints were analyzed:

A systematic analysis of the following processes which may be associated with limitations was performed:

For a detailed description of the methodology, see eMethods.

The search results are shown in the Figure. Detailed information about the study designs is provided in Table 1. The inclusion and exclusion criteria of the six studies analyzed are listed in Table 2.

At the time of study inclusion, no differences between the clinical scores in the compared groups were found in any of the studies (Table 3).

At the last follow-up examination, five studies found no statistically significant differences in clinical outcomes between patients treated surgically and non-surgically (Table 3). However, in one study patients treated with arthroscopic partial meniscectomy had significantly less pain (KOOS Pain subscale) after three and twelve months and less symptoms (KOOS Symptoms subscale) after twelve months (14). The KOOS Pain subscale was used as a primary endpoint in two further studies. In these studies, no differences were observed after one and five years (26, 27).

Two studies reported that the clinical scores prior to the switch had not improved compared with those at the start of the study (26, 27). Herrlin et al. (26) revealed that patients who switched had significantly poorer scores in the KOOS subscales Pain, Sport/Rec and Quality of Life, as well as in the Lysholm score and on the visual analogue scale for pain (during activity). Likewise, in the METEOR study (24) patients who switched had shown no improvement in the WOMAC (physical function) score. After surgery, their scores improved to the same level observed among patients who underwent primary partial meniscectomy (26, 27).

Subgroup analyses were performed in four studies to evaluate the impact of factors with the potential to influence the outcome after partial meniscectomy. The clinical outcome was neither influenced by the degree of osteoarthritis (19, 27) nor by the presence of locking symptoms (14, 27).

Table 4 shows the results of the study quality analysis incorporating the Jadad score, Coleman score (methodology) and the CONSORT checklist.

Table 5 shows the results for the classification of the control of surgical process quality, the exclusion of other surgical treatments, the use of analgesics, including NSAIDs, and of corticosteroids. A major limitation was that none of the studies controlled for the use of pain medications, including NSAIDs (Tabelle 5).

The use of non-specific and non-validated scores in the studies included in this review were another relevant limitation (for example, Lysholm, WOMAC and Oxford Knee Score [OKS]). Further limitations are described in the eMethods.

In this systematic review, only one study demonstrated advantages of arthroscopic partial meniscectomy over treatment with physiotherapy (14). All other studies found no differences between the treatment groups (19, 26–29).

Apparently, the types of meniscal tear have an impact on the response to surgical and non-surgical treatment. The only study not reporting a switcher rate included only patients with horizontal meniscus lesions (29). This indicates that horizontal lesions show good response to non-surgical treatment (29). Herrlin et al. (26) investigated the types of tears present in patients who switched from the physiotherapy group to the arthroscopy group. In their study, 8 of 13 switchers had flap tears. Flap tears are associated with a risk for mechanical symptoms. These observations show that patients with flap tears benefit from arthroscopic partial meniscectomy.

In the study of Gauffin et al. (14), all patients had to be treated preoperatively with physiotherapy. Consequently, patients selected for this study would rather not have responded to physiotherapy.

In the subgroup analyses of the various studies, the outcome was not influenced by age (14), the presence of mechanical symptoms (locking) (14), the stage of osteoarthritis (19, 27), or the acute onset of symptoms (14, 19).

Study quality analysis yielded acceptable results for five of the studies included in this review. Only one study had poor results in all three scores (28). Its results should be interpreted with caution.

In some studies, the description of the surgical technique is worthy of criticism. Since intraoperative complications, such as iatrogenic injury to cartilage and resection of too much or too little meniscal tissue, influence the postoperative result, unclear description and standardization of the surgical technique used is of concern (32, 33). Additionally, further arthroscopic interventions, such as shaving of articular cartilage, notchplasty and partial synovectomy, were only excluded in the FIDELITY study (19). Another point of concern is that there was no control of surgical process quality in any of the studies included in this review. Future randomized controlled studies evaluating surgical treatments should include these factors.

Another weakness is that the use of pain medication, including NSAIDs, was not documented in any of the studies analyzed. Thus, the results in either of the two treatment groups could have been masked by the use of NSAIDs. The gastrointestinal side effects of NSAIDs are well known (34).

A further shortcoming of the studies analyzed is the lack of generalizability which is a typical limitation of randomized controlled trials. Of all eligible patients, only 26% could be included in the METEOR study and only 15% in the FIDELITY study. Hence, caution is advised when applying the results to the population as a whole (27).

Another point of concern is that in three studies the Lysholm score was used as a primary endpoint. This score is not validated for two of the national languages (Finnish and Korean) commonly spoken in the respective studies. In addition, Briggs et al. showed that the Lysholm domains of limp, instability, support, and locking had excessively high ceiling effects (>30%) for meniscus injuries (35). Similarly, floor effects were described for KOOS when it was used among patients with meniscus injuries (36).

Further limitations included lack of information about the distribution of prognostic factors, such as extrusion, subchondral edema, varus malalignment, and root injuries (37–39).

This systematic review has some limitations too. Because of the heterogeneity of the scores used in the studies, no meta-analysis could be performed. In addition, the low number of included studies (only six randomized controlled trials [RCTs]) could be considered a limitation which may introduce a systematic bias. Further clinical studies are needed to more precisely characterize the subgroup of patients benefiting from arthroscopic partial meniscectomy. With regard to the evaluation of treatment variables, we focused on the surgical treatment group. For physiotherapy, similar difficulties were found. Gauffin et al. (14) reported that only 53% of patients completed the exercise diary and on average only 19 of 24 training sessions were actually performed. It should also be noted that all analyzed articles were focused on the medial meniscus. No conclusion can be drawn regarding the treatment of lateral meniscus lesions.

Due to the variability of the publications on this topic, it is not possible to reach a clear conclusion at present. 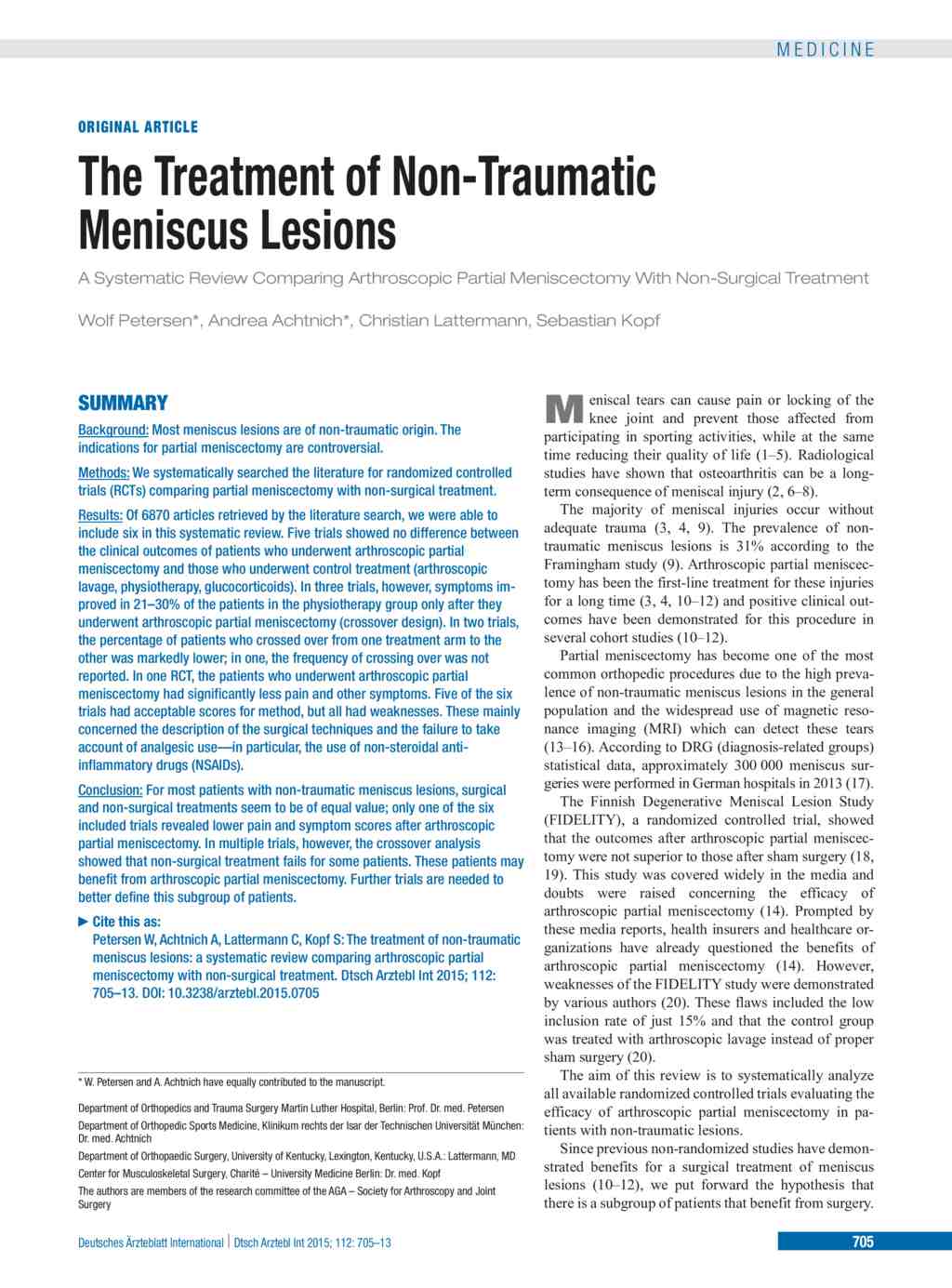