Background: Atrial fibrillation is the most common type of cardiac arrhythmia and is associated with elevated rates of stroke, heart failure, hospital admission, and death. Its prevalence in the overall population is 1.5% to 2%. To convert atrial fibrillation to sinus rhythm, cardioversion is needed.

Methods: This review is based on pertinent articles published from 2004 to December 2014 that were retrieved by a selective PubMed search employing the terms “atrial fibrillation” and “cardioversion.”

Conclusion: The main risks of cardioversion—thromboembolism and clinically significant hemorrhage—occur in 1% of cases or less (in the first 30 days after treatment) if the procedure is carried out as recommended in therapeutic guidelines. Serious complications still occur, but they are rare.

The signs and symptoms of atrial fibrillation can vary widely. Common complaints include:

However, these complaints may also be caused by other concomitant diseases (3).

To assess the risk for embolism and stroke in patients with atrial fibrillation, the CHA2DS2-VASc score was introduced.

VA = vascular disease, such as status post myocardial infarction, and

Two points are scored for each of the following: age >74 years and status post stroke (S2).

The aim of this paper is to present the current state of knowledge on cardioversion in non-valvular atrial fibrillation. Using the key words “atrial fibrillation“ and “cardioversion,“ a literature search was conducted in the PubMed database, covering the last 10 years up to December 2014.

Indications for the restoration of sinus rhythm in atrial fibrillation

None of the large studies on cardioversion in atrial fibrillation conducted so far was able to demonstrate improvements in prognosis for the hard endpoints ”death“ and “stroke rate“ (5–9). However, these studies included only very few patients younger than 60 years of age. Cardioversion is thus primarily aimed at improving existing symptoms. The Box shows the indications for cardioversion as recommended in the guidelines (4). In a 2012 survey of 57 electrophysiological centers in Europe, 75% of hospitals reported to perform more than 100 cardioversion procedures annually (10). According to data from a prospective European registry, treatment for maintaining sinus rhythm is provided for approx. 60% of patients with atrial fibrillation (between 48.7% in Italy and 72% in France), with 18.1% of patients receiving electrical cardioversion and 19.5% pharmacological cardioversion (11).

Anticoagulation and/or transesophageal echocardiography before cardioversion

Before cardioversion, anticoagulation therapy for 3–4 weeks or transesophageal echocardiography are recommended to ensure the absence of left atrial thrombi (4, 12). In patients with recent onset of atrial fibrillation, a thrombus is detected in approx. 10 and 0.6% of cases in the left and right atrial appendage, respectively (13). In these patients, cardioversion should only be performed after dissolution of intracardiac thrombi by means of effective anticoagulation.

Anticoagulation in cardioversion of atrial fibrillation

Etiology of thromboembolism after cardioversion

Heparins, vitamin K antagonists or novel oral anticoagulants can be used to ensure effective anticoagulation at the time of cardioversion, while aspirin does not offer adequate protection. With unfractionated heparin, an initial intravenous bolus of 60–80 units/kg body weight (BW) is followed by intravenous therapy aimed at extending the activated partial thromboplastin time to about 50–70 seconds (21). Adequate anticoagulation for cardioversion can also be achieved with enoxaparin at a dose of 1 mg/kg BW subcutaneously twice daily (22). Certoparin is another low molecular weight heparin which has been used (23). Effective anticoagulation using a vitamin K antagonist (e.g. warfarin, phenprocoumon) is thought to be achieved at international normalized ratio (INR) values in the range of 2 to 3 (21). With cardioversion, an INR >2.5 appears to better prevent thromboembolic events (24). Rivaroxaban is the first novel oral anticoagulant to be compared with vitamin K antagonists in a prospective study on cardioversion (mostly electrical). About 1000 patients received rivaroxaban in a dose of 20 mg/d (creatinine clearance >50 mL/min) or 15 mg/d (creatinine clearance 30–49 mL/min) in two strategies (long or short pre-treatment) or a vitamin K antagonist (25). Rivaroxaban was administered orally between three weeks and, at the latest, four hours before cardioversion. Two strokes (0.2%) and one fatal hemorrhage were observed. No significant differences between rivaroxaban and vitamin K antagonists were found for the endpoints of this study. Post-hoc subgroup analyses of the large pivotal studies on novel oral anticoagulants indicate that dabigatran (26) and apixaban (27) may also be effective anticoagulants in a cardioversion setting. As yet, no prospective data on these agents are available.

In clinical practice, it is easier to attempt pharmacological cardioversion as it does not require anesthesia. The European guidelines for the management of atrial fibrillation (4) list as drugs recommended for pharmacological cardioversion amiodarone, flecainide, ibutilide, propafenone, and vernakalant; however, ibutilide is not available in Germany and vernakalant was granted limited marketing authorization (Table 1).

Complications after cardioversion of atrial fibrillation

In Table 2, the main complications of cardioversion reported in studies with more than 1000 patients are listed, primarily related to thromboembolic events, bleeding and arrhythmia. Complication rates are typically <1% of patients treated; however, individual patients may experience serious adverse events.

What thromboembolic risk is associated with cardioversion despite anticoagulation?

Should patients with interventional or surgical closure of the left atrial appendage receive anticoagulation for cardioversion?

With no pertinent studies available, this question cannot be answered. In case no anticoagulation therapy is initiated, it should at least be ensured that the left atrial appendage is completely closed (e4) and no thrombi are present in the left atrium. 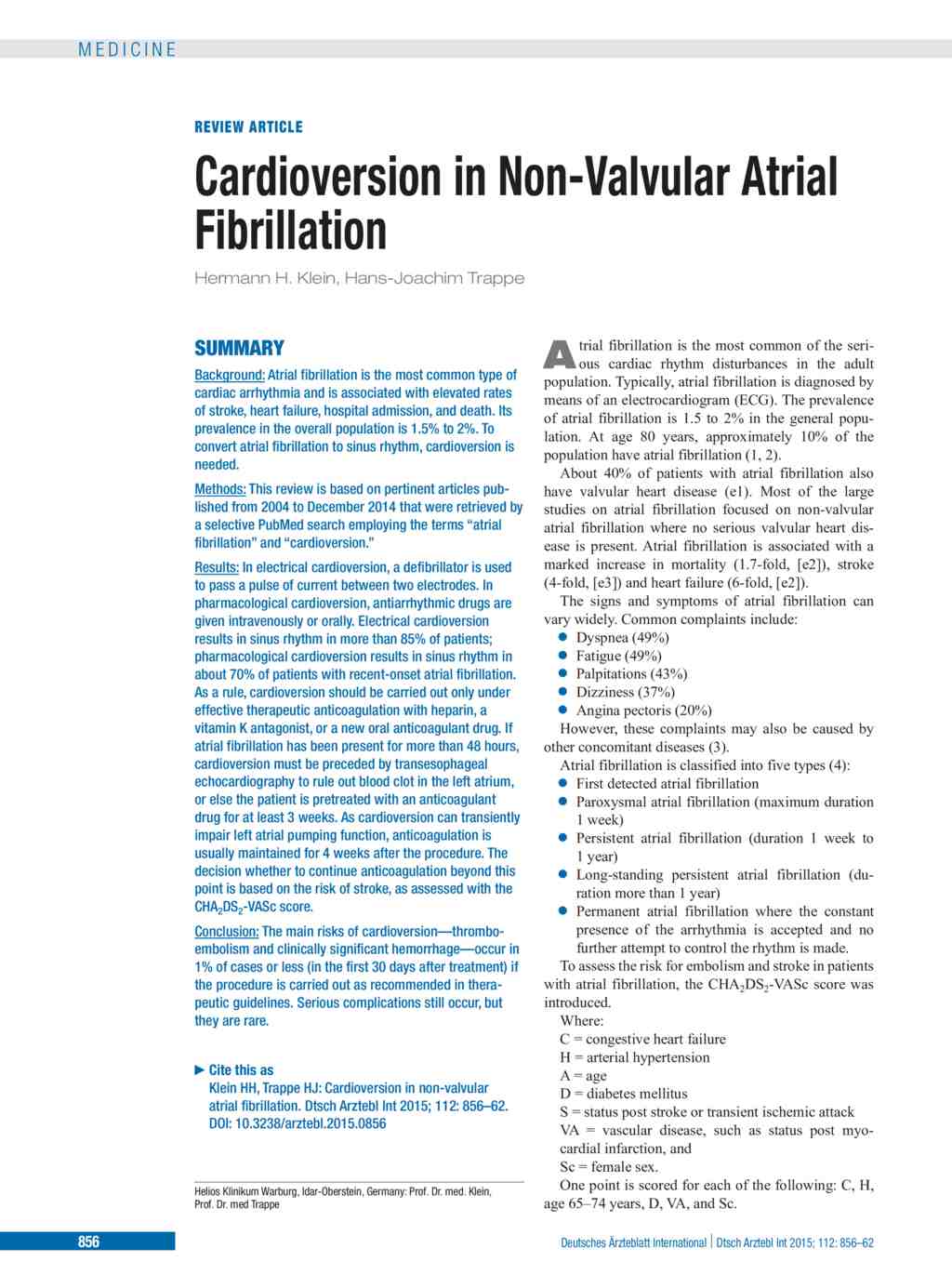