For a long time, there have been indications of excess mortality associated with the use of digoxin (1), albeit when used in stable chronic heart failure. In patients in the acute phase of heart failure, digitalis preparations are given primarily not for their inotropic effects but because of their negative dromotropic effects in absolute tachyarrhythmia, so their range of application in this setting has been restricted. In progressive chronic heart failure of NYHA stages III and IV, digitalis preparations do, however, have a positive effect on symptom improvement as well as in terms of reducing rehospitalizations and can be considered on an individual basis.

Further developments and increasing experience in using temporary mechanical circulation support systems allow their use in different decision scenarios in cardiogenic shock—for example, as bridge-to-diagnostics, bridge-to-bridge, bridge-to-recovery, and bridge-to-transplantation. We thank Spiliopoulus et al. and Hennig et al. for pointing out, firstly, the timely use in order to prevent irreversible multiorgan failure in cardiogenic shock, and, secondly, the need for circulatory support before, during and after coronary revascularization after infarct-associated cardiogenic shock. Established or promising areas of use for ECMO are, furthermore, fulminant myocarditis, shock after massive pulmonary embolism, therapy-refractory ventricular tachycardias or atrial fibrillation, and support to recovery after heart transplantations and after heart surgery. However, mortality in individual areas of application remains high, at 58% (2). Factors with a poor prognosis even when ECMO therapy is administered are chronic renal failure, pre-existing multiorgan failure including long periods of ventilation, congenital heart diseases, low-amplitude pulses, and low serum bicarbonate concentrations, as well as prior cardiopulmonary resuscitation. Scores have been suggested for the purpose of assessing the survival probability when using ECMO, but these require further evaluation (2). Similarly, large randomized controlled studies that characterize the optimal patient population for the use of ECMO are lacking, as are cost-benefit analyses of this intervention. In spite of mobile ECMO teams the systems can currently not be offered to all patients because they are not ubiquitously available in a timely fashion (3). Mechanical support systems are a promising solitary building block in the total concept of therapy of cardiogenic (infarct-associated) shock (4).

Prof. Felix has served as a paid consultant for Novartis and Cardioventris. He has received reimbursement of congress participation fees and lecture honoraria relating to continuing medical education events from Novartis, Bayer, Berlin Chemie, Cardioventis, and Servier. He has received honoraria in a third-party account for carrying out clinical studies relating to the topic of this article, as well as financial support for a research project that he initiated, from Bayer, Novartis, and Medtronic.

Prof. Empen, Prof. Dörr, and Dr. Hummel state that they have no conflict of interest. 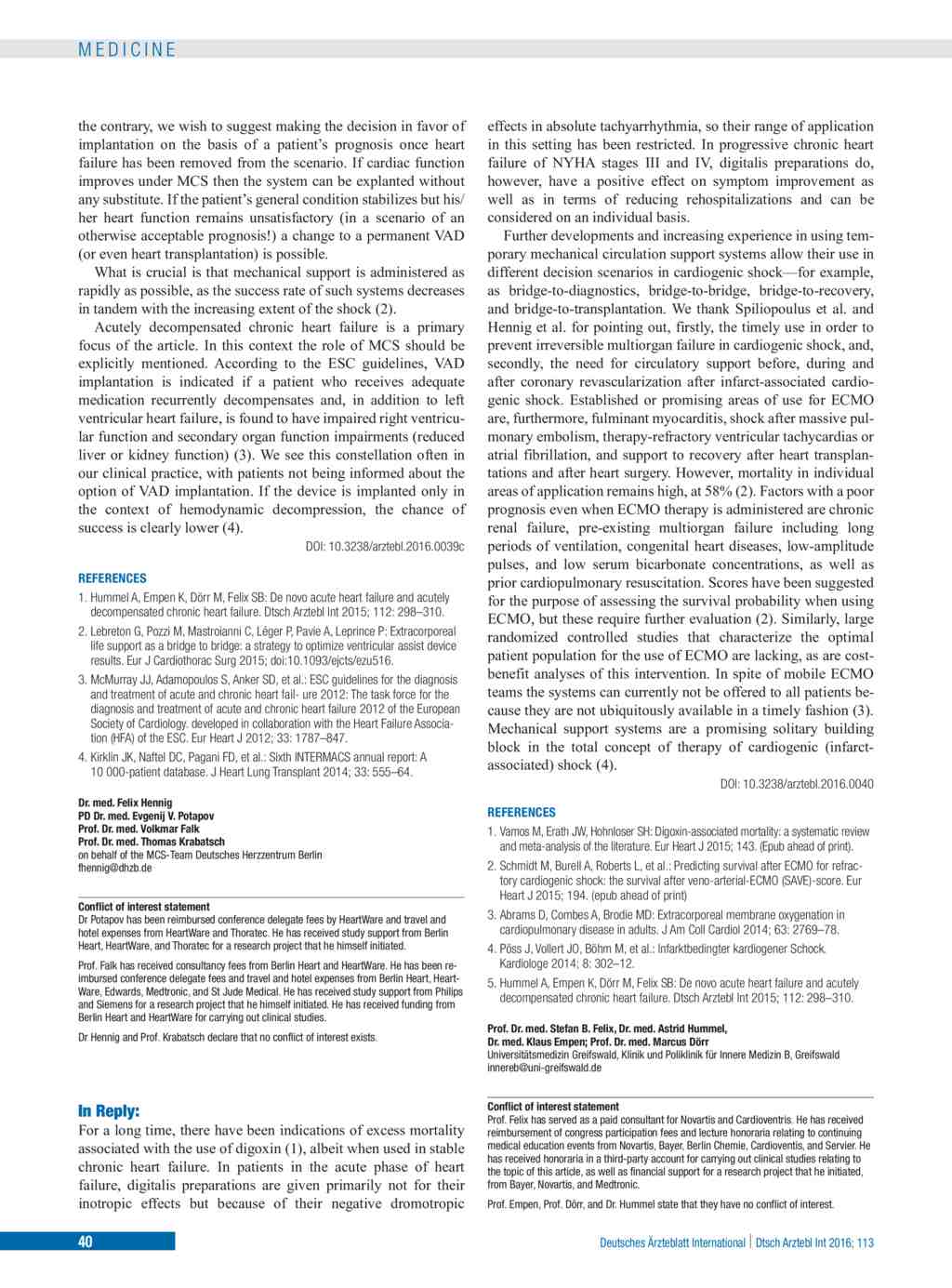