The Clinical Effectiveness of Pneumococcal Conjugate Vaccines: A Systematic Review and Meta-analysis of Randomized Controlled Trials

A systematic review and meta-analysis of randomized controlled trials

Background: Streptococcus pneumoniae is responsible for approximately 1.6 million yearly deaths worldwide. An up-to-date evidence base on the effects of pneumococcal conjugate vaccines (PCVs) on infectious diseases and mortality in any population or setting regardless of age or health status is currently lacking.

Streptococcus pneumoniae (Pneumococcus) is globally recognized as one of the most important pathogens causing considerable morbidity and mortality (1). The World Health Organization (WHO) estimates that Pneumococcus is related to 1.6 million yearly deaths worldwide, most of them occurring in low-income countries (1, 2). Children under 2 years of age, the elderly, and people with immunodeficiency are at highest risk (1, 2, 3).

Previous systematic reviews (6, 7, 8, 9, 10, 11, 12, 13) evaluated the evidence base for PCVs in the prevention of infectious diseases but only few performed meta-analyses (6, 7). A recent systematic review (10) focused exclusively on the prevention of otitis media as an outcome in under 12-year-olds. PCVs have already been extensively studied (14, 15, 16, 17) and they were declared safe by the WHO (18). However, an up-to-date summary and meta-analysis of the effectiveness of PCVs on a broad range of patient-centered outcomes in a variety of populations is currently lacking.

We conducted a comprehensive systematic review and meta-analysis to quantify the effects of PCVs in any population independent of age or health status compared with placebo, no vaccination, or other non-pneumococcal conjugate vaccines on all-cause mortality and all-cause, pneumococcal, and vaccine-specific infectious diseases.

We considered randomized controlled trials (RCTs) which compared PCVs given alone or in combination with other vaccines versus placebo, no intervention or other, non-pneumococcal conjugate, vaccines in any population irrespective of age or health status. At least one primary outcome (all-cause mortality, pneumonia, acute otitis media [AOM], invasive pneumococcal disease [IPD]) or secondary outcome (same as primary outcomes but caused by vaccine-specific serotypes) had to be reported.

We systematically searched Medline and EMBASE from their inception (MEDLINE, 1946; EMBASE, 1947) to October 2014 for eligible RCTs regardless of language and publication status. The search strategy (see eSupplement 1) was developed in collaboration with an experienced research librarian.

In addition, we handsearched reference lists of eligible articles and systematic reviews on the topic, contacted experts in the field, and searched the WHO trial registry platform (http://apps.who.int/trialsearch) for ongoing or unpublished eligible studies.

We extracted outcome data based on clinical diagnosis; we preferred per-patient-data based on the intention-to-treat principle. Studies which exclusively reported AOM as number of episodes were excluded. In IPD, we made the assumption that the number of episodes equals the number of patients. One investigator (HE) extracted data using a pilot-tested data abstraction form and assessed risk of bias (20). This was checked by another investigator (VG). Any disagreements were resolved by consensus or third party arbitration (MB).

We calculated relative risks (RRs) with corresponding 95% confidence intervals (CIs) using a random effects model to take into account clinical heterogeneity (21). For outcomes with event rates below 1%, we calculated Peto’s odds ratios (ORs) which are more appropriate in such cases (20). The relative effect estimates can be applied to specific baseline risks of different settings to calculate corresponding absolute effects. We present a worked example in the discussion using numbers needed to treat (20).

Our research question was relatively broad to give readers a comprehensive overview of the topic. Therefore, we thoroughly assessed between-study heterogeneity by visual inspection of forest plots and the degree of inconsistency (I2) (20). In case of moderate or high inconsistency (I2 ≥ 30%), we conducted subgroup and sensitivity analyses to find explanations for the detected heterogeneity and present results accordingly (20).

We assessed publication bias using funnel plots for outcomes for which at least 10 studies were available (22). All statistical analyses were performed using Stata 13.1.

We screened 9498 titles and abstracts, assessed 430 full texts, and included 21 RCTs (Figure 1). A list of all included studies with corresponding references is provided in eSupplement 2.

Patients were recruited between 1995 and 2008, the maximal follow-up period varied from 0.5 to 4 years (eTable 1). The 21 included RCTs were characterized as follows:

Participating children were immunocompetent (7 RCTs), from the general population with not further specified immune status (6 RCTs), or immunodeficient (1 RCT). The participating 16- to 59-year-olds were immunodeficient (2 RCTs), and the over 60-year-olds were immunocompetent or of unclear immune status (2 RCTs). PCV7 was investigated in 11 studies, PCV10 and PCV13 in 3 studies, PCV9 and PCV11 in 2 studies. The under 2-year-olds received 3 or more doses including a booster (10 RCTs). One or 2 doses were given in 8 studies including the 7 studies in adults. Three studies used varying doses depending on age at baseline. In 4 studies, PPV23 was given as a booster to PCV7. Comparators were placebo or no vaccine (8 RCTs), hepatitis A or B vaccine (6 RCTs), a meningococcal vaccine (2 RCTs) and PPV23 (5 RCTs). Details on setting, eligibility criteria, co-administered vaccines, and outcome definitions in included studies are presented in eSupplement 3.

We did not find evidence for publication bias with respect to all-cause mortality (eSupplement 4); for other outcomes assessment of funnel plots was limited by the small number of studies.

This systematic review showed that PCVs reduced the risk for the following infectious diseases:

In general, there were large effects on vaccine-specific outcomes while effects on infectious diseases from any cause were rather modest. We found no significant effect of PCVs on all-cause mortality or recurrent AOM, although there was a trend towards a risk reduction for both outcomes. A post-hoc subgroup analysis suggested that the trend towards a reduction in mortality was limited to under 60-year-olds. More data is needed to clarify these trends.

This systematic review and meta-analysis comprehensively looked at all PCVs in any population and setting, and aimed to identify all relevant RCTs. We decided on a broad scope to give readers an informative overview of the available evidence on various patient-relevant outcomes. The inherent clinical heterogeneity (different PCVs, populations, settings) was carefully considered in stratified analyses. We examined the statistical heterogeneity in all meta-analyses, and, if detected, empirically explored underlying reasons to explain that heterogeneity. In most of our meta-analyses, we found little or no heterogeneity across included RCTs despite our broad inclusion criteria. However, we detected substantial heterogeneity in meta-analyses for IPD, vaccine-specific IPD, and all-cause pneumonia. Exclusion of two studies, one for which we approximated the number of first episodes using the number of overall episodes (34) and one that stopped early for benefit (35) likely overestimating the effect size (26), explained all of the heterogeneity in meta-analyses for IPD and vaccine-specific IPD. In the meta-analysis for all-cause pneumonia, such a sensitivity analysis did not explain the detected heterogeneity. In a further exploratory analysis, we were able to identify the RCT by Klugmann et al. as the source of the heterogeneity but we could not determine any specific feature that made it different from the other RCTs. The effect estimates of these meta-analyses remain credible, because we identified the sources of heterogeneity and results hardly changed when excluding the RCT causing the heterogeneity in sensitivity analyses. Detailed trial characteristics in eTable 1 in conjunction with the methodological quality assessment and forest plots enable readers to see which type of PCV, population, and setting contributed to which evidence summary.

Overall, the risk of selection, performance, and detection bias were low or unclear in the included trials. There was some evidence for performance, attrition and reporting bias but results were robust in sensitivity analyses (data not shown). We did not find any evidence for publication bias for mortality; however, we cannot exclude publication bias because for most outcomes funnel plot analyses were not appropriate due to the small number of studies.

Comparison with other systematic reviews

There are several previous systematic reviews on PCVs (6, 7, 9, 13, e3, e4), of which only three conducted meta-analyses (6, 7, 13) and only two focused on RCTs (6, 7). These two compared PCV with placebo or another vaccine in under 2-year-olds. Their results were similar to ours (results only from the more recent one [7]) for:

In addition, this recent meta-analysis (7) reported similar effect sizes for:

A more recent systematic review with a literature search from 2010 was published over several articles (11, 12, e5, e6, e7, e8, e9, e10) and addressed all-cause and pneumococcal pneumonia, vaccine-specific IPD, vaccine-specific carriage, immunogenicity, and indirect effects of PCVs in under 15-year-olds. Another recent systematic review from 2014 focused only on otitis media in under 12 year-olds (10). These reviews reported PCVs to be effective in some studies but results remained partly inconclusive because data were not pooled. In the current systematic review, we pooled results for various patient-relevant outcomes, thoroughly examined heterogeneity, and set our results in context by providing examples for NNTs applicable to Germany.

This comprehensive systematic review and meta-analysis found significant risk reductions with PCVs for all-cause and vaccine-specific pneumonia, IPD, and AOM. We found no significant effect on all-cause mortality. 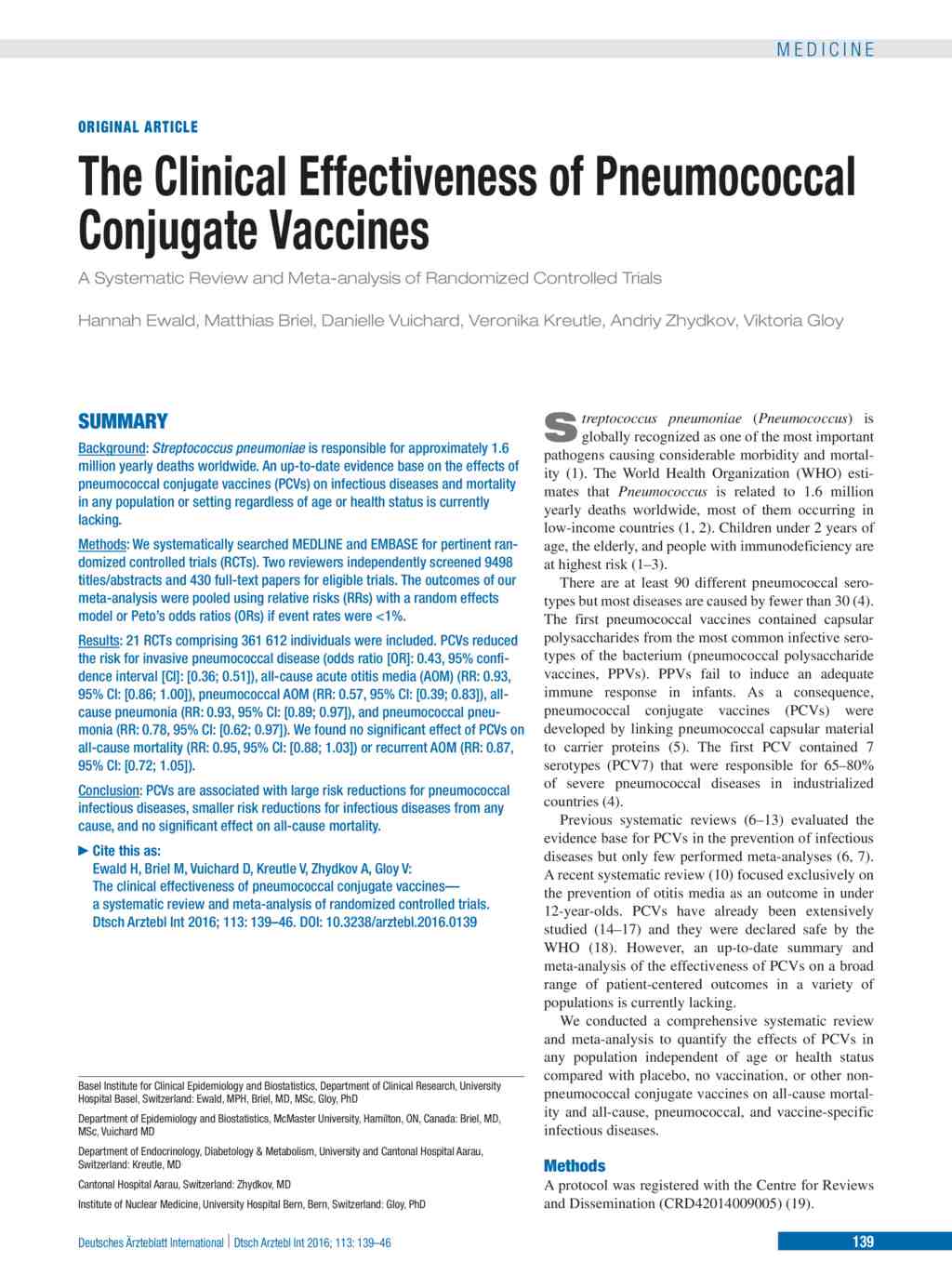