A cluster randomized trial of a physician-focused educational intervention

Weltermann, B; Kersting, C; Viehmann, A

Conclusions: After the short follow-up of 5 months, the intervention had no impact on BP control but improved the use of practice strategies.

Although epidemiological data documented outcome improvements with reduced cardiovascular events even after reductions of –2 mmHg systolic BP (12), this is difficult to implement in routine care. The health services interventions mentioned above showed heterogeneous interventional effects on systolic BP (SBP) (+0.18 to –10.2 mmHg [5, 10]) and diastolic BP (DBP) (+0.04 to –4.6 mmHg [6, 9]) (Figure 1). According to a Cochrane review, best effects were achieved when educational and organizational approaches were combined (13), with a five-year follow-up demonstrating a significant decrease in mortality (11).

We studied whether a series of three continuing medical education (CME) sessions for primary care physicians on evidence-based hypertensiology and practice redesign changed BP control rate and practice strategies. Our CRT addressed physicians in their dual role as clinicians and managers (so called “physician managers”) which is appropriate for the German health care system where the majority of practices are physician-owned. BP was measured using the gold standard ambulatory blood pressure monitoring (ABPM).

This CRT involved practices from the general medicine practice network of the University of Duisburg-Essen, Germany. The cluster design was used because the intervention addressed the physician/practice level, while it aimed at improving patients BP indirectly (16). At the 2013 spring network meeting all 51 attending practices were invited to participate.

Practices were eligible if they cared for hypertensive patients and were equipped with a calibrated ABPM device. In September 2013, 24 practices that volunteered and met the inclusion criteria were randomly assigned to the intervention or control arm (1:1) (17). To blind physicians for their interventional status, participants of the control arm received the same intervention after follow-up (waiting list control).

Allocation of patients was conducted at cluster level. All participants provided informed consent. The follow-up data collection was completed in August 2014. The Ethics Commission of the Medical Faculty of the University of Duisburg-Essen issued a positive vote for the study (reference: 13–5537-BO, date: 09/09/2013). Details of the study design are published elsewhere (17).

The practices were asked to recruit at least 10 consecutive hypertensive patients with or without prior medication and/or hypertension-related diseases fulfilling the inclusion criteria:

Because patients were recruited for the study prior to their ABPM, patients with white coat hypertension (ABP <130/80 mmHg) were excluded from the final analysis.

The sessions were provided by four hypertension specialists with one being experienced in practice hypertension management. Physicians were free to choose the diagnostic and therapeutic regimens for their patients.

The primary outcome was the BP control rate (percentage of patients with an average ABP <130/80 mmHg [18]) in the intervention and the control arm after five months. Secondary outcomes were :

ABP was measured at baseline and 5 months follow-up.

Based on our pilot study, BP control rates of 35% for the control and 70% for the intervention group were considered for sample size calculation (19, 20). Assuming an equal number of clusters per study arm, an average cluster size of 5 patients and an intra-class correlation coefficient of 0.05 (16), 10 clusters per study arm were required to detect the expected proportions with a two-sided significance level of 0.05 (80% power). The sample size was calculated with R Package ‘CRTSize’, function n4props (21, 22).

Following an intention-to-treat approach (23) the analysis included all study patients with an ABPM at baseline and follow-up expect those with white coat hypertension (ABPM readings <130/80 mmHg at baseline (18)). The chi-square test was used to compare BP control rates between intervention and control. Using generalized linear mixed models (GLM), crude and adjusted analyses were performed to determine the effect of the intervention on BP control with the control arm as reference. The models accounted for clustered data by random effect modeling with an unstructured covariance pattern. The effect of the intervention on BP control is described as an odds ratio (OR) with 95% confidence interval.

GLMs were also calculated for BP changes (secondary outcomes). The interventional effects on SBP and DBP were expressed as point estimates. The GLMs for the total analysis population were adjusted for sex, age, and having ≥1 hypertension-related disease as a marker for disease severity. To assess effect modification, stratified sensitivity analyses were performed for sex, age (≤61, >61), having ≥ 1 hypertension-related disease and the presence of RH (≥ 3 antihypertensive substances). The latter was a post-hoc analysis triggered by the learning content requested by the participants. Additionally, GLMs were calculated for the extended study population including patients with white coat hypertension.

Statistical analyses were performed with IBM SPSS Statistics, Version 22.0; GLMs were calculated with SAS, Version 9.4. Statistical significance was set at p<0.05. There was no correction for multiple testing.

24 of the 51 invited practices volunteered and met the inclusion criteria (47.1%). They were randomly assigned to the intervention (n=12) or the waiting list control arm (n=12) and recruited 169 patients: intervention arm, n=101, control arm, n=68 (Figure 2). Four practices dropped out during data collection (1 physician died, 3 practices discontinued due to lack of interest). In key characteristics, these did not differ from participating ones. Also, physicians from both study arms were comparable (Table 1, eTable 1).

Physicians of the intervention arm requested the following input:

Table 2
Characteristics of patients with resistant hypertension
Enlarge All figures

Table 3
Blood pressure control rates and average ambulatory blood pressure values for the analysis population and patients with and without resistant hypertension, stratified by intervention status
Enlarge All figures

eTable 2
Blood pressure control rates and average ambulatory blood pressure values for the study population and patients with and without resistant hypertension, stratified by intervention status
Enlarge All figures

Changes in practice management and medication

First, the improvement in both study arms (–8.2 mmHg systolic, –4.1 mmHg diastolic) suggests a bias due to study participation. Although we used a waiting list control strategy, study participation including the ABPMs and questionnaires likely influenced the physicians’ and patients’ awareness of hypertension in both study arms equally, leading to an underestimation of the intervention’s effects. This is supported by the fact that BP improved even in patients with long-standing hypertension.

Second, the results of the sensitivity analyses imply that physicians in the intervention group benefited from the education about managing patients with RH. This result is explained by the participatory approach chosen: following the physicians’ requests, the CME sessions provided information on diagnostic and therapeutic strategies for RH. However, as our study was not specifically designed for this subgroup, future studies are needed. Given that RH is associated with a 1.34-fold higher risk for all-cause mortality, a 2.11-fold higher risk for nephropathy and a 1.47-fold higher risk for cardiovascular diseases compared to patients without RH (24), our finding suggests that an intervention with input on how to manage RH bears an enormous public health potential.

Third, the BP changes observed in our study are within the range of those observed in other CRTs (Figure 1). Like ours, all studies saw improvements in BP within their study populations, but with inconsistent interventional effects (5, 6, 9, 10, 14, 15).

Fourth, physician managers of the intervention arm did not explicitly request organizational input, yet they newly applied practice strategies between baseline and follow-up. Unlike other CRTs, we focused on rather easy-to-implement internal practice redesign strategies which were selected by choice of the respective physician manager. A longer follow-up period might have shown an impact of these implementations on BP.

The primary outcome chosen was difficult to obtain in a patient sample such as ours in the rather short follow-up time, so that a combined outcome (BP control and/or a pre-defined BP reduction) and a longer follow-up (e.g. 12 months) are reasonable for future studies. The drop-out rate of 21% was within the range described in other CRTs addressing hypertension (11–33%) (6–10). Cluster drop-outs and patients lacking a follow-up ABPM necessitate larger oversampling to assure study power. In addition, incentives for patients and physicians might help to increase follow-up rates. A major strength of our study is the cluster design which is well known for its proximity to real-life. Using a participatory approach, we tailored the intervention to the physician managers’ needs. Finally, the main outcomes were measured by ABPM which is considered the most valid noninvasive BP measurement method.

Our educational intervention showed no effect on BP, yet improved the application of practice strategies. Our finding of an interventional effect in the subgroup of patients with RH warrants further investigation. A larger CRT focusing on these cardiovascular high-risk patients is planned.

The study was kindly supported by the Ministry of Innovation, Science and Research, North-Rhine Westphalia, Germany which provided a general grant for teaching and research at the Institute. The source of funding did not influence the study design, analyses, interpretation of results or the decision on publication.

Table 2
Characteristics of patients with resistant hypertension
Enlarge All figures

Table 3
Blood pressure control rates and average ambulatory blood pressure values for the analysis population and patients with and without resistant hypertension, stratified by intervention status
Enlarge All figures

eTable 2
Blood pressure control rates and average ambulatory blood pressure values for the study population and patients with and without resistant hypertension, stratified by intervention status
Enlarge All figures
Hypertension Management in Primary Care: A Cluster... 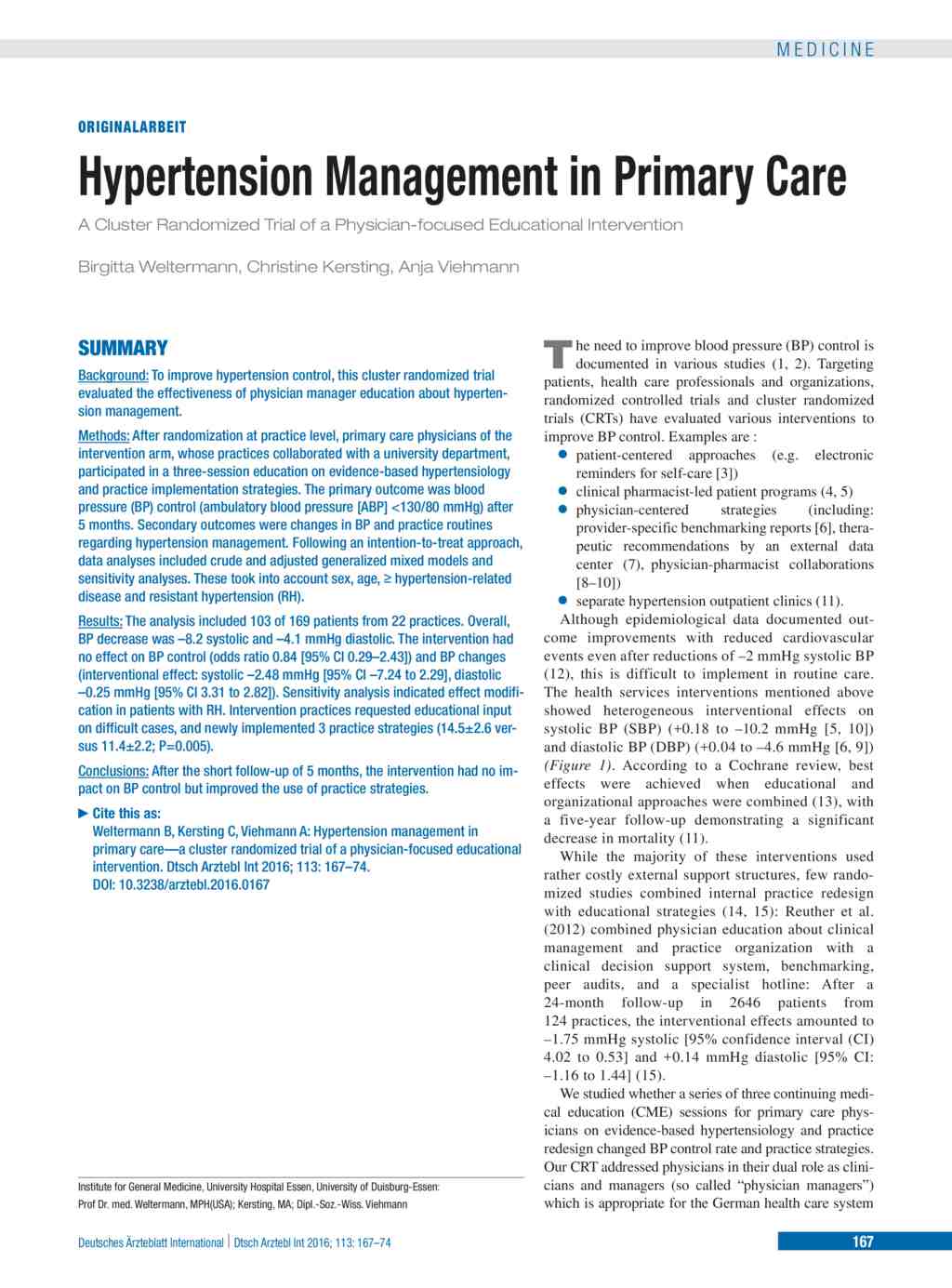