DÄ internationalArchive12/2016Health and Disease at Age 100: Findings From the Second Heidelberg Centenarian Study

Health and Disease at Age 100: Findings From the Second Heidelberg Centenarian Study

Background: Centenarian studies from around the world have shown that reaching age 100 typically involves substantial health issues. The present study adds to the existing knowledge from other countries by describing health conditions in German centenarians.

Methods: A total of 112 centenarians or their primary contacts provided information on acute and chronic health conditions and pain in the context of the Second Heidelberg Centenarian Study (mean age = 100.45 years, standard deviation [SD] = 0.47, 89% females).

Conclusion: German centenarians experienced a substantial number of illnesses, dominated by sensory and mobility conditions. Cardiovascular diseases were the only potentially lethal illnesses with high prevalence. Evidence of unaddressed pain seems alarming, requiring future research. Emerging health profiles indicate that even in very advanced age, quality of life may be improved by enhanced diagnostics and optimal disease management. Mobility limitations may be addressed with preventive efforts.

Very old individuals (i.e., 80 years and older) represent the fastest growing population in most industrialized nations (1). This includes centenarians, the oldest old within this group. According to the German CENSUS, the number of German centenarians has grown from 5937 to 13 445 between the years 2000 and 2011, which represents an increase of 126%. Future projections expect this trend to further accelerate (2). This development raises concerns about increasing numbers of individuals who may experience their advanced age in poor health and related medical needs and costs burdening the health care system (3). A solid evidence base regarding health conditions in very late life is thus pertinent. The present paper aims to identify common diseases among centenarians in Germany.

Centenarians have long been discussed as models of successful aging, given that they have outlived most of their cohort members. Yet, studies from around the world document that age 100 is often characterized by high morbidity and poor functional health (4–7) (Table 1). For instance, about 97% of centenarians of the Tokyo Centenarian Study had chronic diseases (8). The population-based Danish Centenarian Study identified only one of 207 centenarians without health issues; four acute or chronic conditions were the average (9). However, some studies reported fewer comorbidities: A Greek centenarian study found only one health condition on average (10). In the New England Centenarian Study (NECS), 32% of male and 15% of female participants reached age 100 without any of the ten most common diseases, which include hypertension, heart disease, stroke and cancer (11). Reasons for inconsistent findings are unclear, but may relate to different methodological approaches including sampling procedures (e.g., population-based vs self-nomination) and type of information considered (e.g., medical records vs self-report).

Reports about specific diseases also vary across studies. A common finding is the high prevalence of cardiovascular conditions (for a review see [12]). For example, cardiovascular diseases were among the illnesses with highest prevalence (72%) in Danish centenarians (9). Specifically, chronic heart failure was diagnosed in 32% of Danes, which was similar to the prevalence found in Canadian centenarians (35%) (3). In NECS, heart disease was the most frequent illness (men: 42%; women: 40%) (11). Hypertension was among the most prevalent conditions in Danish (52%) (9), Greek (51%) (10), and Japanese centenarians (63%) (8), but less often reported in NECS (19% in men, 35% in women) (11).

Participants were 112 centenarians (mean age = 100.45 years, standard deviation [SD] = 0.47) from the population-based Second Heidelberg Centenarian Study (HD100-II) (17). Most were exactly 100 years old, 5% were 99, and 10% were 101 to 103. For recruitment, we requested contact information from the city registries of all individuals born in 1911/12, living in or within 60 km of Heidelberg, Germany. All 485 nominated individuals were invited for study participation. No exclusion criteria were applied. Of these, 298 centenarians either died between nomination and first contact, refused participation, or no contact could be established. Of the remaining 187 individuals, 7 centenarians and 73 primary contacts provided only basic information, via telephone. Reasons for refusing full study participation were cognitive restrictions/dementia (43%), concern the interview would be too exhausting (28%), no interest (16%), poor physical health (9%) and other reasons (4%). One-hundred seven centenarians or their primary contact agreed to participate in a face-to-face interview. Five additional centenarians nominated themselves after having heard of the study. Thus, full participants were 112 centenarians who were interviewed at their residence (private home or elder care facility). Of these, 94 centenarians delivered self-report information. In addition, primary contacts provided information, complementing the centenarian’s report (n = 78). However, when the centenarian was no longer able to answer reliably (e.g., due to cognitive impairment), the primary contact served as the only information source (n = 18). Comparisons between full study participants and those providing only basic information indicated that our final sample was more educated, had fewer children, and better daily and cognitive functioning (Table 2).

Acute and chronic health conditions—Centenarians and primary contacts were asked whether the centenarian had the following acute and chronic health conditions: hypertension, heart condition, diabetes, chronic lung disease, ulcers or other serious stomach issues, cirrhosis or other liver problems, kidney disease, frequent urinary infections, incontinence, prostate-related problems, problems with vision or hearing, arthritis, osteoporosis, other diseases (subsequently coded), and stroke, falls, pneumonia, and cancer (from age 95 on). Dementia/cognitive impairment was determined using thresholds of two dementia screeners and defined by either a score of 4 or higher (i.e., severe cognitive decline) given by the interviewer on the Global Deterioration Scale (18), or a score of 10 or lower on the shortened Mini-Mental State Examination (short MMSE, max. 21 points) (19), which includes original MMSE items that are unlikely to be biased by the poor sensory functioning highly prevalent in centenarians (20).

Pain—Centenarians were asked how often they experienced pain (0 = never, 1 = seldom, 2 = sometimes [once or twice per month; during specific movements], 3 = frequently [often; always at night, in the morning], 4 = always [most of the time, all day, every movement hurts]). Pain severity was assessed with a scale from 0 to 10 (key anchor points were 0 = no pain, 3 = bearable, 7 = severe, 10 = unbearable).

Statistical analysis—Information on health conditions provided by the centenarians and their primary contacts were combined, as their reports did not differ substantially (i.e., all illnesses reported were used). In case of discrepancy regarding serious issues (e.g., cancer), primary contacts were asked to clarify. Pain was assessed using self-reported data from centenarians only. Data analysis was performed with SPSS. Associations were analyzed using Pearson correlations and χ2-tests.

Sensory problems were most prevalent: 94% reported vision and/or hearing impairments (Table 3). About 72% had problems with mobility, including falls (71%) and difficulties with balance/walking (13%). Musculoskeletal conditions affected about 60%, with over half of the participants having arthritis and about one fourth having osteoporosis. Cardiovascular conditions and problems with the urinary system showed similar prevalence, affecting over half of the sample (57%, and 55%, respectively). The leading cardiovascular condition was high blood pressure (45%), followed by heart diseases (31%). For conditions affecting the urinary system, incontinence was reported by almost half of the centenarians; 66% of the male centenarians had prostate problems. Evidence of a neurological/brain condition was found in 40%: 33% had markedly reduced cognitive capacity/dementia and 12% reported having had a stroke after age 95.

Four and five health conditions were found for 23 (21%) and 19 (17%) participants, respectively. Four centenarians had 10 conditions, and one had the maximum of 11 conditions.

Considering diseases with highest mortality risk, i.e. heart disease, stroke and non-skin cancer (prior or ongoing), it is notable that 67 (60%) centenarians did not report any of these conditions. Thirty-four (30%) had only one, and 11 (10%) had two of these diseases. No centenarian had all three of these conditions.

This study reported acute and chronic health conditions in the population-based Second Heidelberg Centenarian Study. Overall health of the German centenarians was, on average, characterized by five acute and/or chronic diseases, indicating a substantial burden, and representing one more condition than found in Danish centenarians (9). This could be due to sensory and mobility conditions not being included in the Danish count. Sensory issues were the most prevalent: Almost all German centenarians had problems with vision and hearing, paralleling prior studies (8, 10, 11).

Mobility problems represented the second most commonly reported health condition. Of particular concern were falls as over 70% of the centenarians reported at least one fall since age 95. This is consistent with reports that unstable gait and walking becomes a challenge for many of the oldest-old (21), and it is important to note that, as to our knowledge, prior reports on health in centenarians have not addressed this issue. Of further note is the high prevalence of musculoskeletal conditions, the condition group with the third highest prevalence affecting two thirds of the centenarians. About half of the centenarians had arthritis, representing the same proportion found in Danish centenarians (9).

Consistent with prior studies, low rates of diseases with potentially lethal outcome (e.g., stroke or non-skin cancer) were found, except for cardiovascular conditions. Although centenarians are affected by these conditions later in life and survive them longer, cardiovascular and circulatory diseases are nevertheless associated with high disease burden and cause the largest loss of disability-adjusted life years (22). About two thirds of the sample were affected, and the prevalence of heart diseases and hypertension were similar to prior studies (3, 9, 10). Urinary conditions were also reported by about half of the sample, as in prior work (9).

Although the prevalence of stroke (from age 95 on) was comparable to other centenarian studies (9, 11), an interesting difference is the lower prevalence of dementia (33%) in our sample. Dementia was not included in the diseases listed in our questionnaire, and only a handful participants or their primary contacts mentioned it on their own. We therefore used a combination of the short MMSE and the Global Deterioration Score for an estimation. This score identified participants suffering from poor cognitive functioning and related limitations, but cannot replace a diagnosis (23). Thus, this finding has to be interpreted with caution.

Although not highly prevalent, cases with ongoing cancer (6%) as well as pain conditions (7%) seem noteworthy. Among the Danish centenarians, there were no reports of either condition as ongoing, and cancer was only reported among past conditions (12%) (9). In the Tokyo Centenarian Study, no distinction was made between prior and current cancer (9%) (8). Thus, it is an open question whether ongoing cancer at age 100 could represent a more recent development.

Pain, mentioned in one prior study only, seems to be an overlooked issue in centenarians. Darviri et al. (10) found that among Greek centenarians, 30% often suffered from musculoskeletal pain, 19% from back/lower back pain, and 15% from headaches. In our sample, we found comparable percentages. That a substantial number of centenarians suffers from pain is concerning and deserves more attention, in particular considering centenarians’ apparent willingness to share this information when asked.

The present study has some limitations: First, although our study was population-based, not all centenarians or their families agreed to participation. As centenarians with lower education, more cognitive impairment and health issues were more likely to decline participation, our sample may be somewhat positively selected. Second, information on health conditions was not based on medical records, but combined information from centenarians and their primary contact. Given the high convergence between both information sources, we believe that our data are trustworthy. Finally, investigation of gender differences would have been useful, yet gendered survival ratio resulted in a small number of males (n = 12).

In conclusion, German centenarians experience substantial health issues, but the nature of common conditions points to potential opportunities for improving quality of life through preventive efforts (e.g., concerning gait/balance and mobility [21]) and optimal disease management (e.g., pain), even at this very advanced age.

Table 4
Associations between pain and health conditions (only conditions are shown that have a significant association with either pain frequency or pain severity)
Enlarge All figures
Health and Disease at Age 100: Findings From the Second... 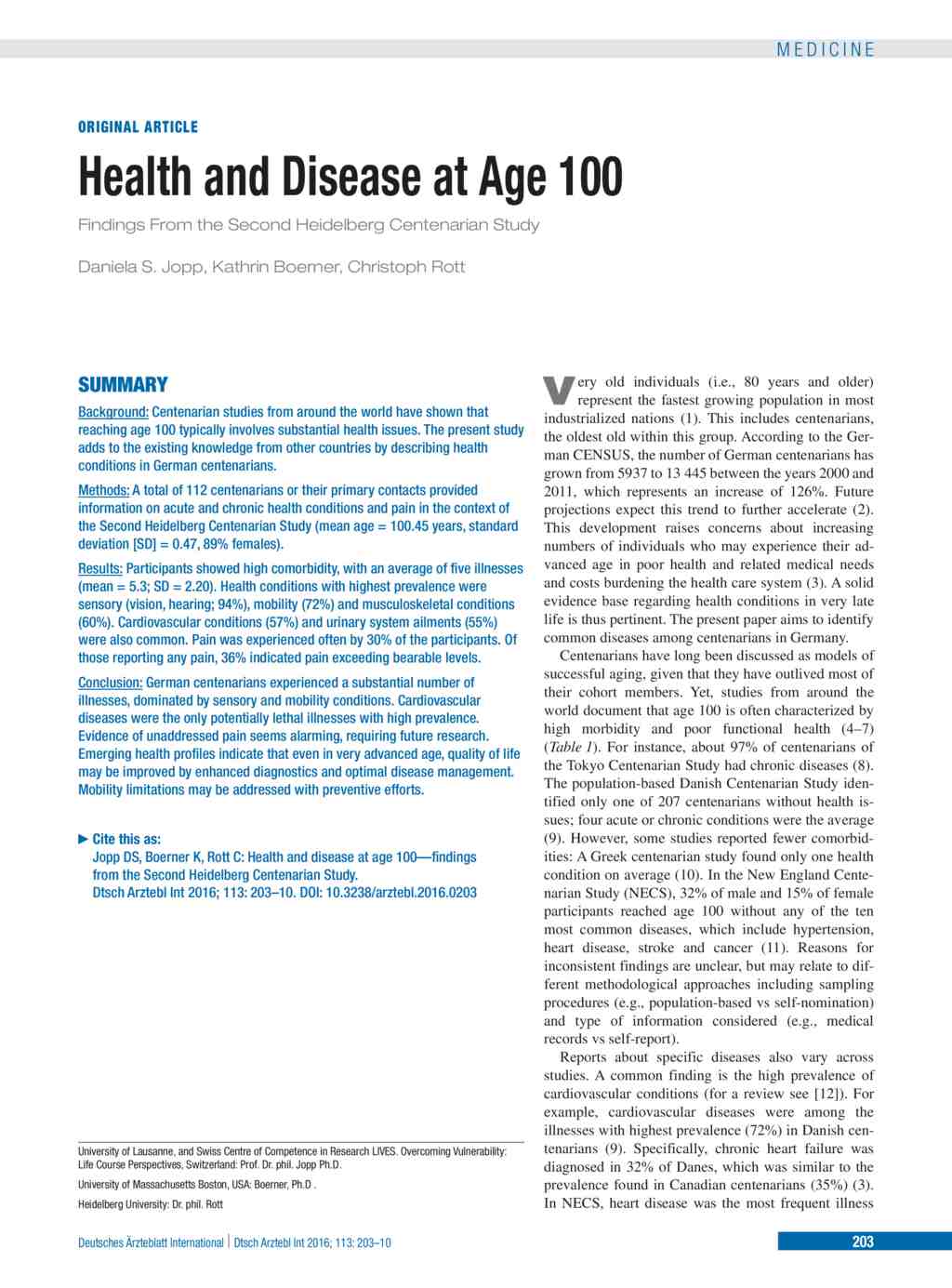