Witzel and Lorenz point out an often encountered misunderstanding relating to the data used. The so-called DRG data include for each discharged case not only the diagnosis related group but all diagnosis and procedural codes. In our evaluation we did not refer to DRG groups, but we analyzed the treated cases on the basis of coded procedures and diagnoses, as shown in eTable 1 (1). The argument that hernia procedures are difficult to capture, as a DRG subsumes more than 60 different surgical procedures, does therefore not apply to our article. Incarcerated hernias, as mentioned by Witzel and Lorenz, were indirectly accounted for, since herniotomy patients in whom a bowel operation had been coded for the same inpatient stay were excluded from our analysis.

Witzel and Lorenz further point out that we analyzed only inpatient procedures in our study. If outpatient herniotomies were to be included into the denominator, total mortality—assuming that outpatient procedures would incur zero mortality—would be lower (assuming 20% outpatient procedures, an estimated 0.11% instead of 0.13% would result), but this would not have changed our conclusion, that preoperatively detectable risk factors exist in patients who had inpatient surgery. In principle, it is possible to distinguish between different surgical techniques on the basis of the procedural codes within the used data, but this was not the subject of our study. We think that analyses using the hospital discharge data used in this study provide valuable additions to separate data collections. Compared with collected data, they offer the advantage that they are complete, especially with regard to cases that took an unfavorable course (2). Such datasets are internationally often used for analyzing healthcare services (3, 4).

Holzheimer adds several aspects with regard to hernia surgery, which were, however, not the subject of our study. We aimed to identify in the procedures under study possible leverage points for improving patient safety. We wish to add that this does not only apply for surgical complications but also for the preoperative identification of comorbidities. Holzheimer furthermore points out possible risk differences depending on different operative techniques, something for which different results exist (3). The surgical techniques also could be studied using DRG data, but this was not part of our research question.

Von Hinüber correctly mentions autopsy rates, which according to the respective procedural code were low. We assume that this is due to under-documentation, as this procedure is not relevant for billing purposes. We agree with his request for routine postmortem examinations in deceased patients after procedures with a low risk of death, and we also agree that insights gained from this may contribute to improving healthcare quality. Apart from that, we wish to point out that the differences between deceased patients and surviving patients can be statistically well described on the basis of the data used in our study for the procedures under study, and that suggestions for improvements of treatment might be deduced accordingly.

Hanisch criticized the use of administrative data for hospital-related quality assurance and evaluation. The usability of medical information from administrative data in quality assurance has been confirmed multiple times, as explained in other publications from our working group (5, 6). However, assessment of individual hospitals was not the subject of the study under discussion here, and so any discussion thereof would mean missing the point.

Minimizing risks for patients—especially avoiding death—is undoubtedly a concern for doctors (7). This generally applies for all procedures and certainly for operations that are not expected to entail any risk of death for the patient, which is an undesirable outcome from a medical perspective in any case. Our study intended to identify whether and at which point options existed for lowering death rates and improve patient safety. From our perspective, the results provide a number of indications. The mean risk of dying—for example, in association with cholecystectomy—is 1 death in every 250 procedures, and, as we have shown, much higher for certain patient groups. A further reduction on mortality is highly desirable, especially as this can be achieved only by improving perioperative management, so that the effect may be expected to exceed mere mortality.

Although critical discussion of the underlying data is needed, we would be pleased if the suggestions that can be derived from our study (1) would be considered as clues for improvement.

The Department of Structural Advancement and Quality Management in Health Care, for which the authors work, is an endowed professorship of Helios Kliniken GmbH. 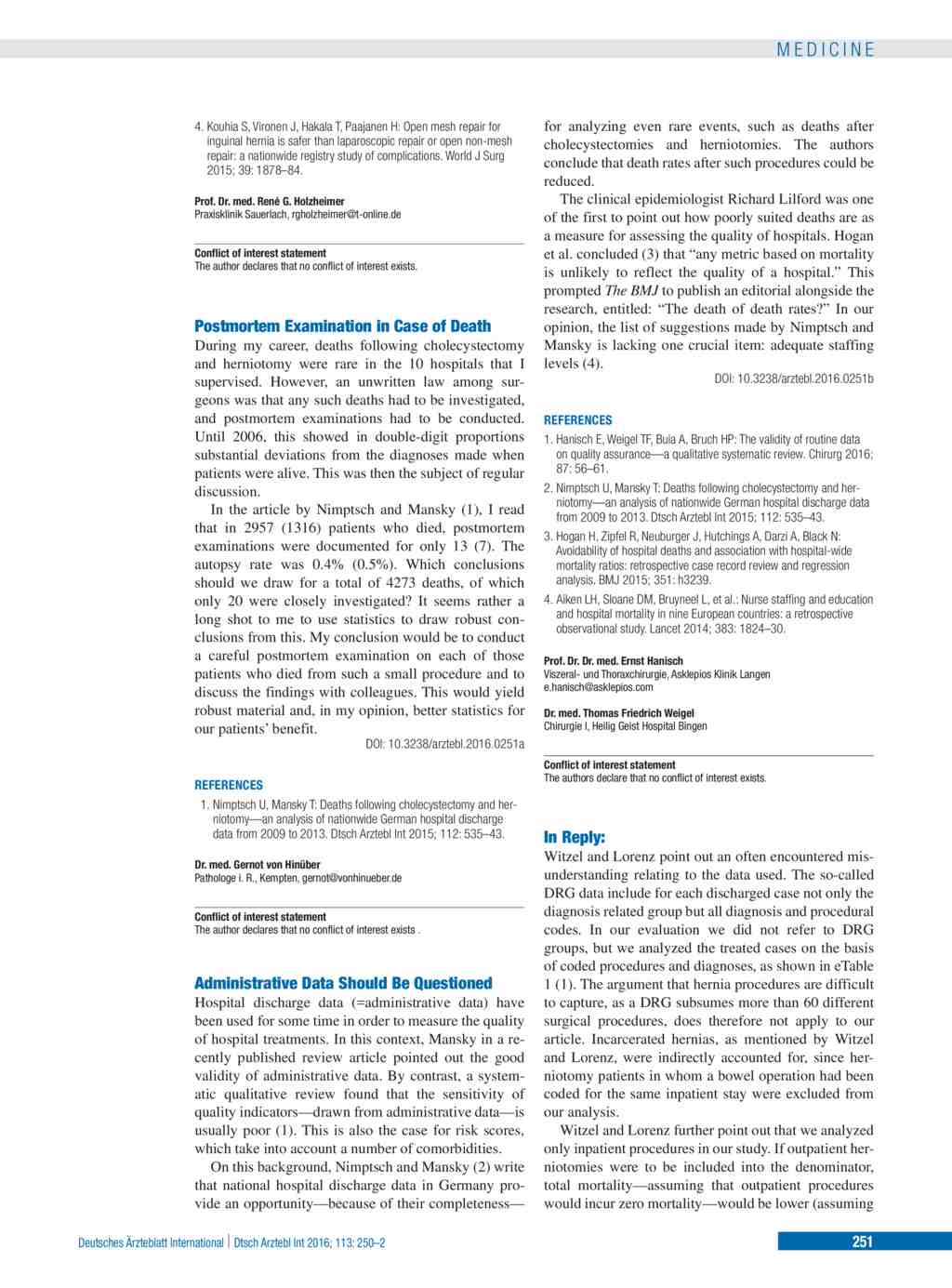