DÄ internationalArchive15/2016Sleep, Muscle Mass and Muscle Function in Older People: A Cross-Sectional Analysis Based on Data From the Berlin Aging Study II (BASE-II)

Sleep, Muscle Mass and Muscle Function in Older People: A Cross-Sectional Analysis Based on Data From the Berlin Aging Study II (BASE-II)

Background: Loss of muscle mass, particularly in old age, can restrict mobility and physical function. Sleep is thought to play a key role in the maintenance of muscle mass; sleep disturbances have a prevalence of 6–30% in Germany. In this study, based on data from the Berlin Aging Study II (BASE-II), we analyze the relationship between sleep efficiency and quality on the one hand, and muscle mass and muscle function on the other.

Methods: We analyzed cross-sectional data from 1196 subjects (52.5% women; 68 ± 4 years). Sleep behavior was assessed with questions from the Pittsburgh Sleep Quality Index; appendicular lean mass (ALM) with dual x-ray absorptiometry; and muscle function with a measure of grip strength and with questionnaires about physical activity and impairment of physical activities. Low muscle mass was determined from the ALM corrected by the body-mass index (BMI), i.e., from the ratio ALM/BMI.

Conclusion: These findings support the hypothesis of a link between sleep and muscle mass. The dependence of muscle mass on sleep behavior needs to be investigated in longitudinal studies.

The prevalence of sleep-related complaints among both hospital patients and those who visit their primary care physician is reported as 6 to 30%. Problems in falling asleep and sleeping through the night are particularly frequent in patients over 65 years old (1, 2, e1). Sleep quality, sleep quantity, and sleep architecture change with increasing age:

Sleep is associated with biological and mental regeneration processes. Insufficient or non-restorative sleep may lead to inability to concentrate, cognitive deterioration, reduced physical performance capacity, restricted social interactions, decreased quality of life, or a higher risk of falling (7–10, e3, e4). Daytime tiredness and concentration difficulties can contribute to a decrease in physical activity leading to a reduction in muscle mass (11).

Furthermore, metabolic, hormonal, and immunological changes are observed in persons with decreased quality and quantity of sleep (12). The anabolic hormones IGF-1 and testosterone, which play important roles in protein synthesis and thus in maintenance of muscle mass, are down-regulated by sleep deficit (12). On the one hand, the insulin resistance associated with lack of sleep is thought to be a major risk factor for the loss of muscle mass and muscle function in old age (13). On the other, reduced muscle mass itself favors insulin resistance, because the muscles are the principal site for both the action and the storage of glucose. Sleep and muscle mass thus interact (Figure 1). Particularly at advanced age, loss of muscle function can lead to premature restriction of daily activities and ultimately to the early need for care. On the assumption that sleep and muscle mass are interconnected, we analyzed data from the Berlin Aging Study II (BASE-II) on sleep quality and sleep efficiency in community-dwelling elderly and investigated possible associations with muscle mass, grip strength, and physical activity.

Cross-sectional data on sleep behavior (Pittsburgh Sleep Quality Index), appendicular lean mass (ALM), and muscle function (measurement of hand grip strength and questionnaire on physical activity) from 1196 BASE-II participants (52.5% of them women; mean age 68 ± 4 years) were available for analysis. BASE-II is an epidemiological cohort study with the primary aim of investigating mechanisms of pathogenesis in the context of the aging process (14). Low muscle mass was determined on the basis of the cut-off values for body mass index (BMI)–corrected muscle mass (ALM/BMI), as defined in 2014 by the US Foundation for the National Institutes of Health (FNIH) Sarcopenia Project (15–17). The methods are described in detail in the eBox.

Complete cross-sectional data on sleep efficiency and sleep quality, ALM, and BMI from 1196 study participants were available (52.5% of them women; mean age 68 ± 4 years). The BMI was needed to calculate ALM/BMI. The clinical and sleep characteristics of the male and female probands are shown in Table 1.

Comparison of the sexes (Table 2) showed that a significantly higher proportion of men had low BMI-corrected muscle mass (< ALM/BMI cut-off value). Individual sleep characteristics such as sleep latency, getting-up time, time in bed, and sleep duration were not associated with low muscle mass (< ALM/BMI cut-off value) in men or women. Both men and women with low muscle mass more frequently reported deleterious effects on physical activity, including problems with moderate activity, climbing stairs, and crossing the street. Moreover, probands of both sexes had lower maximal hand grip strength. Particularly the homeostasis model assessment of insulin resistance (HOMA-IR) as a surrogate marker for insulin resistance and C-reactive protein (CRP) as a marker for inflammation were elevated in men and women whose muscle mass was below the ALM/BMI cut-off value (Table 2).

Study participants with low muscle mass (< ALM/BMI cut-off value) and probands over the ALM/BMI cut-off value had comparable frequencies of sleep-disrupting events such as nycturia and pain and showed similar impairments of physical activity and grip strength (data not shown).

Consumption of sleep-inducing drugs was also associated neither with grip strength nor with muscle mass. Among women, however, self-reported physical performance capacity was greatly reduced in those who took such medications. A statistically significant difference was found with regard to the ability to carry out moderately strenuous activities (p = 0.032; data not shown).

Finally, regression models were calculated to determine the odds ratio (OR) of bad sleep quality (fairly bad or very bad) and poor sleep efficiency (<85%) with regard to ALM/BMI cut-off values. The results in the male study participants are shown in Table 3. In men, the model with the most parameters (model 3: adjusted for age, height, weight, physical activity, comorbidities, depression, alcohol consumption, smoking status, thyroid-stimulating hormone (TSH), testosterone, HOMA-IR, and CRP; R2 according to Nagelkerke = 0.581) revealed an OR of 2.8% with a 95% confidence interval of [1.1; 6.7] for bad sleep quality and OR 4.3 [1.2; 15.1] for poor sleep efficiency. In contrast, these two sleep characteristics showed no statistically significant connection in women.

Models 1 to 3 were also calculated for grip strength (data not shown). In model 1 (p = 0.003) and model 2 (p = 0.045) poor sleep efficiency had a significant effect on grip strength in women. This was not the case in model 3 (p = 0.084). Bad sleep quality and grip strength were not significantly associated with one another in any of the models.

Calculation of the regression models incorporated factors (Table 3, Figure 1) that can exert an influence on both sleep behavior and muscle mass (26). Muscle mass decreases with increasing age and depends on height and weight (model 1). Advanced age and high BMI also affect sleep behavior. Physical activity is among the positive influences on muscle mass/function and sleep, while lifestyle factors such as alcohol consumption and smoking, together with comorbidities, have negative effects (model 2). Model 3 included monitoring of metabolic (insulin resistance; HOMA-IR) and hormonal parameters (testosterone and TSH) (27).

Owing to the cross-sectional design of our study, the differences in results between men and women cannot be adequately explained. Insulin resistance, which is particularly likely to develop in men with reduced duration of sleep, may play an important role, as may other metabolic and hormonal changes (28, 29). Furthermore, there are indications that BMI can increase due to reduced sleep duration. The increase in BMI is a monotonic trend in men (elevated BMI with decreased sleep duration), whereas in women there is a U-shaped curve (29). The fact that our results also relate to BMI-corrected muscle mass may have contributed to the differences between men and women. The results for hand grip strength, which were positively associated with BMI, could also have been influenced (30, 31). Men had a significantly higher BMI than women (Table 1).

However, this analysis of older people with few comorbidities who were living independently at home, based on the standardized Pittsburgh Sleep Quality Index (PSQI) questionnaire, shows that poor sleep efficiency and/or bad sleep quality are often reported in advanced age (bad sleep quality 16.4%, poor sleep efficiency 16.2%). A subgroup analysis of 269 probands from whom supplementary data on consumption of sleep-inducing drugs and events that disturb sleep were obtained (using questions from the PSQI questionnaire) revealed, furthermore, that sleep-disrupting events, waking phases during the night, and regular consumption of sleep-inducing drugs represent serious problems. This is particularly important with regard to the principal results of the study: bad sleep quality and poor sleep efficiency are associated with reduced muscle mass and reduced grip strength.

The results of our analysis are in agreement with current working hypotheses. Study participants with reduced sleeping time or inefficient sleep, especially with regard to sleep apnea, show hormonal or metabolic changes (12, 28, 32, 33, e7–e10). Hormones like testosterone and IGF-1 are down-regulated and cortisol is up-regulated (33, e10). Especially IGF-1 is a central factor in protein synthesis in muscle. IGF-1 disinhibits secretion of growth hormone and promotes insulin resistance. This is thought to be an important mediator for the loss of muscle mass and muscle strength and for the development of functional impairments in old age (34, 35). This analysis also found increased levels of HOMA-IR as marker of insulin resistance in probands below the ALM/BMI cut-off value. The inflammation parameter CRP, which we also found to be elevated in study participants below the ALM/BMI cut-off value, is also discussed as a factor in muscle atrophy (36).

Participants in studies of the effects of sleep deprivation have shown reduction in muscle mass and atrophy of the musculature (37, 38).

Analyses by our group have demonstrated that the ALM/BMI cut-off value can also be used in connection with frailty and physical performance capacity in the BASE-II cohort (22). Correction for height and weight, as performed by McLean et al. and others, better reflects limitations of physical performance capacity and grip strength and is thus a more suitable marker for clinically relevant low muscle mass (15, 16, 39). Nevertheless, it must be realized that the use of fixed cut-off values for ALM/BMI may distort the results in individual cases, because different phenotypes—in respect of height, weight, and muscle mass—can yield identical BMI scores. Persons who have identical BMI but differ greatly in height have widely discrepant BMI-corrected muscle mass results. Correspondingly, we also investigated associations with muscle mass and grip strength independently of these fixed cut-off values.

Reduced muscle mass plays a crucial role in advanced age and is associated not only with the performance of routine daily activities but also with geriatric syndromes such as frailty or falling. Muscle mass is therefore a central topic in geriatrics (22, 40).

Our results are subject to limitations. The data on sleep quality and efficiency, obtained using a questionnaire, are self-reported and thus subjective. With regard to sleep quality, the study participants were restricted to the following choices:

The lack of an intermediate category between “fairly bad” and “fairly good” means that a proband's actual sleep quality may be over- or underestimated. The same is true for the questions about physical activity and physical performance capacity. Physical activity was analyzed solely by questionnaire, not by objective means such as actigraphy. Data on sleep-disrupting events and consumption of sleep-inducing drugs were available only from a subgroup of 269 probands, so it was not possible to evaluate the PSQI cut-off values for the whole study population. However, inclusion of these sleep-disrupting events does not change the results. Finally, the BASE-II cohort is not a random sample of the general population: BASE-II participants’ health status and health awareness were higher, on average, compared to the general population (14). Diseases such as chronic obstructive pulmonary disease (COPD) and coronary heart disease are under-represented, so the results from this study collective cannot simply be extrapolated to the total population. We would expect a cohort with more comorbidities to feature a higher prevalence of functional restrictions than in our study, together with a tendency towards strengthening of the associations we have described here.

The remaining authors declare that they have no conflict of interest.

eTable
Characteristics of the male and female study participants by sleep quality and sleep efficiency
Enlarge All figures
Sleep, Muscle Mass and Muscle Function in Older People: A... 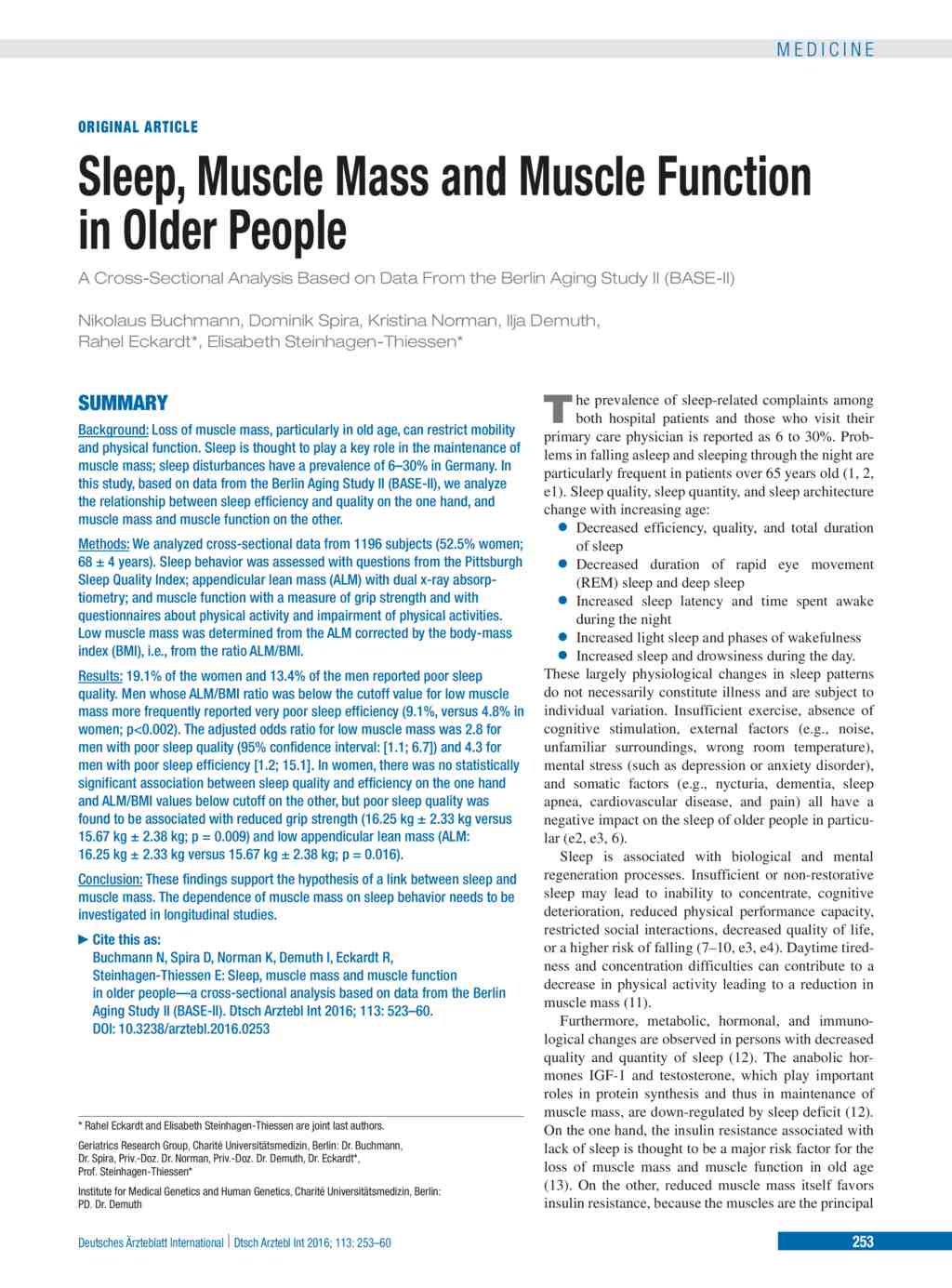