Background: Inhaled corticosteroids (ICS) are markedly less effective against chronic obstructive pulmonary disease (COPD) than against asthma, and also have worse side effects. Whether ICS should be used to treat COPD is currently a matter of debate.

Methods: This review is based on pertinent articles retrieved by a selective search in PubMed and the Excerpta Medica Database (EMBASE) carried out in May 2015. We analyzed clinical trials of ICS for the treatment of COPD with a duration of at least one year, along with meta-analyses and COPD guidelines.

Results: ICS lower the frequency and severity of COPD exacerbations in comparison to monotherapy with a long-acting ß2-agonist, but have no effect on mortality. Compared to placebo, ICS monotherapy lessens the decline of forced expiratory volume in one second (FEV1) over one year by merely 5.80 mL (statistically insignificant; 95% confidence interval: [–0.28; 11.88]) and only marginally improve quality of life. ICS use in patients with COPD increases the risk of pneumonia. A combination of ICS with a long-acting bronchodilator improves FEV1 by 133 mL [105; 161] and lowers the frequency of severe exacerbations by 39%. The frequency of exacerbations is lowered mainly in patients who have many exacerbations; thus, ICS treatment is suitable only for patients with grade III or IV COPD.

Conclusion: ICS monotherapy has no clinically useful effect on pulmonary function in COPD. The main form of drug treatment for COPD is with bronchodilators, either alone or in combination with ICS. ICS can be given to patients with grade III or IV COPD to make exacerbations less frequent. Patients with an asthma–COPD overlap syndrome (ACOS) can benefit from ICS treatment.

Inhaled corticosteroids (ICS) are less clinically effective in chronic obstructive pulmonary disease (COPD) than in asthma. In asthma, they inhibit the underlying bronchial inflammation, thus optimizing both lung function and the prognosis. In COPD, the improvement they bring in terms of forced expiratory volume (FEV1), quality of life, and prognosis is much lower. Then there is the additional dilemma that, although ICS reduce exacerbation frequency in COPD, they do not influence mortality. For this reason, the decision to use ICS in patients with COPD must be much more cautious and more carefully targeted, requiring very precise patient characterization, because their long-term use is associated with more unwanted effects than in asthma. The following drugs are licensed for treatment of COPD: beclomethasone dipropionate, budesonide, and fluticasone propionate/fluticasone furoate. In COPD—again in contrast to asthma—ICS are used only in combination with at least one long-acting bronchodilator, usually a long-acting β2-agonist (LABA) (1). Unfortunately, in practice ICS are prescribed too often in COPD: 38.9% of all COPD patients (n = 334 out of a total of n = 859) with stage I–II disease in a London cohort received ICS as monotherapy or in combination therapy, against guideline recommendations (2). For the present review, PubMed and the Excerpta Medica Database (EMBASE) were selectively searched for randomized, controlled long-term studies evaluating the effect of ICS given to COPD patients for ≥ 1 year, alone or in combination. In addition, meta-analyses including Cochrane Reviews on particular topics were selectively included, as were review articles, 6-month studies, COPD guideline recommendations (Global Initiative for COPD [GOLD], and the recommendations of the German Respiratory Society/German Airway League (Deutsche Gesellschaft für Pneumologie und Beatmungsmedizin/Deutsche Atemwegsliga). We provide an up-to-date overview of the efficacy of ICS and their limitations, and present a recommendation for their rational use in the treatment of COPD.

Features of the various therapeutic options

Large 6-month to 3-year studies of ICS as monotherapy in the 1990s produced variable results regarding the clinical efficacy of ICS (eTable).

Apart from the TORCH study, carried out over 3 years, most of the large long-term COPD studies found that ICS monotherapy had little or no effect on lung function. Above all, whichever active ingredient was used, ICS monotherapy either failed to slow the accelerated annual decline in FEV1 seen in this patient group or slowed it very little (3–6). The Cochrane Review, which included 55 studies involving over 16 000 patients, came to the sobering conclusion that, compared to placebo, and averaged over all the studies, an ICS-induced reduction in annual FEV1 decline of only 5.80 mL/year (95% confidence interval: [–0.28; 11,88]) was achievable (e1). The main contributor to this effect was the TORCH study, which showed that FEV1 declined by 42 mL/year with fluticasone (2 × 500 μg/day) versus 55 mL/year with placebo over a study period of 3 years. However, this study included a selected patient population that responded particularly well to ICS (7). In the ISOLDE study, at the end of 3 years, inhaled fluticasone reduced exacerbation frequency from 1.32 exacerbations/year to 0.99/year (p = 0.026) and improved health status compared to placebo as measured using the St. George Respiratory Questionnaire (SGRQ) (p = 0.0043) (5).

In conclusion, the clinical efficacy of ICS monotherapy on lung function is very small; clinically, it is insignificant.

Similar results came out of the long-term budesonide/formoterol studies. The combination of budesonide with formoterol reduced severe exacerbations by 23% [0.8; 40.1) compared to formoterol alone, by 11% [–15.9; 31.8] compared to budesonide alone, and by 24% [1.9; 41.4] compared to placebo. This study too included patients who responded particularly well to ICS. Accordingly, the pulmonary function values were better in the fixed combination arm than in either of the single-component arms (10). Comparison of combined meclometasone/formoterol versus formoterol alone produced a similar result (11). Combined fluticasone fuorate/vilanterol increased the time to next exacerbation in comparison to the single component arms, but the frequency of severe exacerbations did not change.

Compared to monotherapy with a long-acting β2-agonist, additional administration of ICS resulted in a downward trend in the frequency of severe exacerbations, but not a significant reduction. However, the frequency of moderately severe exacerbations was reduced to 0.82/year [0.72; 0.92]. This allowed calculation of a number needed to treat (NNT) of 31 [20; 93] in order to prevent one exacerbation (12). Quality of life improved slightly (–1.88; 9% [–2.44; –1.33]), although without reaching the clinically relevant threshold of –4 points (13).

It may be concluded that, compared with the single components and with placebo, despite some differences in the study comparisons, and depending on the various components used, the ICS/LABA combination mainly reduced exacerbation frequency in patients with frequent exacerbations. This would suggest that ICS are only suitable for patients with grade III and IV COPD who have a higher frequency of exacerbations.

Combination of inhaled corticosteroid with long-acting ß2-agonists and anticholinergics

The value of triple therapy with a combination of ICS, LABA, and a long-acting anticholinergic (LAMA, long-acting muscarinic receptor antagonist)—an important question for clinical practice—was investigated in a meta-analysis of seven studies by Kwak et al. (14). This showed that triple therapy is clinically more effective than monotherapy with tiotropium: FEV1 improved, by 63.68 mL [45.29; 82.73], and so did quality of life (SGRQ), by –3.11 points [–6.0; –8.0]. In a 12-week study, Welte et al. showed that triple therapy consisting of tiotropium plus budesonide/formoterol in patients with severe COPD (FEV1 38% of normal) compared with tiotropium plus placebo raised predose FEV1 by 6% and postdose FEV1 by 11%. In addition, the number of severe exacerbations dropped by 62%. However, in regard to this last, the study was too short and had too few patients (n = 660) for this to have statistical significance for clinical practice (15).

The SUMMIT study, which ended in June 2015 and was reported on in an oral presentation at the annual conference of the European Respiratory Society 2015 in Amsterdam and via a press release (www.gsk.com/en-gb/media/press-releases/2015/gsk-and-theravance-announce-results-from-the-summit-copd-cv-survival-study), investigated whether the combination of fluticasone furoate (100 μg) and vilanterol (25 μg), compared to the individual components or placebo, reduced all-cause mortality in 16 000 COPD patients with increased cardiovascular risk after a treatment duration of 15–44 months. Mortality in the combination group was 12.2% lower than in the placebo group (p = 0.317). Annual FEV1 decline in the combination group was reduced by 8 mL (p = 0.019).

To conclude, the effects on lung function and exacerbation reduction when ICS are added to existing LABA/LAMA therapy are small, and are clinically relevant only in the subpopulation of COPD patients at high risk of exacerbations.

Combination of inhaled corticosteroids with roflumilast

In the REACT study, giving roflumilast in addition to LABA/ICS combination therapy reduced exacerbation frequency (0.823/year with roflumilast versus 0.995 with placebo; p = 0.0424); about two-thirds of all study patients were also treated with tiotropium (triple therapy). Thus, dual anti-inflammatory treatment of this kind is clinically more effective in the patient subtype with frequent exacerbations (≥ 2/year) and symptoms of chronic bronchitis than is LABA/ICS therapy alone (17). However, unwanted gastrointestinal effects are frequent with roflumilast.

The asthma–COPD mixed-type is currently subsumed under the term ACOS (asthma–COPD overlap syndrome) (21). Between 5% and 20% of all patients with COPD also show features of asthma. If the overlap is characterized by sputum and/or blood eosinophilia, ICS improve FEV1 significantly more than in patients in whom this type of inflammation is not dominant (19, 22). A single-center study carried out on ACOS patients in Korea did not find an ICS-related drop in exacerbation frequency, improvement of lung function, or quality of life (23). The small study size and lack of patient selection according to dominant phenotype could explain this finding. The absence of a definition of ACOS, the small number of studies carried out on this topic, and the comparative heterogeneity of the original studies make it hard to draw conclusions for clinical practice, and therefore we will not enter into this discussion here. Finally, all that remains is the recommendation to treat the primarily dominant disease in the mixed type.

Side effects and differences in efficacy of various ICS

A Canadian cohort study found that ICS increased the risk of pneumonia in COPD patients to 69% in a dose-related and duration-related manner (relative risk [RR]: 1.69 [1.63; 1.75]). The risk was higher with fluticasone treatment (RR: 2.10 [1.93; 2.10]) than with budesonide (RR: 1.17 [1.09; 1.26]), thus confirming the results of prospective studies of ICS in COPD (24). Depending on the ICS product in use, the ICS dose, and the duration of the study, but not the drug combined with ICS, a number needed to harm (NNH) of 14 to 20 was calculated for a treatment duration of 24 weeks or more (25). Despite the risk of pneumonia, exacerbation frequency fell in the prospective studies, because the pneumonia cases seen were predominantly low-grade, so this risk should not be important in practice.

After abrupt cessation of 4 months’ treatment with inhaled fluticasone (2 × 500 µg/day), the exacerbation risk at the end of the 6-month study period in the placebo group was increased by a factor of 1.5 [1.05; 2.1] compared to the group that received fluticasone (26). The findings for symptom score and quality of life reflected this. Withdrawal of fluticasone (2 × 500 µg/day) compared to continuation of the initial fluticasone/salmeterol combination therapy resulted after 1 year in an increase in the annual decline in FEV1 to –4.4% versus –0.1%. In addition, the frequency of severe exacerbations increased (1.6 versus 1.3/year) (27). In the WISDOM study, however, it was demonstrated that in stable but severely ill COPD patients (FEV1 34% of normal), gradual reduction of ICS over a 9-month observation period, during which the patients were treated only with inhaled bronchodilators, did not increase the exacerbation risk. However, lung function deteriorated significantly (40 mL) compared to the ICS group (28).

To conclude, ICS treatment slightly raises the incidence of pneumonia, but apparently only mild forms of pneumonia are involved. ICS can be gradually reduced in stable COPD patients without increasing the frequency of exacerbations.

Suggestions for the use of ICS in clinical practice

Unlike in asthma, in COPD ICS are in every respect inferior to long-term, long-acting bronchodilators for symptom control. The primary indication for their use is in patients who suffer frequent exacerbations. Regarding the correct use of ICS in COPD, we make the following recommendations (Figure):

It is essential to ensure that the prescribed inhalation systems are correctly used. Patients should be given repeated training in how to carry out their inhalation treatment properly.

Professor Kohlhäufl declares that no conflict of interest exists. 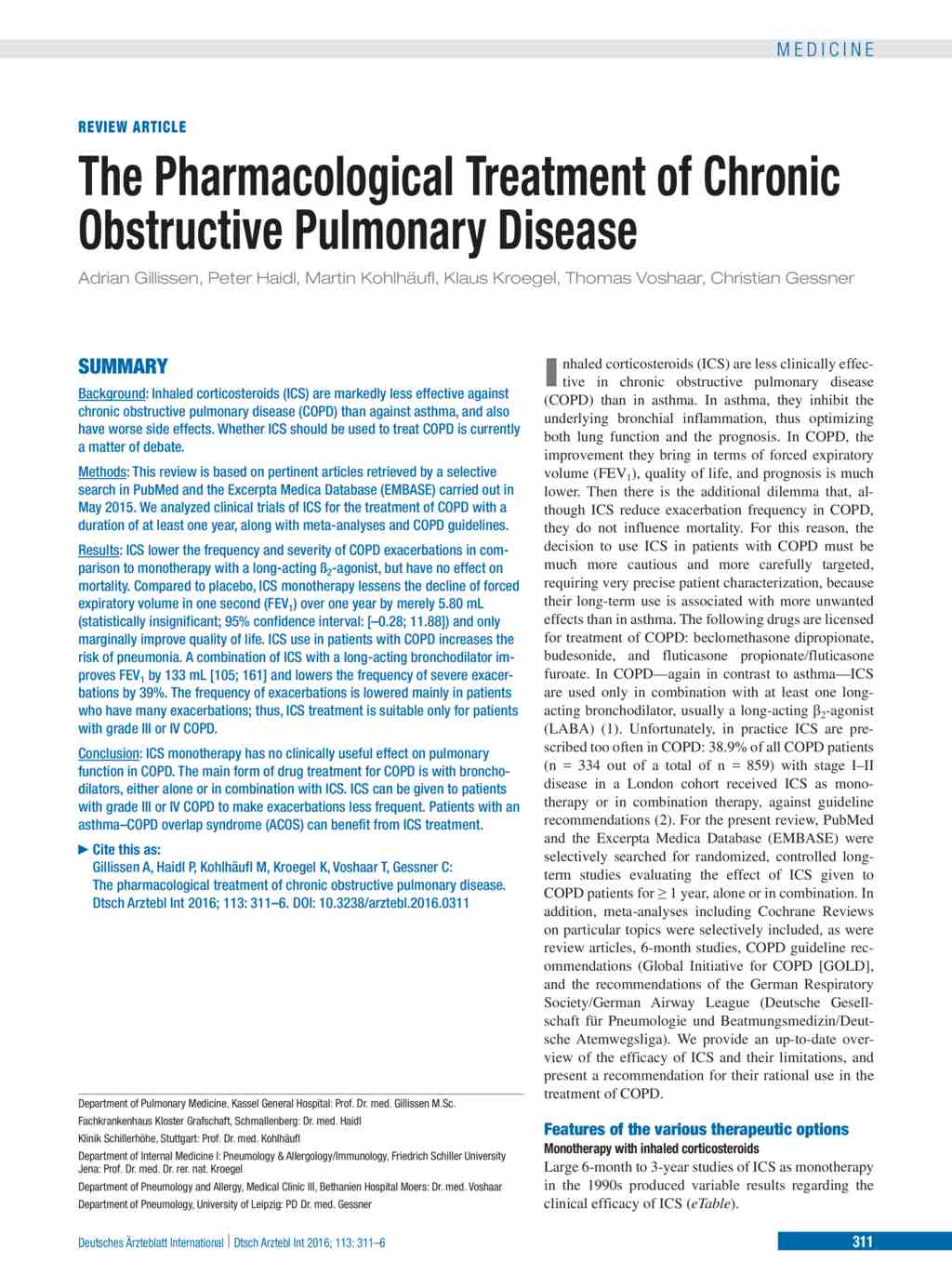