According to the article’s summary, at least 5% of patients taking statins have statin-associated muscle symptoms (1). Not much later in the body of the article, rates of 10 to 30% are mentioned. Their negative impact on quality of life is acknowledged in the introduction. It is stated that one-third of those undergoing long-term treatment with statins report difficulties under regular statin intake. Absolute values are required to assess whether taking statins helps to prevent coronary heart disease. Patients want to be able to weigh the symptoms they experience against the expected benefits.

The seven authors (only one with no conflict of interest) postulate a long-term statin compliance of 90%. Is this advisable taking into consideration the muscle symptoms and the resulting avoidance of physical exercise which leads to reduced muscle strength—especially when the body-mass index goes up?

A meta-analysis published in 2015 in the Lancet (n = 174 000, 27 studies) (2) evaluated the benefits of statin primary prevention. The study showed that statin treatment with corresponding LDL reduction over a period of 5 years per 1000 persons (male and female, respectively) prevented 9 coronary heart disease-related events in women and 12 in men. Consequently, in patients with a history of coronary heart disease, 43 severe vascular events per 1000 patients treated with statins would be prevented per mmoL LDL reduction over a period of 5 years.

A study published in 2015 (3) (n = 132 000) reported data on first heart failure hospitalization. The absolute risk of first heart failure hospitalization was 2.0% in patients treated with statins over a period of four years and 2.3% without statin therapy. A number needed to treat (NNT) of 333 was calculated; no differences in mortality were found—regardless of the history of myocardial events.

Older patients treated with statins tend to avoid physical exercise and spend more time sitting. Physical activities are hindered by muscle pain, fatigue and weakness. This is confirmed by a prospective study (4) (n = 4.137 × 73 years). Objective data were obtained using accelerometry, and a low rate of burning calories was confirmed. The weight gain resulting from reduced physical activity contradicts the goal of lowering lipids and preventing the development of obesity. Since many patients with diabetes are treated with statins, the latter is of particular importance. A meta-analysis published in 2014 found a rate of one additional diabetes case per 255 statin users, explained by reduced insulin sensitivity and insulin secretion. 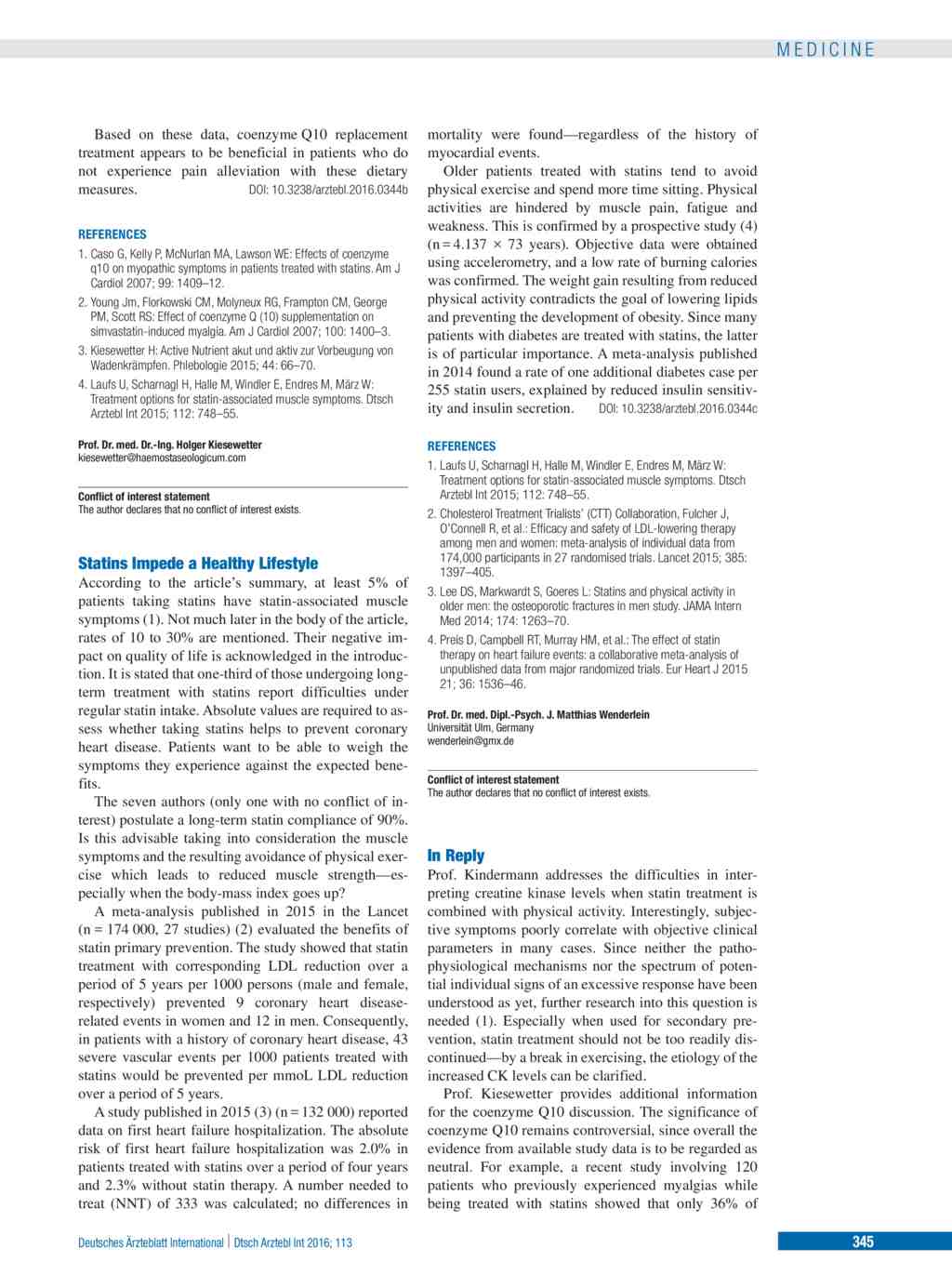