Much Ado About Noise: Health Risks of Traffic Noise

Dtsch Arztebl Int 2016; 113: 405-6. DOI: 10.3238/arztebl.2016.0405
Editorial to accompany the article: „Myocardial Infarction Risk Due to Aircraft, Road, and Rail Traffic Noise; Results of a Case–Control Study Based on Secondary Data“ by Andreas Seidler et al. in this issue of Deutsches Ärzteblatt International

Noise is defined as unwanted sound, and as such has both an objective (physical) and subjective (psychological) component. Its effects are multifarious. Sound pressure levels that are too high for too long or extreme even for a short time lead to hearing loss, which can be increasingly observed in non-occupational settings (e.g., due to music that is too loud). However, even at lower levels sound can affect an organism. These “nonauditory” effects of noise include annoyance reactions, communication interference, delayed speech development in children, and sleep disturbances (1). According to the World Health Organization (WHO), the nonauditory effects of noise are responsible for the loss of at least 1 million DALYs (disability-adjusted life years) every year in Western Europe (2).

The nonauditory effects of noise can trigger stress reactions that affect autonomic and endocrine systems and can contribute to, among other things, an increased risk of cardiovascular disease via alterations of lipid and glucose metabolism and blood pressure regulation (3). Evidence from countless experiments in humans and animals provide biologic plausibility for this association. Fortunately, the number of epidemiological studies on the health effects of noise has increased in recent years. This is important because different types of bias can distort the results of observational epidemiological studies, making it harder to establish causal relationships. In epidemiology, especially where increases in risk are small, a causal relationship is typically not accepted until an effect has been consistently shown by a variety of studies. The overwhelming majority of noise effect researchers today accept that there is a causal relationship between environmental noise exposure and increased cardiovascular risk. However, there is less agreement about the effect threshold and the strength of the relationship.

This underlines the importance of the case–control study carried out by Seidler et al. on the basis of secondary data and published in this issue of Deutsches Ärzteblatt International, investigating the myocardial infarction risk due to traffic noise exposure in the area around Frankfurt/Main in Germany (4). This study is exceptional, not just in the size of its population sample, but also in the use of high-quality noise exposure calculations for the three most important modes of transportation. Due to the absence of relevant confounding factors at the level of the individual the study has features s of an ecological study and an increased risk of bias . It thus continues a trend of other, similar studies (5, 6). A prospective study aimed primarily at the health effects of traffic noise has yet to be carried out.

The findings of Seidler et al. (4) agree with those of other publications on this topic. The authors found a significant increase in relative risk by about 2% to 3% per 10 dB increase in the continuous noise level from road and rail traffic. Compared to other established risk factors for cardiovascular disease (such as smoking), these increases in risk are small. As the authors rightly remark, however, even these small increases in risk have implications for public health policy because large parts of the population are exposed to traffic noise. In 2012 in the European Union, around 100 million people were exposed to continuous noise levels of more than 55 dB from road traffic alone (7).

No significant increases in risk were found by Seidler et al. in relation to aircraft noise. The estimated relative risks were significantly increased only when the analyses were restricted to specific periods of the day or to high noise levels and fatal cases. The reasons for this are not clear. Apart from the special noise emissions situation in Frankfurt (where there is comparatively little traffic during the night), the specific acoustic properties of aircraft noise could partly explain the negative finding, such as the spectral structure of aircraft noise and the slow sound pressure level rise times (8).

The political discussion about the health effects of traffic noise arouses a lot of emotions. It is characterized by down-playing of those who are responsible for the noise and exaggerations by those affected by it. Noise effects research attempts to decrease emotions by providing scientific evidence as the basis for political decision making. However, it cannot replace the political discussion in society (9). Transportation and mobility go hand in hand with a number of positive effects for both the economy and the individual. Society seems to accept a considerable number of fatal traffic accidents year after year (around 3500 road deaths in 2015 in Germany). The question is whether the health risks of traffic noise will meet with the same kind of acceptance.

Protection from the effects of noise

Even when health risks cannot be ruled out altogether, it is still important to keep them as low as possible. The implementation of noise legislation and the prevention of violations are a prerequisite for minimizing health risks. In future, regulation needs to take better account of the fact that sensitivity to noise in the population varies greatly between individuals (10). Regulation is particularly important because people affected by noise often have a lower socio-economic status and thus fewer options in changing their sound environment (11). Fundamentally, reducing noise at source is the most effective measure, but after decades of great progress it is now approaching the technical limits of what can be achieved. No further great strides in the reduction of sound emissions can be expected in the near future without a complete redesign of vehicles or infrastructure. All the more important, then, to have active, operational noise control measures in place (such as Continuous Descent Approach in aviation); they are preferable to passive noise control measures (such as sound-insulated windows) and are immediately effective. Spatial (e.g., pedestrian zones) and temporal restrictions on traffic (e.g., bans on night flights) can also help to reduce the effects of noise.

However, noise control starts with the individual. Targeted educational campaigns are needed to inform the public about the negative health effects of noise, so that each person can produce less noise and avoid existing noise. The health risks should not be down-played, but at the same time care should be taken not to exaggerate them in ways that will scare the public—after all, fear is also a form of stress. Studies such as the one by Seidler et al. are critically important to improving our understanding of the effects of noise, and for targeted measures to minimize these effects.

Conflict of interest statement
Dr. Basner has received a fee from the World Health Organization (WHO) for a literature review on the subject of environmental noise and sleep. He has received research funding from the Federal Aviation Administration (FAA) for research into the relationship between aircraft noise and sleep disturbances. Dr. Basner is President of the International Commission on Biological Effects of Noise (ICBEN). 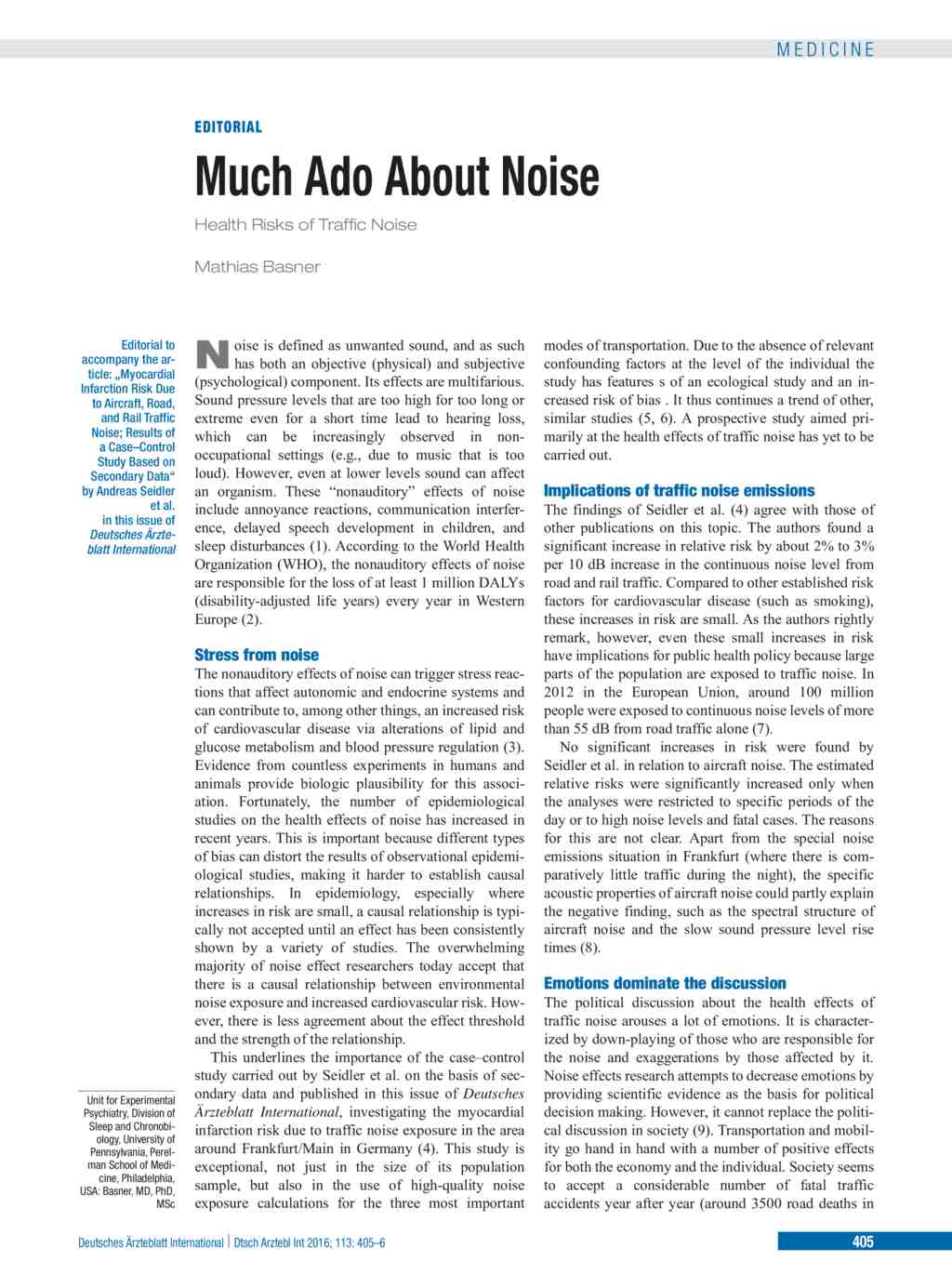