Part 23 of a Series on Evaluation of Scientific Publications

Background: In intervention trials, only randomization guarantees equal distributions of all known and unknown patient characteristics between an intervention group and a control group and enables causal statements on treatment effects. However, randomized controlled trials have been criticized for insufficient external validity; non-randomized trials are an alternative here, but come with the danger of intervention and control groups differing with respect to known and/or unknown patient characteristics. Non-randomized trials are generally analyzed with multiple regression models, but the so-called propensity score method is now being increasingly used.

Methods: The authors present, explain, and illustrate the propensity score method, using a study on coronary artery bypass surgery as an illustrative example. This article is based on publications retrieved by a selective literature search and on the authors’ scientific experience.

Results: The propensity score (PS) is defined as the probability that a patient will receive the treatment under investigation. In a first step, the PS is estimated from the available data, e.g. in a logistic regression model. In a second step, the actual treatment effect is estimated with the aid of the PS. Four methods are available for this task: PS matching, inverse probability of treatment weighting (IPTW), stratification by PS, and regression adjustment for the PS.

Conclusion: The propensity score method is a good alternative method for the analysis of non-randomized intervention trials, with epistemological advantages over conventional regression modelling. Nonetheless, the propensity score method can only adjust for known confounding factors that have actually been measured. Equal distributions of unknown confounding factors can be achieved only in randomized controlled trials.

Non-randomized studies can be an alternative for evaluating treatments. However, they suffer from a lack of internal validity: treatment allocation is not randomized and the intervention and control groups may be systematically different in terms of known and (even worse) unknown patient characteristics. Any differences between groups that arise during a study are therefore not necessarily due to differences in treatment: they may have been caused by the systematic differences between the groups.

A range of statistical procedures have been developed to take account of these differences during analysis. The standard procedures for this are multiple regression models. However, propensity scores are also being used more and more frequently (4). This article introduces propensity scores and describes and explains them in detail, first in general terms and then using an example from coronary bypass surgery. Next, the differences between propensity scores and conventional regression models are stated. The article concludes with a number of essential observations on obtaining knowledge in medical research.

The propensity score (PS) is the probability of a patient receiving the treatment being tested. In a 1:1 randomized trial, this is exactly 0.5. In a non-randomized study, this probability for each individual patient is unknown and depends on patient characteristics. The PS must therefore first be estimated from the available data. A logistic regression model in which the allocated treatment is the dependent variable and the patient characteristics before treatment are used as the independent variable can be used for this. Using the estimated parameters of this PS model, the propensity score can then be calculated for each individual patient. When selecting independent variables for the PS model, care must be taken to use characteristics that predict subsequent treatment success (rather than treatment allocation), as these limit the variance of the treatment effect without giving rise to any additional bias (5). Naturally, the PS model cannot take into account factors that are unknown or were not measured.

IPTW estimation: In IPTW estimation, each patient is allocated the reciprocal of the treatment probability associated with his/her actual treatment as a statistical weight: a treated patient receives the weight 1/PS, and an untreated patient the weight 1/(1-PS). There are mathematical reasons for this definition of weights, but it can also be interpreted intuitively (8): A treated patient with a low PS (for the treatment) receives a high weighting because he/she is similar to an untreated patient in terms of his/her characteristics (expressed as his/her low PS), so a valid comparison can be made between the two. For the evaluation of the treatment effect, patients enter the statistical analysis according to their weight.

Stratification: PS stratification is a coarsened form of PS matching. Here, the total dataset is divided into several subsets of equal size (e.g. quintiles) on the basis of the estimated PS. In each subset, treatment effect is estimated using conventional methods, and the treatment effects obtained in this way are then summarized by meta-analytic methods.

Each of these methods has specific strengths and weaknesses, but PS matching is generally described as the preferred procedure (9, 10). The main advantage of PS matching is the ability to display the recorded characteristics of treated and untreated patients explicitly, similarly to a Table 1 in a randomized controlled trial. This enables assessment of whether the distribution of these characteristics is similar in treated and untreated patients. In addition, the distribution of patient characteristics before PS matching should be shown, in order to make clear the extent to which PS matching has compensated for differences that were originally present.

Inevitably, PS matching excludes patients for whom no matching partner can be found, while all other PS methods use the entire dataset for analysis. This can result in lower case numbers and so less statistical power for PS matching, but it does have the advantage that looking at excluded patients makes clear which patients were overrepresented or underrepresented in the treatment group. As a result, no statements can subsequently be made on these subgroups either.

Finally, the question when considering PS matching versus other PS methods always involves a trade-off between a biased or imprecise estimate of treatment effect (8). PS matching should be used when the groups need to be as similar as possible (thus minimizing bias). However, because case numbers will then be smaller, a greater variance of the estimated treatment effect must be accepted. Table 1 gives an overview of the strengths and weaknesses of the various methods. The Figure provides a schematic representation of the four PS methods versus those for a randomized controlled trial and a conventional regression analysis.

The quality of a PS model should only be judged on the basis of how well patient characteristics are balanced between the two treatment groups. Neither goodness-of-fit tests such as the Hosmer–Lemeshow test (11) nor discrimination measures such as the c-statistic (12) are suitable for this. Both these procedures are inappropriate for revealing unknown confounding factors (13). Worse still, a high c-statistic is neither necessary nor sufficient for good adjustment for confounding factors. This can be illustrated by the example of a randomized controlled trial, the design of which by definition achieves a very good balance between confounding factors, but which will have a very small c-statistic (approx. 0.5) (14). Many measures have been proposed specifically to measure balance between patient characteristics (6, 15).

In the following we report on a published PS analysis on coronary bypass surgery (16) which was performed by the first and last author of this article together. It was based on a dataset from a total of 1282 patients who underwent isolated heart surgery at the Herz- und Diabeteszentrum NRW, Bad Oeynhausen between July 2009 and November 2010. Of these patients, 69.2% (n = 887) underwent conventional coronary artery bypass grafting (cCABG) with extracorporeal circulation (ECC) in cardioplegic cardiac arrest, while 30.8% (n = 395) underwent clampless off-pump coronary artery bypass (clampless OPCAB) without ECC and without clamping of the aorta. The patients’ surgeons had decided which surgery each one would undergo. A logistic regression model was used to estimate each patient’s PS. All patient characteristics used as independent variables in this model were determined a priori and are shown in Table 2. An optimal matching algorithm with a caliper width of 0.2 standard deviations of the linear predictor was used to perform a 1:1 matching (17).

To evaluate the treatment effect, three clinical outcomes were considered in the PS-matched sample (Table 3):

A standardized follow-up procedure has been established at the Herz- und Diabeteszentrum NRW, in which all patients who have undergone surgery are sent a questionnaire every year. Serious events reported in the questionnaires are validated at the treating institutions (e.g. local hospital, primary care practice). As described above, statistical analysis must account for the PS matching, for example by conditioning on the matching stratum (7). As can be seen in Table 3, clampless OPCAB is superior to cCABG in terms of all three outcomes. Qualitatively very similar outcomes are obtained using the other three PS methods and the parallel conventional regression model.

PS methods have a range of advantages over conventional regression models, the latter still being the standard method for adjusting for patient characteristics in non-randomized studies. One advantage of PS methods is that the procedure for PS analysis is similar to that used for randomized controlled trials (Figure). In particular, a PS model is estimated without using information on the outcomes of interest: only the patient characteristics present at the beginning of the study are included (21). PS model calculation is therefore part of study design, not of analysis.

Another similarity between randomized controlled trials and PS matching is that they are both two-step procedures: in the first step, efforts are made to ensure that the two treatment groups are similar in terms of patient characteristics (using randomization in RCTs and matching in PS studies). Next, in the second step, the actual treatment effect of interest is estimated in the balanced sample. In contrast, a conventional regression model is a one-step procedure: the effect of treatment on the outcome is estimated simultaneously with the other independent variables (22).

One problem with conventional regression models is that they always estimate treatment effects, even if there are such extreme differences between the treated and untreated groups that such an estimate is not sensible. Regression models can be used to make statements concerning what would have happened if treated patients had not been treated. However, this is done using information from untreated individuals who are sometimes very different than the treated patients. Information concerning untreated individuals is, by extrapolation, only estimated, rather than actually observed (8). In other words, if, for example, the oldest treated patient is a 30-year-old male, a conventional regression model will also use information on an untreated 80-year-old woman to evaluate the intervention (23).

Finally, propensity scores are particularly superior to conventional regression models for modelling rare events (24). This is because if the treatments to be compared are used frequently, but the outcome event of interest is rare, there will not usually be enough information available in a conventional regression model to estimate the association between outcome and patient characteristics (including treatment) well. In contrast, the PS model can be estimated well, because there is sufficient information available to measure the association between the allocated treatment (the dependent variable in the PS model) and patient characteristics (the independent variables in the PS model) (25).

Propensity scores cannot replace randomization but are a good alternative for analyzing non-randomized treatment studies and have epistemiological advantages over conventional regression modelling. PS matching, in particular, has a number of advantages. The most important of these is the ability to compare risk factors in the two treatment groups explicitly.

One thing, however, must always be remembered: like conventional regression models, propensity scores can only adjust for patient characteristics that are known and have actually been measured. Only randomized controlled trials can achieve equal distributions of unknown confounding factors too.

Like Borah et al. (32), we expect increasing demand from patients, clinicians, and the health-care system for evidence from non-randomized studies in the next few years. There are simply too many questions in health care for all of them to be answered in randomized controlled trials. In addition, society will not want or be able to provide either the means or the time necessary for this.

Table 3
Results for the three clinical outcomes in the PS-matched patient group
Enlarge All figures
Propensity Score: an Alternative Method of Analyzing... 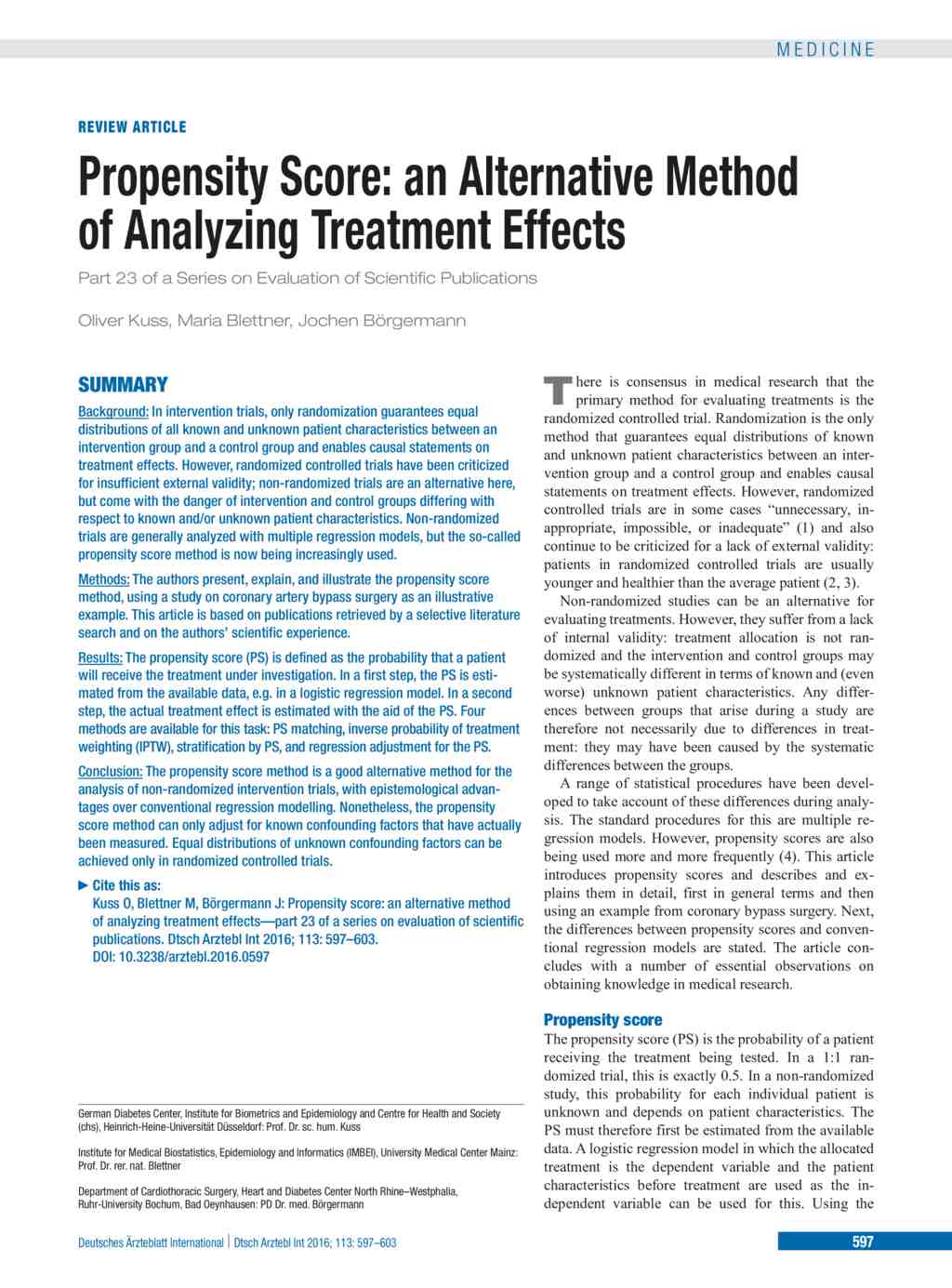