Community-acquired pneumonia (CAP) is the infectious disease that causes the largest number of deaths in Europe every year. It is also a major cost factor for the health-care system.

According to the World Health Organization’s Global Burden of Disease Study (2010), CAP causes approximately 230 000 deaths in Europe every year (2.3% of all deaths) as well as the loss of 2.2 million disability-adjusted life-years (1). These figures are somewhat uncertain, as reliable incidence figures are available for only a few countries. In Germany, we know from data acquired via the CAP quality assurance program that approximately 230 000 cases of CAP are treated in hospitals each year, with a slight upward trend (2). The study of Breitling et al., reported on the following pages, is one of the few that enable us to estimate the incidence of CAP in the outpatient setting as well (3). The authors calculate that a total of approximately 450 000 cases of pneumonia arise each year. Thus, the number of outpatient cases roughly equals the number of inpatient cases. One must bear in mind, however, that this study deals only with persons between the ages of 50 and 75. The incidence of CAP is certainly much lower in younger persons (except preschool children) and much higher in the elderly (4).

In their study, Breitling and colleagues identify classic risk factors for CAP: above all, smoking and its medical sequelae, such as chronic obstructive pulmonary disease (COPD) and chronic congestive heart failure. These risk factors were found in other studies as well (5). On the other hand, Breitling et al. did not find that other conditions such as diabetes mellitus or neurological diseases (mainly stroke) were risk factors for CAP. This may be because the patients they studied were too young to have a high incidence of these conditions.

The most important achievement of Breitling et al. in this study is that they have not only provided us with robust incidence data, but have also made plain the enormous health-economic significance of CAP. In a survey about pneumonia that Antoni Torres and I conducted all over Europe, we found that most people are aware that pneumonia is a common illness, and that it can be very serious or even fatal. Nonetheless, 90% of the respondents thought that the risk of pneumonia applied only to other people, not to themselves (6).

The study by Breitling et al. reveals that certain underlying conditions predispose patients to CAP, but also that healthy persons without any such condition can develop CAP and even die of it. The widespread underappreciation of the risk that any of us might develop CAP at any time has led to the neglect of essential preventive measures. As Breitling et al. point out, the treatment plan for CAP generally does not include informing the patient thoroughly about the need to quit smoking. The European survey revealed that the two most important types of preventive vaccination, i.e., annual vaccination against influenza and vaccination against pneumococci (the most common pathogen causing pneumonia), are not being implemented well in any European country at present. Germany performs particularly poorly with respect to vaccination rates (6). The survey unfortunately confirmed the findings of the CAPNETZ study, published five years earlier (7).

There are deficiencies not only in the prevention of CAP, but also in its diagnosis and treatment. The respiratory rate, a simple and reliable marker of the severity of the disease, is not routinely measured and documented by all physicians (8). The blood oxygen saturation level can reveal hypoxemia, a clear sign of the need for hospitalization (9), but it is not measured often enough. In-hospital mortality is highest, not among patients who are admitted directly from the emergency department to the intensive care unit because of the severity of their condition, but rather among those who deteriorate on the normal inpatient ward while their need for intensive care goes unrecognized (10).

What consequences ensue from all of these facts? Cardiac mortality has declined now that public information campaigns have made it clear to all citizens that a risk exists and have imparted widespread knowledge of the main clinical manifestations and of the actions that need to be taken should they arise. This was the necessary prerequisite for medical progress to be translated into reduced mortality. A similar process is now needed for CAP. The population at large must be better informed about this disease. The risk factors for CAP should be made widely known, so that avoidable ones (e.g., smoking) can be avoided and unavoidable ones (e.g., already established chronic disease) can heighten vigilance for the early symptoms of CAP. Vaccination campaigns are needed as well to increase public awareness of the need for vaccination. The further development of radiological techniques such as computerized tomography and magnetic resonance imaging ought to make them less expensive and more readily available, which should facilitate the diagnosis of CAP particularly in those persons who are at high risk (11). Not least, knowledge about infectious diseases in general, and pneumonia in particular, needs to be imparted more effectively to medical students, residents, and trained physicians, as part of the medical school curriculum, specialty training, and continuing medical education, respectively (12).

Pneumonia can strike anyone at any time, and it can kill. This is what the study of Breitling and colleagues serves to remind us. 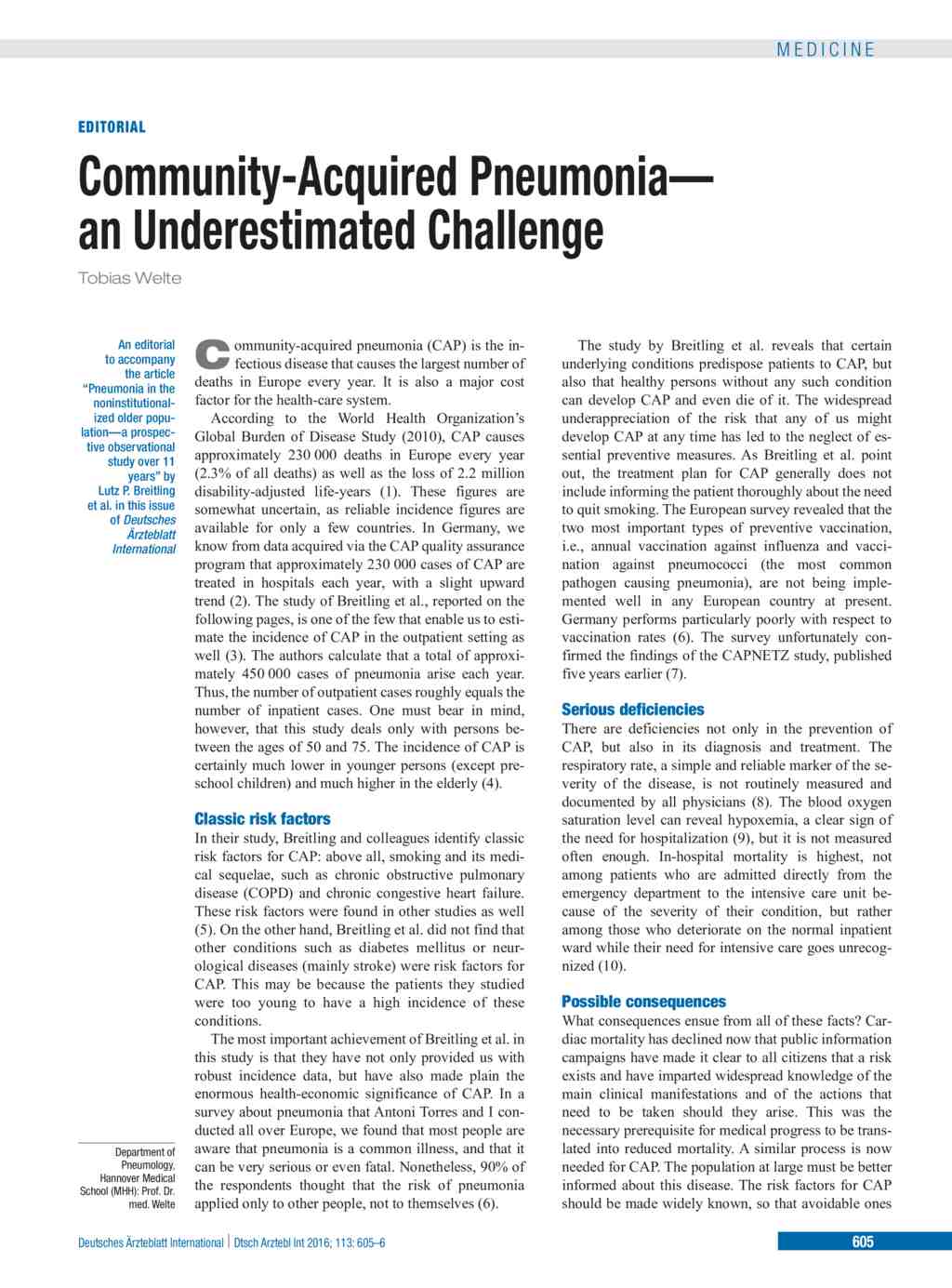