Maibaum questions in his letter why, in spite of lacking any effect on all-cause mortality, treatment with ezetimibe is recommended in certain circumstances. The IMPROVE-IT Study showed that the primary endpoint (cardiovascular events) can be reduced significantly. If secondary endpoints are also changed (or not, as the case may be) that obviously deserves mentioning and is worth discussing, but this does not change the primary conclusion of the study. It is therefore correct that ezetimibe can, and should, be used in certain patients in certain circumstances. This is now also stated explicitly in the revised US recommendations (1).

The second question is whether target-oriented therapy is really superior to a “fire & forget” strategy. In addition to the fact that some patients respond better than others to certain treatments (consequently, higher or lower doses can be usefully deployed) it was shown that a “fire & forget” strategy is associated with poorer compliance and poorer cardiovascular survival (2). Let me re-emphasize that the US ACC/AHA guidelines of 2013 do not propose an exclusively fixed-dose strategy but that the authors assume that high-dose statin treatment results in a reduction in LDL concentrations of >50% and treatment with a moderate dose to a reduction of 30–50% in LDL. This may vary substantially in the individual case, so that measurements and adapting the strategy seems sensible (1, 3).

Egidi in his letter touches on many interesting questions that are of great relevance in clinical practice. Plaque regression on intravascular ultrasound correlates—in as far as data are available on this—with the rate of cardiovascular events; consequently, such studies continue to have an indicator function for outcomes trials, which are to be conducted at a later date.

It is entirely correct that communicating LDL cholesterol concentrations and discussing target values improve patients’ adherence to statin treatment. It seems obvious that patients have to be included in this process.

The clinical classification of dyslipidemias helps to decide which strategy is most likely to yield the desired outcome. Hypertriglyceridemia is very sensitive to lifestyle measures, but in patients with increased LDL cholesterol values this is not a promising approach. Nutritional/dietary recommendations regarding hypertriglyceridemia (almost complete alcohol abstinence, reduction in intake of rapidly metabolized carbohydrates) have changed little in recent years. Regarding dietary cholesterol intake, recent data have shown that this is likely to affect cholesterol concentrations to a very limited degree, but these findings have not remained unopposed (4, 5).

Schurig in his letter emphasizes that the ESC guidelines and the suggested therapeutic algorithm are of questionable value because of numerous conflicts of interests. This does not change the fact that statin treatment and combined treatment with a statin and ezetimibe have been investigated in endpoint studies and were found to be superior.

In translating this evidence into concrete instructions for action, a certain scope for interpretation remains, for example as a result of considering and weighting additional evidence. Defining target values is one possible interpretation, and as a result of this, the suggested algorithm. The article explained in detail that unequivocal studies showing superiority for target-oriented therapy with a relevant algorithm are lacking, but in the author’s view, numerous arguments speak in favor of delivering target-oriented therapy following the suggested algorithm (6).

Dolscheid-Pommerich and Stoffel-Wagner in their letter raise the problems associated with measuring lipoprotein(a). However, the fact is that in spite of a strong genetic determination and the negligible effect of exogenous factors, lipoprotein(a) levels are subject to a certain amount of variability. However, usually this does not mean dramatic changes in lipoprotein(a) concentrations. For the purposes of risk assessment, however, a rough classification (normal, slightly raised, strongly raised, very strongly raised) is usually sufficient. When evaluating consecutive levels in an individual patient, attention has to be paid to the methods that were employed, as these may have an effect on the measurements. 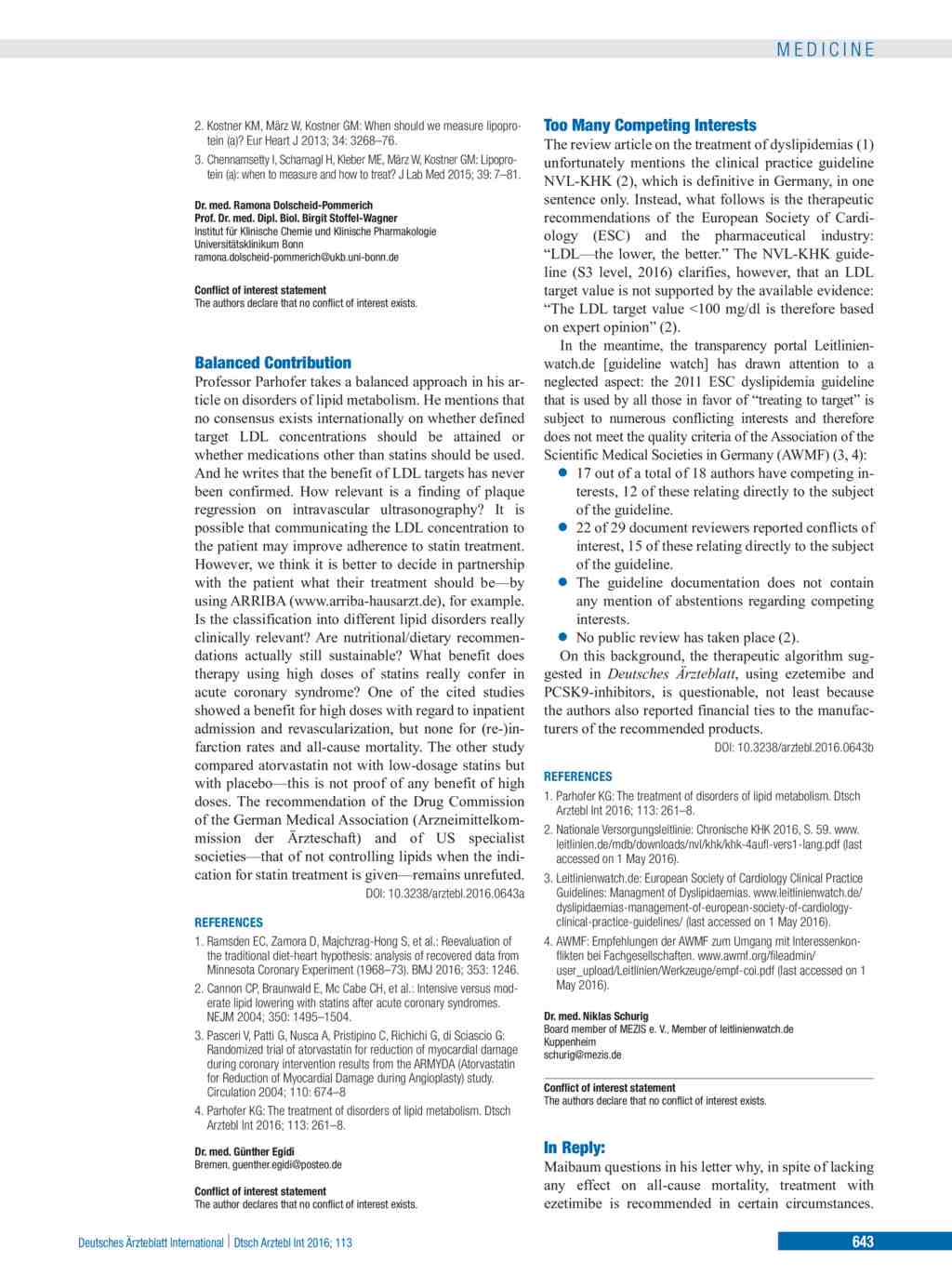