We would like to thank Prof. Dr. Abholz for his comments on our study (1). The question of whether over-coding driven by monetary interests is contributing to a steady rise in sepsis incidence is the subject of international controversy. However, there is clear evidence that, as in other countries, under-coding also occurs in Germany (2).

Germany has particularly strict guidelines on coding practices, which are regularly monitored by the medical service of the health insurance companies in Germany (Medizinischer Dienst der Krankenversicherung, MDK).According to these guidelines, only patients for whom a blood culture has been performed can be coded as septic. If positive, two of four SIRS (systemic inflammatory response syndrome) criteria need to be fulfilled: tachycardia, tachypnea, hypo-/hyperthermia, and/or leukocytopenia/leukocytosis. This is more likely to result in under-coding—particularly when compared with the clinical consensus criteria. Moreover, blood cultures are not performed for all patients, and only 50% of those that are performed are positive.

In approximately 12% of SIRS-negative cases, severe sepsis is nonetheless present (3). Considerable under-coding was also demonstrated in a validation study in Jena, Germany, based on an analysis of more than 1000 patient records. This analysis revealed 3.5-fold under-coding compared with the clinical diagnosis in the patient record.

The incidence rate on which the calculation was based relates to the total population, i.e., including individuals that were not treated in an in- or outpatient setting. Thus, a lower incidence in the primary care practice is always possible. Due to the severe deterioration in a patient’s general condition and the onset of organ dysfunction, one can assume that, in the majority of cases, outpatients developing sepsis bypass the primary care practice and present directly to hospital. The other 50% develop sepsis in hospital. Concrete epidemiological studies on the number of sepsis patients in the primary care sector would doubtless be of interest.

Conflict of interest statement
Prof. Reinhart has served as a paid consultant for Adrenomed and has a personal relationship with InflaRx
Carolin Fleischmann states that she has no conflicts of interest. 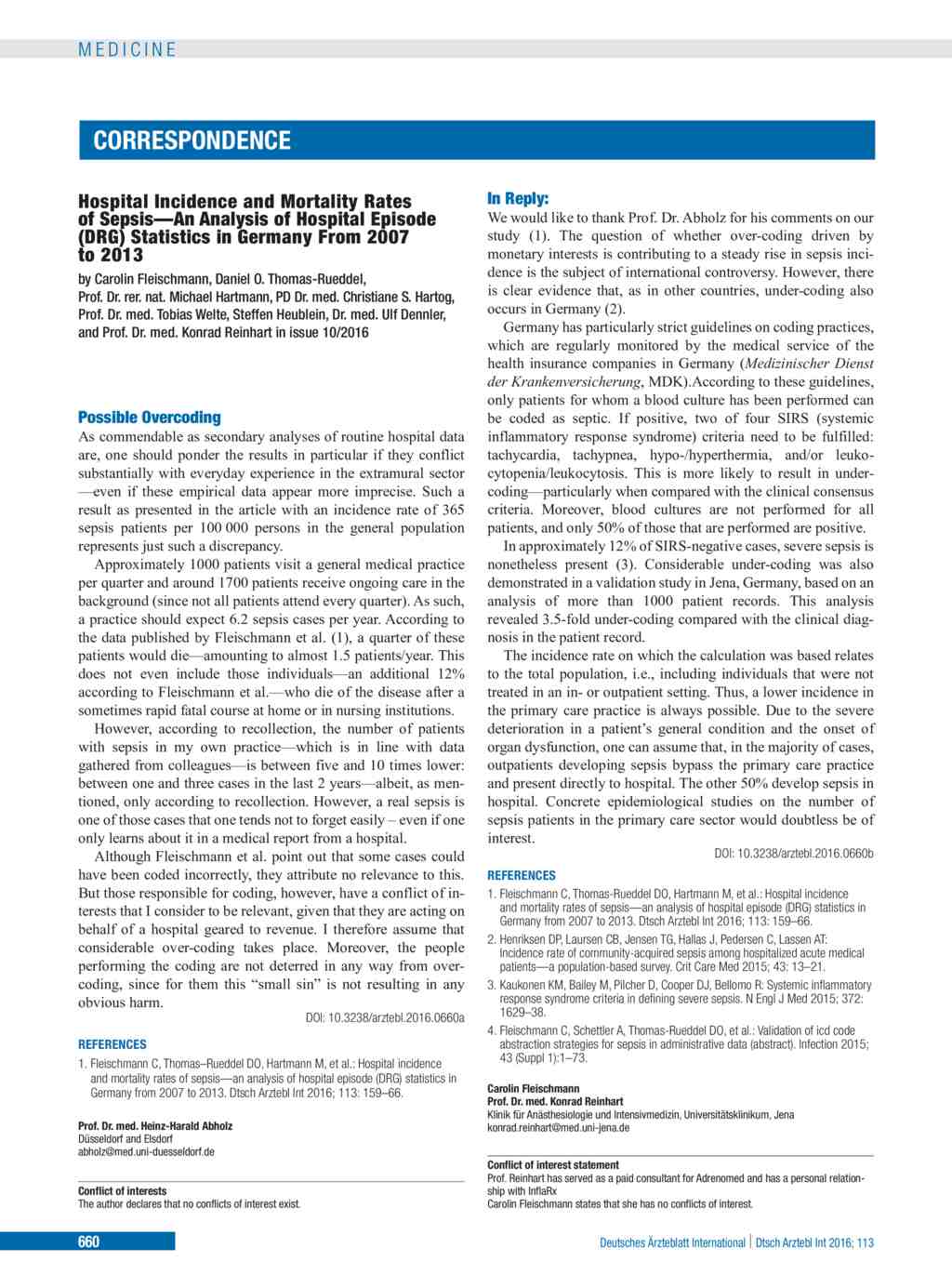