Tattoos and Their Potential Health Consequences

Dtsch Arztebl Int 2016; 113: 663-4. DOI: 10.3238/arztebl.2016.0663
Editorial accompanying the articles: „The Risk of Bacterial Infection After Tattooing“ by Ralf Dieckmann et al. und „From the Tattoo Studio to the Emergency Room“ by Sven Jungmann et al. in this issue of Deutsches Ärzteblatt International

People have been having tattoos for thousands of years; however, tattoos have a very different status in the world’s different cultures and countries. In recent decades, large parts of the Western world have undergone a sea change, and negative attitudes towards tattoos have become notably less pronounced. Pioneers of this trend are particularly persons with tattoos who are in the public eye, such as actors, musicians, and sports personalities/athletes. Potential medical consequences, such as infections owing to bacterial contamination, or allergic reactions only rarely become visible in public. For this reason, two articles in this issue are dedicated to the topic.

Tattoo inks may occasionally be contaminated by microorganisms. Dieckmann et al. (1) conducted a systematic literature search on clinical infections resulting from tattoos. Their results showed substantial pollution of tattoo inks with different bacteria. These included Staphylococci, Streptococci, and Pseudomonas spp., and all this in spite of the usual addition of preservatives such as parabens, formaldehyde, phenol, or methylisothiazolinone (2). Still it often remains unclear whether any occurring infections are the result of contaminated tattoo inks, unhygienic procedures in the tattoo studio (for example, as a result of poorly disinfected skin), or unhygienic behavior of people directly after having had a tattoo. The authorities are already discussing substituting the open containers of tattoo ink that are used for several applications with one-way containers, so as to prevent potential contamination with microorganisms.

Jungmann et al. (3) described a severe systemic reaction that occurred some 5 hours after a tattoo had been applied. It started with a swelling in the area of the tattoo and ended with the patient admitted to the emergency room with systemic grade 3 anaphylaxis. Such severe disease courses have been described in the specialist medical literature in very rare instances. Notably more common, and equally as impairing, are local reactions in the area of the tattoo, which may also trigger scattered reactions, especially in areas where red tattoo inks were used. Therapy of such localized reactions can be tedious and, in some cases, excision is the only option (4).

Tattooing is mostly performed in tattoo studios. The inks either come from specialist suppliers or are purchased from the Internet. Electrical tattoo machines use vibrating pointed needles to push the tattoo inks into the skin, about 2.5 mg per cm2 of skin (5). Some of the ink remains in the dermis and forms the colored tattoo; some of the ink is transported away from the skin via the vasculature or lymphatic system; it will end up in other organs or will be excreted. Colored lymph nodes near tattooed areas have been known as a phenomenon for some time (6). To date no studies have been conducted into which organs may be thus affected.

Analyses and surveys have shown that tattooist habitually use modern industrial pigments for colored tattoos (7), which have a brilliant color contrast and are water-insoluble. Both attributes are of crucial importance for a lasting professional tattoo.

Usually tattoo artists receive their inks as ready-made suspensions. These contain primarily the color-giving pigment, but they also contain a multitude of additional substances because no internationally valid standards exist for the manufacturing of tattoo inks as these are not medical products, cosmetics, or pharmaceuticals. Tattoo inks contain different source materials and contaminations of the used industrial pigments, cleavage products, solvents, emulsifiers, binders, anti-foaming agents (for example, polydimethylsiloxane), preservatives (for example, parabens, phenol, methylisothiazolinone), metals (for example, nickel, cobalt, chromium) as well as contaminations with polycyclic aromatic hydrocarbons or phthalates. Tattoo inks are also often contaminated with different microorganisms.

According to a recently published document from the European Union’s Joint Research Center (JRC), tattoo inks can contain up to 100 different individual substances (2). It is therefore not surprising that tattoos continue to cause health problems.

The prevalence of health problems

It is thus far completely unclear as to how often health problems occur in association with tattoos. With the exception of very few studies and surveys, valid epidemiological studies are lacking (8, 9). In view of the large numbers of persons with tattoos this situation is not sustainable. In Europe, some 12% of the total population have tattoos (2), in the US as many as 24% of the population do (10). For products that may pose a risk to consumers, the European Union has the RAPEX (Rapid Alert System for Non-Food Dangerous Products) system, but up to 2016, only 136 entries concerned the topic of tattoos (2).

The European Commission has reported on the topic of consumer protection in the context of tattoos (2) and thus specified a policy framework. However, it is currently not clear when and to what extent the long identified problems relating to tattoos will be tackled by means of appropriate legal regulations at the European level.

This is especially the case for allergenic substances and adherence to hygiene measures, but also for avoiding toxic and carcinogenic substances in tattoo inks. Some national states have issued legal regulations for tattoo inks on the basis of resolutions from the Council of Europe (ResAP[2003]2, ResAP[2008]1). These include the tattoo ink act, which came into force in 2009 and represents merely a negative listing with regard to the ingredients of tattoo inks. More recent developments are being discussed with the involvement of the European Chemicals Agency, on the occasion of the 2017 congress of the European Society of Tattoo Pigment Research (ESTP), in the presence of doctors, tattoo artists, and manufacturers of tattoo inks. 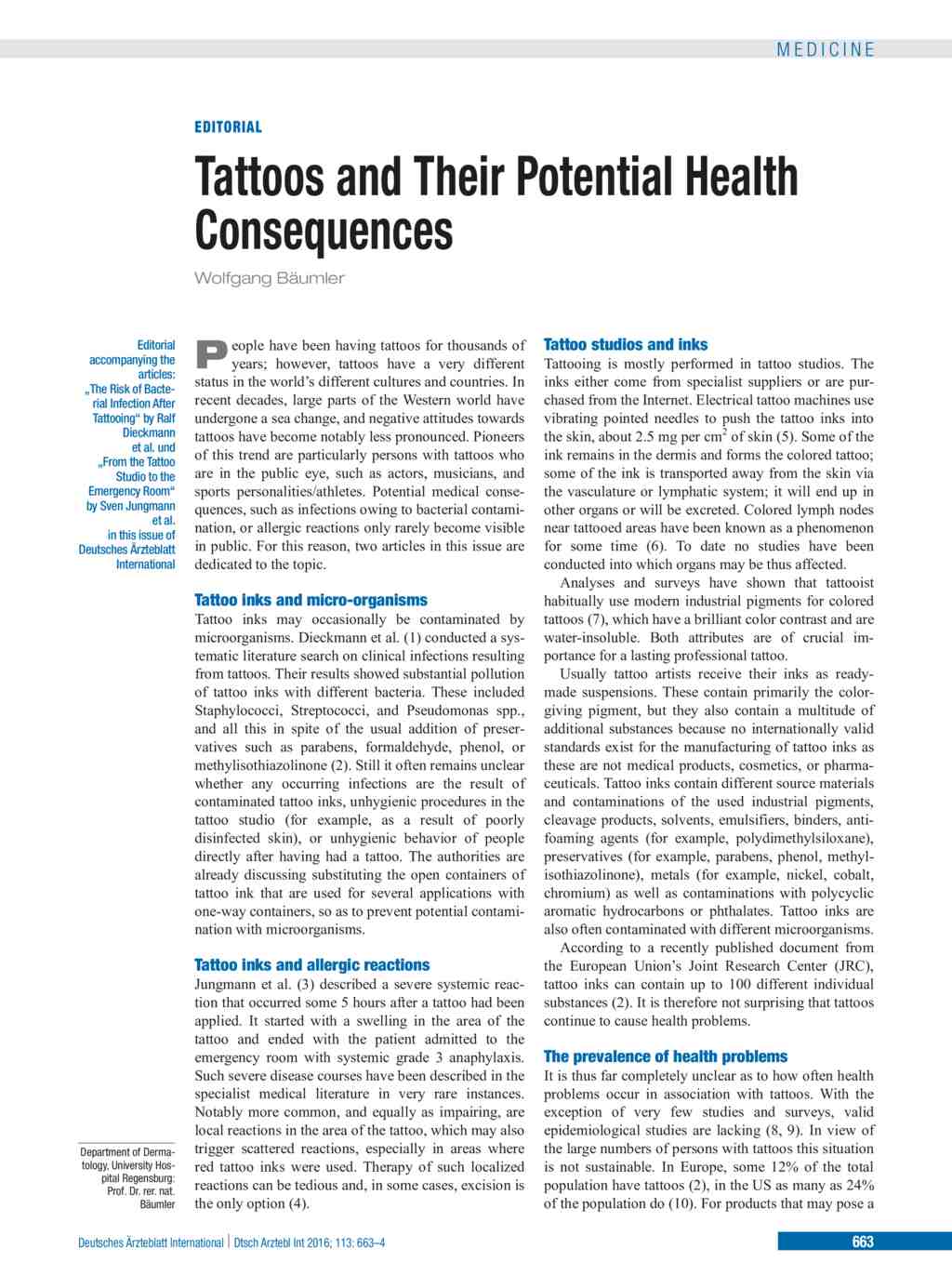