From the Tattoo Studio to the Emergency Room

Background: While subepidermal skin inking as a fashion trend has rapidly gained popularity in Western societies, systemic anaphylaxis as a complication of tattooing has only been described once in refereed literature. Furthermore the previously reported case was from a patient who already suffered from severe allergies and no attempt to pinpoint the actual causes was made.

Case Summary: We present the case of a 59-year-old man, who developed a progressive swelling and redness five hours after receiving a tattoo. Another hour later he appeared in the emergency room with a grade 3 systemic anaphylaxis. He presented with rapidly progressing swelling and redness of the tattooed left arm, left cheek and lips as well as tongue. Allergies were not previously known in this patient. He responded well to treatment with prednisolone and antihistamines. Further workup identified formaldehyde, nickel, and manganese in the inks as potential chemical triggers of the patient’s symptoms. The patient refused further allergological work-up, such as prick testing.

Conclusion: Clinicians should be alert to the potential capacity of tattoo inks to act as triggers of systemic anaphylaxis. Policymakers should attempt to better restrict the use of known allergenic compounds in commercial tattoo inks.

Subepidermal skin inking as a fashion trend has rapidly has rapidly spread throughout Western societies in the 21st century (1). Some 120 million people in North America and Europe are tattooed (2, 3). Nevertheless, tattoo-related health risks are insufficiently characterized and health effects of inks applied have never been tested in animals or humans (1). Among the current list of tattoo-related acute health effects are infections and local inflammatory and allergic reactions (1). Nevertheless, professional tattoos are generally considered safe, presumably because there is a dearth of reports on life-threatening cases as the one described below.

At 3 pm, a subjectively healthy 59-year old German man living in the Berlin-Brandenburg area had his left forearm tattooed to cover up a tattoo he had obtained in his early twenties (size of the freshly applied black and white tattoo: ≥ 7 x 12 cm2). Five hours later, he noticed progressive swelling and redness around the tattooed area which had progressed to grade 3 systemic anaphylaxis when he was brought to our emergency department an hour later. His chief complaints included rapidly increasing swelling, redness of the left arm, left cheeks, lips and tongue. This led to progressive dyspnoea, and burning sensations in the affected areas and retrosternally. He denied similar episodes and known allergies. The patient reportedly did not consume any unusual foods or medicines. His medical history was positive for

Because of the potentially life-threatening condition, the patient was given intravenous clemastine hydrogen fumarate (2 mg), an H1-receptor antagonist, and prednisolone 21-sodium succinate (1 g), which resulted in rapid clinical improvement. However, we admitted him to our hospital for further observation because of the possibility of a bi-phasic or prolonged allergic reaction and decided to discharge him in only after two days because difficulties swallowing persisted for 36 hours. We assume that the offending agent must have been carried to excretion through the lymphatic system, which explains the full recovery not before the medication effects waned.

The patient was informed that further allergological work-up (e.g. prick-testing) was indicated to help avoid further exposure to harmful compounds. Yet he did not consider this a priority since he decided to never have another tattoo performed again. Moreover, he did not expect to change his lifestyle and nutritional habits, which thus far proved safe for him. He did agree, however, to present to our outpatient department for a follow-up evaluation of his C1q complement which was found to be mildly elevated (209 mg/l, reference range: 124–190 mg/l) and C4, which was normal, making a C1 inhibitor deficiency or dysfunction unlikely as a cause for the anaphylaxis.

Ink analyses: After the allergic symptoms resolved, our patient sought information from his tattooist on the inks applied. In the following, two samples of each of those inks obtained from the original supplier were analyzed by inductively coupled plasma mass spectrometry (ICP-MS), high-performance liquid chromatography (HPLC-UV), and gas chromatography coupled to mass spectrometry (GC-MS) according to their contents on altogether 28 different substances, comprising elements, formaldehyde and other preservatives, such as parabens and isothiazolinones, respectively. To this end we used validated protocols that can be provided upon request. The most important analytical results of the inks obtained in the first purchase are compiled in Table 1. The black ink revealed a content of 63 mg total and 11 mg free formaldehyde/kg. We also detected nickel and manganese at concentrations of 5.2 and 60 mg/kg, respectively. The formaldehyde levels measured in the same kind of black ink from the second purchase were 106 (total) and 67 (free) mg/kg ink.

Our literature search (PubMed Central, Ovid and Web of Science) identified articles published up to September 20, 2015 using the keywords „anaphylaxis“ and „systemic allergic reaction“ in combination with the keywords „tattoo“, „subepidermal ink“, „subepidermal inking“ (24, 2, and 15, respectively) in title, abstract and body. Articles that did not address the issue of anaphylaxis and its relationship with subepidermal tattooing were omitted, leaving 2 relevant papers.

Strengths and limitations: This report adds to the scarce body of literature concerning systemic allergic reactions to subepidermal skin inking. Only one report (4) describes a case of anaphylaxis in a 30-year-old atopic woman (previously diagnosed with seasonal allergic rhinitis, asthma, eczema, and animal allergies to dogs, cats, and horses) after receiving her third and fourth tattoo in 1999. She underwent an allergy prick skin testing. It was positive for 2 out of 13 different ink colors made by 2 different manufacturers. The patient did not develop systemic anaphylaxis though. Unfortunately, the authors did not mention the time lag between the prick testing (whose findings were published in 2009) and the allergic reaction (1999) and it is further unclear whether the tested inks were similar to those applied a decade earlier. Also, hereditary angioedema as a possible cause had not been ruled out. In another paper, Teixeira et al. present the case (5) of an atopic female, who developed allergic reactions (but no anaphylaxis), after having her eyelashes tinted with a permanent black dye that contained para-phenylenediamine, which has been reported to cause acute hypersensitivity reactions including anaphylaxis when used in hair-dye (6).

On the other hand, our approach also has limitations.

In 2003 and 2008, two resolutions were published by the Council of Europe regarding the safety of tattoo products. Although not legally binding to European member states, the more recent bill [i.e., ResAP(2008)1] suggests that preservatives may be used to ensure preservation of the products after opening. Since formaldehyde is commonly used in cosmetic products and—moreover—tattoo inks are usually but falsely perceived being nothing else than cosmetics, it is not surprising that this compound occasionally can be also detected in tattoo inks (1).

While formaldehyde is unable to penetrate through an intact epidermal barrier made of cornified keratinocytes (ie, Stratum corneum), direct injection into living and vascularized dermal tissue may result in immediate systemic bioavailability. Besides rhinitis, asthma and contact dermatitis (7), anaphylactic reactions due to formaldehyde have been described in the case mentioned above (4), and after hemodialysis or endodontic treatment (8, 9). For nickel and manganese, no such association to anaphylaxis has been reported yet. Both elements are strong contact allergens though (10). Thus, a combined effect of the preservative and metal impurities becomes highly likely.

This assumption is further supported by the analytical results obtained in our study. Out of the 28 substances selected for analysis based on regular complaints in the frame of market surveys (11–13), no other culprits that might have been responsible for the induction of anaphylaxis could be detected at considerable levels. In particular, conspicuous preservatives such as bronopol, various parabens, sodium benzoate, 2-phenoxyethanol or the commonly used isothiazolinones, eg. 2-methyl-4-isothiazolin-3-one and 5-chloro-2-methyl-4-isothiazolin-3-one, did not exceed their individual detection thresholds. In general, the risks associated with allergens in tattoo ink should be considered not just by clinicians but also by policy-makers and stakeholders within the tattoo-industry.

The present case highlights the need for an increased awareness of risks associated with the dermal injection of inks. It also calls for a tighter regulation of products used in tattooing, increasing public and industry awareness, and the development of analytical means to get more knowledge on its constituents. Recognizing tattooing as a unique scenario that overcomes the skin barrier, it seems obvious that current measures are insufficient to protect consumer health (1).

Written informed consent was obtained from the patient described in the case report. No ethics committee approval was necessary. The article was written in adherence to the CARE guidelines (14) for clinical case reporting.

No external funding was obtained. 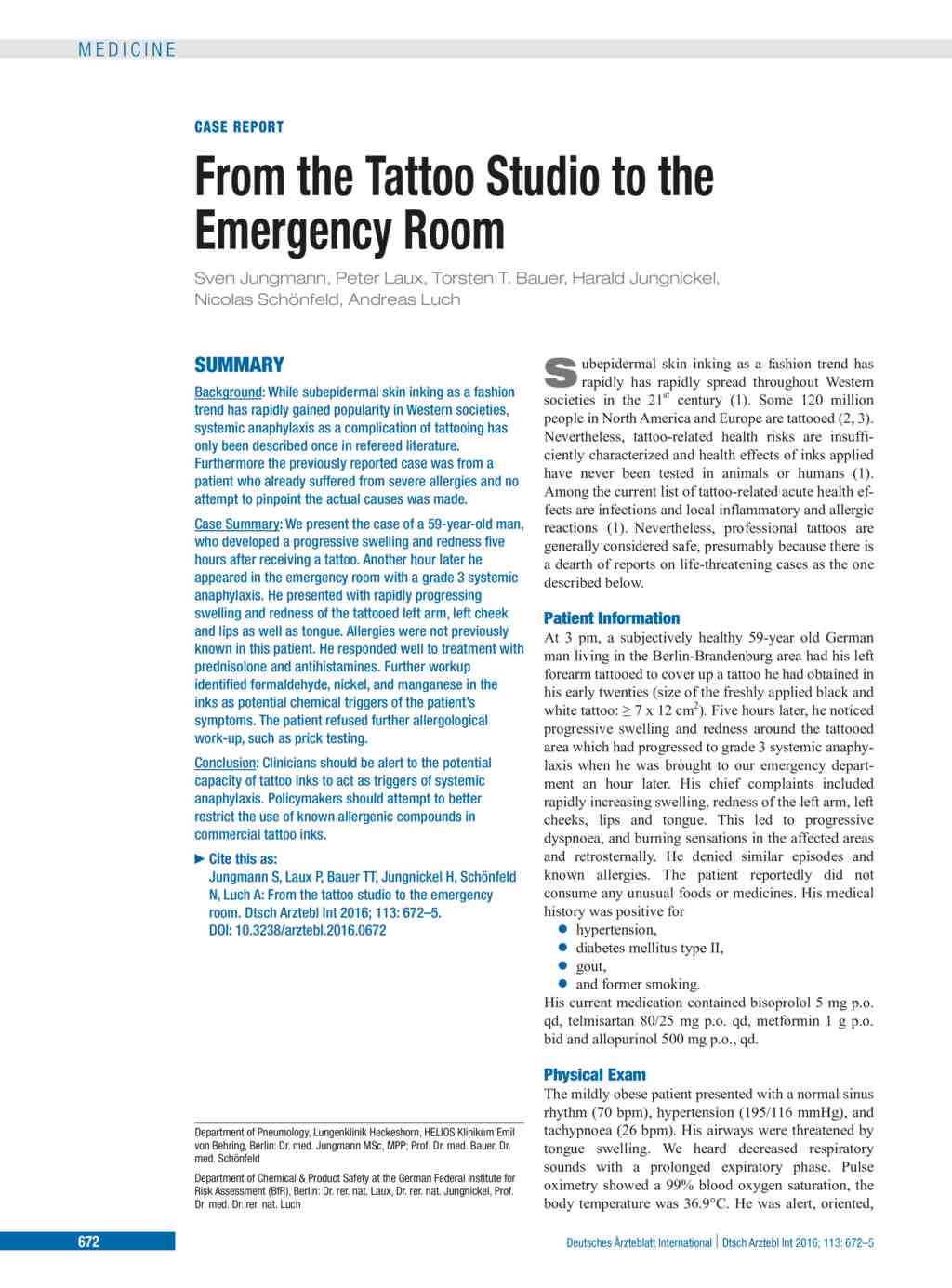