How Can Compliance With Hand Disinfection be Improved?

Of all infections in German intensive care units, 19% are caused by nosocomial pathogens (1). An observational study found a prevalence rate of 28% for nosocomial infections in a German university hospital (2). This high rate comes despite intensive efforts to improve hospital hygiene. Hand hygiene is an important part of successful hospital hygiene (3, 4), and there is consensus that a direct relationship exists between improved hand hygiene and a decrease in nosocomial infections (5–7). Improving hand hygiene should therefore be a basic step when infection rates are high. A project to attempt this was recently completed at Hannover Medical School (MHH, Medizinische Hochschule Hannover).

After hand hygiene compliance had initially improved as a result of the Clean Hands Campaign (Aktion Saubere Hände, ASH), it was found to have fallen again among some medical staff, particularly physicians.

In their randomized controlled trial (PSYGIENE), the findings of which are presented in this issue, von Lengerke et al. investigated the effects of a behavioral psychological intervention (8). The PSYGIENE trial is the first in Germany that has attempted to promote hand hygiene compliance after a return to old behavioral patterns, and in which tailored behavioral change techniques (BCT) were used.

As part of the trial, compliance by physicians and nurses in 10 intensive care units and 2 hematopoietic stem cell transplantation units at the MHH was ascertained using a questionnaire survey. In addition, employees were asked about hand hygiene and trained in self-reflexive techniques. Twenty-nine BCTs were used in the intervention arm (6 wards) in training and feedback discussions. ASH trainings were provided as a control.

The primary outcome was the change in hand hygiene compliance rates in 2014 and 2015, using the previous year (2013) as the baseline.

The tailored behavioral psychological interventions had a positive effect on compliance. However, the findings indicate that further optimization is needed. This is unsurprising, as the technique was being used for the first time.

On the basis of the trial findings, it can be concluded that the behavioral psychological measures used, in combination with self-reflexive techniques by participants, apparently achieved more than current standard practice. It is plausible to assume that the authors were faced with resistance on the part of trial participants. If this is accepted, the selected approach may be far more effective, indicating that behavioral psychological issues may play a key role in hand hygiene which remains insufficiently appreciated.

In any case, it is clear that this method helps at least in overcoming drops in hand hygiene compliance following initial successes. However, substantially more can be expected: precisely because it was successful ad hoc, the method used here seems to be suitable for optimizing hand hygiene in medical settings. The following factors are crucial to success:

One important issue should not be overlooked when evaluating the trial findings: the method is intended not only to improve compliance but also, naturally, to help achieve the core aim, prevention of infections. Unfortunately, this article (8) did not record the rate of nosocomial infections. Although in many hand hygiene studies published in the last decade it is accepted as fact that improved hand hygiene can successfully combat nosocomial infections, this should also be shown in the setting of the PSYGIENE trial.

Another question that remains open is whether the measures used in the trial might not hinder other aspects of infection prevention. This question must be addressed in future studies. It is therefore essential that, for all measures, compliance data be related to nosocomial infection rates recorded in parallel, and interpreted in this light.

Benefits of the PSYGIENE trial for infection prevention

It is quite clear that this intervention cannot simply be applied to all hospitals. The success shown in the trial requires experience with the intervention and availability of the necessary human and material resources. Usually, these are not available in hospitals; not yet. This is therefore a flagship project in hospital hygiene, and routine implementation in other hospitals remains far off.

Future research projects will explore effectiveness. They will also develop the feasibility of hospital hygiene even outside larger medical centers and evaluate it on the basis of the incidence of nosocomial infections. It should be determined whether relapses, i.e. drops in compliance after initial rises, occur here too.

Quite logically, the authors emphasize the need for research and development in order to define quality criteria for the tailoring of interventions as a suitable way to adapt BCTs derived from interventions that are well grounded in theory (9). Evaluation is also required of whether the trial findings can be extrapolated to general units or hospitals that provide regular or specialized care.

We can only hope that the response to this innovative approach will be found in follow-up projects that are as numerous, skillful, self-reflexive, and creative as possible. 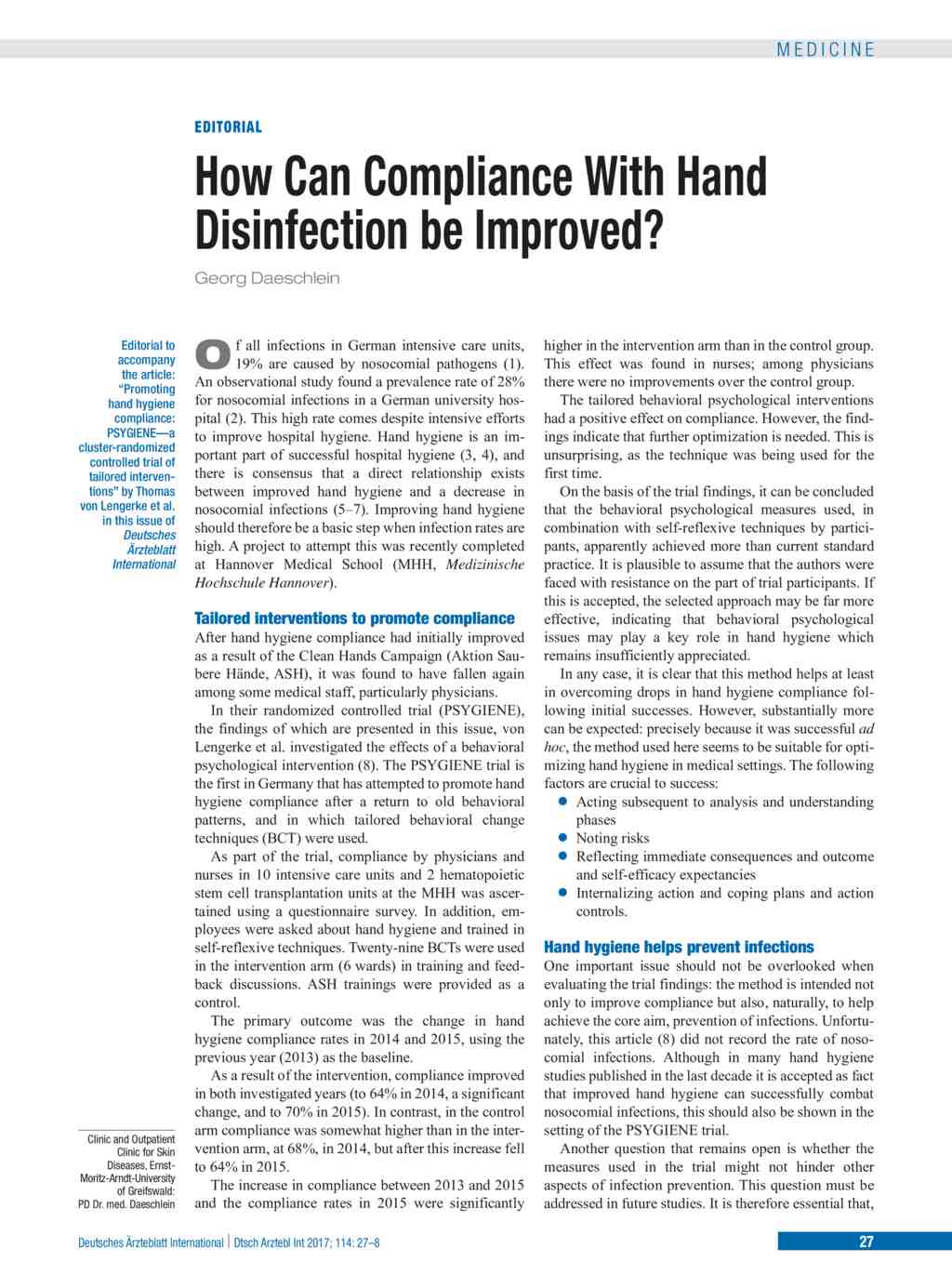