A Systematic Review and Meta-analysis

Background: Hepatocellular carcinoma (HCC) has an incidence of 5–10 per 100 000 persons per year in the Western world. In 20% of cases, surgical liver resection (LR) or liver transplantation (LT) can be performed. LT results in longer survival, as it involves resection not only of the tumor, but of precancerous tissue as well. The optimal allocation of donor organs depends on the identification of patients for whom LR is adequate treatment. In this meta-analysis, we compare LT and LR for patients with early HCC and well-compensated cirrhosis.

Methods: A systematic review of the pertinent literature was followed by a subgroup analysis of the studies in which patients with early HCC and well-compensated cirrhosis were followed up after either LR or LT. Overall survival at 1, 3, and 5 years, as well as morbidity and mortality, were compared in a random effects meta-analysis.

Results: 54 studies with a total of 13 794 patients were included. Among patients with early HCC, the overall survival after LT became higher than the overall survival after LR 5 years after surgery (66.67% versus 60.35%, odds ratio 0.60 [0.45; 0.78], p <0.001); there was no significant difference 1 year or 3 years after surgery. Nor was there any significant difference in morbidity or mortality between the two types of treatment in this subgroup. These findings contrast with the results obtained in all of the studies, which documented significantly better survival 3 years after LT.

Conclusion: Three years after surgery, the survival rates and complication rates of patients with early HCC treated with either LR or LT are comparable. Resection should therefore be the preferred form of treatment if the prerequisites for it are met. In case of recurrent tumor, these patients can still be evaluated for liver transplantation. This strategy could improve the allocation of donor organs.

The clinical perspective
Enlarge All figures

Every year more than 700 000 people worldwide develop hepatocellular carcinoma (HCC), and its incidence is rising (1, 2). In the Western world, most cases are caused by the increasing prevalence of cirrhosis resulting from nonalcoholic steatohepatitis (3, e1, e2).

Treatment options have been successfully developed for all stages of HCC: in addition to systemic therapy with, for example, sorafenib, local ablative procedures such as radiofrequency ablation (RFA), transarterial chemoembolization (TACE), and selective internal radiation therapy (SIRT) can slow or halt tumor growth (4, 5). Small tumors (those measuring less than 2 cm in diameter) can be curatively ablated using RFA (Box) (4, 6, e3). For larger and oligonodular HCC, liver resection and liver transplant are the only curative options (7).

Liver resection can be performed curatively in patients without liver cirrhosis or with remaining liver function. In selected patient groups, resection seems to achieve similar long-term outcomes to transplant (9).

For the 20 to 30% of patients who undergo surgical treatment, there are two treatment options: liver resection and liver transplant. Treatment allocation has not yet been fully clarified (10, e4–e6). There is a need for innovative, effective treatment allocation strategies, particularly in view of the shortage of donor livers (8, 10).

This meta-analysis is registered in the international register of systematic reviews (PROSPERO) (registration number: CRD42016002068) and was performed according to the PRISMA Statement.

Medline, PubMed, and EMBASE (OvidSP) were searched for relevant publications using the search term “hepatocellular carcinoma resection transplantation.“ Next, filtering was performed using the following terms: “clinical study,“ “clinical trial,“ “comparative study,“ “dataset,“ “journal article,“ “meta-analysis,“ “multicenter study,“ “observational study,“ “review,“ and “systematic reviews.“ The search was limited to the period from 1990 to December 2016 (Figure 1). The publications identified in this manner were screened and transferred to the program RevMan for further analysis (RevMan, version 5.3.5; Copenhagen, the Nordic Cochrane Centre, the Cochrane Collection, 2008). The remaining articles were checked against the exclusion criteria; animal studies, in vitro studies, articles not published in English, case reports, and studies with less than 1 year‘s follow-up or with less than 10 patients per group were excluded.

Overall survival was defined as the number of patients still alive at the various follow-up times.

The following inclusion criteria were set for subgroup analysis of early HCC patients:

Early postoperative mortality was defined as in-hospital mortality. Total complications were analyzed, as most studies did not distinguish between mild and serious complications, e.g. using the Clavien-Dindo classification. For both morbidity and mortality, differences were calculated using a random-effects meta-analysis.

The RevMan risk-of-bias tool was used to perform a risk-of-bias analysis. All studies entailed a high risk of selection bias, as they were all retrospective. Patient blinding could not be evaluated (performance bias, detection bias), as this is not possible with retrospective studies.

The primary outcome was overall survival following resection or transplant, in all articles and studies that investigated early HCC. As a secondary outcome, complications and early mortality were compared. Random-effects meta-analyses were performed for all comparisons. All treatment effects were reported as odds ratios and 95% confidence intervals. The chi-square test was used to determine differences in staging, age, and risk factors. The U-test was used for continuous variables that could not be assumed to be normally distributed. A statistical significance level of p <0.05 was used. Heterogeneity was evaluated using I2 (11).

The search of the literature in Medline, PubMed, and EMBASE revealed n = 4912 studies. After filtering, n = 2306 studies remained. In addition to titles and abstracts, the bibliographies of these articles were searched for further suitable studies. This led to evaluation of 65 publications, of which 54 studies with a total of 13 794 patients were ultimately included in analysis (Figure 1) (10, 12, 13, e4–e54). In total, the studies included 7990 patients who underwent liver resection and 5804 who underwent liver transplant. Baseline data is displayed in Table 1.

As all the studies were retrospective, it had to be assumed that there was a high risk of selection bias and incomplete reporting. In many articles no dropout rates were reported, and funnel plots also showed a publication bias resulting from the study hypothesis, together with selective reporting in general (data not shown). Some individual studies also showed the following biases: liver transplants from live donors, methods not stated, neoadjuvant therapy, change of indications and contraindications, surgery before 1990, liver transplant for recurrence following liver resection, varying follow-up periods for comparator groups, and one study of incidentalomas (e6, e7, e9–e12, e15, e18, e19, e22, e24, e25, e27–e29, e31, e33, e34, e36 e38, e40–e44).

There was only one subgroup of studies for which there was less difference between study groups after analysis in line with the above-mentioned inclusion criteria. Although there were no differences in age or sex distribution, there was a significant difference in severity of cirrhosis, despite exclusion of CTP class C patients (p <0.001) (Table 2). Heterogeneity analyses also showed more similarity between studies. At 1 and 5 years‘ follow-up, the studies were homogeneous (I2 = 0%, p = 0.79 and I2 = 0%, p = 0.53 respectively). In contrast, at 3 years heterogeneity remained moderate (I2 = 52%, p = 0.04) (11).

This meta-analysis provides an update of the relevant literature on curative liver resection and transplant in HCC (8, 14). Subgroup analysis was also performed in order to reflect a realistic clinical situation for comparable early HCC. At long-term follow-up in particular, liver transplant remains the gold standard for the treatment of HCC (8, 14, 15). However, the shortage of donors means that the availability of liver transplant is limited, and it can only be offered on a subsidiary basis. As an alternative, liver resection for early HCC can achieve similarly good outcomes at 1 and 3 years, with the same morbidity and mortality rates. In addition, published data show that study participants who were also stratified on the basis of tumor and liver biology (severity of cirrhosis) can achieve almost the same 5-year survival rates after liver resection as after liver transplant (16, 17, e47). These patients can be treated immediately. In addition, approximately 5 to 25% of those added to an organ transplant waiting list for HCC were removed from the list within a year (18). In these patients, although they were originally suitable to be organ recipients, HCC progressed swiftly despite bridging therapy. Surgery is often no longer possible in such cases. As a logical consequence, this may result in these patients undergoing transplant as quickly as possible. However, the survival rates of patients who received liver transplant particularly quickly were worse than those of patients who survived for 6 to 12 months of bridging therapy. Multivariate analysis showed no adverse effect for a longer waiting time (18). Some publications even found that waiting time could be used as an important selection criterion (known as the “test of time“) (19–21). Together with other indicators of tumor biology, such dynamic selection criteria may supersede the current criteria, which are based solely on tumor burden (21–23).

It is clear from the literature that liver resection and liver transplant are not of equal value. Patients with impaired liver function can undergo a transplant, as liver function is reconstituted. Although it has a higher complication rate than resection, transplant gives patients a better chance of 5-year survival (4). In contrast, liver resection should be performed only in patients with sufficient liver function. These patients can receive curative treatment with no significant waiting time and do not require immunosuppressants after surgery.

One possible strategy is to perform liver resection in all patients with sufficient liver function. However, other criteria should be developed so that resection can be performed safely and recurrences can be predicted (4, 9, 17, 20). This is the only way in which satisfactory oncological outcomes can be achieved in these patients. Ideally, such criteria should be easily accessible, standardized, noninvasive, and available preoperatively. This would mean that patients with a high risk of recurrence could be added to the liver transplant waiting list immediately. In these cases, resection would be at least an effective strategy for bridging to transplant, because, as our findings clearly show, these patients have excellent short-term outcomes (1-year follow-up), at any rate comparable to those for liver transplant. In addition, 50% of all patients who suffer recurrences following liver resection remain suitable for liver transplant (24, 25). This strategy can improve both overall and recurrence-free survival. However, primary liver transplant remains superior to such salvage transplantation (8). In addition, risk accumulation must be considered when sequential liver resection and liver transplant are performed.

Complex treatment algorithms such as these require an interdisciplinary approach. In order for multimodal treatments such as RFA, TACE, SIRT, selective body radiation therapy (SBRT), chemotherapy, and immunomodulation to be possible, patients must be closely monitored and re-evaluated (4, 5, 26, e4). A comprehensive cancer center brings together all relevant specialties so that complex cases can be discussed in specialized tumor boards and treatment options can be allocated (27–29).

The data presented here is based on a systematic review and meta-analysis of the published literature. In this context, there are structural problems regarding the included publications, as all the analyzed studies were retrospective. Prospective comparative studies are currently prohibited, probably for both ethical reasons (unequal study groups and significantly differing survival data) and logistical ones (number of suitable patients). Retrospective analyses of all patients lead to a high level of heterogeneity. Our funnel plot analysis also indicates publication bias. Although subgroup analysis did not eliminate the publication bias revealed in the funnel plots, it did achieve lower heterogeneity. Patient cohorts were also comparable in terms of age and sex distribution after subgroups were formed. Differences in CTP score remained.

This meta-analysis shows that liver resection can be performed with excellent 1- and 3-year survival rates and low complication rates for patients with early HCC. In practical terms, patients for whom liver resection is an option should undergo the procedure and then be evaluated for transplant in the event of a recurrence. However, in order for all patients to receive the appropriate treatment in line with their disease stage, each individual case must be discussed and re-evaluated on a multidisciplinary basis. This could eventually make it possible for donor livers to be used for the greatest possible benefit to all patients. 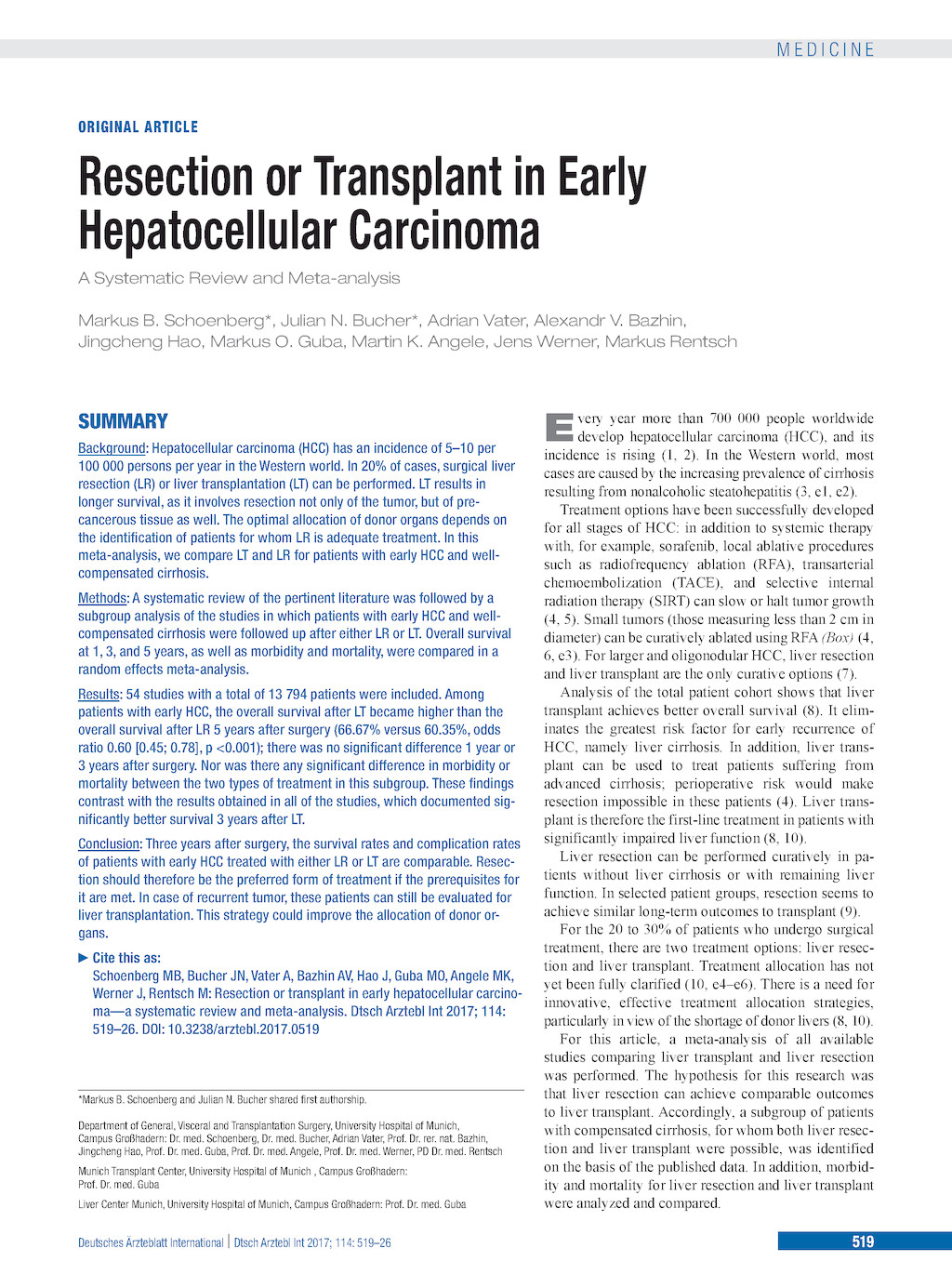