The Prevalence of Mental Illness in Homeless People in Germany

A systematic review and meta-analysis

Methods: We carried out a systematic review and meta-analysis on the prevalence of mental illness among homeless people in Germany.

Conclusion: In Germany, the rate of mental illness requiring treatment is higher among the homeless than in the general population. The development and implementation of suitable care models for this marginalized and vulnerable group is essential if their elevated morbidity and mortality are to be reduced.

The correlation between mental illness and homelessness has been the subject of both sociopolitical discussion and psychiatric research since the early 20th century (1). International studies conducted in the last 20 years have found lifetime prevalence rates for mental illness of between 60% and 93.3% among the homeless (2–6). For instance, one-month prevalence rates of between 8.1% and 58.5% have been found for alcohol dependency and between 2.8% and 42.3% for psychotic illnesses (7). These are associated with increased mortality due to, for example, suicide (8, 9) and substance abuse (10), an increased risk of serious somatic illness, particularly infectious diseases (11, 12), and increased rates of criminality (13–15) and violence (16).

The extent to which figures from a meta-analysis on the prevalence of mental illness among homeless people in Western countries are comparable to the situation in Germany is limited. The meta-analysis found that the most common disorders were alcohol dependency at 8.1 to 58.5%, drug dependency at 4.5 to 54.2%, and psychotic illnesses at 2.8 to 42.3% (7). These figures must be interpreted in the context of factors relating to the cultures, societies, and medical care in the countries in which the research was conducted, as societal and social phenomena such as homelessness, poverty, and marginalization are dependent on countries‘ social orders.

Reliable figures on the distribution of mental disorders among homeless people may provide political players, public bodies, and psychiatric facilities a basis for improvement of the urgently needed support options for this vulnerable group. The risk of an undersupply of medical care for homeless people with mental illness is high: Europe-wide, fewer than one-third receive treatment (18).

This article aims to provide an overview of German studies that have already been conducted on the prevalence of mental illness among the homeless in Germany, by means of a systematic search of the literature and a meta-analysis.

A systematic search of the literature for studies on the prevalence of mental illness among the homeless in Germany was performed via digital search platforms, using the search terms „homeless“ (or „homeless persons“) and „German“ (or „Germany“ or „Hamburg,“ „Berlin, “ „Munich“) (Figure 1). Next, the bibliographies of major publications were searched and individual authors were contacted. The search of the literature was performed by a physician, aided by a librarian. Studies were evaluated by a physician.

There were various definitions of homelessness: from persons living directly on the streets only to other definitions that included those living in shelters for the homeless. Five studies used a time-based criterion, ranging from 30 days to 3 months.

Prevalence rates were calculated using a double arcsine transformation via MetaXL 5.3, which stabilizes variance (19). A random-effects model was used. The heterogeneity of the included studies was estimated using Cochran‘s Q and I2 and represented using 95% confidence intervals. Heterogeneity was further explored using subgroup analyses based on categorical variables (time data collected [beginning before or after 2000], study size [less or more than 100], sex [male or female], participation rate [less or more than 80%]). This procedure was based on the MOOSE (Meta-analysis of Observational Studies in Epidemiology) criteria (20).

This systematic review and meta-analysis of mental illness among the homeless in Germany included 11 studies, covering 1220 individuals. We found a prevalence of alcohol dependency 1.5 times higher than in other Western countries (including the USA, the United Kingdom, and Australia) (55.4% [49.2; 61.5] versus 37.9% [27.8; 48.0]) (7). Prevalence rates of psychotic illnesses and drug dependency were lower than in other Western countries (Table 2).

There are 3 possible models that might explain the substantially higher rates of alcohol dependency:

Subgroup analysis revealed interesting findings for individual subgroups of homeless individuals. One important factor is sex. Only 131 (10.7%) of the total of 1220 homeless people were female. Our subgroup analyses found particularly high prevalence rates in studies involving only female homeless people for all Axis I disorders (83.3% [56.9; 100.0] versus 76.6% [68.7; 83.7]), psychotic illnesses (23.1% [5.0; 47.7] versus 7.6% [5.8; 9.7]), and drug dependency (24.6% [17.4; 32.6] versus 10.1% [4.8; 16.9]). This means that females are a particularly at-risk group. Although there was only one study in female homeless people that examined affective disorders, this also showed a higher prevalence rate, 46.9%, than in male homeless people only (14.6% [9.4; 20.6]). There were lower prevalence rates among homeless women compared to men for substance-related disorders and alcohol dependency. Homeless women are a subgroup that may be confronted with particular difficulties: estimated numbers of unreported homeless women are particularly high, as women are less likely to live directly on the streets and more likely to live in the homes of acquaintances, so their homelessness is more likely to go undetected, and they often do not use the available support system (e12, e13). As a result, homeless women are more frequently confronted with difficulties such as dependency on others and lack of safeguards (e12, e13). Because study sampling focused mainly on homeless people on the streets or in homeless shelters, homeless women have not yet been sufficiently researched.

This research raises several questions which might be addressed in future studies on homelessness in Germany:

One limitation of our analysis is the fact that multiple studies were conducted in Munich. It is therefore possible that individual participants may have been included in studies more than once. (Study intervals were between 4 and 14 years.) In addition, all the studies were conducted in towns and cities, where the risk of mental illness is generally higher than in rural areas (e18).

Social marginalization and homelessness are a highly charged, growing problem among those with mental issues. There is an urgent need for social, political, and psychiatric bodies to develop care models for this at-risk group. International studies have found assertive community treatment (ACT) programs that provide an intensive level of care directly on the streets or in homeless shelters, and intensive case management (ICM) programs, particularly beneficial in caring for homeless people with mental illness (e5, e19). Critical factors in care are strategies involving reach-out programs and a continuous active contact, as tailored and low-threshold support are especially important for this particularly at-risk group. An example of the use of such low-threshold support that involves visiting individuals is the „Mainz Model,“ which operates according to the principle, „if the patient doesn‘t come to the doctor, the doctor must go to the patient“ (e20). This approach can also be used to prevent homelessness: models in Mannheim and Freiburg have shown that early referral of individuals at risk of becoming homeless for specialized psychiatric treatment led to improved quality of life and social support (e21). The mortality and need for urgent care of homeless people is increased not only by mental illness, examined here, but also by somatic illness. Both comprise an important subject for research and care (11). Access to treatment is a particularly severe problem.

A recently published EU study of access to the support system for socially marginalized groups identified the following factors as particularly requiring improvements in care:

In this context, it seems particularly important to evaluate international experiences as bases for further work and to discuss care models and the extent to which they can be transferred to other settings.

Acknowledgement
We would like to express particular gratitude to Prof. Seena Fazel, University of Oxford, UK, for his support in performing the meta-analysis.

We would like to thank Gabriele Menzel of the Charité Library for her help in performing the systematic search of the literature. 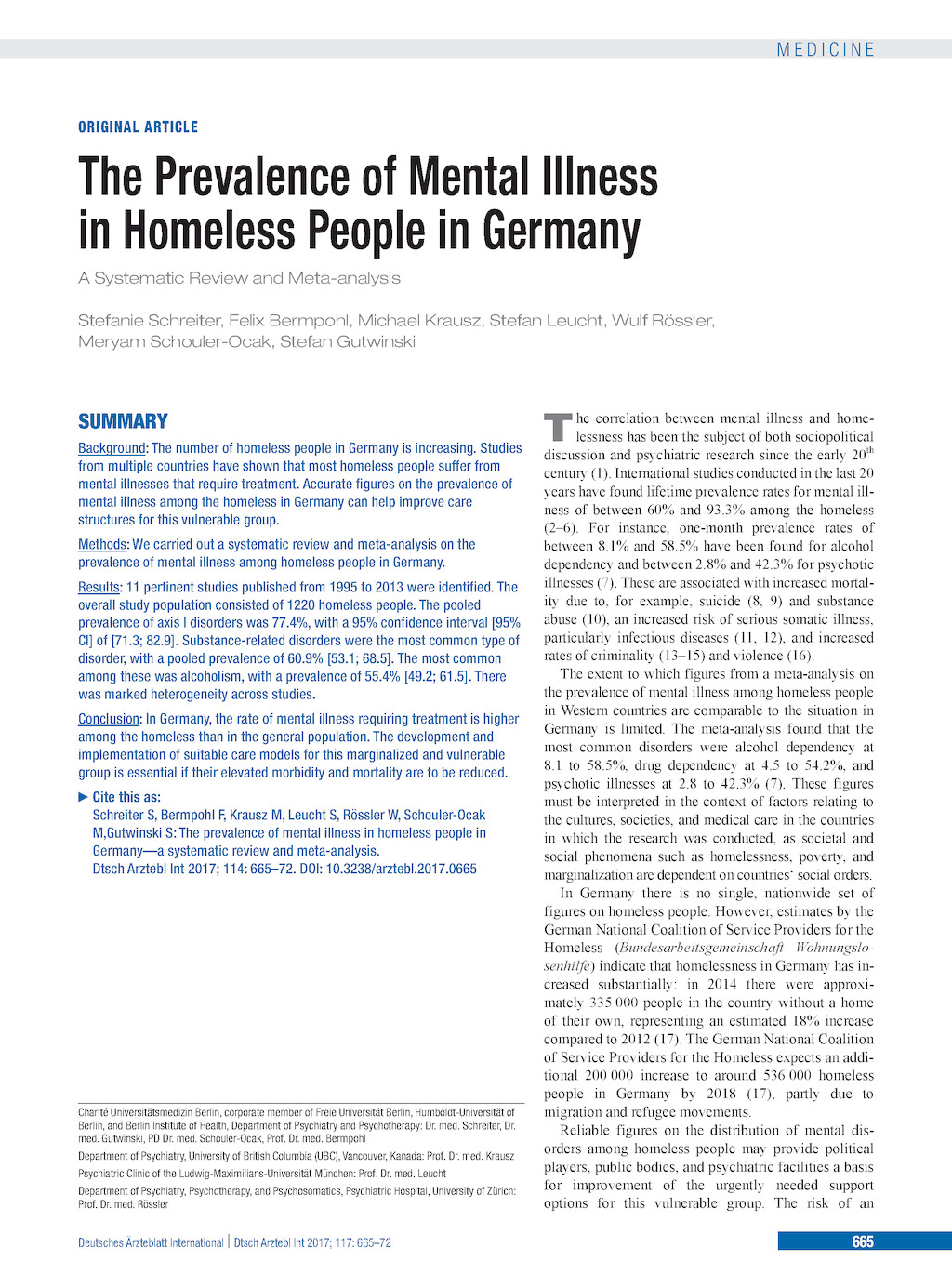