These two words sum up my 35 years of activity for Deutsches Ärzteblatt: three and a half decades in which scientific journalism went through major changes, yet in many ways maintained continuity with the past.

For this journal, continuity has meant sustaining the interest of its readers, as well as preserving the stable scientific and economic basis that any journal needs in order to be innovative. Over the years in which I was involved with Deutsches Ärzteblatt, I was able to devote my efforts to the achievement of these goals.

In 1982, I succeeded Hubert Harbauer (1919–1980) as scientific advisor—“specialty editor” (Fachredakteur) in traditional Deutsches Ärzteblatt terminology—for child and adolescent psychiatry on the scientific editorial board of the journal. I assumed this position after a lengthy interview with Rudolf Gross (1917–2008), an internist who was then the chief scientific editor. Our interaction had something of the nature of the final oral examination that German medical students take before licensure.

Then as now, an annual editorial conference was held in Cologne every November, at which the representatives of each specialty suggested and discussed topics for the articles of the coming year. The discussions back then were much more boisterous than they are now, sometimes even bellicose. This was owing not just to the matters at hand, but also to a number of strong personalities, none of whom showed a willingness to let someone else have the last word. For many years now, however, our discussion culture has been evolving in the right direction, toward sticking to the subject and treating colleagues with friendliness and respect.

The deputy scientific editors under Rudolf Gross were, first, the surgeon Edgar Ungeheuer (1920–1992) and then the internist Gotthard Schettler (1917–1996). In the beginning of 1989, Elmar Doppelfeld, a specialist in nuclear medicine and medical ethics, took over the position of chief scientific editor, and I was named his deputy. In 2004, the psychiatrist Christopher Baethge became chief scientific editor. I was fortunate to enjoy a friendly relationship and a collegial, innovative collaboration with both.

A survey of the years 1982–2017 reveals that the medical-scientific part of Deutsches Ärzteblatt, together with its English-language online version, Deutsches Ärzteblatt International, has turned into a respected journal that can take its place proudly among its counterparts around the world. This positive development resulted from a number of important measures taken over this period:

A wide range of topics

In selecting content for Deutsches Ärzteblatt, the scientific editorial office has consistently tried to take account of developments in the entire field of medicine, as is revealed in the thematic variety of the articles that appear in it. The journal seeks to document innovations in both diagnostic and therapeutic methods in all medical specialties. Interdisciplinary collaboration has increased over the past few decades; this is manifested in the trend toward publications by authorial teams rather than by single authors. The psychological and social dimensions of illness are dealt with in many articles as well.

An increasing threat to medicine as a whole, and to practicing physicians in particular, now comes from the boundless economization and bureaucratization of the entire health-care sector. A basic change in thinking is needed in this area, and Deutsches Ärzteblatt is a suitable organ for the launching of physicians’ initiatives to revitalize health care.

In the 35 years at Deutsches Ärzteblatt that I can now look back on, there were, of course, controversies as well. All of them were resolved constructively in collaboration with the journal’s publishers, chief editors, and business managers. Further desirable improvements would include, in my view, the following:

For me personally, discussions in editorial conferences, and, in fact, the totality of my work for Deutsches Ärzteblatt have been a highly enriching experience. I have had a unique opportunity to stay in touch with all of medicine and to have the assistance of highly competent colleagues in all specialized and academic matters. The same advantages are enjoyed by the readers, who are treated to a uniquely broad spectrum of topics among all German-language medical publications.

My work for Deutsches Ärzteblatt and my largely parallel service in the scientific advisory board of the German Medical Association (1984–2012, including 10 years as deputy chairman) enabled me to participate in both capacities in the development of position papers and guidelines that are of importance for all physicians.

I take my leave of the editorial board with a bit of wistfulness, with much gratitude, and with contentedness as I look back on the development of Deutsches Ärzteblatt, in which I was able to play a role for many years. Finally, I look forward to keeping up on further advances in medical science as a reader of this important journal. 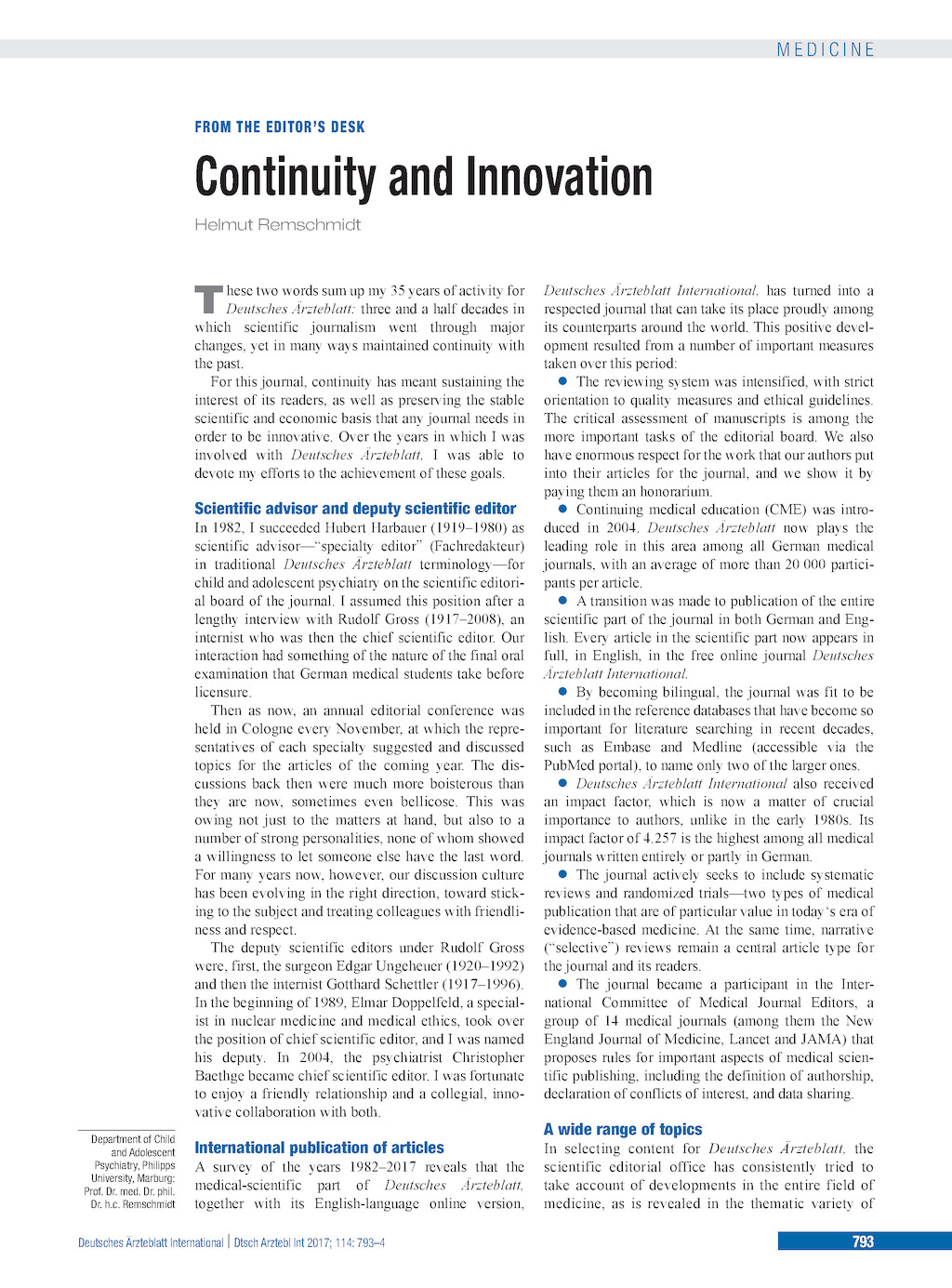