A systematic review and meta-analysis

Methods: Systematic literature searches for articles published between February 2006 and August 2016 were performed in CINAHL, EMBASE, PubMed, PsycINFO, and SocINDEX. We extracted unemployment rates in studies with and without population controls (controlled /uncontrolled studies). Unemployment in controlled studies was evaluated using a meta-analytic approach.

Conclusion: Childhood cancer survivors are at considerable risk of unemployment in adulthood. They may benefit from psycho-social care services along the cancer trajectory to support labor market integration.

Survival after childhood cancer has substantially improved in the last decades resulting in a growing population of survivors reaching adulthood (1). However, childhood cancer survivors are at high risk of adverse chronic health conditions (2–7). Approximately two thirds of long-term survivors reported at least one chronic health condition and nearly 30% were suffering from severe or life-threatening conditions (2). Although many survivors cope well with such conditions, a considerable number of survivors experienced impaired psycho-social functioning in adult life, particularly in terms of employment (8).

This review complies with the PRISMA statement regarding the reporting of systematic reviews and meta-analyses (13).

We used the following inclusion criteria to select eligible studies:

Review articles, editorials, commentaries, and conference abstracts were excluded. Two reviewers (LM, KR) independently assessed the eligibility of studies by first screening titles/abstracts and second, full-texts of the remaining studies. Discrepancies between the reviewers were resolved by discussion.

Data were extracted into a Microsoft Access database including the following:

The extracted data were independently double-checked by a second reviewer (KR).

Study quality was independently assessed by two reviewers (LM, KR) using five criteria displayed in eTable 1. These criteria were based on those in the previous review (9).

Analyses were performed using Stata version 14.1 (StataCorp LP, College Station, TX). We excluded students and homemakers whenever possible to include only participants eligible for employment. Employment was dichotomized into employed (full-time, part-time, sheltered employment, or parental/sick leave) and unemployed. Six studies did not report the number of controls with the respective employment status because national averages or the number of expected cases were reported (e1–e6). For these studies, we imputed the number of controls using a 1:1 ratio to the respective survivor population.

We performed a meta-analysis including all controlled studies. Employment outcomes were summarized using odds ratios (ORs) with the corresponding 95% confidence interval (95% CI). We used random effect meta-analysis to calculate pooled estimates because we expected substantial between-study variability for two reasons: we included observational studies that are prone to higher variability, and there are large differences across countries in labor markets, social welfare, and health care systems. In a random effect meta-analysis effect estimates of individual studies are assumed to vary around an overall average effect, whereas a fixed effect meta-analysis assumes the same effect across studies (14).

Statistical heterogeneity was identified using I2 statistics (15). Publication bias was examined using visual checking for asymmetry in funnel plots and Harbord’s modified test was used to detect small-study effects (16). We performed sensitivity analyses using other imputation ratios (1:5, 1:20, 1:50) for studies not reporting the number of controls. Furthermore, we compared unemployment rates weighted for sample size between uncontrolled and controlled studies to evaluate the representativeness of the controlled studies.

We then performed similar analyses stratified by:

Other predictors of unemployment were investigated using meta-regression to assess associations of the factors age at study, age at diagnosis, and time since diagnosis with the respective OR in controlled studies. Additionally, we narratively synthesized further predictors reported in all included studies.

We identified 1416 articles in the literature search including 102 eligible articles (Figure 1). For multiple articles based on the same study, we included only the most recent publication with the largest sample and/or most complete employment data. Therefore, we excluded 46 articles resulting in 56 studies finally included in the systematic review (e1–e56), of which 27 were controlled studies (eTable 2).

Twenty-four studies were performed in Europe, 23 studies in the US or Canada, and 9 studies in Asia (eTable 2). Eighteen studies provided stratified employment data for blood cancer, 15 for CNS tumor, and 7 for bone tumor/soft tissue sarcoma survivors. Across all included studies, average age at diagnosis ranged from 2–16 years, mean age at study ranged from 18–38 years, and the percentage of male survivors ranged from 19% to 69%.

The overall meta-analysis of controlled studies showed that survivors were 1.5 times more likely to be unemployed than controls (Figure 2; OR: 1.48, 95% confidence interval: [1.14; 1.93]). We observed large differences in unemployment rates among survivors between and within regions (eTable 2). Unemployment weighted for sample size was similar in controlled (17%) and uncontrolled (15%) studies. The funnel plot was symmetrical with no indication of small-study effects (p = 0.326). Findings remained stable in sensitivity analyses with different imputation ratios for studies not reporting the number of controls.

This study updated a previous systematic review on unemployment after childhood cancer (9) to address the growing body of literature on this topic showing inconsistent findings. We found that a considerable number of survivors experienced employment-related problems in adulthood. Approximately one in six survivors was unemployed. Compared to population controls, survivors were 1.5 times more likely to be unemployed. In Germany, a study based on the German Childhood Cancer Registry revealed an unemployment rate of 21% among survivors compared to 16% in controls (e13). However, we observed substantial differences across regions and diagnostic groups. In particular, survivors from the US and Canada and survivors of CNS tumors had increased odds of unemployment.

Our meta-analysis showed that survivors’ odds of unemployment was lower compared to a previous review of studies published between 1966 and 2006 (9). Although it is difficult to conclusively determine the reasons for these differences given the broader economic circumstances (e.g. recession in 2008), stratification by region revealed that this decrease was mainly driven by lower unemployment rates in survivors from the US and Canada in more recent studies. In 2006, de Boer and colleagues hypothesized that cancer-related work discrimination may be relatively high in the US with employers being more reluctant to hire cancer survivors due to fears of lower productivity (9); this may have changed in recent years.

Nevertheless, survivors’ odds of unemployment remained higher in the US and Canada compared to Europe. This is of particular concern as in contrast to most other developed countries, health insurance in the US is mainly provided and financially covered by employers (17). Employers in Europe may provide more flexible working conditions with better sick leave compensations (10) that help survivors to stay in the work force despite relatively frequent hospitalizations due to cancer-related late effects (18). Country-specific social welfare systems are important in supporting successful labor market integration. For example, recipients of unemployment benefits often have access to vocational counseling or re-training, and have to meet specific requirements including a minimum number of job applications per month. Typically, social welfare systems are well-established in Scandinavia (10, 12). Besides the many positive aspects of social welfare systems, they may provide wrong incentives by making unemployment financially attractive and thereby obscure negative implications of unemployment (12).

Similar to de Boer and colleagues (9), we found that unemployment is particularly prevalent among CNS tumor survivors. Previous reviews showed that neurocognitive impairments related to intelligence, memory, and executive functioning are common in CNS tumor survivors (19–21), encompassing essential attributes for staying in the workforce. Those survivors may benefit from specific on-the-job training or opportunities for sheltered employment. Several studies also identified female sex as a risk factor of unemployment. Studies in the US found that female survivors encountered higher health-related barriers for employment (22, 23). Another possible explanation might be that female survivors may experience higher work-related discrimination or may have other priorities in life, such as childcare.

A limitation of our review is the large heterogeneity in the overall meta-analysis (I2 = 95%). Stratification by region, diagnostic group, and study quality did not substantially decrease heterogeneity. The remaining heterogeneity may rather be caused by factors inherent in the respective labor market systems or due to different data collection periods. Employment-related problems may also vary between treatment centers according to the extent of psycho-social care provided (9). Our electronic search may have missed potentially relevant studies as we also included studies in which employment was not the primary outcome. This was addressed with an extensive hand search, resulting in the includion of studies from various countries covering a broad range of childhood cancer diagnoses. We found no indication of publication bias in terms of small-study effects. Study quality varied considerably. Our quality assessment emphasized the inclusion of a control population resulting in a high number of studies rated as low-quality. Unemployment was higher in uncontrolled than in controlled studies in the US and Canada and Asia, and across all diagnostic groups. Therefore, effects in the respective meta-analyses may be underestimated. However, among controlled studies, we found similar effect estimates for studies of high and low to moderate quality. Finally, the meta-analysis of Asian studies only included two studies and should therefore be interpreted with caution.

Establishing a satisfactory employment situation is challenging, particularly for those growing up with a chronic illness. Childhood onset of cancer, heart disease, diabetes, or epilepsy were all related to poorer vocational outcomes in adulthood (24). Moreover, among childhood cancer survivors, several studies revealed lower marriage rates (25–28) and educational achievement (29–34) compared to cancer-free individuals. Lower education is of concern regarding survivors’ vocational progress, as it may compromise the ability to engage in competitive working environments. Survivors encountering educational difficulties might benefit from special education services to minimize disparities compared to controls (35). The implementation of consistent monitoring of childhood cancer survivors’ vocational progress has been suggested as a standard of care in pediatric oncology (8). Currently, the availability of cancer-specific vocational rehabilitation services is limited. Moreover, existing services for the general population are often not systematically offered to survivors, even though previous studies have shown that more than half of survivors who received state assistance in job search, placement, and maintenance achieved successful employment (36, 37). In conclusion, childhood cancer survivors are at risk of unemployment and further effort is needed to systematically implement psycho-social care services along the cancer trajectory to support successful labor market integration.

We thank Simone Rosenkranz for her support in the development of our search strategy and particularly for her input related to the different electronic databases used for the literature search. This study was financially supported by the Swiss National Science Foundation (SNF Grant No. 100019_153268/1). 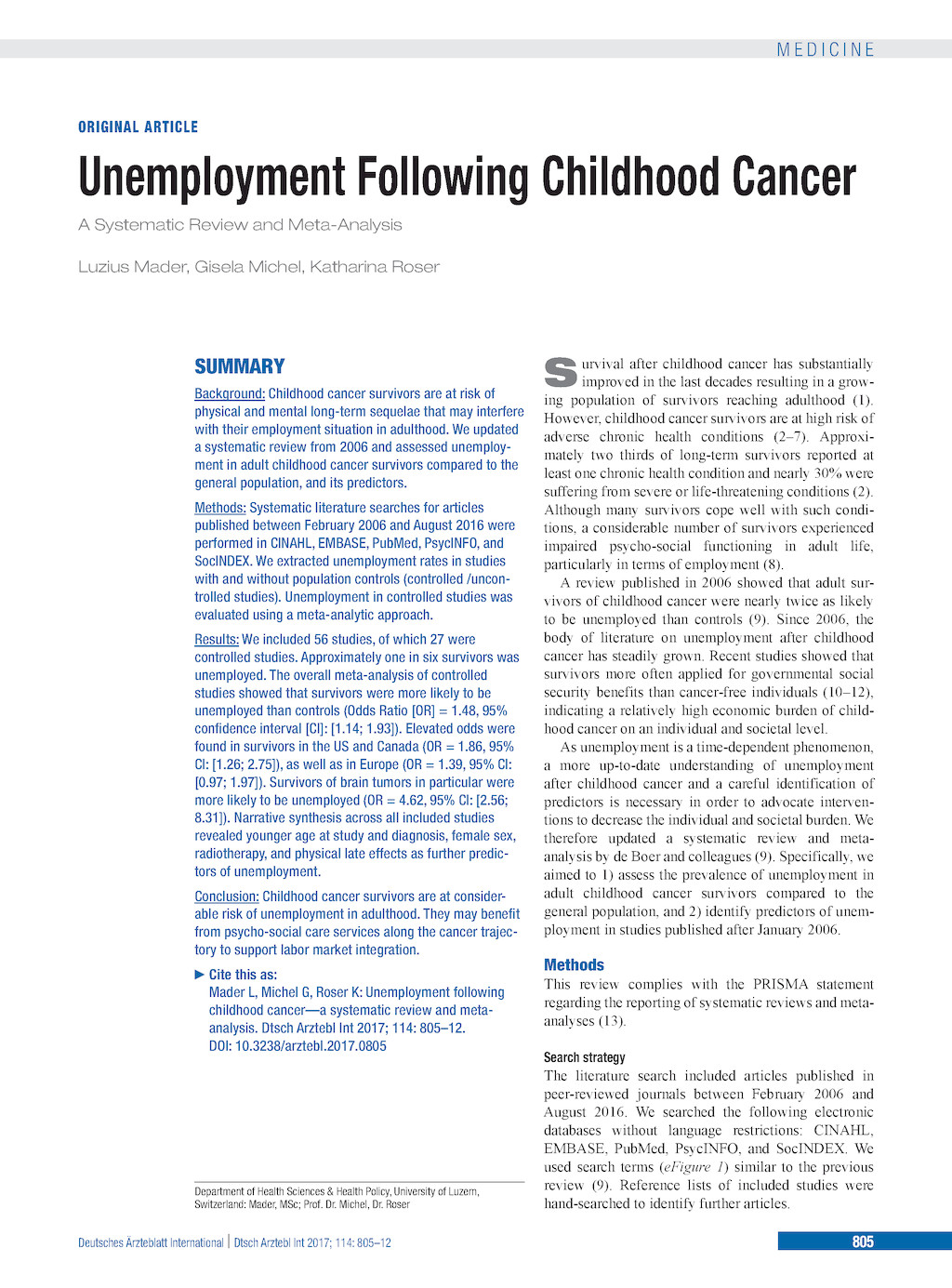