The Prevalence of Nosocomial Infection and Antibiotic Use in German Hospitals

Background: In 2011 and again in 2016, the European Centre for Disease Prevention and Control (ECDC) asked all European countries to carry out nationwide studies on the prevalence of nosocomial infection (NI) and antibiotic use (AU). Data on NI and AU constitute an essential basis for the development of measures to prevent infection and lessen antibiotic resistance.

Methods: The German prevalence study of 2016 was carried out according to the ECDC protocol. Alongside a sample of 49 acute-care hospitals requested by the ECDC that was representative in terms of size (number of beds), further hospitals were invited to participate as well. Analyses were made of the overall group (218 hospitals, 64 412 patients), the representative group (49 hospitals), and the core group (46 hospitals). The core group consisted of the hospitals that had participated in the study of 2011.

Conclusion: A decrease in NI and AU prevalence was seen in the representative group, while mixed results were seen in the other analyzed groups. Further efforts to reduce NI and ABA are clearly necessary.

In 2011 and 2012, the European Center for Disease Prevention and Control (ECDC) urged all European countries to conduct national point prevalence surveys (PPS) on the occurrence of nosocomial (healthcare-associated) infections (NI) and antibiotic use (AU) in hospitals, using set standard protocols (1). Altogether 29 countries of the European Union (EU) and the European Economic Area (EEA) as well as Croatia participated in this survey of 1149 acute-care hospitals. The prevalence of patients acquiring at least one NI was 6.0% (95% confidence interval (CI): [5.7; 6.3%]), the prevalence of patients receiving at least one antimicrobial agent was 35%. The prevalence of NIs that started during the current hospital stay was 4.5%; the remaining NIs were already present on admission to the hospital as the result of earlier treatment.

Based on these data, a method to convert prevalence data into incidence data and a systematic review on the burden of NIs, the ECDC estimated that annually more than 2.6 million new cases of NI occur in the EU and EEA. The cumulative burden of NI was estimated to be 501 disability-adjusted life years (DALY) per 100 000 population. This corresponds to 2 million years of life lost due to premature death and altogether 681 400 years during which the patients had to live with infection-related disabilities (2).

Five years later, the ECDC again called upon all European countries to conduct national prevalence surveys, using ECDC protocols and definitions. In Germany, the National Reference Center for the Surveillance of Nosocomial Infections which had been commissioned with the conduct of the previous study in 2011 was once again selected to conduct the national prevalence survey (3, 4).

In the period between the two national prevalence studies, NI and AU in German hospitals were topics that attracted considerable attention. In 2011, the German Infection Protection Act (IfSG) was amended; subsequently, all German Federal States revised their State Hygiene Regulations or adopted such regulations for the first time. Consequently, the results of the new national prevalence survey provide an opportunity to assess whether the high level of attention devoted to this issue has in the meantime helped to improve the situation.

The standard protocol issued by the ECDC was translated into German and used for the prevalence survey (5). In February 2015, the ECDC once again urged all countries to invite a representative sample of hospitals to participate in the survey. Taking into account the population size and hospital structure in Germany, 49 hospitals were to be selected. On the basis of the 2013 Directory of German Hospitals (DKV, Deutsches Krankenhausverzeichnis), a random sample of hospitals was selected taking into account the respective number of hospital beds (including two replacement hospitals); subsequently, the selected hospitals were invited to participate in the survey. In addition, all 1462 (as of 1st quarter 2016) hospitals participating in the Hospital Infection Surveillance System (KISS, Krankenhaus-Infektions-Surveillance-System) were invited to participate in the prevalence survey. If any of the hospitals selected for the representative sample (including replacement hospitals) was not interested in participating in the survey, a hospital from the group of hospitals not included in the representative sample with a matching number of hospital beds was invited instead.

The primary endpoints of the study were the overall prevalence of NI and the prevalence of AU. The secondary endpoint was the prevalence of NI which occurred in the respective hospital, i.e. which were not already present on admission to hospital as the result of previous medical treatments. For the survey, the ECDC’s definitions of NI were used, as described in the PPS protocol (6). Only infections which were active or treated with antimicrobial agents on the day of the survey were included. For antibiotic use documentation, the Anatomical Therapeutic Chemical (ATC) Classification System of the World Health Organization (WHO) was used (7).

In seven introductory courses held nationwide, staff members of the participating hospitals were familiarized with the survey protocol and the definitions used. The survey was conducted from May to June 2016. Trained hospital staff members successively visited the wards of their respective hospital to collect relevant data. Data were obtained from patient records and, if necessary, ward staff was interviewed to provide missing information. For any identified NI, data on the type and start of infection as well as infection-related microbiological data were collected. Furthermore, it was documented whether the patient had already contracted the nosocomial infection in another hospital prior to admission or acquired it during the current hospital stay. With regard to AU, the type of antimicrobial agent, route of administration and indication were documented and it was checked whether the indication was documented in the patient records. All tasks regarding data search and data collection from patients of a single ward had to be completed in one day.

Data were entered into a web-based software and validated. Analyses were performed in the National Reference Center. First, the 2011 and 2016 results for all participating hospitals were compared regarding the prevalence of all patients with NI and regarding the antibiotic use. In addition, the representative samples in the various surveys were compared with each other. Moreover, the prevalence rates for a core group of hospitals that participated in both the 2011 and 2016 surveys were analyzed. For the comparison of the 2011 and 2016 prevalence rates, the chi-square test was used; other parameters were compared using the Mann-Whitney U test. Further information, such as prevalence rates of the various NIs, type of microbial agent, and class of antibiotics were only analyzed for the total group of participating hospitals. For the analyses, the statistical software R and the OpenEpi software were used.

Altogether 218 hospitals with 64 412 included patients participated in the 2016 survey. This corresponds to 11.4% of the 1911 hospitals listed in the Directory of German Hospitals (DKV) in 2013 (8). Of these hospitals, 49 were included in the representative sample reported to ECDC. Most participating hospitals (54%) are responsible for the provision of standard care, 29% provide tertiary care or specialist care and 36 hospitals (17%) offer maximum care, including 7 university hospitals.

Table 1 and eTable 1 summarize key hospital parameters and the results for the 3 selected endpoints for all participating hospitals, the representative sample and the core group. While the median number of hospital beds in the overall group of participating hospitals decreased (305 in 2016 versus 359 beds in 2011), the median hospital bed number in 2016 in the representative sample was 205 and in the core group 392 beds. The median length of hospital stay decreased in the overall group between 2011 and 2016 from 6.6 to 6.3 inpatient days. Furthermore, employment of infection prevention and control nurses, and infection prevention and control doctors increased significantly in all 3 analyzed groups. The consumption of hand rub per patient day as a surrogate parameter of hand hygiene increased in the overall group (from median 24.5 mL to median 32.5 mL per patient day).

In 58.5% of NIs, microbiological identification of the pathogen was available at the time of the prevalence survey. In 2011, it were 55.0%. If on the day of the survey, samples had already been obtained for microbiological testing, but the results were not yet available, these results were not added later in order to limit the survey-related workload. Consequently, the overview of microbiological findings presented here is incomplete. Altogether, 2294 NI-causing pathogens were documented. The most common pathogens were Escherichia coli (16.6%), followed by Clostridium difficile (13.6%), Staphylococcus aureus (12.0%), Enterococcus faecalis (6.9%), and Pseudomonas aeruginosa (5.8%). Compared to 2011, Clostridium difficile toppled Staphylococcus aureus from second place in the list of the most common NI pathogens.

Altogether 22 086 antibiotic treatments were documented in 16 688 patients. Among the indications for antibiotic use, the share of infections increased while the share of prophylactic use decreased (Table 3). In line with the results of the 2011 survey, a high proportion of perioperative prophylaxis beyond the day of surgery was noted. With 31.3%, the proportion of patient records where the indication for antibiotic use was not documented was comparatively high. However, in most cases it was possible to find out about the indication from other sources, e.g. by making enquiries.

In addition to the hospitals included in the representative sample, once again a large number of hospitals agreed to voluntarily participate in the national prevalence study. Even though the survey created a comparatively high workload for the infection prevention and control professionals of the hospitals, the staff members considered it important to participate. Participating in the survey provides hospitals with an opportunity to enhance their internal quality management with additional indicators of how their own hospital is positioned in comparison to other hospitals, potentially stimulating further preventive actions or antibiotic stewardship (ABS) activities.

Increased public awareness of this topic and the amended legal framework in the German federal states have certainly helped to bring about change so that hospitals now give higher priority to the prevention of NIs (10). Many hospitals responded by employing additional infection prevention and control doctors, almost doubling their numbers compared to 2011. In the data of all participating hospitals, it is noteworthy that the consumption of hand rub increased. This change may also be related to other national hygiene activities, such as the Clean Hands initiative with more than 1800 participating healthcare facilities (11, 12).

However, when interpreting the decrease in NI rates various parameters have to be taken into account:

When evaluating the increase in CDI in 2016, it has to be taken into account that in recent years many hospitals introduced diagnostic tests with improved sensitivity (15, 16). Thus, it is uncertain whether the actual prevalence has really increased.

In comparison to the decrease in NIs, the prevalence of AU has not changed in the overall group during the last five years. It is notable that the use of penicillins with β-lactamase inhibitors has increased significantly and that all of the five most commonly used classes of antibiotics include only broad-spectrum antibiotics, except for second-generation cephalosporins which are primarily used for perioperative prophylaxis. Most likely, this development is driven by the increase in multi-resistant gram-negative pathogens (17). Overall, the distribution of AU is in line with a recently published study analyzing usage data in German hospitals (18). The finding that in 31.3% of patients the indication for antibiotic use is not documented is of concern. Regular documentation could lead to more conscious decisions against the use of antibiotics in questionable cases.

Results from other EU countries are expected to become available in 2018 or 2019. Then, the ECDC will undertake national comparisons based on the representative samples for which in Germany a reduction in NI results.

However, when all studied groups are included in the analysis this reduction is not clearly demonstrated. Overall, the results indicate that the increased efforts of the hospitals, for example with regards to the number of infection prevention and control professionals and hand hygiene, as well as structural changes, have resulted in a successful reduction of NI in recent years. However, antibiotic stewardship activities did not help to measurably improve the situation in various hospitals in Germany.

The remaining authors declare no conflict of interest exists. 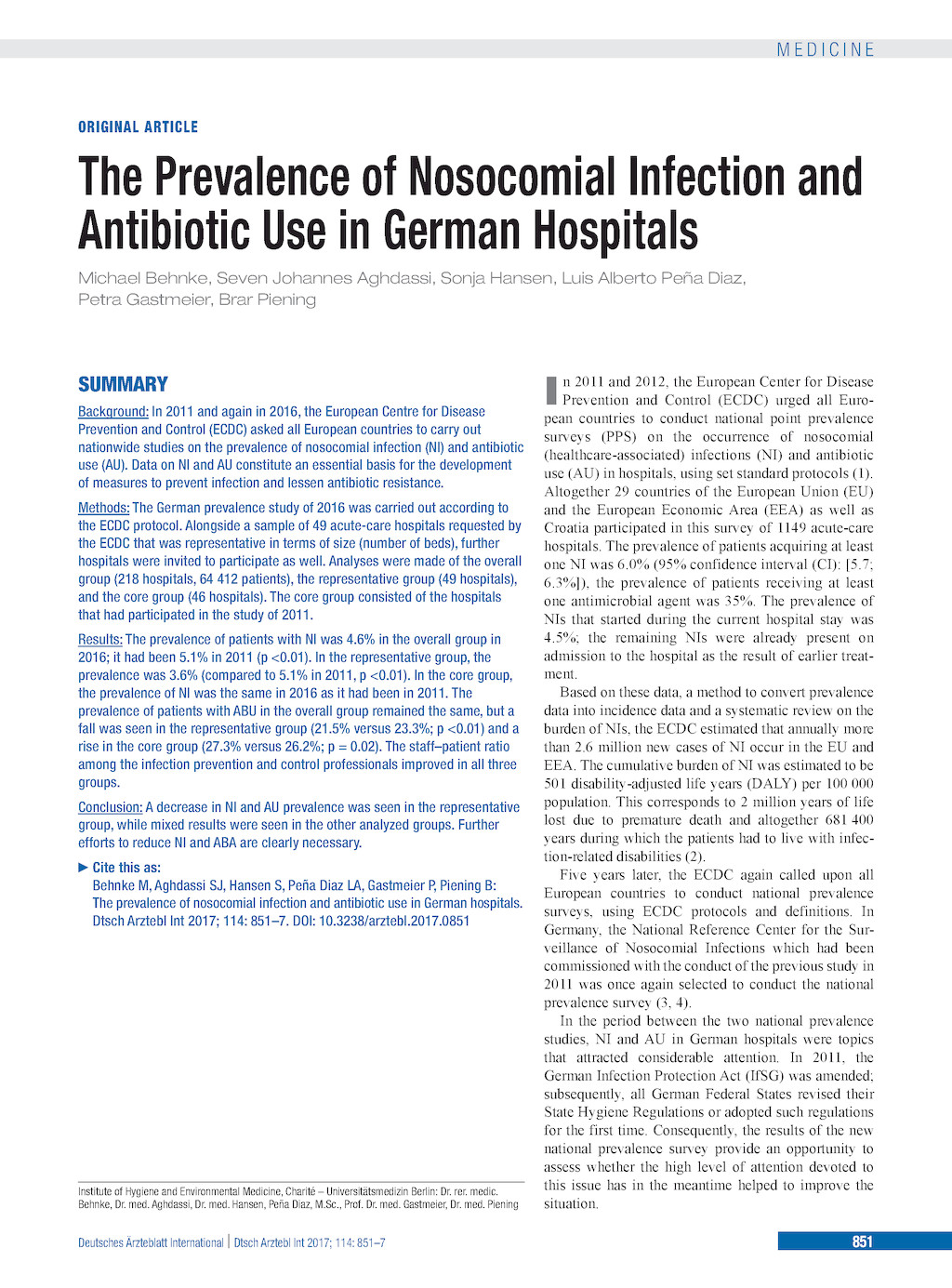