We thank our colleagues for their comments. Here are our responses to the issues raised.

Representativeness: Low participation rates in primary care studies are a fundamental problem, which brings with it uncertainty regarding selection bias (1). Beyond speculation, there is no option for establishing unequivocally whether non-participations really introduce substantial biases into the assertions. In view of the large heterogeneous sample of doctors, it seems unlikely that such biases need to be assumed. Greater participation in publicly funded studies of independent and interdisciplinary research groups is undoubtedly desirable but seems unrealistic in spite of enormous efforts.

Diagnostic screening: In view of the enormous amount of time it takes to establish a state-of-the-art a clinical diagnosis of depression confirmed by a differential diagnostic evaluation, we depend in primary care on screening methods with possibly poorer specificity. We used the Depression Screening Questionnaire (DSQ), a diagnostic screening instrument with satisfactory reliability as well as acceptable sensitivity and specificity in comparison to the gold standard that is the diagnostic interview (2). The symptoms of a depressive episode that we collected in this way correspond to the length of time that is required according to established criteria to make a diagnosis of a depressive episode (two weeks). The persistence is reflected too (“on most days”). It is therefore correct that a formal clinical diagnosis is not possible on the basis of the DSQ, but a depressive syndrome can be ascertained, and this can be differentiated from, for example, transient situational low mood.

Severity: The reported results are consistently differentiated by severity. Even the mean value that our correspondents mentioned incorporates—especially considering the quality of treatment—the results according to the degree of severity. Furthermore, reasons are given for why in this cross-sectional study, pharmacological treatment is categorized as evidence-based even in mild depression, in contrast to the guideline recommendation. On the one hand, patients who were previously affected by moderate to severe depression may currently be at least in partial remission, thanks to psychopharmaceutical treatment. On the other hand, what should not be dismissed out of hand is that the availability of outpatient psychotherapy may be limited or that a patient decides against this treatment option. This has been described and is a phenomenon that doctors encounter in real-life clinical practice.

Undertreatment: We related and discussed undertreatment only in the setting of specific subgroups (patients whose condition remained undetected) and specific treatment components (such as lacking indications of guideline-conform combination treatment in severe depression, psychotherapy in sustained mild depression). All in all, we agree with the interpretation that treatment rates in patients with depression diagnosed by doctors are positive. It is justifiable to point out that the treatment is complex: for example, according to the national disease management guideline for unipolar depression, the patient and his/her relatives should be included when planning the treatment, and principles of shared decision making should be considered (3).

The presentation of such complex matters reaches limitations in a single research article, and it was not possible to include all available data in detail. Further analyses are needed and possible in order to shed light on the multitude of reasons that serve as obstacles to the use of the recommended therapies according to the guideline (4). 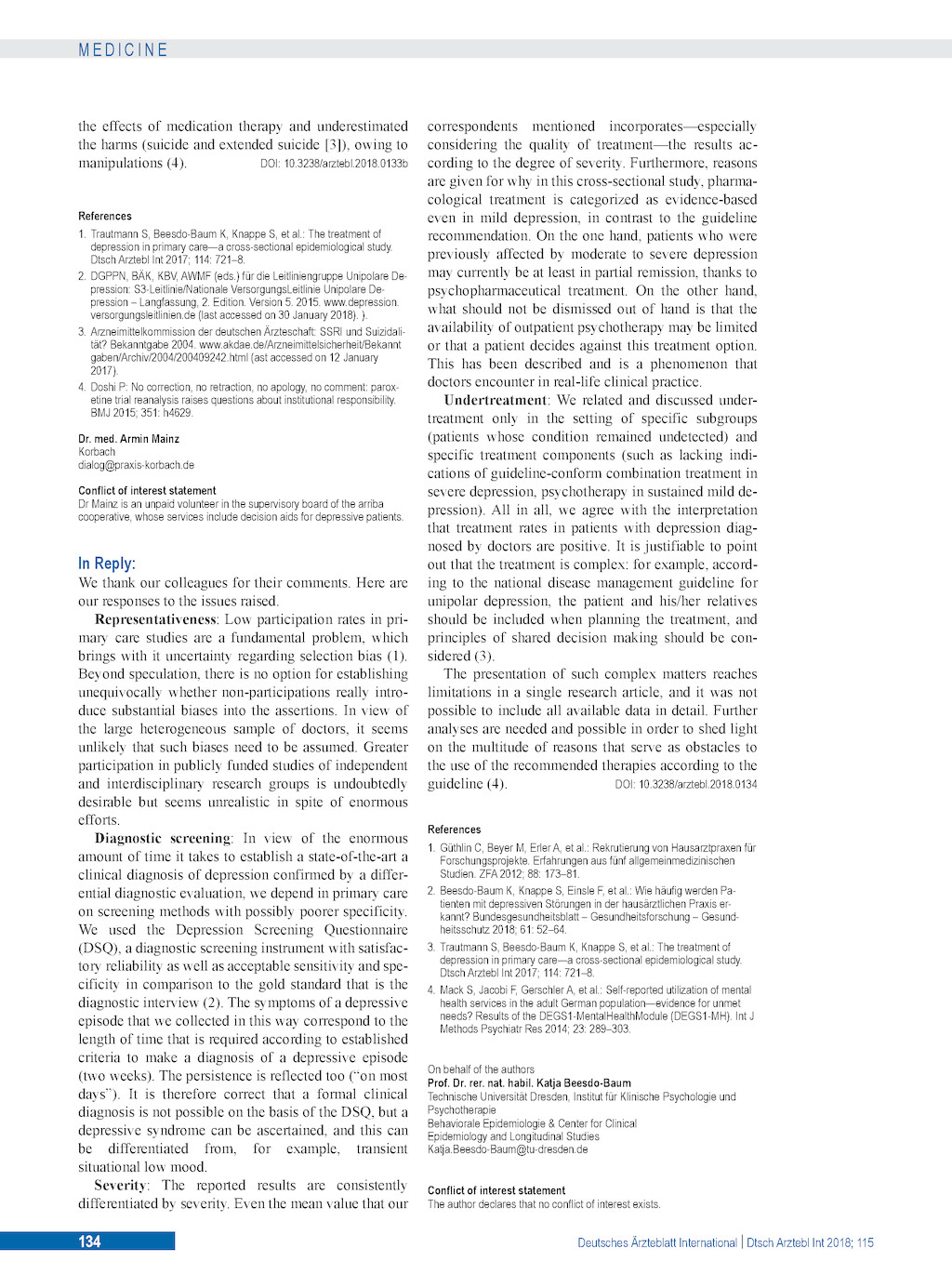