Methods: This review is based on pertinent publications retrieved by a selective search in PubMed with an emphasis on articles from the past decade. The current guidelines and recommendations of specialty societies were also considered in the evaluation.

Results: CUP most commonly manifests itself as metastases to the lymph nodes, lungs, liver, or bones. With the aid of imaging studies, including functional hybrid imaging and further medical examination, a primary tumor can be discovered in up to 40% of patients initially diagnosed with CUP. Immunohistochemistry guided by histomorphology often enables precise characterization of the lesion and can be supplemented, in selected cases, by molecular-genetic diagnostic evaluation. The most commonly detected types of primary tumor are cancers of the lung, pancreas, liver, and biliary system. For patients with local metastases, surgical resection or radiotherapy with curative intent is usually indicated, sometimes in the framework of a multimodal treatment concept. The median 2-year survival of patients with disseminated CUP is only 20%. For such patients, specific types of systemic therapy are recommended on the basis of the diagnostic characterization of the disease. Immune-modulatory antibodies can be effective, particularly in the treatment of CUP that has been characterized with biomarkers, but should still be considered experimental at present.

Conclusion: A combination of conventional and innovative diagnostic methods enables the provision of highly refined therapeutic strategies to patients with CUP who are undergoing treatment in interdisciplinary cancer centers.

With an incidence of 6–12 cases per 100 000 inhabitants per year, metastatic cancers of unknown primary origin („CUP“) account for approximately 2–4% of all new cancer cases in Germany (1, 2). The cumulative incidence of CUP is thereby almost equal to that of common malignant tumors, such as gastric and pancreatic carcinomas, and is even higher than the single incidences of malignant lymphomas or leukemia.

Despite this quantitative significance, medical progress on CUP syndrome has not experienced the same dynamics as seen for many cancers defined by homogeneous histological criteria. However, with the clinical introduction of high-resolution imaging as well as molecular pathological and molecular genetic diagnostic procedures, the apparent homogeneity of histomorphologically well-defined tumors is now under question. In light of this, a reassessment of the CUP syndrome is also indicated. The aim of this work is to provide a current review of clinically relevant diagnostic algorithms and criteria as well as the resulting therapeutic concepts.

Based on the clinical and scientific experience of the authors, a selective literature search was performed in PubMed that included reviews, controlled studies, registry studies, and prospective case series, using especially those published in the past ten years. In addition, current guidelines and recommendations of scientific societies were taken into account.

The most common manifestations of CUP syndromes are metastases in the lymph nodes, lung, liver, or bone (3). Disseminated metastases are seen in most cases (75–85%). Solitary metastases or metastasis limited to lymph nodes are only observed in 15–25% of cases (3).

Symptoms of CUP syndrome are determined in particular by the respective organ involvement (Table 1) and by the extent of metastasis. In addition, diagnosis can be made as a secondary or incidental finding of radiology imaging in largely asymptomatic patients.

For CUP, a comprehensive medical history, an in-depth physical examination, imaging and possibly endoscopic procedures, and the selection of the tumor manifestation suitable for biopsy and histopathological and molecular pathological characterization are critical. As CUP is ultimately an exclusion diagnosis, it is necessary to avoid both too many and too few diagnostics. Evidence-based guidelines from national and international specialist societies provide important support for this (2, 4, 5).

Frequently, the diagnostic algorithm is based on the clinical presentation of metastasis as well as on the histomorphological findings. For example, a patient with axillary lymph node filaments should undergo not only basic imaging diagnostics but also senological diagnostics, comprising ultrasound, mammography, and magnetic resonance imaging (MRI) of the breast (6).

Colonoscopy is recommended for liver metastases, and an ear, nose, and throat medical examination (if necessary, using endoscopy), for cervical lymph node metastases. For younger men, findings of mediastinal and retroperitoneal metastases along the midline or lung metastasis should always be followed by a urological examination of the testes as well as determination of the tumor cell markers typical of germ cell tumors, beta human chorionic gonadotropin (β-HCG), and alpha-1-fetoprotein (AFP). Prostate cancer should be considered if osseous metastases are determined in older men; a prostate-specific antigen (PSA) diagnosis is justified.

Further targeted examinations may be useful depending on the specific history and histology (3). If this procedure leads to no plausible detection of a primary tumor, further diagnosis should be made with the working hypothesis of the presence of CUP syndrome.

The basic diagnostic of CUP usually includes contrast-enhanced computed tomography (CT) of the thorax, abdomen, and pelvis and, depending on the clinical manifestation, other affected body regions (7). The introduction of positron emission tomography (PET) using the tracer 2-fluoro-2-deoxy-D-glucose (FDG) determines not only the metabolic activity of lesions but also detects and characterizes lesions that are difficult to define anatomically. Thanks to the availability of hybrid PET/CT devices, a contrast-enhanced CT scan of the entire body with PET can be performed in a single examination and evaluated together.

Meta-analyses show that combined FDG-PET/CT detects a primary tumor in approximately 40% of cases classified clinically as CUP (Figure 1), even when evidence for it is lacking based on previously used diagnostic methods (8, 9). However, the cited meta-analyses show high degrees of heterogeneity.

Figure 1
Detection of cervical lymph node filaments on the left side, and unobtrusive endoscopic and conventional morphological imaging in a 49-year-old female patient
Enlarge All figures

The introduction of hybrid PET and MRI devices may further improve the detection rate. Nonetheless, despite promising initial results, this modality is currently reserved for scientific applications (10).

Based on published studies, evidence-based recommendations for the use of FDG-PET/CT in the cervical region are now available. In March 2017, the German Federal Joint Committee (Gemeinsame Bundes­aus­schuss) determined that using FDG-PET/CT for head and neck tumors and „for CUP syndrome in the head-neck area“ is a reimbursable procedure (11). For CUP syndrome outside the head area, there are currently no evidence-based positive recommendations.

Histological and/or cytological examinations are key for further diagnostics and therapy. Additionally, interdisciplinary cooperation and an effective exchange of information about patient history and imaging procedures are also decisive.

For the mostly moderately to poorly differentiated metastases, immunohistology and/or cytology are very important. In particular, immunohistological examinations enable the presence of malignant lymphomas and neuroendocrine tumors to be detected or excluded. Important antibodies and their algorithmic uses are summarized in Figure 2. The p16 protein can be used as an immunohistochemical marker for squamous cell carcinoma to identify primary tumors in the head/neck region (12).

However, these studies need to be critically analyzed due to a very high clinical pretest probability, as the conventional histological or immunohistological analyses were very indicative in most of the published cases we examined. For instance, the immunohistochemical marker combination of cytokeratins (CK5/6, CK7, and GATA3) can predict the likelihood of having a urothelial carcinoma, which can then be confirmed by gene expression profiles. If so-called CUP chip tests (gene chip analysis) are carried out commercially, the examiner must first receive all clinical information.

If the diagnostic algorithm mentioned above does not allow a tumor to be definitively classified, the CUP diagnosis is maintained. In this case, the following recommendations for action apply: If only a solitary metastasis or the incidence of a single lymph node region is detected, a local radical surgical (18) or radiotherapy can be carried out with curative intent (19). However, more than 75% of cases involve multilocular metastases, which is associated with a less favorable prognosis (3).

In principle, radiotherapy for CUP should be considered for adjuvant, definitive, and palliative therapy intents. Together with surgical and medical approaches, radiotherapy can contribute to organ preservation or curative procedures (19). Radiotherapy can also be an option for palliative care, especially in the following situations:

● in metastases in technically inoperable areas, for instance when surgery threatens loss of organ function;

● to optimize analgesia, such as in osseous metastasis (19).

For both radiotherapy and surgical treatment options, patients should be divided into prognostic subgroups. Table 2 shows prognostically favorable subgroups for the potentially life-prolonging surgery in CUP manifestations. In addition to only resection, multimodal therapy based on the suspected primary tumor should also be considered in these cases (18, 20).

Internationally accepted standards of treatment for adenocarcinomas with no indication of enteral origin, and for undifferentiated carcinomas, are combination chemotherapy of a platinum substance (cisplatin, carboplatin) and a taxane, gemcitabine, or irinotecan, or (in the case of contraindication to platinum) platinum-free combination therapies or monotherapies (21). In the case of clinical presentation of adenocarcinoma compatible with a colon tumor, therapy should be analogous to that of metastatic colon carcinoma. Thus, a recommendation grade B is available for fluoropyrimidine-based combination therapy (for example, as part of the FOLFOX or FOLFIRI chemotherapy regimen) (2, 20, 22).

If the histopathological characterization points to a germ cell tumor, a platinum- and etoposide-based therapy with curative intent is indicated (23). Furthermore, neuroendocrine (2–4%) and squamous (5–8%) differentiated CUP syndromes can be distinguished as special histological categories (24, 25).

For differentiated squamous cell CUP syndrome, combination therapy with 5-fluorouracil and cisplatin is the standard, which can be supplemented with radiotherapy in the case of regional spread (24, 25).

To increase the probability of primary tumor detection, options are currently being researched that can optimize diagnostics via DNA methylation profiling or molecular tumor profiling (27). This can be followed by a tumor-specific therapy to improve prognosis of patients with clinically-defined CUP syndrome (16, 27). Also, the demonstration of potentially targeted, oncogenic driver mutations offers a possible treatment approach that is independent of the primary tumor (28, 29). However, these strategies are still in the scientific testing stage and are currently characterized by a very heterogeneous response across different histomorphologically defined entities. A German research group is evaluating whether the results of standard therapy with carboplatin/paclitaxel can be improved by supplementing the anti-EGFR antibody cetuximab in a multicenter, randomized phase III study (30). The final study results are pending.

The clinical introduction of monoclonal antibodies directed against immunoregulatory receptors or ligands, such as the so-called checkpoint inhibitors of PD-1, PD-L1 and CTLA-4, for broad-spectrum, drug-based therapy also holds the potential to improve treatment options for patients with CUP syndrome. For some histologically defined entities, immunohistochemical detection of PD-L1 expression on tumor cells or stromal cells may detect patient groups with higher probability to react to therapeutic antibodies directed against PD-1 or PD-L1 (31).

To date, no systematic studies on CUP syndrome have been carried out for this hypothesis. However, an isolated case has been reported in which a refractory, disseminated CUP syndrome with high PD-L1 expression was effectively treated with an immunocheckpoint inhibitor (32).

In this context, the current approval in the USA of the antibody pembrolizumab for the entity-independent treatment of tumor diseases with molecular pathology-assured microsatellite instability (MSI) should also be considered. In a multi-center study, 86 patients with various MSI-positive tumors, including CUP, were treated with the anti-PD-1 antibody. Promising initial results were reported: 53% patients showed objective tumor responses, with complete recovery in 21% of patients (33). Further studies are required for conformation before this therapy, which is solely biomarker-based, can be broadly applied.

Translated from the original German by Veronica A. Raker. 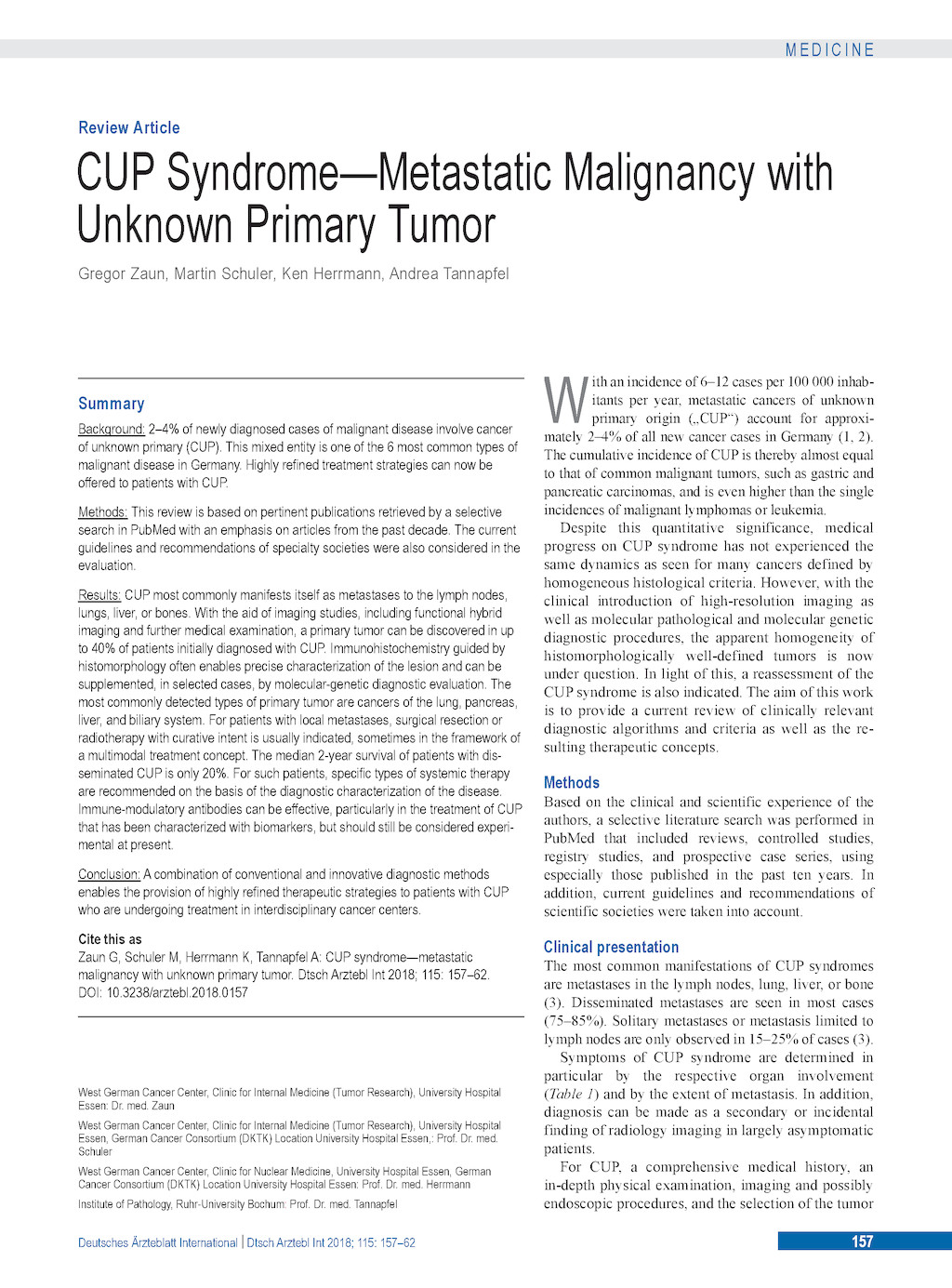