An Umbrella Review of the Effectiveness of Intraoral Appliances, Maxillary Expansion, and Maxillomandibular Advancement

Background: The effectiveness of intraoral appliances (IOA), maxillary expansion (ME), and maxillomandibular advancement (MMA) in the treatment of children and adults with obstructive sleep apnea (OSA) has not yet been adequately assessed.

Methods: An umbrella review was performed based on established guidelines for evidence-based medicine. Data synthesis was performed only from randomized controlled trials with Paule-Mandel random-effects meta-analyses / meta-regressions using mean differences (MDs) and 95% confidence intervals (CIs) and was followed by the qualitative evaluation of the meta-evidence.

Results: 29 systematic reviews were included, 7 of which provided quantitative data. IOA were effective in improving apnea hypopnea index (AHI) compared to both, placebo appliances (12 trials; 525 patients; MD = –11.70; 95% CI: [–15.38; –8.01]; p<0.001) and no treatment (1 trial; 24 patients; MD = –14.30; [–21.59; –7.01]; p<0.001). Only the former comparison was supported by robust meta-evidence. Effectiveness of IOA as measured by the Epworth Sleepiness Scale, on the other hand, was not supported by robust meta-evidence. No randomized or prospective controlled trials were found on the effectiveness of ME (conventional or surgically assisted) and MMA.

Conclusion: Intraoral appliances are effective in reducing AHI and their use is substantiated by robust evidence. There is no evidence from high-quality research to support treatment with ME (conventional or surgically assisted) or MMA in patients with OSA.

Obstructive sleep apnea (OSA) is a sleep-related disorder in which the repetitive narrowing or collapse of the upper airway leads to a partial decrease in airflow (hypopnea) or to complete airflow cessation (apnea) during sleep (1).

Risk factors for OSA development include:

An overview of the pathophysiology of OSA and associated risk factors is given in Figure 1 (adapted with permission from Jordan et al. [14]).

Since some well-established risk factors have a genetic background, OSA aggregates within families (15). However, susceptibility to OSA among family members is not fully explained by familial aggregation of other risk factors, such as obesity (16, 17).

The impact of OSA on patients is considerable. Lack of energy seems to be the most important complaint (18), although daytime sleepiness is also reported by 46–47% of OSA patients (18, 19).

Additionally, OSA sufferers have an elevated risk of motor vehicle crashes, although the actual number of accidents is still quite low (20). Furthermore, their cognitive performance is impaired in proportion to OSA severity (21, 22), while their perceived quality of life appears to resemble that of other chronic diseases (23).

Available symptomatic or causative treatments include (24, 25):

Here, we aimed to comparatively investigate the effectiveness of OSA treatment modalities for children and adults that are of interest to dentists/orthodontists by conducting an umbrella review of systematic reviews. Furthermore, we intended to systematically assess the available scientific evidence on these interventions and to identify potential biases that could affect the study findings.

The protocol for this study was made a priori and registered in PROSPERO (CRD42016045840). All post hoc changes are appropriately mentioned. The review was conducted according to the Cochrane Handbook (31) and reported according to the PRISMA statement (32). We also considered the guidelines provided by Aromataris et al. (33).

Two authors (VK and SNP) independently extracted descriptive data from each eligible systematic review. For further data extraction of quantitative results from primary studies, we considered only such systematic reviews in which meta-analyses with comparison groups were performed. If an article presented separate meta-analyses on more than one eligible outcome, those outcomes were assessed separately. Data extraction was based on the results provided in the included systematic reviews; where discrepancies existed between reviews, we directly extracted data from their corresponding primary studies. For the predefined subgroup analyses, additional data were directly extracted from the primary studies. For further details, refer to the eMethods.

Assessment of pooled effects and heterogeneity

For meta-analyses of continuous outcomes, mean differences (MDs) of the treatment-induced increments were chosen as effect estimates, while risk ratios (RRs) were chosen for categorical outcomes, both with their 95% confidence intervals (CI). Based on clinical and statistical reasoning (e3), we estimated all pooled effects with a random-effects model using the Paule–Mandel estimator instead of the commonly used DerSimonian–Laird, due to the improved performance of the former (e4). All calculations were performed in STATA SE version 12 (StataCorp, College Station, TX, USA). Further details on the assessment of pooled effects and heterogeneity, assessment of small-study effects, and criteria for epidemiological associations are provided in the eMethods.

The electronic searches yielded a total of 497 hits (eFigure 1). After excluding inappropriate studies (eTable 2), a total of 29 systematic reviews remained for inclusion in our study. Table 1 provides an overview of the characteristics of the included systematic reviews and eBox 2 gives a detailed description.

eBox 2
Characteristics of the included systematic reviews
Enlarge All figures

Risk of bias and methodological adequacy

Table 1 reports on the assessment of risk of bias in the included systematic reviews and eTable 3 provides results for their methodological adequacy. A detailed description is provided in eBox 3.

eBox 3
Risk of bias and methodological ad
Enlarge All figures

Of the included systematic reviews, 18 (62%) performed meta-analyses of primary studies of any kind. After applying the eligibility criteria to their corresponding primary studies (including primary studies with comparison groups and excluding inappropriate study designs), data from 7 systematic reviews based on 20 primary studies (eBox 4) were extracted. After removing duplicate primary trials and pooling studies on the same comparison identified from different systematic reviews, 8 meta-analyses of cumulative evidence could be conducted for the primary outcome apnea hypopnea index (AHI) and the secondary outcomes Epworth Sleepiness Scale (ESS) and minimum oxygen saturation (MOS). These meta-analyses pertained to comparisons of IOA with placebo appliances, no treatment, or different appliances (custom IOA based on impressions, pre-fabricated IOA, or tongue suction IOA) in the treatment of OSA in adults (Table 2). No comparisons were available for RME, SARME, or MMA.

From the cumulative evidence on the performance of IOA, only the large improvement in AHI compared to placebo appliances was supported by robust evidence, i.e. sample sizes were adequate, heterogeneity was not an issue, the random-effects predictive intervals were consistent in favour of the intervention, and no signs of reporting bias were found (Table 3).

This umbrella review of systematic reviews summarizes the existing evidence from randomized trials on the effectiveness of IOA, RME, SARME, and MMA in the treatment of OSA. A total of 29 systematic reviews were included in the qualitative synthesis, while eligible trials from 7 of these also contributed to the quantitative synthesis. Comparisons were available only for IOA, since for RME, SARME, and MMA no high-quality evidence was identified.

Considerable evidence indicated that IOA are effective in treating OSA in adults and improving AHI compared to both placebo appliances and no treatment. The former comparison was the only one that met all the criteria for strong epidemiological associations (e42) indicating strength of evidence. By mechanically holding the mandible in a forward position, IOA not only affect the anteroposterior dimension but also provoke an increase in the lateral diameter of the velopharynx (e43). In growing children with malocclusion, functional appliances for stimulating mandibular growth may alleviate OSA symptoms (e44, e45), but evidence is scarce and thus more research is needed. In regard to the secondary outcomes, IOA might have a positive effect on ESS and MOS in adults (Table 2). However, the epidemiological strength of the associations (e42, e49) was poor, mostly due to the limited number of contributing studies.

As far as modifying factors on the effectiveness of IOA are concerned, subgroup analyses and meta-regressions indicated that baseline AHI levels were significantly associated with the observed AHI reduction (eTable 4). This could mean that patients with more severe OSA symptoms are more likely to experience greater improvements in AHI. The same association between baseline severity and improvement of symptoms was also noticed for the effect of IOA on MOS (eTable 5), but not ESS (eTable 6). Although there were some indications pointing to small-study effects, these were not confirmed with the Egger’s test. Furthermore, this association could also be explained by “regression to the mean” and needs further confirmation. It is also important to note, that OSA baseline severity might directly influence treatment choices (30) leading to IOA being used more often in mild to moderate cases with non-compliance to CPAP, since CPAP appears to be more effective in complete resolution of OSA compared to IOA (28). Although IOA are not as effective as the first-line option, CPAP, in reducing AHI, they might be better preferred by patients (e47, e48), since CPAP is associated with more serious negative aspects, which influence adherence (e48, e49) and thus the effectiveness of treatment. Due to this fact, IOA could be used alternatively to CPAP in mild to moderate OSA and in severe OSA, if CPAP is not tolerated (30).

Although RME, SARME, and MMA in the treatment of OSA are not supported by robust evidence, the existing literature points to their possible effectiveness. In a randomized crossover trial comparing RME with adenotonsillectomy in children, AHI was reduced after RME in the first arm of the trial (e50). This reduction remained stable after 36 months (e51). In adults, SARME with mini-implants reduced AHI postoperatively (e52). Finally, although existing literature on MMA is mainly comprised by inappropriate study designs, MMA seems to be as effective as CPAP, with AHI pre- and postoperatively comparable to AHI pre- and post-CPAP (e53).

On the other hand, several limitations should be considered in the interpretation of our findings:

The clinical perspective
Enlarge All figures

eBox 2
Characteristics of the included systematic reviews
Enlarge All figures

eBox 3
Risk of bias and methodological ad
Enlarge All figures 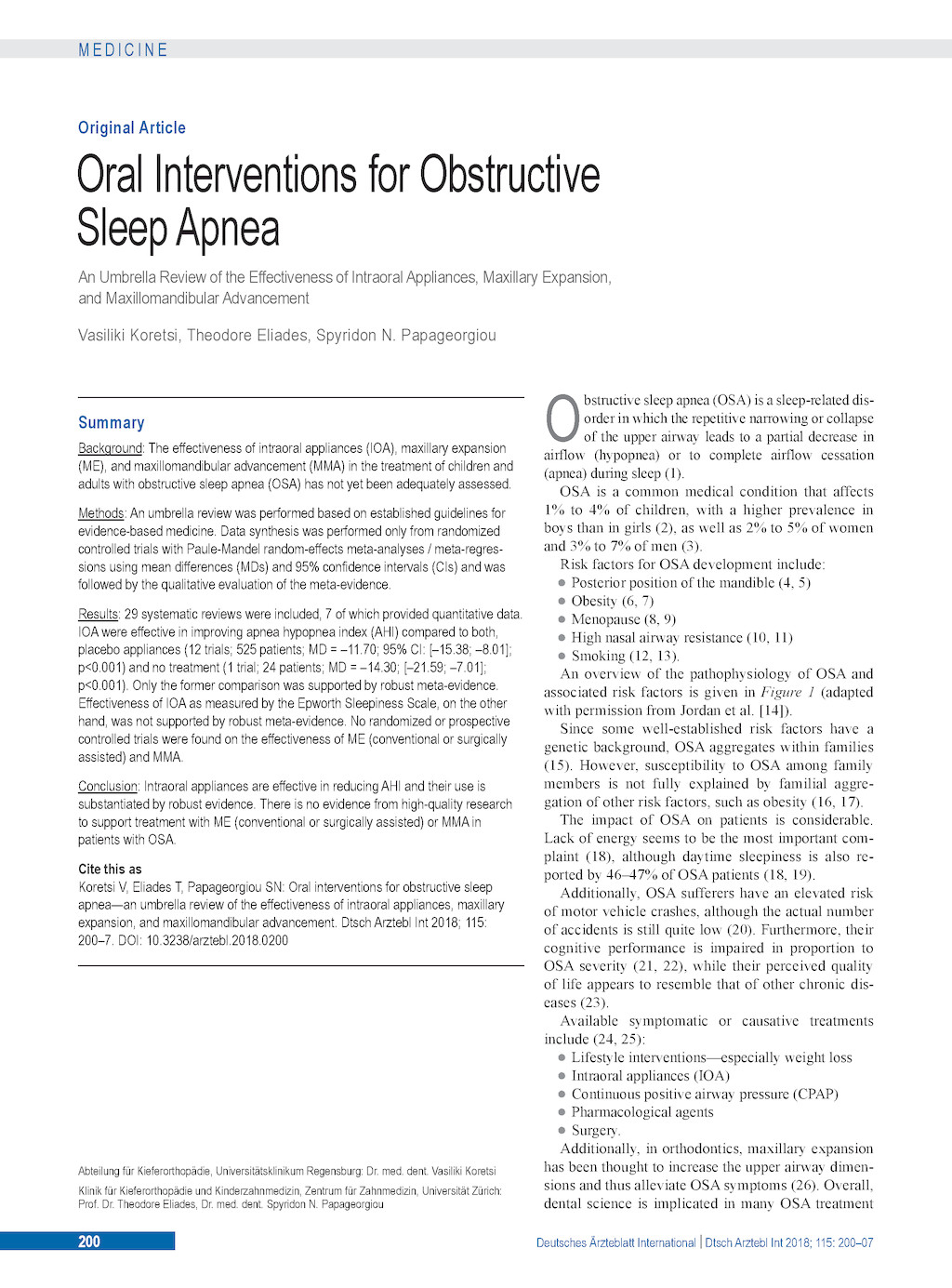