Towards Simpler and Reliable Wound Care

Surgical site infections (SSIs) are the second most common healthcare-associated infections, following respiratory tract infections (1, 2). SSIs do not only increase hospital stay and healthcare costs, but can, in case of deep SSIs, cause potentially life-threatening complications, such as sepsis. Because of the significance of SSIs, the World Health Organization (WHO) has recently published guidelines for pre-, intra- and postoperative measures to prevent SSIs (1). SSI incidence rates range from 0.7% after total knee replacement, to 1.0% after total hip replacement, up to 10% after colon surgery (2). So far, the question of an ideal wound dressing for use after surgical incisions and primary wound closure has not been answered. Based on the currently available data, the WHO guidelines do not recommend “advanced” dressings, such as hydrocolloid dressing and hydroactive or silver-impregnated dressings, for surgical wounds after primary wound closure (1).

This study shows: One wound dressings is not superior to the other

In this edition, the results of a randomized study by Bredow et al., comparing an absorbent wound dressing with a conventional wound dressing, are published (3). This study included 209 patients undergoing elective surgery who were stratified in equal parts for total knee replacement, total hip replacement and spinal surgery and for whom hospital stays of at least 6 postoperative days were expected. The primary endpoint was postoperative blistering next to the incision wound. The absorbent silicone dressing could be left in situ for up to 7 days, i.e. beyond the end of the follow-up period. Blistering was only observed in one case: a patient of the intervention group who had accidentally received a conventional dressing. The study confirmed the primary hypothesis that one dressing was not superior to the other. This study was important, carefully planned and properly conducted to evaluate the efficacy of an approved medicinal product.

However, some comments on its design and conduct are warranted. Blistering under a surgical dressing is a phenomenon more commonly observed in orthopedic and trauma surgery and associated with the use of self-adhesive dressings. According to the authors’ explanation, it is caused by shear forces between epidermis and dermis, resulting in the separation of the dermis. During removal of the dressing, the epidermis is lifted off together with the (self-adhesive) dressing, leaving the dermis exposed without protection. Presumably, in dressings close to joints, these shear forces are augmented by additional movements. In orthopedic surgery, incidence rates for blistering under surgical dressings of 15 to 35% have been reported, highlighting the clinical relevance of the phenomenon (4).

However, whether blistering promotes subsequent SSI (i.e. infection of the surgical incision wound itself) is doubtful. In a randomized study with 240 patients who underwent minimally invasive total knee replacement, Kuo et al. compared a silver-impregnated hydrocolloid dressing (intervention group) with an antimicrobial-impregnated dressing (control group). In the intention-to-treat analysis, the incidence of blistering was 2.5% in the intervention group compared to 5% in the control group; the incidences for SSI grade 1 (superficial) were 0.8% and 8.3%, respectively (5). If blistering (at a distance from the surgical wound) had promoted the development of SSI, one would have expected a higher SSI incidence in the intervention group too. An older study by Koval et al. showed that the incidence of postoperative blistering after orthopedic hip surgery was determined more by the type and duration of the surgical procedure itself than by the dressing used (6).

For several relevant secondary endpoints, the study by Bredow et al. showed advantages for the use of the absorbent wound dressing: fewer dressing changes, better patient comfort, improved handling, and easier removal. For these (and some other) secondary endpoints, the advantages of using the absorbent wound dressing compared to the conventional wound dressing were statistically significant (3). However, it is important to point out here that the evidence-based practice of postoperative wound care has changed significantly in recent years, even though these changes have not been implemented everywhere. Provided proper adaption of wound margins (using surgical staples, interrupted stitches or subcuticular suture), epithelization of the surgical wound is completed after 48 hours. Any SSI which may occur later in the postoperative course is caused by bacteria that were brought to deeper parts of the wound during the operation (and not by secondary penetration into the wound). Consequently, current Cochrane analyses do not focus on the question whether dressings are still required after 48 hours, but on whether they can be removed earlier (7) or whether postoperative showering earlier than 48 hours after surgery is acceptable (8). Whether the prophylactic use of negative pressure wound therapy (vacuum-assisted wound closure) in patients in whom increased amounts of wound exudate are expected and in patients with edema of primary closed wounds is advantageous, remains to be shown (9).

After concepts for faster postoperative recovery had initially been adopted in visceral surgery (“fast-track”, “enhanced recovery after surgery“ [ERAS]), such concepts have now been reported in orthopedic surgery. For example, Auyoung et al. succeeded in reducing postoperative hospital length of stay after total knee replacement from 76.6 hours to 56.1 hours without increase in re-admission by establishing an ERAS pathway (10). Therefore, the challenges for the future are, besides finding the best dressing, to establish a reliable follow-up program for outpatient wound care to detect any delayed SSI in time. 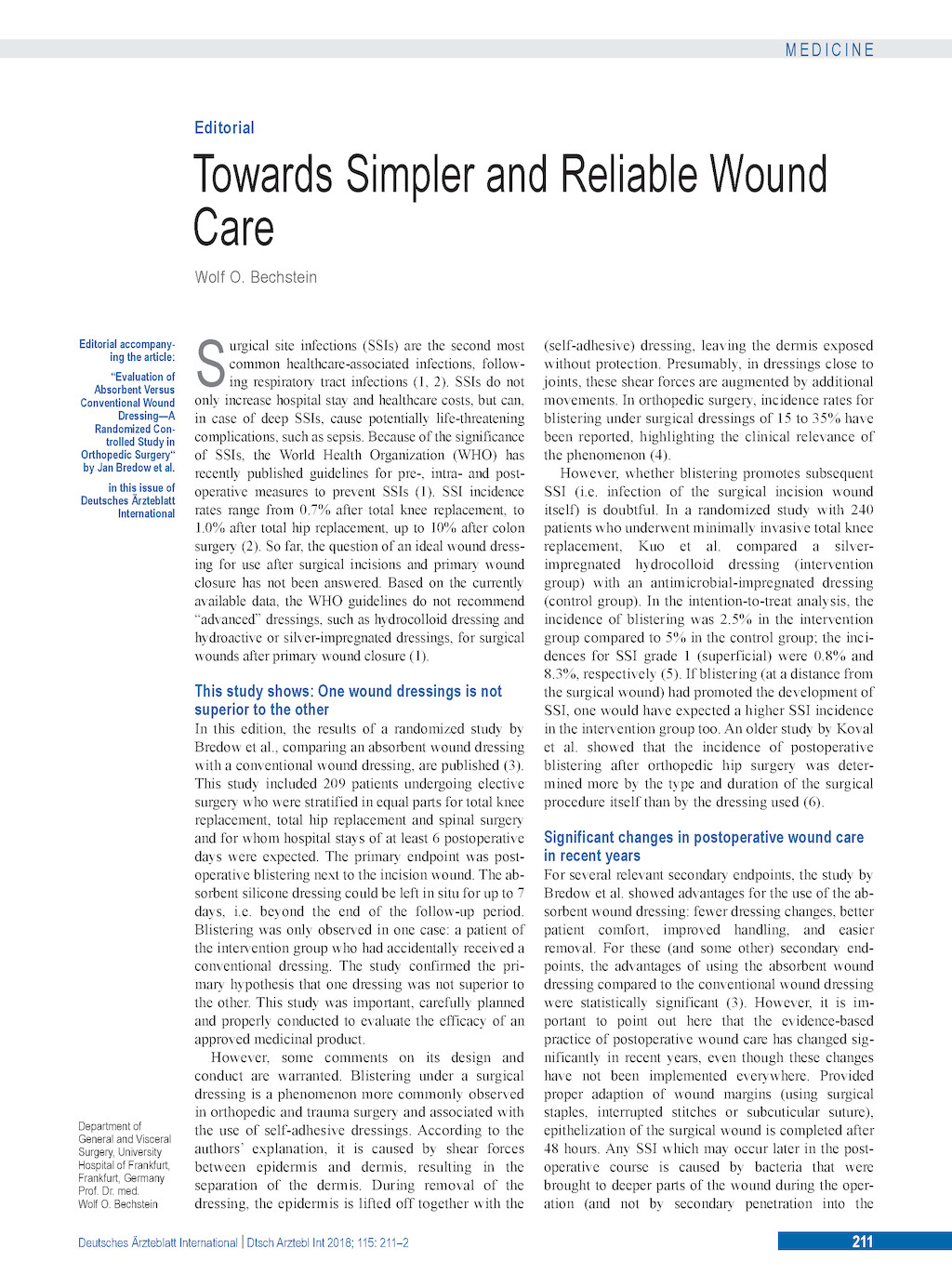