Déjà-vu—How Not to Make the Same Mistake Twice

Dtsch Arztebl Int 2018; 115: 233-4. DOI: 10.3238/arztebl.2018.0233
Editorial to accompany the articles: “The Use of Tobacco, E-Cigarettes, and Methods to Quit Smoking in Germany“ by Daniel Kotz et al. and “E-Cigarettes and the Use of Conventional Cigarettes“ by Matthis Morgenstern et al. in this issue of Deutsches Ärzteblatt International

Last week, the Austrian government overturned the plan to ban smoking. In bars and restaurants, smoking will continue to be allowed. In Germany, the smoking ban in public buildings, bars and restaurants is eased by numerous exemptions. Furthermore, controls to ensure adherence to the German Law for the Protection of Non-Smokers are rare and not implemented nationwide. The effect of such an attitude is clearly evident in the results of the German Study on Tobacco Use (DEBRA) published in this issue of Deutsches Ärzteblatt International (1). With 28.3%, the prevalence of smoking in Germany was significantly higher compared to the rates in Scandinavian countries and the United Kingdom where substantially broader legislation for the protection of non-smokers was established years ago. Smoking prevalence is strongly associated with gender, social status and center of life: Smoking was most common among men with low income from the new German federal states.

Today, the significance of smoking for most cancer diseases and many other chronic conditions is undisputed. On average, smokers die significantly earlier than nonsmokers, as, for example, demonstrated by a large US study on patients with bronchitis (2). Smoking cessation at any time will improve prognosis—even patients who stopped smoking only after being diagnosed with cancer showed positive effects (3).

The DEBRA study found that 28.1% of smokers attempted to stop smoking during the study period, but frequently failed to quit the habit. Smoking is an addiction. Various smoking cessation aids, such nicotine replacement treatments, behavioral programs, and medications alleviating withdrawal symptoms, are available; however, which method shows the greatest promise of success remains unclear. Smoking cessation programs, despite proven positive effects, are not offered to the extent which is required and are rarely funded by health insurances.

Ten years ago, the electronic cigarette was introduced with the promise to improve this situation. These battery-powered electronic devices release aerosolized substances without combustion processes for inhalation. Today, countless variants of e-cigarettes are available which come in many flavors. They contain nicotine in various concentrations and some are even nicotine-free. Furthermore, so-called heat-not-burn products are available, vaporizing conventional cigarettes (at up to 300 degrees celsius) instead of burning them (at about 800 degrees celsius); the prototype of these products is the iQOS™ by Philip Morris which bears resemblance to an iPhone. It is claimed that they help to give up smoking conventional cigarettes, while being significantly less harmful.

E-cigarette as a gateway drug

In various countries, e-cigarettes have been adopted differently. While the DEBRA cohort showed that 9.1% of the respondents had tried or continuously used e-cigarettes over the course of one year, the proportion was more than 40% in the United Kingdom. British health policy promotes (4) e-cigarettes with the argument that e-cigarettes are justified even if they cause certain harm as long as they prevent the harm caused by smoking cigarettes. The European Respiratory Society strongly opposed this position in a letter to the editor, presenting points of criticism which were also formulated in a position paper by the German Respiratory Society (Deutsche Gesellschaft für Pneumologie und Beatmungsmedizin, DGP) (5). These include that the potential harm of e-cigarettes is not yet predictable because data from toxicological studies are insufficient and long-term data have not yet become available; the results from studies evaluating the success of e-cigarettes in smoking cessation are contradictory; and the potential of e-cigarettes as a gateway drug should not be neglected.

The paper by the Institute for Therapy and Health Research in Kiel, Germany, presented in this issue of Deutsches Ärzteblatt International appears to support the last hypothesis (6). In their study among 10th grade students, 14.3% of the respondents reported to have used e-cigarettes. Of those who had never smoked before, 12.3% started smoking within the study period of 6 months. This risk was 2.2-times higher when the student had earlier used e-cigarettes. It is especially worrying that the adolescents who started smoking conventional cigarettes via e-cigarettes were, according to their personality profile, typically at a lower risk of becoming a conventional cigarette smoker.

Of course, in the fight against conventional smoking any means available should be used. Furthermore, the follow-up period in the study by Morgenstern et al. is too short to demonstrate that smoking developed into nicotine dependence. However, their results are in line with data from long-term studies conducted in the United States and Mexico, revealing exactly this course. Here, it was also shown that adolescents frequently consumed both electronic and conventional cigarettes in parallel.

When I started my specialist training in 1985, the tobacco industry was attempting to provide evidence that cigarettes are harmless by conducting numerous studies. Many of these studies were sponsored by obscure foundations directly funded by the tobacco industry.

Today, the harmfulness of cigarettes is beyond question. The tobacco industry is shifting their field of activity from cigarettes to other products. More than 90% of the e-cigarette market is in the hands of major tobacco companies. Today as 30 years ago, the harmfulness of the new product is questioned and studies are funded to prove this. Unfortunately, it is not just a bad joke that the largest sponsor is a foundation called “Foundation for a Smoke-Free World”, working with hundreds of million dollars of funding by Philip Morris.

Inhalative products of any kind, regardless of whether they are vaporized or burnt, are harmful. To classify these products as more or less harmful—despite the lack of evidence to support this—is not helpful at all; to the contrary, it is detrimental when the number of users of such products is further increased by playing down health risks and targeting adolescents with advertising. Both articles published here show that we have to invest more and earlier into creating awareness of the damage caused by smoking and that we should stop uncritical advertising. Studies evaluating the harm caused by evaporators should be conducted independently and rather sooner than later. Before these data are available, we should not give e-cigarettes a clean bill of health. Otherwise, it is likely that we will soon be confronted with an American proverb: “Fool me once, shame on you. Fool me twice, shame on me.”

Translated from the original German by Ralf Thoene, M.D. 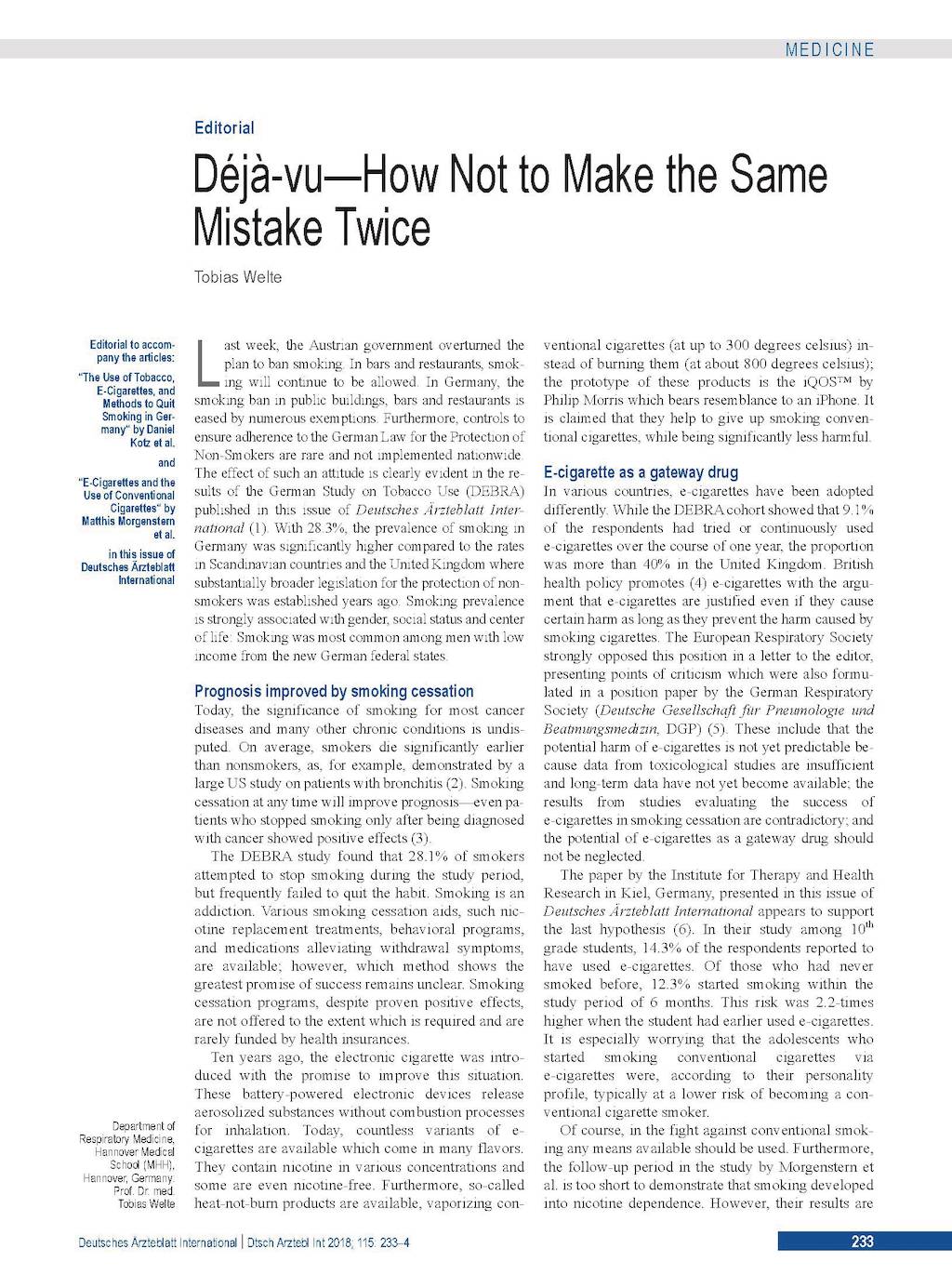