Background: Heart failure affects 1–2% of the population and is associated with elevated morbidity and mortality. Cardiac arrhythmias are often a result of heart failure, but they can cause left-ventricular systolic dysfunction (LVSD) as an arrhythmia-induced cardiomyopathy (AIC). This causal relationship should be borne in mind by the physician treating a patient with systolic heart failure in association with cardiac arrhythmia.

Methods: This review is based on pertinent publications retrieved by a selective search in PubMed (1987–2017) and on the recommendations in current guidelines.

Results: The key criterion for the diagnosis of an AIC is the demonstration of a persistent arrhythmia (including pathological tachycardia) together with an LVSD whose origin cannot be explained on any other basis. Nearly any type of tachyarrhythmia or frequent ventricular extrasystoles can lead, if persistent, to a progressively severe LVSD. The underlying pathophysiologic mechanisms are incompletely understood; the increased ventricular rate, asynchronous cardiac contractions, and neurohumoral activation all seem to play a role. The most common precipitating factors are supraventricular tachycardias in children and atrial fibrillation in adults. Recent studies have shown that the causal significance of atrial fibrillation in otherwise unexplained LVSD is underappreciated. The treatment of AIC consists primarily of the treatment of the underlying arrhythmia, generally with drugs such as beta-blockers and amiodarone. Depending on the type of arrhythmia, catheter ablation for long-term treatment should also be considered where appropriate. The diagnosis of AIC is considered to be well established when the LVSD normalizes or improves within a few weeks or months of the start of targeted treatment of the arrhythmia.

Conclusion: An AIC is potentially reversible. The timely recognition of this condition and the appropriate treatment of the underlying arrhythmia can substantially improve patient outcomes.

Heart failure is one of the major causes of morbidity and mortality in western countries. Of the total population, approximately 1%–2% of adults and >10% of over 70-year-olds are affected (1–3). Together with the ever-aging population, heart failure poses one of the greatest challenges to modern medicine and health economics.

The diagnostic algorithm of systolic heart failure places paramount importance on identifying the underlying cause of ventricular contractile dysfunction in order for causal treatment to be initiated and prognosis to be assessed (4).

Arrhythmia-induced cardiomyopathy appears to occur at any age. Although the clinical picture has been known for decades (10) and is well-characterized in animal models, prospective clinical or reliable epidemiological data are lacking and its prevalence is ultimately unknown.

PubMed literature for the period 1987–2017 was selectively searched on the basis of the authors‘ clinical and scientific experience. A detailed description can be found in the eMethods.

Persistent tachycardia induces systolic heart failure with a cell-typical phenotype of heart failure in animal models in a reproducible manner (Figure 1) (14–16). Here one observes reduced systolic contractility and resultant diminished cardiac output, increased wall dilatation, greater wall tension, and cardiac chamber enlargement within days to weeks (15, 17). In the further course (generally after several weeks depending on the model), the full heart failure phenotype with marked LVSD and cardiac chamber dilatation develops as a result of persistent tachycardia and excessive neurohumoral activation (8, 15, 17–20). Once tachycardia ceases, the described changes normalize within days to weeks in animal models and within weeks to months in humans (Figure 1) (21).

In animal models, the degree of LVSD increases according to the rate and duration of pacing (22). Other factors also appear to influence the pathogenesis of arrhythmia-induced cardiomyopathy. For example, LVSD progresses more rapidly and is more pronounced upon tachy-pacing from the ventricles as compared to rapid atrial stimulation. (8, 23). The dyssynchronous electrical excitation of the heart resulting from ventricular stimulation (loss of physiological AV sequence and synchronous ventricular activation) thus appears to magnify the effect of tachycardia as a cofactor.

The functional and molecular effects of prolonged tachycardia on the myocardium and the development of heart failure have been investigated almost exclusively in animal models and, as such, can potentially only be extrapolated to humans to a limited extent.

The key diagnostic criterion of arrhythmia-induced cardiomyopathy is the detection of persistent arrhythmia or pathological tachycardia in conjunction with LVSD that cannot be otherwise explained. A number of arrhythmias can cause arrhythmia-induced cardiomyopathy (Box) (8). Although the duration and ventricular rate of the tachycardia are important factors, there are no threshold values for these parameters (8). Relevant arrhythmia cannot always be diagnosed by means of a one-off 12-channel ECG. ECG holter monitoring is able to identify, e.g., recurrent tachycardia, mean ventricular rate in atrial fibrillation, and the frequency of premature ventricular contraction.

Box
Arrhythmias that can trigger arrhythmiainduced cardiomyopathy
Enlarge All figures

Figure 2
Flow diagram for the diagnosis of arrhythmia-induced cardiomyopathy (AIC).
Enlarge All figures

At present, the diagnosis of arrhythmia-induced cardiomyopathy is considered conclusive if LVSD is completely (or partially in the case of pre-existing heart disease) reversible within only a few weeks or months of successful treatment of arrhythmia (8).

The treatment of arrhythmia-induced cardiomyopathy focuses on treating the arrhythmia—primarily its elimination—or alternatively, e.g., in the case of permanent ventricular fibrillation, by controlling ventricular rate (8, 31–38). In LVSD, the spectrum of drugs suitable for the treatment of arrhythmia narrows to essentially beta-blockers, digitalis preparations, and amiodarone. Other antiarrhythmic agents may only be used on the basis of a careful benefit-risk assessment. Therefore, depending on the patient‘s age, comorbidities, and type of arrhythmia, catheter ablation is generally the treatment of choice in the long term.

It is not uncommon in clinical practice for atrial fibrillation and LVSD to be diagnosed simultaneously for the first time, making a causal link unclear. In such cases, the initial aim should be pharmacological rate control (beta-blockers ± digitalis) and drug therapy for heart failure (e2), since atrial fibrillation in the setting of heart failure may be present at the time of first contact. Optimal ventricular rates have not been definitively established as yet. At present, 60–100/min at rest and <110/min during light exercise are recommended (1). Particularly in the case of continued symptoms, inadequate rate control, and/or persistent LVSD, an attempt (if not contraindicated) at rhythm control using electrical cardioversion and, where appropriate, amiodarone are recommended. Depending on disease course and taking other diagnostic tests (Figure 2) into consideration, it is possible to differentiate whether LVSD is caused by:

The majority of randomized studies on the treatment of atrial fibrillation in LVSD predominantly included patients with chronic systolic heart failure and structural heart disease. Compared with rate control only, rhythm control using electrical cardioversion and amiodarone resulted in improved left ventricular pump function and quality of life (e5), but not in reduced mortality (e6). In a meta-analysis (26 studies, 1838 LVSD patients, 61% structural heart disease, 39% idiopathic), the average left ventricular ejection fraction improved from 40% to 53% following left atrial ablation of atrial fibrillation (e7). Although this positive effect was seen in an earlier observational study also on structural heart disease, it was less pronounced compared with primary idiopathic LVSD (increase in left ventricular ejection fraction of 16% ± 14% and 24% ± 10%) (12).

Only a handful of prospective studies have investigated the effect of catheter ablation in atrial fibrillation specifically in patients with primary idiopathic LVSD (and hence most likely purely arrhythmia-induced cardiomyopathy). In an investigation of 16 patients, left ventricular pump function normalized (ejection fraction 40% ± 10% at baseline and 60% ± 6% after 6 months, p <0.001) in 15 subjects with stable sinus rhythm (27). A randomized study of 68 patients with primary idiopathic LVSD recently showed that even in the case of prior optimal pharmacological rate control, ablation of atrial fibrillation significantly improves left ventricular ejection fraction (32% ± 9% to 50% ± 11% versus 34% ± 8% to 38% ± 9% in continued rate control, p <0.0001) (11). If no ventricular LGE was detected on previous MRI, left ventricular ejection fraction normalizes in 75% of patients following ablation.

In summary, the preservation of sinus rhythm should be the goal in arrhythmia-induced cardiomyopathy secondary to atrial fibrillation. In terms of treatment, catheter ablation in the left atrium should be considered, taking the age, comorbidities, symptoms, and desires of the patient into account (e2). The risk of relevant procedure-related complications is around 5%, and more than one procedure is required to stabilize sinus rhythm in approximately 50% of cases (e2). In the case of treatment-refractory recurrent or permanent atrial fibrillation accompanied by a ventricular rate that cannot be adequately controlled pharmacologically, a combination of atrioventricular node ablation and (potentially bi-) ventricular stimulation (ablate and pace) is a safe and effective treatment option (e2, e8, e9).

An analysis of >1000 patients with atrial flutter found the incidence of arrhythmia-induced cardiomyopathy to be approximately 8% (13). Arrhythmia-induced cardiomyopathy patients had higher ventricular rates (109 ± 19 versus 84 ± 23/min) during atrial flutter compared with LVSD of other etiology (e10). Pharmacological control of ventricular rate is more challenging in atrial flutter than it is in atrial fibrillation, necessitating rhythm control more often. Electrical cardioversion is an effective method for the acute restoration of sinus rhythm. However, in view of the risk of recurrence, one should consider catheter ablation, which is associated with high success and low complication rates in typical atrial flutter (e11). Upon ablation of atrial flutter in patients with concomitant LVSD, an improvement in left ventricular function was seen in over 50% of the patients, and complete normalization in approximately 75% of these cases. (13, e10).

Vagal maneuvers or the rapid administration of adenosine are recommended for the acute management of SVT (e11, e14). However, in the case of SVT-related arrhythmia-induced cardiomyopathy, these measures generally achieve a transient cessation of SVT at best. Where possible, catheter ablation should be aimed for in terms of curative treatment (e11, e14). Success rates vary between 80% and 95% depending on the mechanism of SVT (e11, e14). Ablation is only recommended in infants and young children if pharmacological treatment is not feasible or unsuccessful (e14).

Ventricular tachycardia only rarely causes arrhythmia-induced cardiomyopathy, likely due to the fact that it generally causes acute symptoms, thereby leading to treatment.

With long-term success rates of between 66% and 90%, catheter ablation is the treatment of first choice for the elimination of premature ventricular contractions that trigger arrhythmia-induced cardiomyopathy (e22, e23). Alternatively, one can consider an attempt at pharmacological treatment, primarily with amiodarone, depending on age, comorbidities, and the presumed focus of premature ventricular contractions (e24).

Following effective treatment, left ventricular pump function normally recovers within a few weeks to months (8, 33, 36, e1, e25, e26). In the authors‘ opinion, initial outpatient follow-up should be frequent (e.g., every 1–3 months) and should include both ECG holter monitoring and an echocardiogram. Depending on the triggering arrhythmia, and despite primarily successful catheter ablation, arrhythmia recurrence can occur at an incidence of approximately 5% (SVT) to around 50% (atrial fibrillation). This can result in failure of left ventricular pump function to recover completely during follow-up (e27) or, following initial normalization, to rapidly worsen again (e1). The recurrence rate of arrhythmia-induced cardiomyopathy following initially successful treatment has not been definitively elucidated: a study on 12 patients (observation period of 53 ± 24 months) put it at approximately 25% (e25).

Conflict of interest statement
Prof. Sossalla received reimbursement of travel and accommodation expenses from Berlin Chemie, Menarini, Novartis, Bayer, Böhringer Medtronic, and Servier. He received lecture fees from Novartis, Menarini, and Berlin-Chemie. He received funding from Novartis for a research project of his own initiation.

Translated from the original German by Christine Schaefer-Tsorpatzidis

Box
Arrhythmias that can trigger arrhythmiainduced cardiomyopathy
Enlarge All figures

Figure 2
Flow diagram for the diagnosis of arrhythmia-induced cardiomyopathy (AIC).
Enlarge All figures 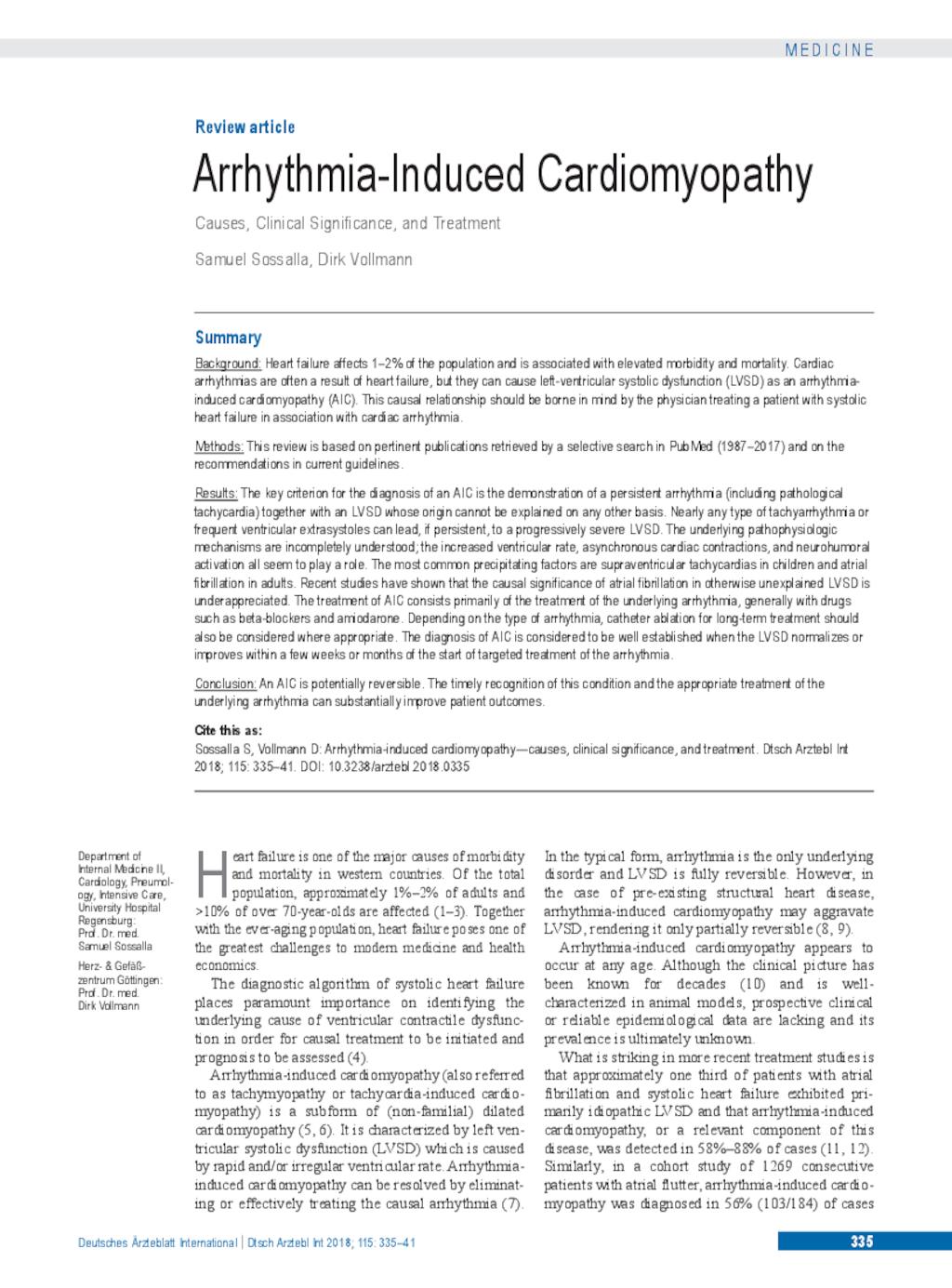