We thank our correspondents for their responses to our article (1).

Regarding radiotherapy: Randomized controlled trials of the effect of radiotherapy in shoulder pain are lacking, with the exception of the study reported by Plenk (2). A review article of the historical assessment describes how in the US the method was abandoned as early as in the 1960s because of too few studies (3). In the “critical study” by Plenk (2), patients with peritendinitis of the shoulder were randomized and blinded and received radiotherapy, with controls being shielded by a lead plate from radiation. After six weeks, no clinical or radiological differences were seen between groups. The studies by Ott et al (4, 5) did not differentiate any pathology, had no control group, and randomized two radiotherapy protocols. The evaluation of pain only, without clinical examination, was not significantly different. The DEGRO S2e guideline (4) refers only to the two studies by Ott and confirms for the radiotherapy protocol an evidence level of only 4, recommendation level C. An effect of the “pain radiotherapy” has not been confirmed in the literature and can at best be assumed. Any indication has to be classed as empirical.

Regarding the conservative treatment of impingement syndrome: We thank our correspondent for the emphasis on functional associations in the pathogenesis of shoulder pain. However, this does not release us from describing different etiologies and referring to terms and concepts that are firmly established in the international literature on the subject. In terms of biomechanics, we placed our emphasis on the shoulder joint’s force fit connection by muscle activity and its full range of motion, and separated out functional causes such as muscular dysbalances and mechanical “extrinsic” factors. We mentioned conservative approaches with evidence levels (for example, a program for stepwise shoulder training). The extent to which “optimizing movement patterns and behavioral habits” improve not only clinical symptoms but also help to “prevent the development of . . . structural defects” remains to be seen.

Regarding impingement syndrome: The Dutch guideline is the only existing one for the clinical syndrome of subacromial pain. It also defines the importance of the differential diagnostic clinical examination with specific tests as a first step and imaging after 6 weeks. The guideline also mentions structural pathologies—for example, bursitis, calcific tendinitis, or biceps lesions. Although the term “subacromial pain syndrome” avoids the association with the historical impingement theory, it does not spare us from the necessity of understanding the pathophysiological associations and treatment modalities of the individual symptoms, which again appear under an umbrella term—such as “periarthritis humeroscapularis” in the time of Duplay. The statement that “subacromial pain syndrome” should not be treated with surgery if possible, is similarly misleading if the underlying pathology is not known. In this context we wish to mention the differentiated treatment of rotator cuff lesions (6). 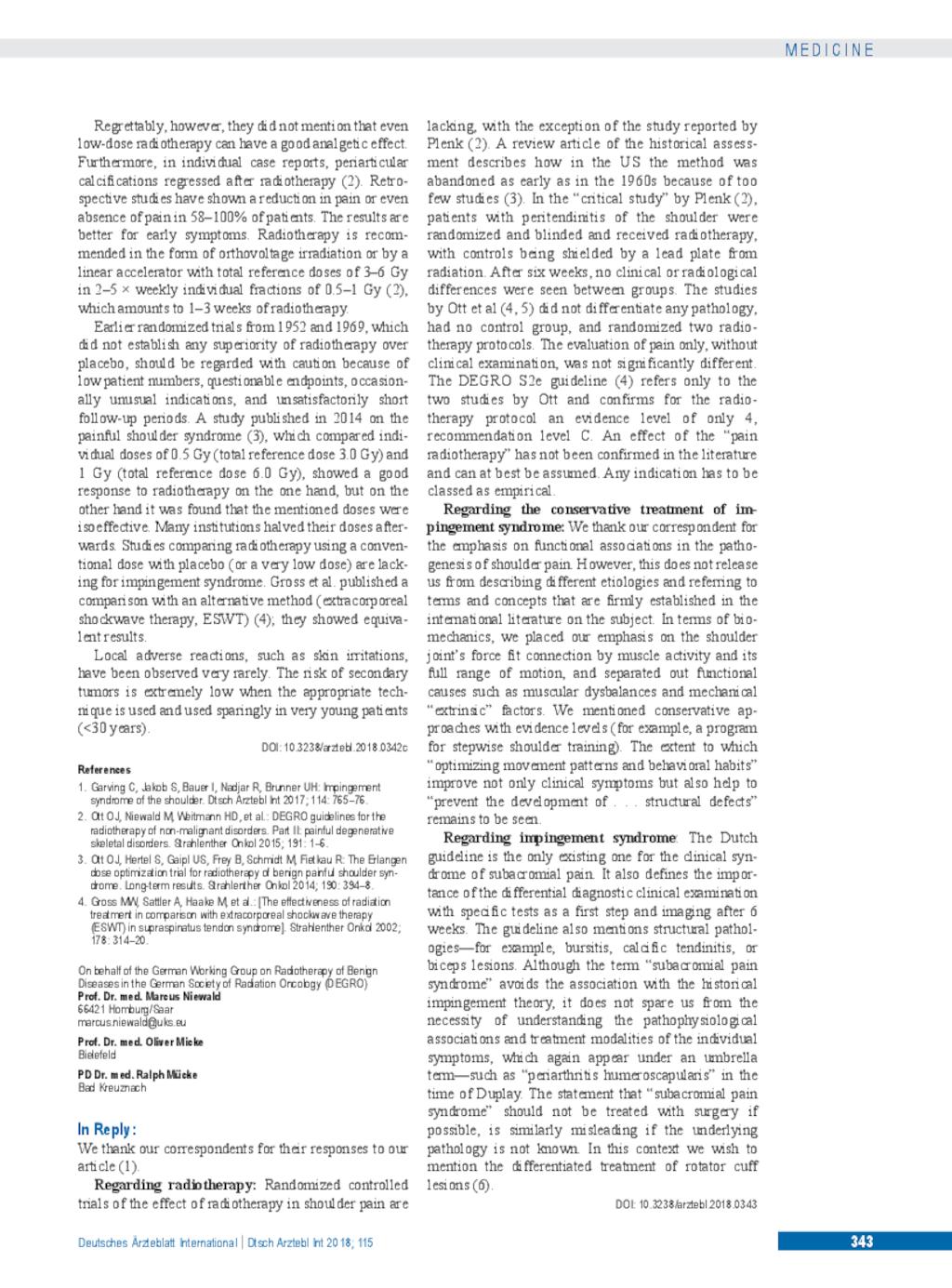