Background: Because of improvements in cancer treatment, more than 80% of all children with cancer now survive at least five years from the time of diagnosis. As a result, late sequelae of cancer and its treatment have become more common, particularly second malignancies. We studied the current incidence of second malignancies among childhood cancer survivors in Germany.

Methods: This study is based on the cohort of the German Childhood Cancer Registry (Deutsches Kinderkrebsregister, DKKR). Persons given the diagnosis of a first malignancy at any time in the years 1980–2014 who were no more than 14 years old at the time of diagnosis and survived at least six months thereafter were included in the study. Cumulative incidences and hazard ratios were calculated, and comparisons with the general population were made with the aid of standardized incidence ratios (SIR).

Conclusion: The cumulative incidence of second malignancies is 5.4% at 25 years and 8.3% at 35 years; these figures may be slight underestimates. The DKKR is an epidemiologic registry containing no data about treatment, so the effect of treatment on the risk of second malignancies could not be studied. The acquisition and evaluation of treatment data for the overall cohort is currently one of the main tasks for research on the late sequelae of childhood cancer. This may enable conclusions to be drawn about whether treatment strategies that have been introduced to lessen the risk of a second malignancy actually have the desired effect.

Nowadays in Germany, 85% of children who had cancer before the age of 15 survive for at least 5 years; 83% survive for 10 years (1). Current research is therefore focusing increasingly on the occurrence and prevention of late sequelae. One of the most life-threatening late sequelae is the development of a second malignancy. The International Agency for Research on Cancer (IARC) describes such malignancies as a second neoplasm of different topology and/or morphology in a patient (2). Recurrences, metastases, infiltrations, or transformations are not classed as second malignancies (2). Different publications have shown an increased risk of second malignancy after childhood cancers (3). Potential risk factors are genetic predisposition, chemotherapy, radiotherapy, stem cell transplantation, and effects related to time and age (4). The US Childhood Cancer Survivor Study (CCSS) reported a cumulative incidence after 30 years of between 7.9% (5) and 9.3% (3), if only second malignancies are included that developed more than five years after the initial malignancy. In the UK, a cumulative incidence of 1.6% in those who reached age 20 and 13.6% in those who reached age 60 was published (6). In 2009 the German Childhood Cancer Registry (GCCR) reported a cumulative incidence over 25 years of 3.3% (7) Previously a standardized incidence ratio (SIR) for second malignancies of 12.5 was observed compared with the general population up to age 15 (8).

Since 1980 the GCCR has collected all cases of childhood malignancy in those younger than 15 in the former West Germany, and since 1991 the new federal states have been included (1). Within the initial five years, follow-up care was delivered by oncologic pediatric hospitals (9), which reported to the respective clinical study (therapy optimization studies). Subsequently, patients still receiving aftercare (at least up to the age of 18) were actively followed up by the hospitals or, alternatively, in a 5-year cycle by the GCCR (1). The second malignancies reported by patients were validated by contacting the treating doctors or hospitals. A very small proportion of second malignancies reported could not be validated by a hospital, but some of these were registered if they were plausible.

We included in the analysis all patients who developed a first malignancy when younger than 15 years of age, as defined by the ICCC-3 (10), who had been diagnosed between 1 January 1980 and 31 December 2014 and who were resident in Germany at the time of diagnosis. The patients had to have survived at least six months without developing a second malignancy. Patients were included in the analysis only if information on sex and date of birth was complete. In total, 1262 patients with a second malignancy were observed (Table 1). For the purpose of comparison with the German general population we used the categories of the ICD-10. Malignant non-melanoma skin cancer (ICD-10 C44) and non-malignant tumors of the central nervous system were not included in the comparison with the general population because there were no relevant comparison data for Germany.

Cumulative incidences with their respective 95% confidence intervals were calculated by using the Aalen–Johansen method, taking into account concurrent risks (11) for all years up to a maximum of 35 years after the initial malignancy. The cumulative incidence was calculated for all types of malignancies combined as well as separately for solid and systemic first malignancies. The event “death” was considered a concurrent risk in all evaluations. In analyzing second malignancies of the thyroid and breast, lymphocytic leukemia, or acute myeloid leukemia, we also included all other second malignancies as concurrent events.

We used the method developed by Fine and Gray (12) to calculate hazard ratios, using the covariables “systemic” versus “solid” first malignancies, age at diagnosis of the first malignancy, and sex, with death considered as a concurrent event.

To calculate the standardized incidence ratio we stratified the number of expected cases by the age distribution of the cohort and the cancer incidence rates for Germany from the Robert Koch Institute’s cancer registry data by sex, age, and calendar year (13). This analysis was restricted to the time period 1995–2014, because no information was available for earlier calendar years. The standardized incidence ratio was calculated for all second malignancies combined as well as separately for breast cancer, thyroid cancer, and leukemia.

In total we observed 1262 cases of second malignancy according to ICCC-3 in the cohort. 140 cases were excluded from the comparison with the general population (1995–2014), as they had been diagnosed before 1995. A further 314 cases of melanoma skin tumors and non-malignant neurological tumors were also excluded because they were not included in the data from the Robert Koch Institute.

Figure 1
Distribution of latency periods between first and second malignancies by type of second malignancy separated out for men and women, who survived for at least six months a childhood cancer in Germany between 1980 and 2014
Enlarge All figures

The results were confirmed by the regression models that had been adjusted for sex, age reached, and year of diagnosis. The adjusted hazard ratios showed an increased risk for developing a second malignancy after a systemic first malignancy (HR = 1.22 [1.09; 1.36]) and for female patients (1.29 [1.16; 1.44]).

Of 47 650 children who survived a cancer diagnosis for at least six months since 1980, 1262 developed a second malignancy within 35 years.

Compared with the German general population, women had 7.08 times the risk of developing a second malignancy and men 5.83 times the risk. The reason for the lower standardized incidence ratio in the age group 10–14 years at diagnosis of the first malignancy seems to be primarily the shorter follow-up period in this group.

Our results are consistent with the international literature, although direct comparisons were difficult because of different study designs. Without non-melanoma skin cancer, the US CCSS Study reported a cumulative incidence between the 6th and 30th year of 7.9% (5). This is similar to our findings, although the studies used different methods. We included all second malignancies that occurred at least six months after a first malignancy, whereas the CCSS Study included only second malignancies that developed after five years or longer. In our evaluations we observed a large number of systemic second malignancies in the first five years. Furthermore, our data were based in a mean follow-up period of 10 years, whereas the data of the CCSS Study reflected results after a mean follow-up period of 23 years.

A French survivors’ cohort of 3254 children with childhood cancer that included those who had survived for two years showed a cumulative incidence for thyroid adenoma of 4.3% after 40 years; this is twice the rate we found in our analysis (18).

In 1998, Westermeier et al. reported a standardized incidence ratio of 12.5 for second malignancies in children younger than 15 years of age when the first malignancy was diagnosed, compared with a general incidence of first malignancy in children younger than 15 years in Germany (8), on the basis of 127 second malignancies and a maximum follow-up period of 15 years.

One of the strengths of our study was the size of the cohort, which included all childhood cancer cases in Germany, as well as the long follow-up period. Thanks to passive and active follow-up, we achieved a high degree of completeness for the second malignancy reports. Furthermore, all reports from patients were medically validated. Another strength was the option of including second malignancies that appeared as early as six months after the first malignancy, thereby reaching an exact estimate of the cumulative incidence in the first years.

In the early years of the GCCR, no standardized notification systems existed for second malignancies. Although different methods were used in order to capture as many second malignancies as possible, we cannot rule out slight under-reporting, especially as we did not link up with adult registries.

Under-reporting across all person-years is also possible, since in some patients, follow-up was incomplete. This, however, did not affect cumulative incidence rates since these patients were censored at the date of their latest/last vital status.

The standardized incidence ratio was calculated only for a subgroup of the cohort, because population-based incidence rates for cases older than 15 years were not available for the entire period and all diagnoses. This is regrettable since non-malignant neurological tumors—especially meningiomas—and malignant non-melanoma skin tumors—especially basal cell carcinomas, which both had to be excluded for the SIR calculation, represented 8.9% (n = 125) of all second malignancies in our database.

A further source of possible bias is the fact that the expected case numbers were based on data from the general population and included cases of second malignancies. In the young age groups under study, second malignancies may account for a substantial proportion of the comparison rates, which may result in an underestimate of the standardized incidence ratio. Second malignancies after childhood cancer account for 1% of all cancers occurring before age 45 in Germany.

Many studies have shown an association between the treatment of the first malignancy and the risk for a second malignancy (3–5, 14, 16, 17). However, the GCCR does not collect therapeutic information, although a case–control study is currently in progress in order to reconstruct this information.

Second malignancies represent a heavy burden on the survivors of childhood cancers and currently affect more than 8% of survivors in Germany. In order to reduce the risk of second malignancies, more research into therapeutic associations or genetic risk factors is needed. Since in Germany, more than 95% of children are treated within the framework of a therapy optimization study, it is possible to tailor therapeutic strategies quickly to newly identified long-term risks.

Acknowledgment
The authors thank the German Society for Paediatric Oncology and Haematology (GPOH) and the associated therapy optimization and registry studies, as well as the reporting hospitals for making their data available. We also thank the patients and their parents for their permission to collect their data in the GCCR. The GCCR is funded in equal parts (a third each) by the German Federal Ministry of Health, the Ministry for Social Affairs, Labor, Health, and Demography of the federal state of Rhineland–Palatinate, and the health ministries of all 16 federal states. This publication forms part of the dissertation of Peter Scholz-Kreisel, who is funded by an initiative of the Federal Ministry of Education and Research, funding reference No 02NUK042A. 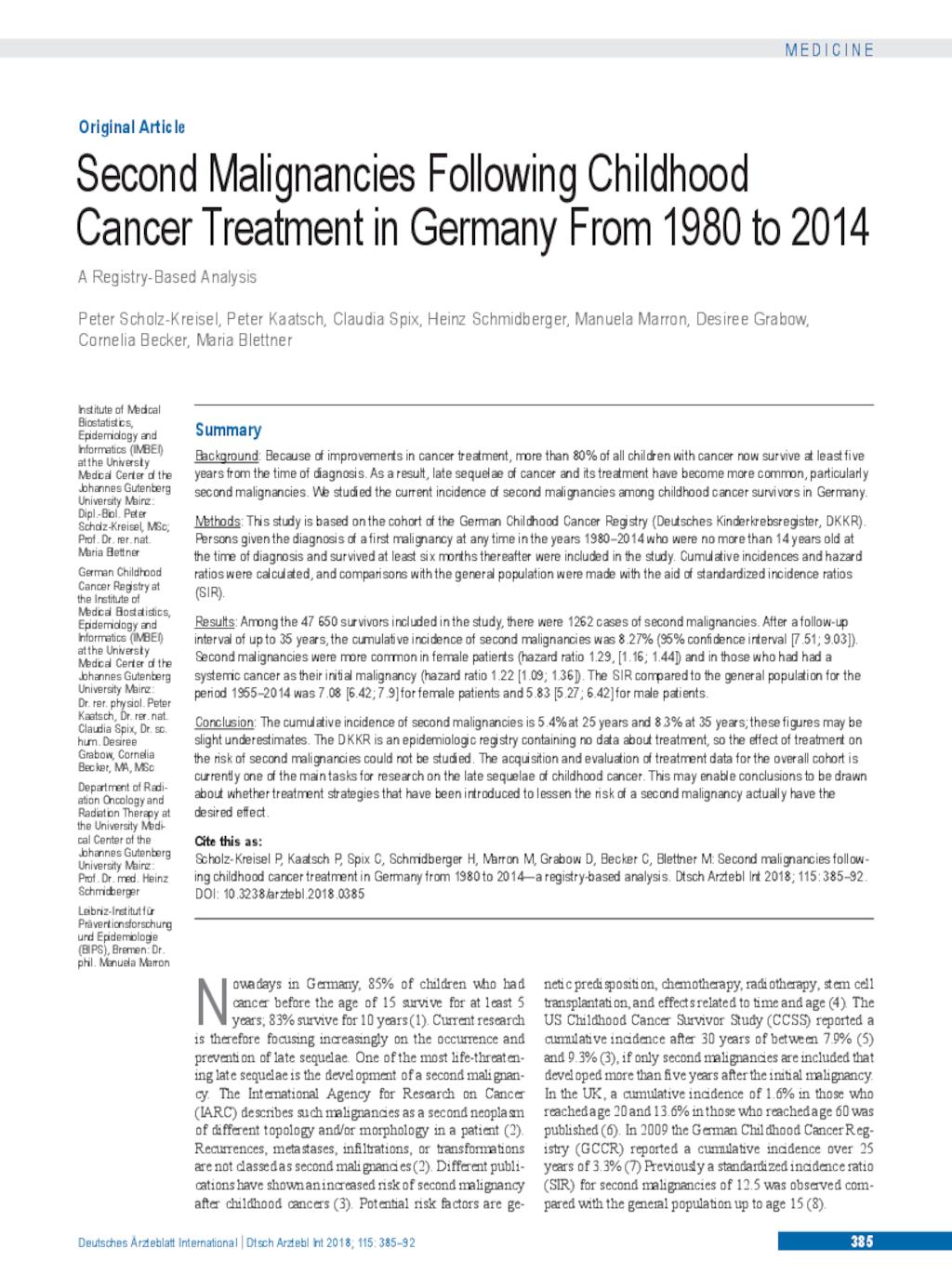