A Meta-Analysis and Systematic Review of Randomized Controlled Trials

Background: Abdominal obesity, an accumulation of fat in the abdominal region, is a risk factor for several non-communicable diseases. This review aims to identify non-surgical treatment options for abdominal obesity in adults. Interventions with behavioral, dietary, physical activity, or pharmaceutical components were compared to control conditions.

Methods: A systematic literature research for randomized controlled trials was conducted in Medline, Embase, and the Cochrane Central Register of Controlled Trials according to a prespecified and registered protocol (PROSPERO CRD42017057898).

Conclusion: Overall, the identified interventions showed a moderate effect on WC. One reason may be that in most studies WC was a secondary outcome parameter, while only a small number of interventions primarily targeted abdominal obesity. Further research regarding the treatment of abdominal obesity is urgently needed.

The World Health Organization (WHO) defines obesity as abnormal or excessive fat accumulation that may impair health (1). Furthermore, obesity is the visible sign of a metabolic disturbance caused by excessive intake of highly processed foods loaded with sugar of any kind and fat in an unhealthy ratio of omega 6 to omega 3 fatty acids (2). Thus, especially abdominal obesity (AO) is strongly linked to most of the non-communicable diseases (NCD) identified by the WHO to be the main types (3), in particular the following four:

The highest relative mortality risk was detected for the combination of low BMI with high waist circumference (WC) or waist-to-hip ratio (WHR) (8). Although not recognized by many physicians and even less patients (9), AO represents the high risk form of obesity (10). Hence, the identification of effective therapies for AO is of importance to counter the rise in prevalence of both AO and correlated NCDs.

There exist several measuring methods for assessing AO. The most conventional one is measuring WC and evaluating it in combination with sex-specific cutoffs, most widespread are 80cm for women and 94cm for men (11). A more recent measure is waist-to-height ratio which takes variations in height into account and offers one threshold (0.5) for all (12), yet some researchers propose to apply a threshold of 0.6 for the elderly.

The treatment of AO may help to improve public health and save resources. The influence of exercise on abdominal fat has already been systematically reviewed (15, 16), but no systematic review for lifestyle and pharmaceutical interventions could be found in relevant databases. Therefore, the aim of this systematic review is firstly to identify therapeutic options for AO and secondly to establish a basis for further research into specific therapies. The formula depicted in Table 1 was defined according to the “Participants, Interventions, Comparisons and Outcomes (PICO)” framework (17) 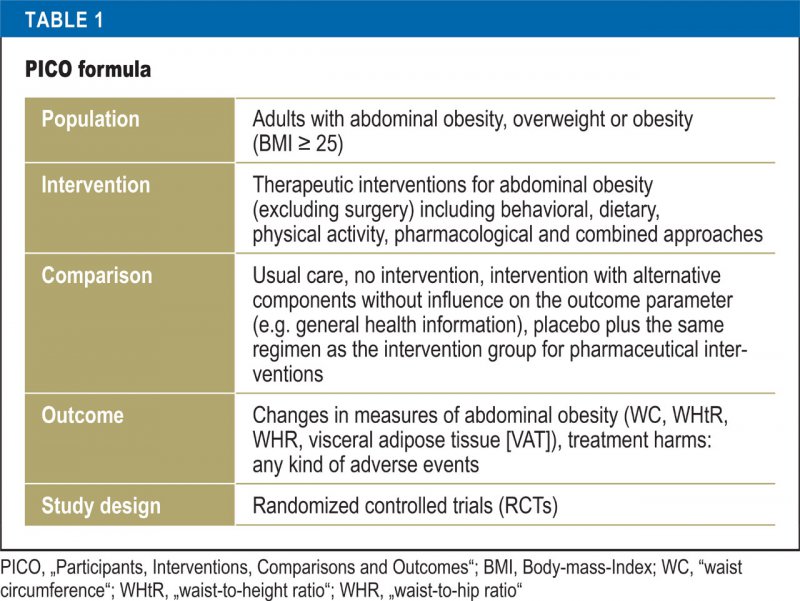 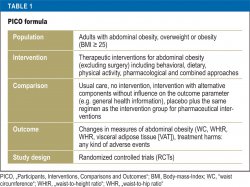 The protocol of this review was registered in advance at the International prospective register of systematic reviews PROSPERO (https://www.crd.york.ac.uk/PROSPERO/, registration number CRD42017057898).

Medline, Embase and the Cochrane Central Register of Controlled Trials (CENTRAL) were systematically searched for RCTs published between January 1990 and January 2017. The search strategy for Medline is illustrated in the eBox. This strategy was adapted for Embase and the CENTRAL. References were stored in the web-based reference management software package RefWorks (ProQuest LCC, Ann Arbor, MI, USA), and duplicates were eliminated program-controlled.

Two researchers (JE, DS) independently screened titles and abstracts of retrieved articles according to the prespecified inclusion and exclusion criteria as depicted in Table 2, and removed further duplicates. Discrepancies were solved by a third researcher (DK). The same procedure was applied when screening the full texts. 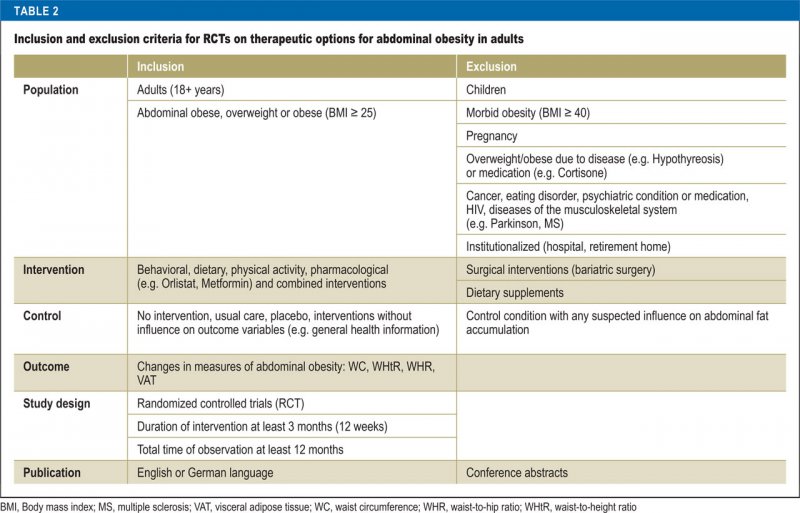 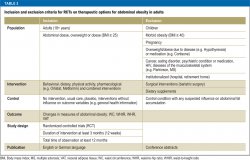 The data was extracted and sorted into predefined tables that had been developed as a team effort by all participating researchers. All entries were then checked by a second researcher. Extracted data included basic information on

Missing information was taken from study protocols or other publications that were referenced in the text, whenever possible. The principal outcome measure was the mean difference in longitudinal changes in WC between intervention and control group. Where possible, data from a 12 months observation period, independent of the length of the intervention, was used in the meta-analysis.

Risk of bias of the included RCTs was determined using the Cochrane Collaboration’s tool for assessing risk of bias (18). Again, two researchers independently evaluated the risk of bias and conflicts were solved in discussion with a third researcher. To evaluate a publication bias, a funnel plot was generated, and a rank correlation test for asymmetry conducted.

The meta-analysis was conducted applying the statistical software package R Release 3.2.3 for Windows (http://cran.r-project.org). Differences between intervention and control groups regarding changes in WC from baseline to a 12 month follow-up were analyzed. For multi-arm trials the number of controls was equally divided. For those studies reporting data for men and women, sex-specific analyses were conducted. Additionally, the magnitude of the correlation of weight loss in kilogram and reduction in WC was tested utilizing the Pearson correlation coefficient.

Random effect models were applied to account for differences between studies. Group size, length and type of intervention were tested in mixed effects meta-regression as moderator variables. Pooled mean differences were calculated based on raw mean differences in WC in centimeters and are reported as inverse-variance weighted averages with 95% confidence intervals (CI). To quantify heterogeneity the I2 statistic was calculated and Cochran’s Q-test was applied. Sensitivity analysis was performed by leaving out studies with extreme results.

The systematic search returned 2954 records from three medical databases. Within RefWorks 1477 citations were identified as non-duplicates and were subsequently screened applying the predefined inclusion/exclusion criteria. 262 articles were retrieved for the full text screening after which 19 articles remained, reporting 15 trials. Figure 1 shows the PRISMA flow diagram of study selection. 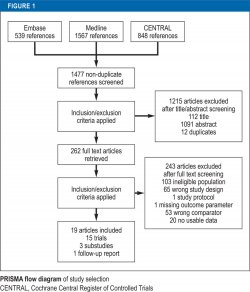 The number of study participants varied between 34 and 439 per study, in sum, 2918 datasets were included in the meta-analysis. The duration of intervention varied between three months and three years with a median duration of 12 months. Measurement data at 12 months were available from 13 studies. For one study, data were available from a 6 months measurement only, and for another study, we had to use data from a 3 year measurement. Seven studies reported baseline and follow-up values, eight studies reported follow-up change scores for intervention and control group. Most studies were conducted in a university hospital or a general practitioner setting. WC in centimeters was measured in all studies and was primary or secondary outcome in eight studies. More details are found in the eTable. 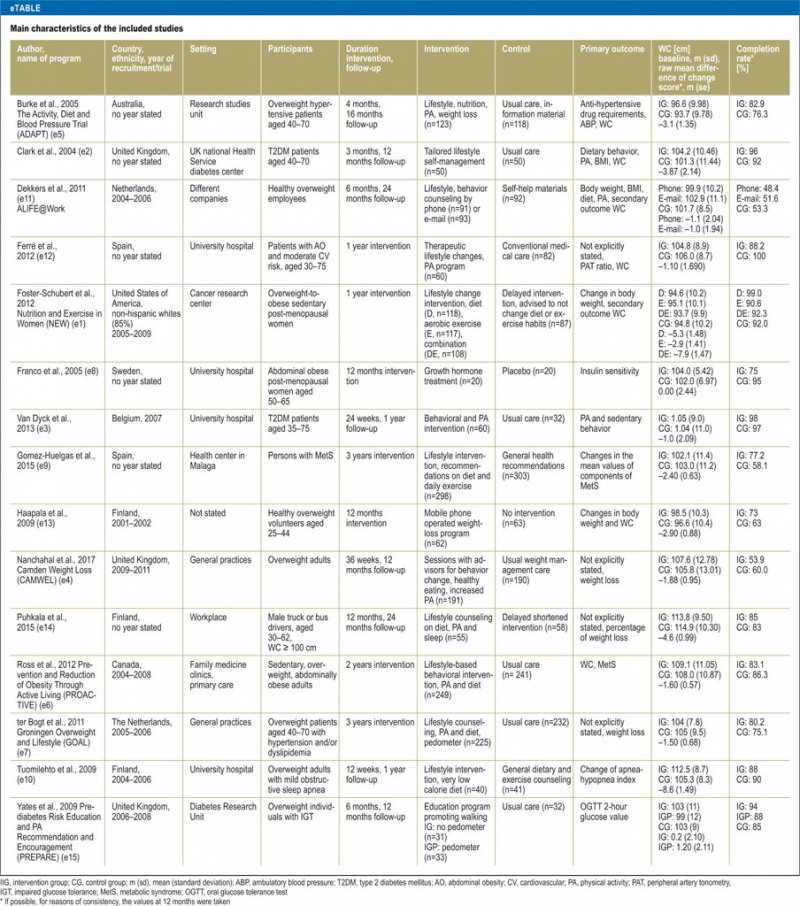 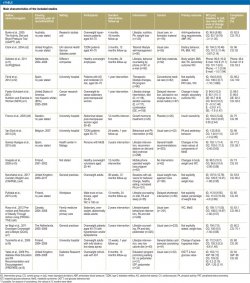 eTable
Main characteristics of the included studies
Enlarge All figures

Risk of bias and completion rates

Published study protocols, where available, were taken into account to assess the risk of bias. All studies were randomized but blinding of participants and personnel was only partly possible. Some studies reported significant baseline differences. Only one study reached an overall low risk of bias (e1), all others were at high risk or unclear risk. An overview of the risk of bias in individual studies is depicted in Figure 2. A funnel plot is illustrated in the eFigure. The rank correlation test showed no significant asymmetry (Kendall’s tau=0.123, p=0.489).

Figure 2
Overview of the risk of bias
Enlarge All figures 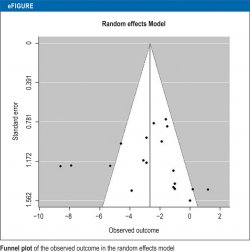 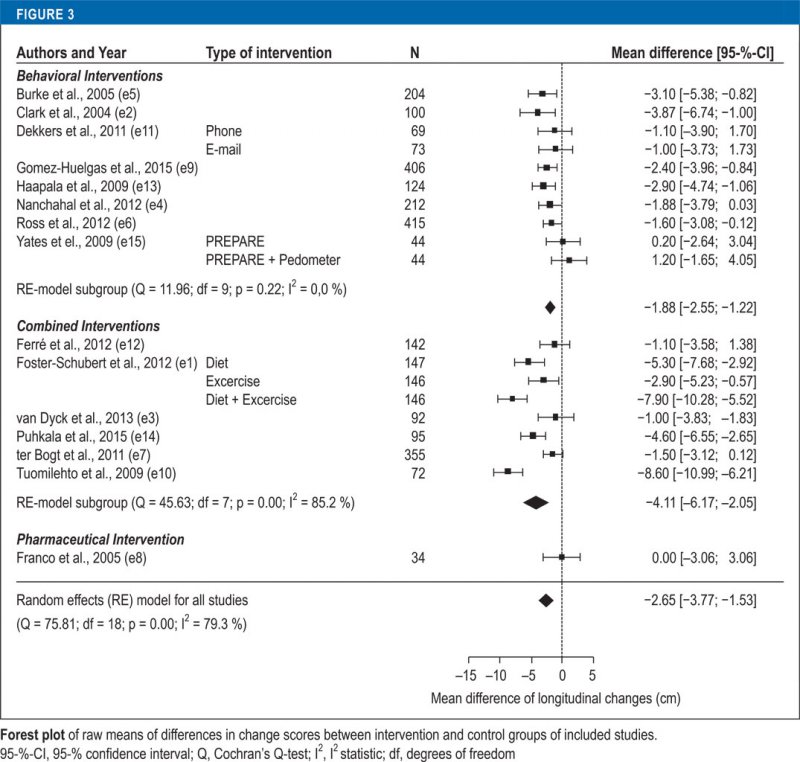 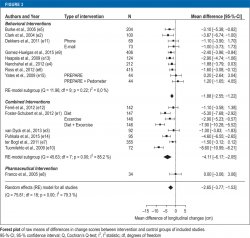 Only six studies provided information on adverse events. Clark et al. reported three deaths during the study period, one in the intervention and two in the control group (e2). The growth hormone intervention caused side effects related to fluid retention in mild to moderate severity (e8). Gomez-Huelgas et al. indicate that during three years of study duration 15 participants died and 7 were disabled, but there is no information given regarding their respective group (e9). Ross et al. reported numbers of musculoskeletal events during or after exercise and potential cardiovascular events without differences between intervention and usual care (e6). Ter Bogt et al. lost four participants in the intervention and six in the usual care group because of disease/death (e7). Tuomilehto et al. lost two intervention participants because of intolerance of the meal replacement products used in the weight reduction program (e10).

Initially, the conduction of a meta-analysis was not planned in the protocol because of considerable doubt that a consistent summary measure would be found, due to various possibilities of measuring and defining abdominal obesity (19). However, all included studies provided data on WC and therefore a meta-analysis was added. Results showed superiority for approaches combining behavioral counseling with either a diet or exercise program or both. Though, heterogeneity was considerable between combined interventions. The most successful intervention with regard to WC was a lifestyle intervention with a very low calorie diet (e10). The sole pharmaceutical intervention applying a growth hormone treatment did not show any changes in WC, but reported a reduction in visceral adipose tissue, measured with computed tomography scans (e8). This result also indicates a limitation of the use of WC as a proxy for visceral fat. Nonetheless, its use is strongly recommended and of vital importance for the estimation of cardiovascular risk (20).

The overall effect was only moderate with –2.65cm [–3.77; –1.53], representing a 2.5% reduction from a 102.7 cm average baseline value. However, the meta-regression confirmed the superiority of combined interventions over behavioral counseling alone. From six combined interventions four choose a physical activity (PA) component, one a very low calorie diet and one tested diet and PA separately as well as combined, with the combination showing the best result. Basically, continuing exercise training may help to maintain the results and prevent the regain of abdominal fat (21).

The overall effect was also small compared to a loss in WC of 4.4 cm which were associated with a 58% reduction in the incidence of type 2 diabetes mellitus (T2DM) in a prevention study (22). In obese Japanese men at least 3 cm reduction of WC was needed for improving metabolic syndrome (MetS) (23). One possible reason for the restricted effectiveness is that in most studies WC was a secondary outcome parameter, while only a small number of interventions primarily targeted abdominal obesity. The result of this review is also sobering in the light of the urgent need to prevent non-communicable diseases (NCD), the main cause of morbidity and mortality in the world (24).

WC is an obligatory part of the definition of the metabolic syndrome by the International Diabetes Federation (13) and the main determinant of elevated C-reactive protein in patients with metabolic syndrome (25). MetS itself is a cluster of risk factors of cardiovascular disease (CVD) with an estimated prevalence of 20–25% of the world’s adult population, bringing about a new CVD epidemic (13). The close relationship between MetS and T2DM is self-evident as well as the worldwide rise in the incidence and prevalence of both (13). Hence, the reduction of WC or even better, visceral adipose tissue, is a promising preventive measure for CVD, and T2DM, and possibly further NCDs. The American Heart Association criticizes that “WC measurements have not been well adopted in clinical practice” despite WC being “a simple and inexpensive tool for assessing body fat distribution” (26).

This review was, except for the meta-analysis, conducted according to a registered protocol and is, as far as applicable, reported following the PRISMA statement.

Results have to be treated with caution due to considerable heterogeneity and risk of bias in the included RCTs. Differences in components and contents, duration, intensity, completion rates and adherence to the intervention are among others causes of heterogeneity. The preference of complete-case-analysis over the intention-to-treat approach may also have influenced the results.

Presumably there is no sustainable intervention for AO but a permanent change of lifestyle habits with preventive ability for major NCDs, as proposed by several authors (2, 27, 28). Since losing weight is not obligatory to reduce abdominal fat (16, 29), new strategies that might even be better acceptable for patients need to be developed, easing the pressure of inevitable weight loss. Especially those with greater visceral fat mass might benefit from any intervention because visceral fat seems to be broken down preferentially compared to general body fat (30). More specific research in the treatment of abdominal obesity is urgently needed.

Figure 2
Overview of the risk of bias
Enlarge All figures 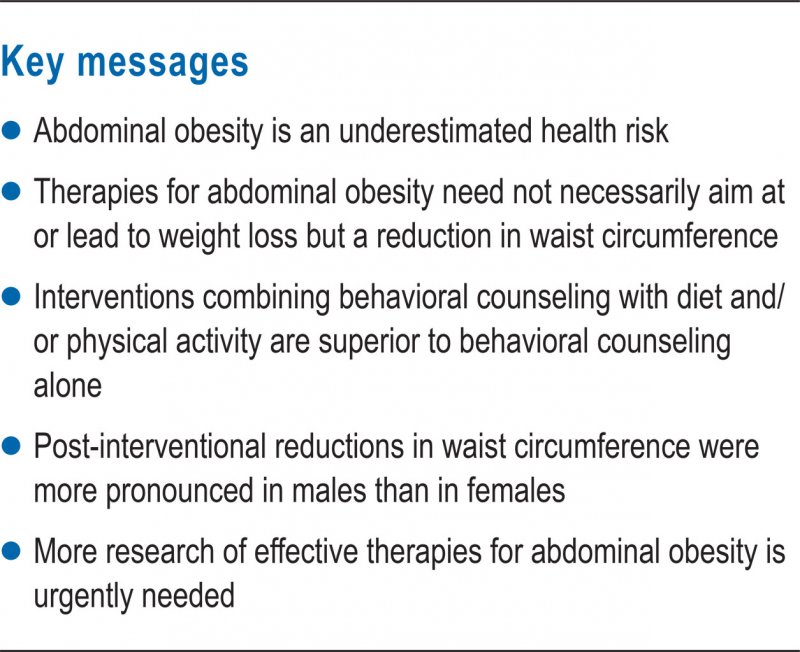 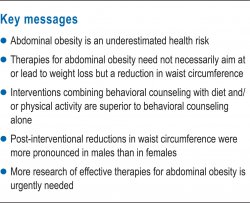 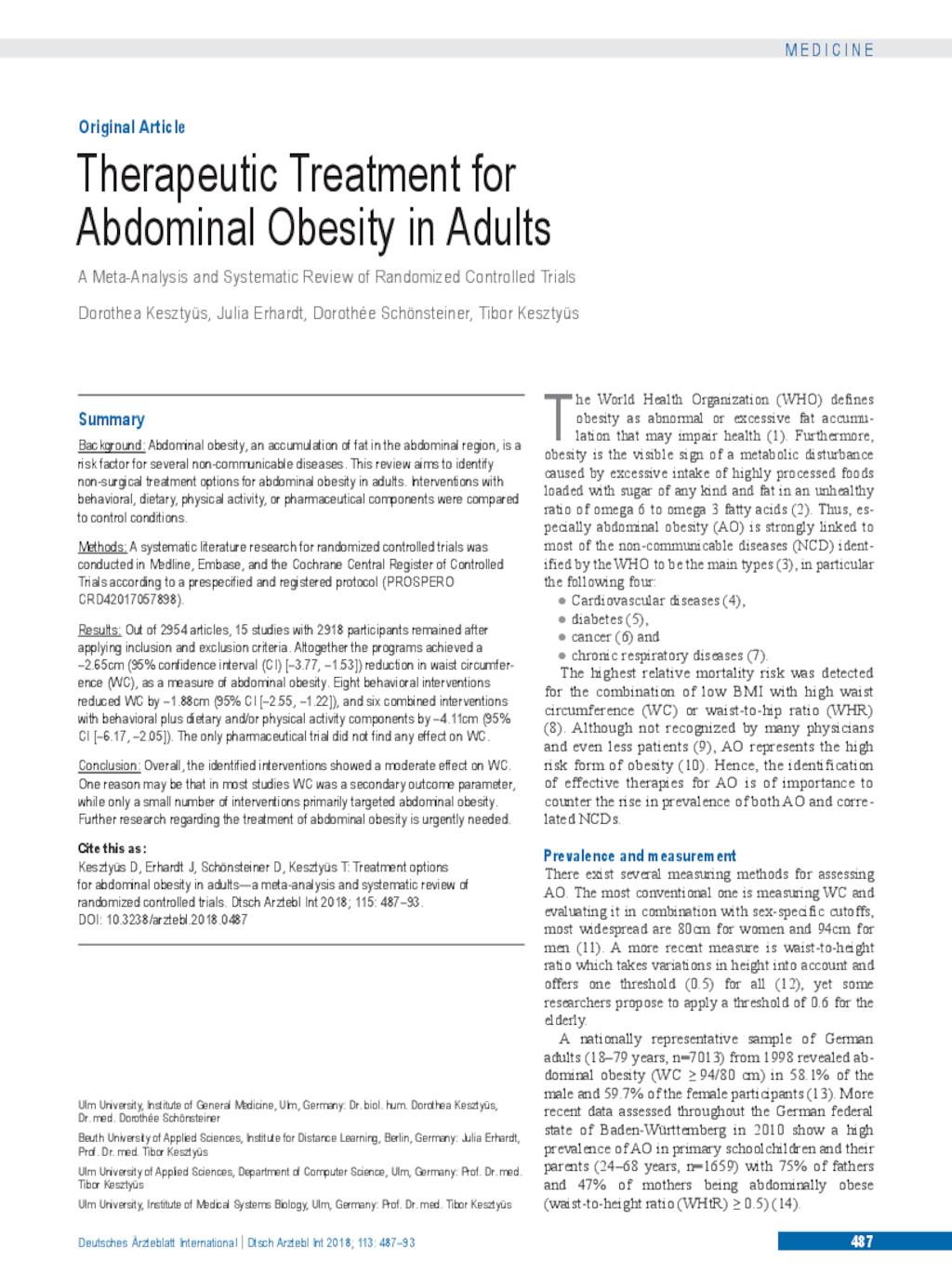