Gockel, I; Hoffmeister, A

Methods: This review is based on pertinent publications retrieved by a selective search in MEDLINE, PubMed, the Cochrane Library, and the International Standard Randomised Controlled Trial Number (ISRCTN) registry.

Results: New technologies such as narrow-band imaging have improved the endoscopic diagnosis and staging of early gastro-esophageal cancer. The development of endoscopic submucosal dissection has led to a higher R0 resection rate, a lower risk of recurrence, and an increase in the number of endoscopic resections that are performed with curative intent. In squamous-cell carcinoma of the esophagus, surgical oncological esophagectomy is indicated if the cancer infiltrates into the third mucosal layer (T1a, m3) or deeper. In esophageal adenocarcinoma, the prevalence of lymph node metastases is low if the cancer is restricted to the mucosa and increases only when the submucosa is infiltrated. In the current German S3 guideline, endoscopic resection is recommended for intramucosal adenocarcinoma as long as there are no further histopathological risk factors. Lymph node metastasis in gastric carcinoma begins in the deep mucosal infiltration stage (m3). If certain special conditions (“extended criteria”) are met, carcinoma expanding into the first submucosal layer (sm1) can be removed endoscopically. All further stages must be treated with total or subtotal gastrectomy with systematic D2 lymphadenectomy.

Conclusion: Borderline cases between endoscopic and surgical resection of early carcinoma of the esophagus or stomach must be managed with an interdisciplinary treatment algorithm. If there is a risk of lymph node metastasis, surgical oncological resection is indicated. Such resections of gastroesophageal cancer in the locally advanced stage should always be part of a multimodal treatment approach.

The Robert Koch Institute predicts that about 7400 persons (5700 men, 1700 women; incidence rising) will be diagnosed with esophageal cancer and about 14 700 (9100 men, 5600 women; incidence falling) with stomach cancer in Germany in 2018 (1). For many years surgical resection was the only curative treatment for malignancies of the esophagus and stomach, but endoscopic treatment of these cancers is becoming increasingly widespread. The seamless availability of diagnostic endoscopy in the industrialized nations means that malignant tumors are more often being detected at an early stage, rendering local endoscopic treatment technically feasible, provided the oncological situation permits. Two procedures—endoscopic mucosal resection and endoscopic submucosal resection (ESD)—have become established as techniques for removal of early-stage carcinomas. The complication rates of these procedures depend largely on the endoscopist’s experience. For this reason, their use should be restricted to specialized centers.

At the point where the perioperative risk associated with oncologic surgery outweighs the survival advantage, endoscopic tumor resection becomes not only technically feasible but also medically preferable.

Nevertheless, endoscopic resection is often merely a diagnostic procedure. This is particularly the case when histological analysis of the resected tissue shows a high likelihood of metastasis or when complete excision is not possible by endoscopic means. In such cases it is advisable to proceed to surgical resection in the same session. The patient must be informed of this possibility before commencement of endoscopy. Every instance of endoscopic removal of a malignant tumor from the gastrointestinal tract should be followed by interdisciplinary discussions involving pathologists, surgeons, and endoscopists (tumor board) to decide on how best to proceed (repeat endoscopic resection, surgery, follow-up protocol). A second endoscopic resection should take place only in the case of lateral R1 resection, and then only if all the criteria expounded below are met. In the event of deep R1 resection at the basal resection margin, surgical treatment must always follow.

Furthermore, this review sets out to delineate the indications for endoscopic versus surgical tumor resection and describe how borderline cases should be managed. Here too, the decision on the best treatment for a tumor is taken on an individual basis in full consideration of each patient’s specific circumstances. In a patient whose comorbidities greatly increase the risks involved in surgery, for instance, it may be advisable to adjust the boundaries between endoscopic and surgical treatment presented below, or to administer systemic treatment for an early-stage tumor.

Squamous cell carcinoma of the esophagus

Squamous cell carcinoma of the esophagus is completely different from adenocarcinoma with regard to etiopathogenesis, tumor biology, comorbidity, surgical risks, and prognosis (2, 3). The best-known risk factors are chronic alcohol consumption and smoking (3). Mucosal or submucosal esophageal cancer with or without lymph-node metastases (corresponding to Tis or T1 in the 2017 TNM classification of the Union internationale contre le cancer [UICC] [4]) is defined as superficial.

Before endoscopic treatment of a squamous cell carcinoma or its precursor, intraepithelial neoplasia, it is essential to determine how far the tumor has spread. This is a precondition for any attempt at curative treatment. Alongside the necessary systematic work-up, diagnostic endoscopy is needed to determine the precise size and extension of the esophageal lesion. Chromoendoscopy with Lugol solution is helpful in this regard (Figure 1). According to one systematic review and meta-analysis, endoscopy with narrow band imaging is also feasible and in fact superior to chromoendoscopy for differentiation from other mucosal lesions (5). Preinterventional endoscopic ultrasonography (EUS) has limitations at this stage of disease (6). EUS may underestimate the extent of early neoplasia, but should nevertheless be carried out to exclude more advanced disease.

Endoscopic resection of squamous cell carcinoma is recommended (8, 9) for m1 and m2 tumors less than 2 cm in size with differentiation grade G1/G2 and no invasion of blood or lymph vessels (L0, V0). Whether the resection takes the form of mucosal or submucosal dissection (Figures 2 and 3) depends on the size of the tumor and the expertise of the center.

To date there are no valid preinterventional diagnostic procedures (endosonography, computed tomography [CT], positron emission tomography/CT) that can be relied upon to identify potential lymph-node metastases of superficial esophageal cancer (mucosal and submucosal infiltration = pT1a, b) with sufficient accuracy.

Adenocarcinoma of the esophagus

The technique for endoscopic treatment of esophageal adenocarcinoma largely corresponds to that for squamous cell carcinoma. Chromoendoscopy with acetic acid is used to assess tumor spread (Figure 4). The risk of lymph node metastases is greater if the tumor extends to the submucosa (26). Endoscopic resection proceeds according to the criteria shown in the Box (9).

The decision whether to opt for endoscopic resection followed by monitoring or proceed immediately to surgical management is not always clear-cut. In surgical specimens of surgically resected superficial Barrett’s adenocarcinoma the boundary between absence and presence of lymphogenic metastasis has been reported to lie between m4 (carcinoma infiltration of the original muscularis mucosae) and sm1, although the borderline for detectable lymph node metastases between these two layers is certainly not sharply defined (36). This is just as true for the distinction between sm1 low risk (good differentiation, L0, V0) and sm1 high risk (poor differentiation, L1, V1). The individual patient’s risk profile with regard to a two-cavity intervention is thus crucial in determining the indications. Problems are also caused by the difficulty of distinguishing between mucosal and submucosal or low-risk and high-risk sm1 Barrett’s adenocarcinomas by means of endosonography or other imaging modalities, so that “diagnostic endoscopic resection” is often the best choice.

In our own efforts to establish a model for prediction, we found that the predictors of lymphogenic metastasis were ranked as follows: grade 3 differentiation; sm3 infiltration; lymphovascular (L1) and microvascular (V1) infiltration; sm2 and sm1 infiltration (37). The risk of lymph-node metastases and lymphovascular invasion increases with tumor infiltration into deeper submucosal layers (14, 38, 39).

Gastric carcinoma is among the five most commonly occurring cancers in both men and women in Europe (40), and ranks equally highly for mortality (40). In international comparisons of age-standardized incidence and mortality, German men rank second and German women fifth (1).

For stomach cancer, lymph-node metastasis begins with infiltration of the deep mucosal layer, m3 (e6), where the risk of spread to the lymph nodes has been stated as 13% (e6). In the case of the extended indications for endoscopic submucosal dissection, the cut-off point is infiltration of the submucosa to a depth of no more than 300 µm (e7). All other submucosal stages (sm1 and Laurén diffuse type, tumor diameter ≥ 3 cm; sm2, Laurén intestinal and diffuse type, any diameter; and all sm3 tumors) necessitate oncological gastrectomy with systematic D2 lymphadenectomy (e3). The proximal safety margin—in accordance with the German S3 guideline on stomach cancer—should be 5 cm for Laurén intestinal type tumors and 8 cm for the diffuse type (e3, e8).

The overall risk of lymphogenic metastasis in the presence of submucosal tumor infiltration is reported as circa 25% (e10). The likelihood of lymph-node metastases is not necessarily correlated with the depth of infiltration.

Problems arise when the endoscopic resection is piecemeal rather than en-bloc. It is then harder to assess whether R0 resection has been achieved. Piecemeal resection increases the risk of local recurrence, the reported rate of which ranges from 2% to 35% (e11). Recurrences after endoscopic submucosal dissection must be distinguished from synchronic and metachronic lesions.

Submucosal stomach cancer in a high-risk surgical candidate can, as a “compromise,” be treated with laparoendoscopic (full-thickness wall) resection (e12). On oncological criteria this seems to represent a useful, low-risk option.

Conflict of interest statement
Prof. Hoffmeister has received payments for lectures and the preparation of scientific meetings from the Falk Foundation.

Prof. Gockel has received payments for lectures from the Falk Foundation. 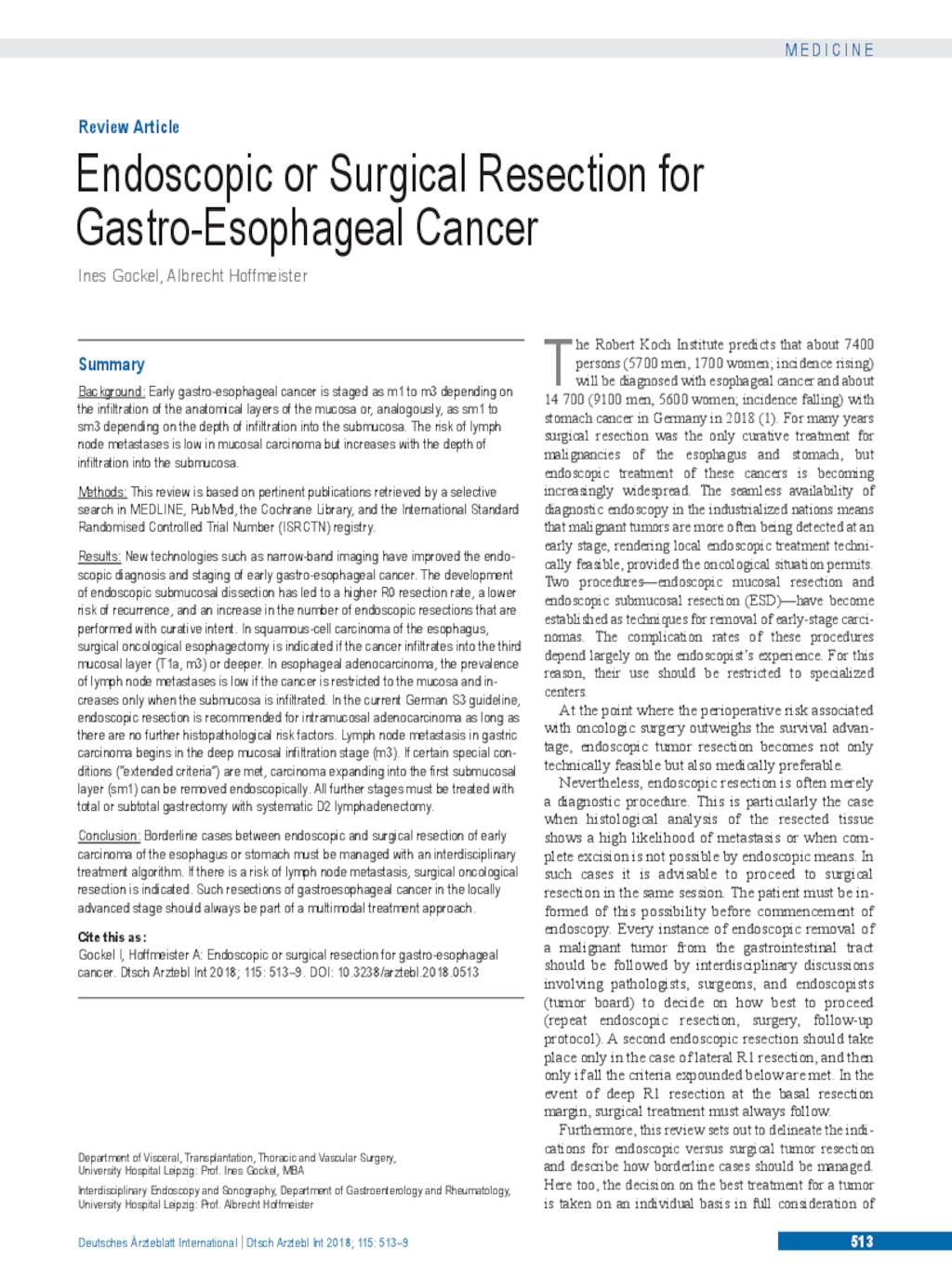