The Burden of Cancer in Germany

It has long been known that many cancers are attributable to modifiable risk factors such as smoking, unhealthy diet, or infection. As early as 1967, the Englishman Sir Richard Doll published a book dealing exclusively with risk factors of this kind and with cancer prevention. According to Doll, around 40% of cancer deaths in men and 10% of those in women are due to risk factors that can be modified (1).

For Germany, the number of cancer cases triggered by modifiable factors is unknown. The answer is of immediate public health interest, because these tumors—at least theoretically—are avoidable.

A working group around Professor Hermann Brenner of the German Cancer Research Center (Deutsches Krebsforschungszentrum) in Heidelberg has now looked into this question and presents a series of three articles investigating the most important modifiable risk factors for cancer (2–4). The authors use the concept of population-attributable fraction (PAF) for risk factors (5). The PAF is calculated from the relationship between the cases of a disease that can be attributed to the risk factor and all cases of that disease in the population. A PAF of 100% would indicate that all cases of a disease in a given population are caused by that risk factor.

The PAF basically depends on the number of risk-exposed people in the population, the extent to which the risk of the target disease is increased by the risk factor, and the incidence of the disease in the population. The authors used data from the literature on the most important modifiable risk factors and the cancers associated with them to determine the relevant PAFs, and from that the number of avoidable cases of cancer.

This work provides for the first time a set of systematically calculated figures for the epidemiologically most significant cancers and their risk factors for Germany. These figures show that, of the 440 000 new cases of cancer that occur every year in the 35- to 84-year-old age group, 165 000 (37.4%) are attributable to the investigated risk factors. That is, out of every five cases of cancer, two could be prevented.

At first sight, the PAF of 37.4% for all risk factors and cancers together looks lower than one might expect, given that considerably higher values are reported for the United Kingdom (42.7%) (6) and the USA (42.0%) (7). However, for both these countries additional factors such as “UV radiation of any origin” were included. This suggests that the number of avoidable cancer cases in Germany must be even higher than described.

In regard to prevention, the figures need to be interpreted with caution. They describe the maximum potential prevention that could be achieved assuming that the risk factor concerned can be completely eliminated (or reduced below a threshold value). How far that is possible, realistic, or desirable needs to be considered for each factor individually.

How realistic is it to be looking at a smoking rate of 0%, complete abstinence from sausages and processed meat products, or a normal body mass index for the whole population? Questions like this were asked as early as 1937 by Hugo Ahlbom, who identified tobacco, alcohol, and poor diet as risk factors for cancer (8). He called for a consistent fight against excessive consumption of tobacco and alcohol and for improved diet, writing: “The conclusions to be drawn for cancer prevention are for the most part obvious. […] All this is nothing new, but the importance of the program is not as widely recognized as it should be.” Later he described his suggestions about prevention as “somewhat utopian.”

In terms of cancer prevention, we have no doubt made great strides in the past 80 years, but the parallels to the past are crystal clear. The risk factors listed by Ahlbom continue to cause the majority of avoidable cancer cases, the value attached to primary prevention is still low, and the goal of zero exposure remains utopian.

Nevertheless, the statistics presented in these papers ought to constitute more than just a thought experiment. Quantifying the number of avoidable cancer cases could help both public health policy and the general population to set priorities. For example: tobacco consumption, with an overall PAF for cancer of just under 20%, is still the most important modifiable risk factor in Germany. Although the prevalence of smoking has shown a positive trend throughout Europe in recent years, the prevalence in Germany is still in the upper middle part of the range (9). In the face of these statistics, there is an urgent need for tobacco control measures to be intensified, including a complete ban on the advertising of tobacco products. This is the more important because smoking causes other diseases that are no less important than cancer.

There is, however, yet another element uncovered by this group of articles by Brenner et al. (2–4). The majority of incident cancer cases cannot be reached by primary prevention, because the risk factors are at present unknown or are not (yet) modifiable. In respect of the most common cancer types, such as breast and prostate cancer, the scope for primary prevention estimated on the basis of these publications is less than 10% to 20%. Even for colon cancer, the second most common cancer in Germany, about half of all cases are not preventable in our current state of knowledge.

For these cancers, evidence-based early diagnosis has a decisive role to play in the population-based reduction of morbidity and mortality.

Finally: The question as to whether and to what extent avoidance of risk factors will affect cancer deaths in Germany remains unanswered. However, a study from the USA gives grounds for optimism. Primary prevention would lead to an even greater drop in cancer deaths than in the incidence of cancer (7, 10).

We must hope that statistics like these will further heighten political and public awareness of prevention, so that the future burden of cancer in Germany may be brought down as low as possible. 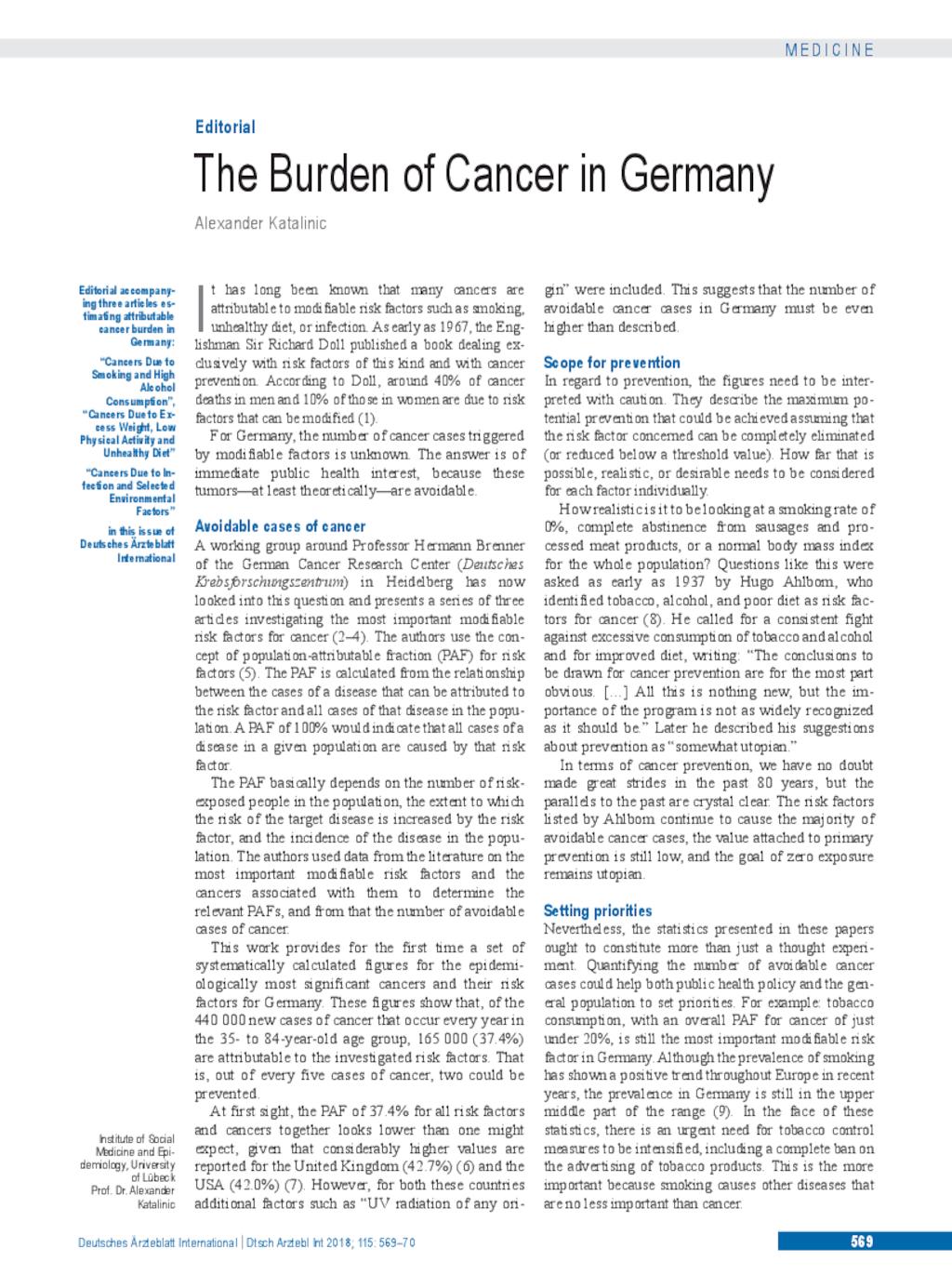