Cancers Due to Smoking and High Alcohol Consumption

Estimation of the attributable cancer burden in Germany

Methods: Numbers and proportions (population-attributable fractions, PAF) were calculated by sex and age group for ages 35 to 84 years based on population projections, national cancer incidence and exposure data, and published relative risks.

Results: For the year 2018 we estimated the smoking-attributable cancer burden to be 85 072 cases (men 58 760, women 26 312), corresponding to 19% of all incident cancers. The highest PAF was seen for lung cancer: 89% of male and 83% of female lung cancer cases are attributable to smoking. The cancer burden attributable to high alcohol consumption was estimated to be 9588 (men 8117, women 1471) cases (2% of all incident cancers). The highest PAF were observed for cancer of the oral cavity and pharynx (men 34%, women 6%) and squamous cell carcinoma of the esophagus (men 30%; women 5%).

Conclusions: A considerable proportion of cancer cases are attributable to smoking and high alcohol consumption. More rigorous prevention efforts are required to achieve significant reductions in the prevalence of these risk factors and the attributable cancer burden.

Health authorities in the USA recognized smoking as a cause of lung cancer and laryngeal cancer as early as in 1964. Since then, evidence of a causal link between smoking and several other cancer sites has accumulated, and today smoking is known as the leading avoidable cancer risk factor, causally associated with 12 different types of cancer (1).

Alcohol consumption was first concluded to be carcinogenic to humans by the International Agency for Research on Cancer (IARC) in 1988 (2). According to the Continuous Update Project (CUP) of the World Cancer Research Fund (WCRF), alcohol consumption increases the risk for six types of cancer (3).

Our aim in carrying out this study was to provide projections of the cancer burden attributable to the risk factors smoking and high alcohol consumption in Germany for the year 2018. Due to a lack of epidemiological data on the role of lifestyle cancer risk factors at young and very old ages, we restricted our estimates to the age range of 35 to 84 years.

Estimation of the smoking-attributable cancer burden

The strong association between smoking and lung cancer allows estimating the smoking-attributable fraction of lung cancer by means of an established indirect method (6), without having to make assumptions about latency periods. This method requires knowledge of lung cancer rates in never smokers and of relative risks (RR) of cancers causally linked to smoking, for smokers compared to never smokers. Such data were not available for Germany, so we used published pooled data from large contemporary cohorts provided by the American Cancer Society for the period 2000 to 2010: age- and sex-specific lung cancer mortality rates per 100 000 persons were reported by Thun et al. (14), and multivariably adjusted age- and sex-specific relative mortality risks for lung cancer and other smoking-caused cancers combined, derived from the same cohorts, were published in a recent report by US health authorities (1).

By applying the age- and sex-specific lung cancer rates in never smokers to the age- and sex-specific population projections for Germany for the year 2018, we calculated the number of cancer cases that would be expected in the absence of smoking as a risk factor. The number of lung cancer cases attributable to smoking was then calculated by subtracting these cases from the overall number projected for 2018. For other cancers caused by smoking, data on rates among never smokers were not available, so we used the commonly applied Levin’s formula for the calculation of population-attributable fractions (PAF) (5):

where is the proportion of the population at exposure level (here: prevalence of ever smokers) and is the excess relative risk associated with exposure level calculated as (RR –1). Here, we used not the observed smoking prevalence from a population survey, but rather a notional (theoretical) prevalence of ever smoking in the German population that was derived by inserting the calculated attributable fractions of lung cancer and the relative risks for lung cancer in smokers in the above formula and solving it for separately for each sex and age group. This notional prevalence can be regarded as the ever smoking prevalence that would be necessary in the German population to produce the cancer incidence in 2018 if the relative risks of the American cohorts pertained (15).

Estimation of the alcohol-attributable cancer burden

To provide estimates of cancer cases caused by excess alcohol intake, PAF were calculated considering cancers determined as causally related to consumption of alcohol by the IARC (16). Data on the prevalence of alcohol consumption in Germany were obtained from the German Health Interview and Examination Survey for Adults for the period 2008 to 2011 (DEGS1 2008–2011) (17).

RR estimates concerning the association between alcohol consumption and site-specific cancer incidence were taken from meta-analyses of cohort studies, conducted by the WCRF, when available. The mean amount of pure alcohol consumed in grams per day (g/d) by those who stayed within the recommended limits was defined as the optimum exposure level.

As in similar previous studies, we assumed a 10-year latency period between exposure and cancer incidence. By applying the age- and sex-specific PAF to the projected cancer incidences for Germany for the year 2018, we calculated the number of cancer cases that would be expected if individuals with alcohol consumption above recommended limits reduced their alcohol intake to the levels of those who adhere to recommended limits.

Methods of sensitivity analyses are described in eSupplement C.

Table 2
Prevalence of alcohol consumption below and above recommended limits according to the DEGS1 survey (2008–2011): mean pure alcohol intake in grams per day among men and women aged 25–74 years
Enlarge All figures

The greatest PAF for alcohol consumption were estimated for cancer of the oral cavity and pharynx (men 34%, women 6%) and squamous cell carcinoma of the esophagus (men 30%, women 5%). The attributable cancer burden was greater among men than women, with much higher PAF for all cancer sites. Overall, PAF ranged from 8% to 34% in men and from 1% to 6% in women, which in sum translated to 9588 cancer cases (men 8177, women 1471), corresponding to 2.2% (men 3.4%, women 0.7%) of all cancer cases (eTables 8 and 9). The cancer sites contributing most to this excess were cancer of the oral cavity and pharynx in men, with 3191 cancer cases, and breast cancer in women, with 870 cases.

Sensitivity analyses using the 95% confidence limits of risk estimates on the association of alcohol and cancer indicated a potential range of 7000 to 12 300 cancer cases attributable to alcohol (eTable 10).

Tobacco smoke is a complex mixture of more than 5000 chemicals, including carcinogenic substances, with no risk-free level of exposure (20). The health consequences of the cumulative exposure to carcinogens of tobacco smoke are enormous, p articularly for the lung but also for other organs (1). Our estimations of the smoking-attributable cancer burden are based on expected cancer incidence in the complete absence of smoking. It is, however, important to keep in mind that even if smoking were eliminated today, it would take decades until no further cancer caused by smoking occurred. Former smokers still have an increased risk of cancer, even though the excess risk declines with increasing time since smoking cessation (21).

The total number of smoking-attributable cancer cases was estimated to be more than twice as high in men than in women, which mostly reflects the higher prevalence of smoking among men, especially in recent decades (22, 23). Our results are quite consistent with a previous study for Germany, which estimated 72 208 cancer cases to be attributable to smoking in 2008; 55 057 cases in men and 17 151 cases in women. Our estimates are slightly higher for men (58 760 vs. 55 057), and markedly higher for women (26 312 vs. 17 151) (24). This might be due to our use of more recent risk estimates, as sex differences in relative risks of smoking have been decreasing over time and are now rather negligible (14).

We found that overall, 19% of cancer cases are attributable to smoking, which is substantially higher than comparable estimates for England (14.7%, [10]) or Australia (13.4%, [11]), two countries that have achieved strong declines in smoking in recent years through comprehensive tobacco control strategies (25, 26).

For Germany, a modeling study demonstrated that significant reductions in smoking prevalence and the attributable disease burden could be achieved by strengthening tobacco control policies in line with recommendations of the World Health Organization, such as raising taxes, banning tobacco advertising, and enhancing cessation support (27).

The major constituent of alcoholic beverages, ethanol, and its metabolite acetaldehyde have been classified as carcinogenic to humans (28). While there are more cancer sites causally associated with alcohol consumption in women, the total number of alcohol-attributable cancer cases was estimated to be more than five times higher in men than in women. In addition to a higher prevalence of alcohol consumption above the recommended limits among men, the greater average amount of alcohol consumed by men in each age group contributes to this inequality.

Overall, our projections of cancer site-specific PAF and corresponding excess cases are lower than those from a previous study (30), which estimated that approximately 8700 cancer cases among men and 4900 cases among women were attributable to alcohol in Germany in 2010. Our lower estimates can be explained by the fact that we did not consider the cancer burden due to light drinking and used more recent risk estimates from prospective studies.

A study estimating the alcohol-attributable burden of cancer incidence in eight European countries found that PAF varied across countries because of differences in alcohol exposure (31). Results from modeling studies demonstrate that alcohol consumption could be influenced by public health policies and interventions such as pricing and taxation (32).

We provide up-to-date estimates of the cancer burden attributable to smoking and alcohol consumption in Germany, based on the latest relative risk estimates from cohort studies as well as the most recent population projections and cancer registry data. Sensitivity analyses revealed substantial numbers of attributable cancer cases across all scenarios in a comparable range.

Due to a lack of up-to-date risk estimates from prospective cohort studies, we did not consider synergistic interactions between smoking and alcohol consumption, although there is some evidence of such an effect for head and neck cancer (33). For the estimation of the smoking-attributable cancer burden we had to rely on lung cancer rates in never smokers and relative risk estimates from a US population. We also had to use relative risk estimates for cancer mortality from the same population, but these tend to be similar to those for cancer incidence (21).

Furthermore, with respect to the estimation of the alcohol-attributable cancer burden, PAF depend on the reliability of self-reported alcohol drinking and the definition of exposure categories. Potential changes in prevalence of smoking or alcohol consumption over the past 10 years in the considered age groups should be small and therefore not affect our estimates substantially.

When calculating PAF, we restricted our estimates to cancer types with currently sufficient or convincing evidence as stated by pertinent authorities, but new evidence might confirm other causal links in the future. For example, there is evidence that the risk of gastric cancer is associated with increased alcohol consumption, but this association was observed only for high alcohol intakes (≥45 g/d) (34). A causal association between smoking and breast cancer has also been postulated (35). Given these limitations, our PAF and cancer burden projections are likely to be underestimates and can thus be considered conservative.

Of around 440 000 cancer cases to be expected in Germany in 2018, approximately 85 000 and 9500 cases are estimated to be attributable to smoking and alcohol consumption, respectively, corresponding to 19% and 2% of all cancer cases. Given the still significant prevalence of smoking and alcohol consumption in this country, there is huge potential for cancer prevention by intensifying efforts to reduce smoking rates and alcohol use.

Two other articles in this issue of Deutsches Ärzteblatt International present the topics “Cancers Due to Infection and Selected Environmental Factors” and “Cancers Due to Excess Weight, Low Physical Activity and Unhealthy Diet”, respectively (36, 37). 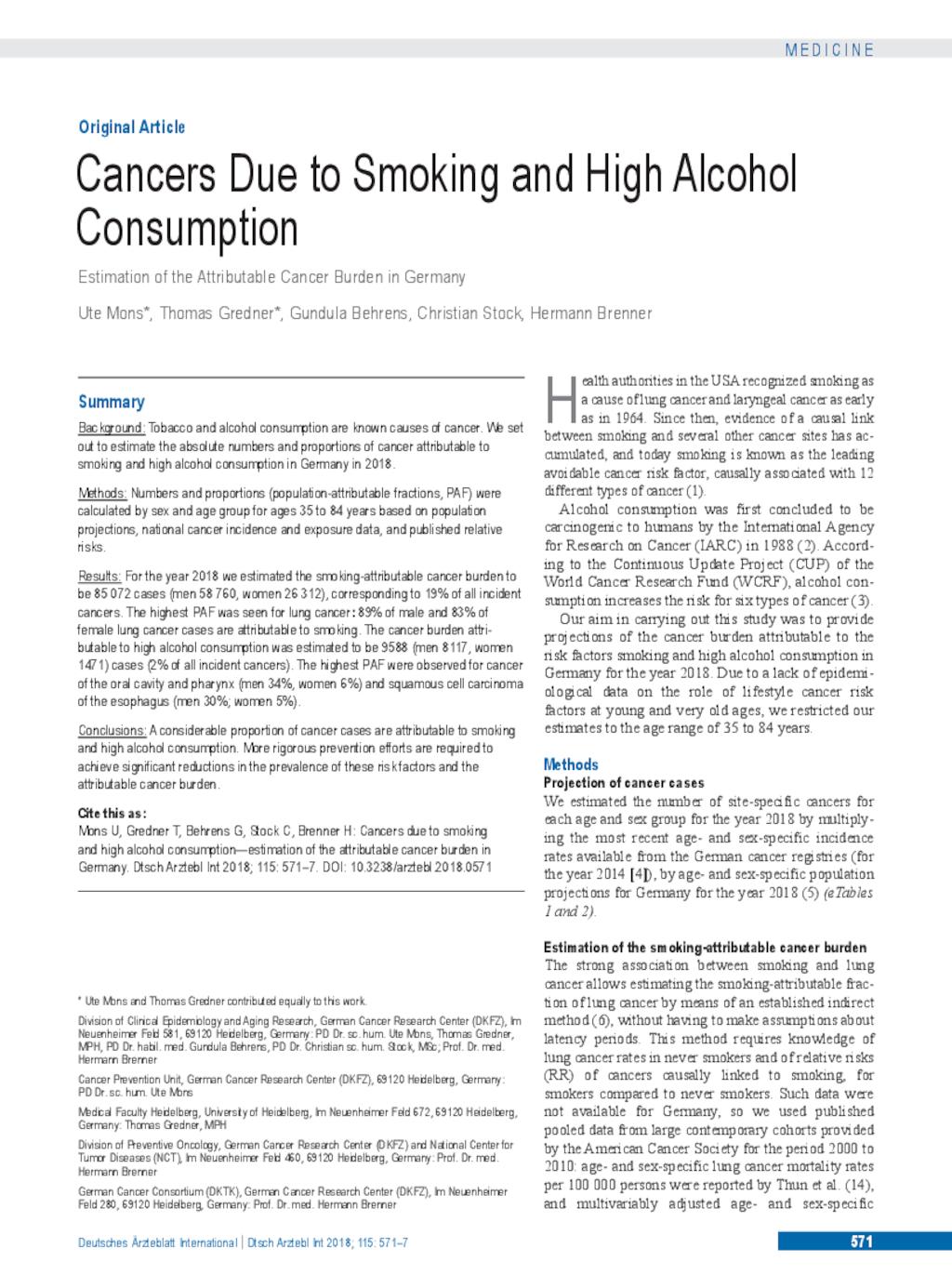