Cancers Due to Infection and Selected Environmental Factors

Estimation of the attributable cancer burden in Germany

Background: Causal relationships with the occurrence of cancer have been established for a number of infections and environmental risk factors.

Methods: Numbers and proportions (population-attributable fractions, PAF) of cancer cases attributable to these factors in Germany were calculated by sex and age groups for ages 35 to 84 years based on population projections, national cancer incidence, exposure data, and published risk estimates.

Conclusion: Of all cancers expected in 2018 in Germany, at least 5% are attributable to potentially avoidable infections and environmental factors. Further research should be directed towards more comprehensive identification and quantification of environmental risks as a basis for targeted cancer prevention.

In a broad sense, people are exposed to a wide range of carcinogenic agents from different sources in their environment. A causal relationship with the occurrence of cancer has been established between exposure to numerous infections and environmental factors (1, 2). This study provides estimates of the burden of incident cancer cases attributable to infections (Helicobacter pylori, human papillomavirus, hepatitis B, hepatitis C, human immunodeficiency virus, human herpesvirus 8) and major environmental factors (secondhand smoke, indoor radon, particulate matter, sunbed use) in Germany in 2018.

As described in Mons et al. in this issue, we calculated PAF by sex and age groups for ages 35 to 84 years combining the prevalence of exposure and the cancer site–specific relative risk (RR). For infection with human papillomavirus, PAF estimates are based on the proportion of tumors in which viral DNA was prevalent. To estimate the number of cancer cases attributable to each risk factor, we multiplied the PAFs by the projected cancer incidence for the year 2018 (eTables 1–3). The methods are reported in detail in the supplement to this article (eSupplement A and B).

Figure 1
Estimated number and proportion of site-specific incident cancer cases attributable to infections among men and women aged 35 to 84 years in Germany for the year 2018.
Enlarge All figures

In order to estimate the PAF for infection with HPV, the prevalence of viral DNA in tumor material is sufficient to infer that HPV caused the cancer (5). The PAF for malignancies of the oral cavity or oropharynx were estimated using the combination of positivity for HPV-DNA and for either E6*I mRNA expression or p16INK4a (6). For cancers of the anus (7), vulva (8), vagina (9), and penis (10), the PAF were derived from HPV-DNA prevalence in invasive cancers. For cancer of the cervix uteri all cases were assumed to be attributable to HPV (11) (Table).

Assuming that combined infection by both HBV and HCV is very rare, and assuming a latency period of 10 years between ascertainment of infection status and cancer diagnosis, we used seroprevalence from the nationally representative German Health Interview and Examination Survey for Adults for the period 2008 to 2011 (DEGS1) (12). In the process, seropositivity for HBsAG and the prevalence of HCV antibodies were used as indicators for chronic infection with HBV or HCV (eTable 4). We used the relative risks for hepatocellular carcinoma reported in a meta-analysis of HBV and HCV mono-infection comprising studies from low-endemic countries (13). Summary relative risks for non-Hodgkin lymphoma associated with HCV were taken from a meta-analysis of epidemiological studies (14) (eFigure 1).

Assuming a latency period of 10 years between SHS exposure and cancer incidence, we used prevalence of self-reported exposure to SHS at home, at the workplace, and in leisure time from DEGS1 2008–2011 (12) (eTable 5). A meta-analysis of the relative risk of lung cancer due to SHS among never smokers provided a lung cancer risk associated with workplace exposure (17), which we assumed to apply to home and leisure time exposure as well (eFigure 2). The estimated numbers of lung cancers occurring among never smokers were taken from the study by Mons et al. in this issue.

Figure 2
Estimated number and proportion of site-specific incident cancer cases attributable to selected environmental factors among men and women aged 35 to 84 years in Germany for the year 2018.
Enlarge All figures

For exposure to indoor radon, the mean annual indoor radon concentration for Germany was used (18, 19). Concentrations below the estimated outdoor air concentration were not considered for the calculation of attributable cases (eSupplement C). The results from a collaborative analysis of individual data from 13 European studies (20) showed a linear dose–response association between radon exposure and lung cancer risk without a threshold below which an exposure would carry no risk (eFigure 2). As most of the radon-induced cancer cases arise from a synergistic effect of radon and smoking (21), we also estimated the attributable cancer cases caused by indoor radon exposure combined with smoking (eSupplement A).

The proportions of the population at different PM exposure levels for the years 2007–2011 were obtained from the Federal Environmental Agency (22). Based on these, we calculated the mean prevalence of the population exposed to PM10 concentrations (particles with aerodynamic diameter ≤ 10 μm) exceeding the WHO mean annual guideline value (>20 μg/m3) and the corresponding population-weighted mean PM10-concentrations. We defined the excess exposure level by the difference between the mean exposure in those exceeding the guideline value and those who are within the limit (eSupplement A, eTable 6). Risk estimates were taken from a meta-analysis of nine studies examining the risk for lung cancer associated with particulate matter (23) (eFigure 2).

Sunbeds are a source of artificial ultraviolet (UV) radiation. Assuming a latency period of 10 years between sunbed use and cancer incidence, we used lifetime prevalence from a representative population-based telephone survey from 2007 (24) (eTables 7, 8). We used risk estimates from a meta-analysis of sunbed use and risk of developing malignant melanoma (25) (eFigure 2).

The methods used for sensitivity analyses are described in eSupplement D.

Sensitivity analyses using the 95% confidence limits of risk estimates and of HPV prevalences respectively indicated a potential range of 16 000 to 18 800 cancer cases attributable to infections (eTables 12–13).

After subtraction of the mean radon outdoor air concentration, the mean annual excess indoor radon concentration was 40 Bq/m³ for Germany. A total of 3185 (6%) lung cancer cases were estimated to be attributable to residential radon (men 2071, women 1114), of which 425 cases (1%) were estimated to be caused by radon alone and 2760 cases (5%) by the combination of smoking and radon (Figure 2, eTable 15).

According to the data of the Federal Environmental Agency, 23% of the German population were exposed to PM10 concentrations exceeding the WHO mean annual guideline value for PM10 in the period 2007 to 2011. Based on this, a total of 1049 (2%) lung cancer cases were estimated to be attributable to PM10 exposure at concentrations above the WHO guideline value (men 682, women 367) (Figure 2).

According to a national representative population-based survey on sunbed use in Germany in 2007, 28% of the German population have used sunbeds at some time in their life (24). We estimated that a total of 892 (5%) malignant melanomas are attributable to ever use of sunbeds (men 360, women 532) (Figure 2, eTable 16). Additional analyses indicated that the vast majority of these cases could be due to highly frequent sunbed use (eTable 17).

In sensitivity analyses using the 95% confidence limits of risk estimates, estimated numbers of cancer cases attributable to the selected environmental factors ranged from 1500 to 9500 (eTable 18).

To estimate the total proportion of cancer cases in Germany in 2018 that could be attributed to all modifiable cancer risk factors considered in this article and in the articles by Mons et al. and Behrens et al. in this issue, we combined the single PAF to estimate a joint PAF assuming independence of risk factors (28). We estimated that of all cancer cases to be expected at ages 35 to 84 years in Germany in 2018 (about 440 000 cases), 37.4% of incident cancer cases are attributable to the considered modifiable risk factors and thus are potentially avoidable (Figure 3). The lifestyle-related factors, in particular smoking, but also dietary factors, overweight, and physical inactivity, contribute most to this cancer burden. More than 17 600 cases (4.0%) are attributable to infections and more than 5400 cases (1.2%) are attributable to selected environmental factors. Reducing the prevalence of these risk factors in the German population has the potential to substantially reduce the cancer burden.

Figure 3
Estimated number and proportion of all incident cancer cases (ICD-10 C00-C99 without C44) attributable to the reported lifestyle-related factors, environmental factors and infections among men and women aged 35 to 84 years in Germany for the year 2018
Enlarge All figures

Effective strategies to reduce the cancer burden attributable to infectious agents include infection control and vaccination promotion. While prevalence of H. pylori infection seems to decline substantially in younger birth cohorts even without specific intervention, enhanced promotion of and adherence to HPV vaccination could reduce the burden of HPV-related cancers. For example, Australia has achieved a considerable fall in the prevalence of the most common high-risk HPV types among 18- to 35-year old women in recent years through the implementation of a comprehensive government-funded national school-based vaccination program (29).

About 1.4% (ca. 3300) of all cancer cases in men and 1.0% (ca. 2000) of cases in women were estimated to be attributable to selected environmental risk factors. Of all these factors, indoor radon accounted for the highest proportion and number of cancer cases (ca. 3100). Overall, the estimated PAF are roughly in line with previous studies (30–32). With respect to air pollution, a recent study (32) estimated the number of lung cancer cases attributable to fine particles (PM2.5) in the UK to be considerably greater (1.0% of all incident cancer cases) than those in this study, which likely reflects the differences in particle size and reference exposure levels. Generally, it is important to keep in mind that the assumptions that were made to estimate the number of PM10-attributable cancers are quite conservative, as a guideline-based reference level was chosen, even though an increased risk for lung cancer has also been reported for exposure levels below current guidelines (1, 31). All of the considered environmental factors are potentially avoidable and there is evidence that exposure could be reduced by policy measures, such as comprehensive smoke-free legislation (34), building regulations for radon prevention and mitigation (35), road traffic-related emission control interventions to improve air quality (36), and restriction of access to sunbeds (37).

This is the first study to provide estimates of the cancer burden attributable to infections and selected environmental factors in Germany in 2018. Our estimates are based on the latest population projections and cancer registry information and—for most of the considered risk factors—nationally representative survey data on seroprevalence of infections and prevalence of exposure to environmental factors. In agreement with previous studies from other countries, we assumed latency periods for most risk factors, taking into account that current cancer cases were caused by past exposure (38). We were not able to quantify the combined impact of different risk factors due to lack of appropriate data. Generally, we may have underestimated the cancer burden attributable to environmental factors because reliable population-based prevalence estimates were not available for some established risk factors, including exposure to natural solar radiation, which is considered the most important environmental cause of skin cancer (25). In addition, we could not consider numerous potentially carcinogenic environmental factors because they have not yet been sufficiently examined in epidemiological studies.

Our findings suggest that of all cancers expected in 2018 in Germany, at least 5% are attributable to infections and selected environmental factors. Although the estimates rely on several assumptions and not all risk factors could be considered, the results indicate that many thousand cancer cases could be avoided if exposure to these risk factors were reduced or eliminated through effective prevention measures. Further research should be directed towards more comprehensive identification and quantification of environmental risks as a basis for targeted cancer prevention.

Figure 1
Estimated number and proportion of site-specific incident cancer cases attributable to infections among men and women aged 35 to 84 years in Germany for the year 2018.
Enlarge All figures

Figure 2
Estimated number and proportion of site-specific incident cancer cases attributable to selected environmental factors among men and women aged 35 to 84 years in Germany for the year 2018.
Enlarge All figures

Figure 3
Estimated number and proportion of all incident cancer cases (ICD-10 C00-C99 without C44) attributable to the reported lifestyle-related factors, environmental factors and infections among men and women aged 35 to 84 years in Germany for the year 2018
Enlarge All figures 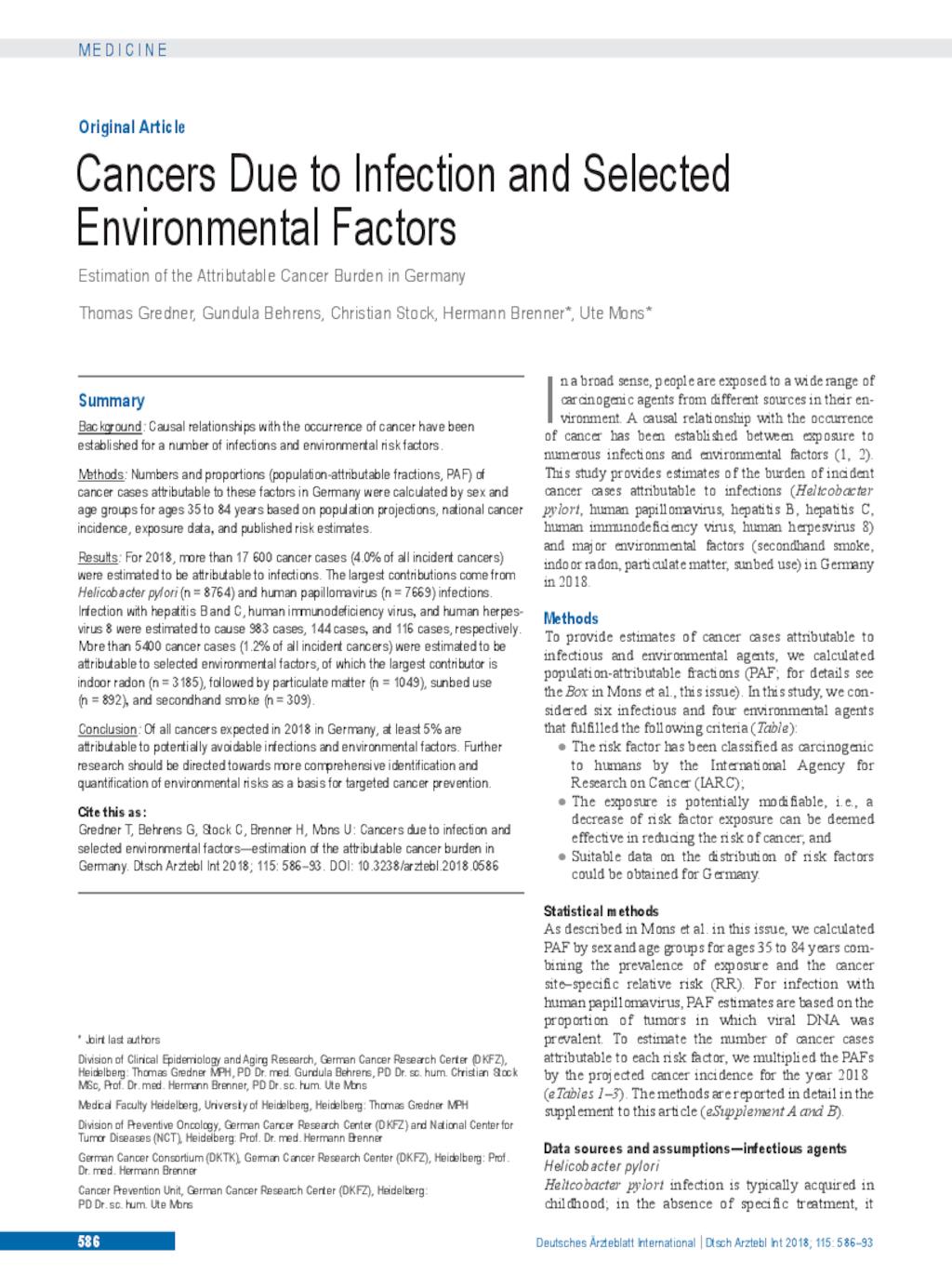