Many thanks for the important discussion point that Professor Kratz emphasizes in his correspondence. From the authors’ perspective as well as that of the German Society Interdisciplinary Emergency and Acute Medicine (Deutsche Gesellschaft interdisziplinäre Notfall- und Akutmedizin, DGINA) and the geriatric specialty societies (the German Society of Geriatrics, German Society of Gerontology and Geriatrics, Austrian Society for Geriatrics and Gerontology, and Swiss Geriatric Society), this risk constellation is also the focus in emergency departments, and a demand for action has been issued (1). In the setting of a DGINA study of quality indicators for geriatric emergency patients (GeriQ), researchers requested in addition to many other indicators in particular that screening for acute confusional states and structured medication analysis for the above-mentioned vulnerable group of patients become firmly established as early as in the emergency department (1).

Meier et al. showed that psychopharmaceuticals constitute a particular risk and often result in emergency admissions because of ADR (2). As Kratz points out, acute confusional states, but also general deteriorations in health status, electrolyte imbalances, and hemorrhagic complications are among the adverse reactions that have been observed (2). The data held in the database on adverse reactions by the Federal Institute for Drugs and Medical Devices (Bundesinstitut für Arzneimittel und Medizinprodukte, BfArM) as part of the rapid notification system support this (3). The measures and educational work that Kratz describes in his publication, and the demand from the GeriQ working group and the named position paper by the geriatric specialty societies should urgently be supported from our working group’s perspective. In order to investigate this risk constellation in greater detail, for the purpose of the ongoing collection of cases, the ADRED study (Studie zur Ursachenanalyse unerwünschter Arzneimittelwirkungen, Adverse drug reactions [ADR] leading to emergency department [ED] visits), which analyses the causes of adverse drug effects, has received ethics approval to document even severe suspected cases of ADR in patients who are unable to consent, as is obviously the case in cognitively impaired patients in (acute) confusional states. However, the data will have to be anonymized, and no biological specimens must be obtained in such cases. 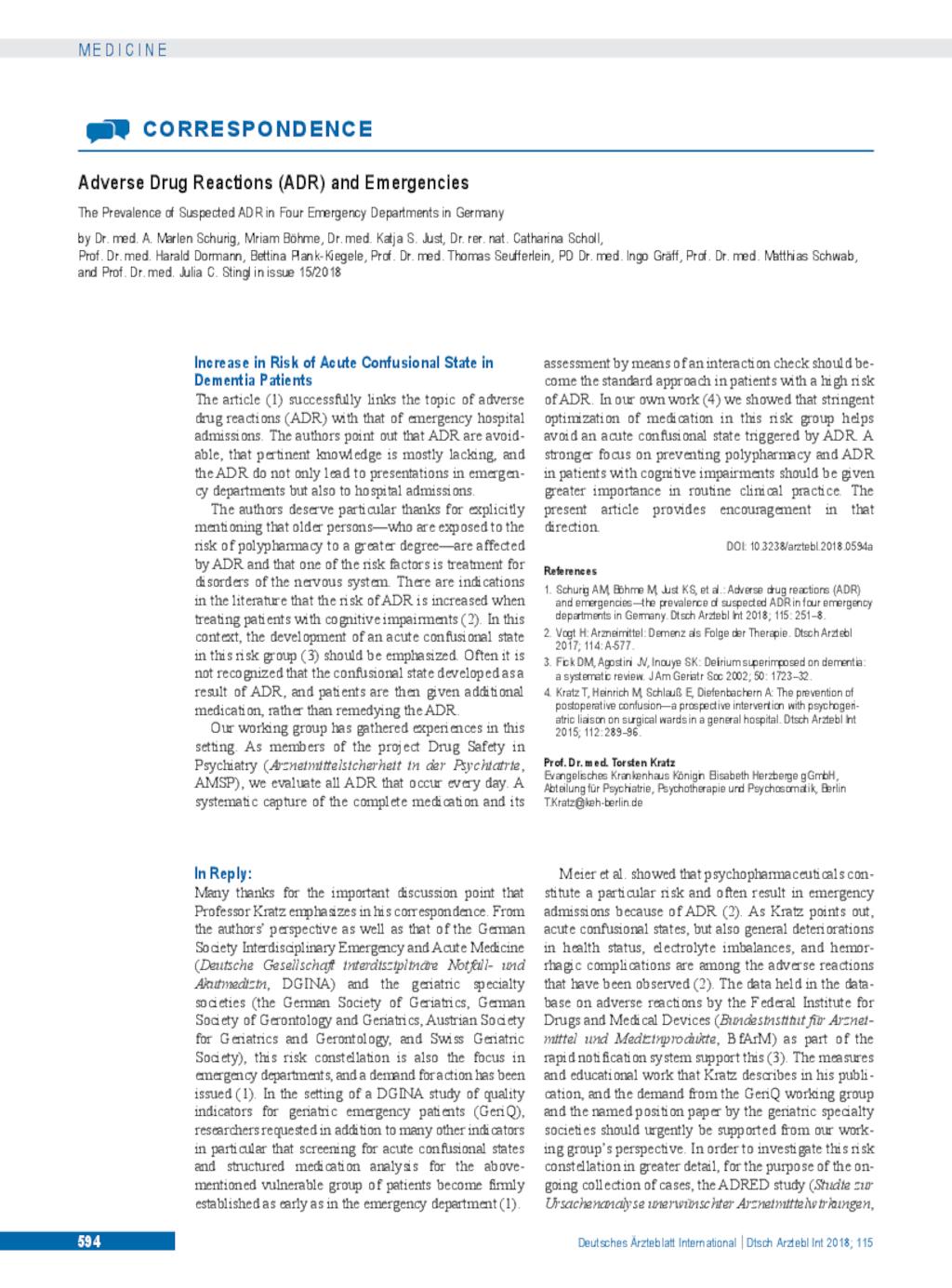