Background: Autopsies are considered an important quality assurance instrument in medicine, yet autopsy rates in many countries have been declining for many years. The proper role of the post-mortem examination in modern medicine is a matter deserving of study.

Methods: This review is based on a selective search of the literature for publications on the role of autopsies as a quality assurance instrument.

Results: Multiple studies have revealed substantial rates of discrepancy between pre- and post-mortem diagnoses, with reported rates lying in the range of 10% to 40%. The frequency of so-called Goldman I erroneous diagnoses, i.e., those that are determined at autopsy and might have influenced the patient’s survival, ranges from 2.4% to 10.7%. It can be assumed that the rate of serious diagnostic errors revealed by autopsy would fall if autopsy rates were to rise. Independently of the above-mentioned studies, a large-scale study of data from the period 1988–2008 revealed a decline in the rate of Goldman I erroneous diagnoses by more than half. The qualitative effects of autopsies, however, are difficult to measure. At present, imaging studies and minimally invasive or endoscopic diagnostic procedures can be performed post mortem as well, but the available studies show that these methods do not yet suffice to enable a coherent pathogenetic classification of disease processes.

Conclusion: Autopsies should still be performed in the interest of quality assurance in medicine. Uniform standards in the performance and reporting of autopsies could lead to improvement in the use of the data acquired through them.

Ever since G. B. Morgagni (1) first showed the scientific value of autopsies, many reasons have arisen for carrying out autopsies over the centuries (2). Despite the manifold indications for autopsy, however, over the past few decades autopsy rates have been falling all over the world, and so they have in Germany. Opinions vary as to what lies behind this drop in autopsy rates. Our own experience, based on many interviews and conversations, suggests that many doctors, especially young ones, believe that clinical findings and causes of death can be adequately investigated using available clinical diagnostic techniques, so that autopsies have become unnecessary. This view is contradicted, however, by many publications showing that discrepancies continue to exist between pre-mortem and post-mortem diagnoses. In this article, we discuss alternatives to the “classical” autopsy.

The clinical autopsy: definition and indications

A clinical autopsy is a macroscopic medical examination by a physician of (if possible) all three body cavities of a deceased person, supplemented by clinical information relating to the medical history, cause of death, and clinical questions (Box 1).

Discrepancies between pre-mortem and post-mortem diagnoses are of varying significance for the treatment of the patient and are usually classified according to the Goldman criteria (3):

Discrepancies between pre-mortem and post-mortem diagnoses

A meta-analysis that included only studies of patients who had died in intensive care between 1966 and 2011 reviewed 31 studies of 5863 autopsies (18). The prevalence of misdiagnoses ranged from 5.5% to 100%; 28% of autopsies showed at least one misdiagnosis, 8% of which were class I and 18% class II errors. The calculated rate of misdiagnoses assuming a hypothetical 100% autopsy rate was 6.3% (95% CI: [4.0%; 7.5%]). The most common misdiagnoses were pulmonary embolism, myocardial infarction, pneumonia, and aspergillosis. The authors concluded that around 34 000 (95% CI: [22 000; 40 500]) patients die every year in intensive care units in the USA as a result of class I errors, assuming that these misdiagnosed conditions were the cause of death.

A study from the Leipzig University Hospital Institute of Pathology analyzed all 4592 autopsies carried out in the period from 2000 to 2009. This showed that 263 malignant tumors had not been found during the patient’s lifetime, equating to 5.7% of all autopsies or 20.2% of all proven malignant tumors; 23% of the malignant tumors that had not been discovered while the patient was alive were at least contributory causes of death. The most common were prostate cancer (23.9%), colorectal cancer (16.3%), renal cancer (13.0%), lung cancer (12.7%), and liver cancer (6.5%) (5, e1).

In addition to detecting discrepancies in patients with cancer, our experience shows that even now, autopsies still have an often undervalued part to play in identifying clinically obscure focuses of infection in cases where sepsis or septicopyemia has been diagnosed.

Potential uses of autopsy as a quality assurance tool

In addition to the purposes stated by the American Society for Clinical Pathology (ASCP) (20) (Box 2), quality assurance appears to be possible in the following areas:

A key point is the call from the ASCP to give greater prominence in medical curricula and training to the importance of autopsies for quality assurance, with the aim of influencing autopsy behavior in the long term.

Prevalence of autopsies in Germany

In 2017, expectations of clinical autopsy findings were formulated from the point of view of various clinical specialties, in order to produce more meaningful reports for clinicians. From the point of view of clinicians from various specialties, particular requirements for a “good” autopsy were indicated – including appropriate and timely communication of the autopsy findings (22–25).

Hofstadter (26) has emphasized that planned legal requirements such as certification programs for health care structures can only be effective if clinical autopsy is included within the structure of clinical cancer registration.

Possible reasons for the decline in autopsy numbers

Autopsy numbers have been falling for years. If you ask clinicians and pathologists why this is, they usually say it is because relatives are becoming less willing to agree to autopsy. The true reasons are more complex (2, 27, 28), but include:

Many of the younger generation of doctors never had the importance of autopsies explained to them during their training, and so they are insufficiently aware of how much there is to learn from autopsies. The time when consent for an autopsy needs to be sought is a time of great psychological stress for the doctors who have to break the news of the death, as it is for the families who have to receive it. Younger doctors having these conversations are not prepared for these situations and often will not mention the possibility of an autopsy nor ask for consent for one.

In addition, there is the fear that any errors in treatment could be revealed by the autopsy. Fear of having one’s mistakes discovered can lead to a situation where the relatives of a patient who has died are not even asked whether they would agree to an autopsy.

Role of the pathologist

Some pathologists—both in the academic environment and in private practice—have described a reluctance to performing autopsies (16). Time needed for an autopsy is time taken away from research and publishing. Recent research findings in molecular pathology offer better opportunities for high-impact publications (2). Many pathologists have a great deal to say about the importance of autopsies, but do nothing about developing initiatives to increase the autopsy rate.

Financial reasons are reported as a highly probable cause of the fall in autopsy rates. A complex autopsy, including consultation with clinicians and preparation of the autopsy report, requires many hours of work. Depending on the degree of difficulty involved, the actual cost of an autopsy should be reckoned at between €700 and €1200.

Autopsy is less well compensated financially than biopsy. In the overall finances of a hospital, too, money (= time) is often too short for clinicians to be able to devote the time required to the consultations associated with autopsies.

Role of the family

Emotional upset and grief on the part of family members also play a part in the withholding of consent to autopsy. However, a recent survey has shown that, if the question is put sensitively, 40% to 50% of relatives agree to an autopsy (29). It is unlikely that the willingness of the family to agree to autopsy is the main reason limiting the number of autopsies.

Measuring the quality effects of autopsy

Autopsy itself is not error-free, since pathologists, like all other doctors, sometimes mistake a diagnosis. To date there are no studies that have investigated the misdiagnosis rate in autopsy diagnoses (30). Neither are there any systematic studies on the question of how often no (unequivocal) cause of death can be established at autopsy. Autopsy protocols and reports are not at all uniformly presented: practically every institution has its own way of handling autopsy data, diagnoses, and reports. This makes it difficult to compare autopsy findings in a systematic way.

Recently, the Federal Association of German Pathologists (Bundesverband Deutscher Pathologen) and the German Society of Pathology (Deutsche Gesellschaft für Pathologie) published an S1 guideline for the performance of autopsies, in which many problems, tools, etc., relating to autopsies were described and discussed (31). The requirements set out in the guideline as a step towards standardization of autopsy reports will be an important instrument of quality assurance within pathology departments. In 2017, Friemann stated that “if there is to be a sustained revaluation of the clinical autopsy by the medical profession, autopsies need to reach an adequate standard of quality all over the country. One of the marks of quality is that autopsy reports reach the hospital within the period when the clinicians can still remember the deceased patient” (32).

There are no data to support the widespread belief that autopsies lead to improvements in patient care (33). This could mean that belief in the qualitative importance of autopsies really is a “matter of faith,” and that doubters can cite a lack of evidence. On the other hand, many clinicians and pathologists know the teaching effect of an unexpected autopsy diagnosis, which can continue to benefit patients with identical patterns of illness for many years after. Measuring the improvement in quality will remain difficult.

Our view is that discrepancies between pre-mortem and post-mortem diagnoses need to be recorded and compared over defined time periods. One way of retrospectively determining the usefulness of autopsies is to send out short survey forms designed to record the main features by which the usefulness of and autopsy is assessed (by the clinicians) (eQuestionnaire). Our own experience shows that a return rate of about 60% of these forms can be achieved, and that therefore autopsies—as assessed by clinicians in our hospital—have yielded relevant diagnostic and/or therapeutic information in about 60% of cases.

The guidance issued by the pathologists about autopsy quality (S1 guideline) was one building block along the road to developing a legal foundation for payments for autopsies (31). On 1 January 2016, when the German Hospital Structuring Law (Krankenhausstrukturgesetz) came into effect, the principle that autopsies as a valuable quality assurance tool might under certain conditions be paid for by supplementary funding became established for the first time under social law. The German National Association of Statutory Health Insurance Funds (GKV-Spitzenverband), the German Association of Private Health Insurers (Verband der Privaten Kran­ken­ver­siche­rungen), and the German Hospital Federation (Deutsche Krankenhausgesellschaft) are currently working together on a negotiated agreement on clinical autopsies in accordance with § 9 paragraph 1a N3.3 of the German Hospital Fees Act (KHEntgG, Krankenhausentgeltgesetz) (34).

Alternatives to the classical autopsy

In view of the falling numbers of autopsies in various countries, new techniques are being developed to enable post-mortem findings to be obtained. For this purpose, imaging techniques (computed tomography, magnetic resonance imaging, angiography) are being used post-mortem, providing an opportunity to obtain post-mortem biopsies from clinically suspect areas of morbidity and study them under the microscope. Other procedures include:

These procedures can afford insights into circumscribed disease processes and can also provide clues to causes of death. However, a complete pathogenetic account of disease processes cannot be achieved by this means (Table 3). One recent study concludes that “at present, postmortem imaging can only supplement the clinical/pathological autopsy; it cannot replace it” (40).

With discrepancy rates between premortem and postmortem diagnoses remaining steady over the years at around 10%, most clinicians and pathologists continue to regard autopsies as necessary. The autopsy rate can be increased by maintaining standards in carrying out and reporting on autopsies. On the legislative side, changes are being introduced by which autopsy is recognized as a quality assurance tool and conditions set out for improved financial compensation. At the present date, various techniques of post-mortem examination can supplement but not replace conventional autopsy. 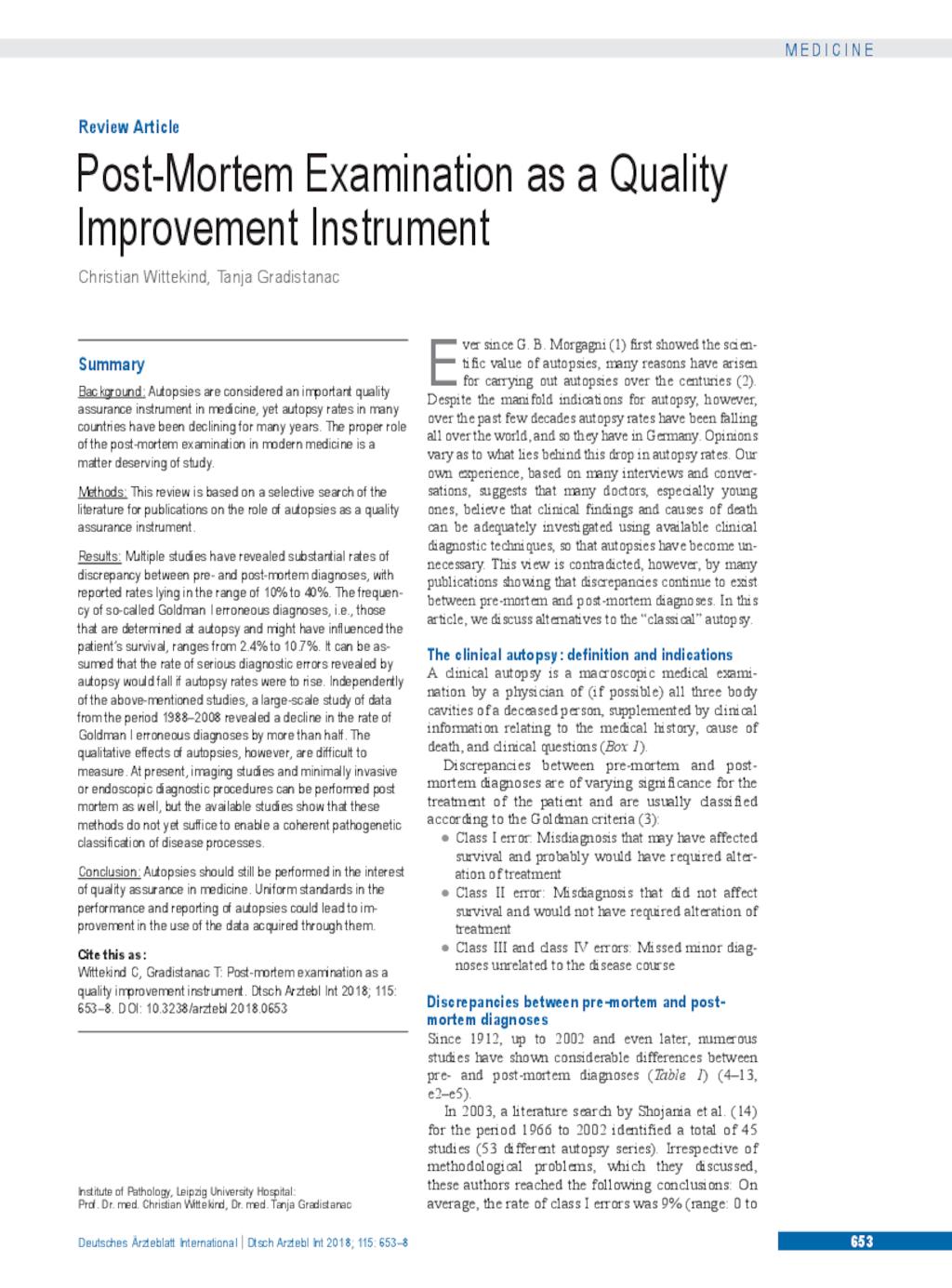