Methods: This review is based on pertinent articles retrieved by a selective search in PubMed (search terms: anticoagulation, atrial fibrillation, prosthetic valve, thrombosis, pulmonary embolism) and on specialty society recommendations and relevant guidelines from the years 2000–2018.

Results: The main indications for oral anticoagulation are atrial fibrillation, venous thromboembolism, and status post heart valve replacement. In patients with atrial fibrillation and without valvular heart disease, anticoagulation is recommended for men with a CHA2DS2-VASc score ≥ 1 and for women with a score ≥  2. NOAC for this indication are associated with a marginally lower rate of stroke than VKA (3.5% vs. 3.8%, number needed to treat [NNT] = 333) as well as a lower rate of major hemorrhage (5.1% vs. 6.2%, NNT = 91). NOAC are contraindicated for patients with mechanical heart valves. Anticoagulation with VKA can be predictably antagonized. Among the various types of NOAC, the anticoagulant effect of dabigatran can be safely antagonized with an antidote; no specific antidote is yet available for apixaban, rivaroxaban, or edoxaban.

Conclusion: The evidence base for anticoagulation over a time frame of several years is inadequate at present, and direct comparative data for the different types of NOAC are not yet available.

However, it should be noted that additional, less established risk factors, such as poor and unstable INR control in patients treated with vitamin K antagonists (VKAs) or a short time in therapeutic range (TTR) are currently not taken into account with this score. The same applies to other factors, including alcohol abuse, chronic renal failure or poor treatment adherence (2).

Currently, the individual bleeding risk is assessed using the HAS-BLED score (Table 1) (9). As a general rule, a HAS-BLED score of ≥ 3 indicates an increased bleeding risk; however, this does not mean that these patients should not receive oral anticoagulation for atrial fibrillation. Especially, it is recommended to identify risk factors for bleeding which can be treated and modified.

For patients with atrial flutter, principally the same recommendations for anticoagulation apply (2).

Occasionally, new-onset atrial fibrillation is first diagnosed while patients are assessed for other clinical events, such as surgical procedures, a stay in an intensive care unit or hyperthyroidism. These patients should usually receive anticoagulation based on the CHA2DS2-VASc score. However, if the triggering event is resolved (e.g. euthyroidism restored) or if the triggering event can be clearly attributed to another clinical condition/surgery/intervention, discontinuation of anticoagulation could be considered if no other episode of atrial fibrillation has occurred during the follow-up period (10).

For patients with mechanical heart valves, life-long oral anticoagulation with a vitamin K antagonist is recommended; however, there is only limited evidence from controlled trials available to support this recommendation (11). The target INR range has to be adapted taking into account the patient’s risk factors and the thrombogenicity of the valve. Here, the position and the type of artificial valve play a key role. Supported by strong evidence, INR patient self-testing is recommended as it helps to continuously achieve the INR target range and maximum TTR. Currently, non-vitamin K antagonist oral anticoagulants (NOACs) are contraindicated in the treatment of these patients (11). In patients with artificial heart valves experiencing a thromboembolic event despite adequate INR control, the additional administration of low-dose aspirin is recommended. After bioprosthetic valve replacement, life-long oral anticoagulation is only recommended in patients with a further indication for anticoagulation, such as atrial fibrillation or pulmonary embolism. After implantation of bioprosthetic valves in mitral or tricuspid position, anticoagulation with a VKA over a period of 3 months is an option to consider. The same applies to the situation after surgical repair of the mitral valve or tricuspid valve (11).

Venous thromboembolism (VTE) comprises proximal deep vein thrombosis (DVT) and pulmonary embolism (PE). With an incidence rate of 114 per 100 000 among males and 105 per 100 000 among females, VTE is among the third most common cardiovascular diseases (12). Besides initial acute parenteral treatment (unfractionated heparin [UFH], low-molecular-weight heparin [LMWH] or fondaparinux) during the first 5 to 10 days, oral anticoagulation is required for secondary prophylaxis. For patients with venous thromboembolism due to transient or reversible risk factors (such as surgical procedures, trauma, immobilization, pregnancy, oral contraceptives, or hormone therapy), anticoagulation for a period of 3 months is recommended (13, 14). The parenteral administration of heparin should overlap with the initiation of VKA treatment with a target INR range of 2.0 to 3.0 (evidence level B, reduction of event rate from 20.0% to 6.7%) (13, 15).

As an alternative to vitamin K antagonists, NOACs can be used. In patients with VTE, however, there are differences in the initial treatment one should be aware of. If it is planned to use dabigatran or edoxaban for maintenance therapy, treatment is continued after the initial administration of UFH, LMWH or fondaparinux without overlapping after day 5 with the oral anticoagulant. If it is planned to treat the patient with apixaban or rivaroxaban, treatment with these medications can be started immediately after the patient has been diagnosed with VTE; yet, an increased initial dose is required for one and three weeks, respectively (13, 16–18).

Differences between the substances

The choice of the anticoagulant is influenced by numerous factors. Since NOACs have not be been approved for the treatment of patients with valvular atrial fibrillation or artificial heart valve, VKAs continue to be the standard of care. For other indications, NOACs offer the significant advantage of a fixed-dose regimen without the need for routine coagulation monitoring. For the indication of nonvalvular atrial fibrillation, meta-analyses of all approved NOACs found a significantly improved protection against cardioembolic events compared to VKAs (absolute reduction from 3.8% to 3.1%), primarily due to lower intracranial bleeding rates (absolute reduction from 1.5% to 0.7%). Comparisons between various NOACs and VKAs showed significant event rate reductions for dabigatran and apixaban. Furthermore, a minor reduction in all-cause mortality in favor of NOACs was found compared to VKAs (absolute reduction from 7.7 % to 6.9%) while, according to significance, the major bleeding rate was the same (absolute reduction from 6.2% for VKA treatment to 5.1% for NOAC treatment); the single substances apixaban and edoxaban showed a significant advantage over VKA (Table 2). In patients receiving NOACs, increased rates of gastrointestinal bleeding have been observed (absolute increase from 2.0% with VKA treatment to 2.6% with NOAC treatment) (19, 20). It is essential to take into account the fact that data from clinical studies must not be uncritically applied in everyday clinical practice where treatment decisions should be based on the specific assessment of the individual patient. In the differential therapy of VKAs versus NOACs for the treatment of atrial fibrillation, the quality of anticoagulation achieved with VKA is of importance since NOACs do not offer an advantage in patients on VKA who achieve good INR control (17). In addition, poor treatment adherence and the lack of an antidote for factor Xa inhibitors in emergency situations are reasons to rather choose VKA therapy.

For the indication of venous thromboembolism, NOACs showed similar efficacy compared to VKAs (recurrent VTEs 2.0% with NOAC treatment, 2.2% with VKA treatment) along with reduced rates of bleeding complications; however, this advantage was small (number needed to treat [NNT]: 149 for major bleeding and 1111 for fatal bleeding) (21, 22).

The group of vitamin K antagonists (VKAs) comprises phenprocoumon, acenocoumarol (not approved in Germany) and warfarin. In Germany, phenprocoumon is commonly prescribed and, to a lesser extent, warfarin. While most studies are based on warfarin, a similar effectiveness is assumed for the other substances in this group. VKAs mainly show differences in their half-lives (phenprocoumon 72–270 h, warfarin 36–42 h and acenocoumarol 8–24 h). Numerous drug-drug interactions resulting in an increased effect of VKAs have been described, including interactions with nonsteroidal anti-inflammatory drugs, tetracyclines, erythromycin, sulfonamides (e.g. sulfonylureas), valproate, allopurinol, and levothyroxine; by contrast, the effect of VKAs is reduced by rifampicin, azathioprine, carbamazepine, barbiturates, cholestyramine, and glucocorticoids. In addition, interactions with food have to be taken into account, such as reduction in the effect of VKAs related to the intake of alcohol and vitamin K-rich foods.

A major disadvantage of VKAs is their narrow therapeutic index and the little time patients actually are in the therapeutic INR range (TTR, time in therapeutic range). Even in well-designed studies comparing VKAs with NOACs, the mean TTR was only in the range of 55 to 65% (23–26). INR self-management can increase TTR and is associated with a lower rate of thromboembolic events among patients receiving VKAs (absolute event reduction from 5.2% to 3.7%) (27).

Non-vitamin K antagonist oral anticoagulants (NOACs) were developed as an alternative to VKAs for oral anticoagulation therapy in patients with nonvalvular atrial fibrillation and venous thromboembolism. The key advantage of NOACs over VKAs is that they allow for a fixed-dose regimen without the need for regular coagulation monitoring. Therefore, treatment with NOACs is especially useful in patients who, despite good compliance, tend to show considerable fluctuation in INRs with VKA treatment, who have drug-drug interactions with VKAs or in whom regular INR monitoring is difficult for logistic reasons. Among the 4 approved NOACs, it can be differentiated between the thrombin (coagulation factor IIa) inhibitor dabigatran and the direct factor Xa inhibitors rivaroxaban, apixaban and edoxaban (Table 3) (2, 28, 29). Both patients receiving VKAs and those receiving NOACs should be provided with patient cards and be regularly monitored (30).

Table 3
Overview of the non-vitamin K antagonist oral anticoagulants (NOACs) (according to [2, 28])
Enlarge All figures

The anticoagulant effect of dabigatran can be reliably estimated using the ecarin clotting time or, alternatively, using the widely available thrombin time (sensitive across the entire concentration range). The activated partial thromboplastin time (aPTT) increases with dabigatran administration; however, there is no linear relationship between intake and anticoagulant effect. By contrast, reliable monitoring of the effect of factor Xa inhibitors can only be achieved by a costly specific anti-factor Xa activity test. The standard coagulation parameters—Quick one-stage prothrombin time/INR and aPTT—are changed by the administration of factor Xa inhibitors (small or variable increase within the therapeutic range); however, both parameters do not allow reliable quantitative interpretation of the anticoagulant effect.

In patients with renal failure, rivaroxaban, apixaban and edoxaban can normally be prescribed up to a glomerular filtration rate (GFR) of 15 mL/min. In the relevant studies on all 4 NOACs, however, only patients with GFR ≥ 30 mL/min (apixaban ≥ 25 mL/min or creatinine <2.5 mg/dL) were included; consequently, meaningful data are only available for patients with moderately impaired renal function. Moreover, it should be noted that similar to the situation with low-molecular-weight heparins no specific antidote for the factor Xa inhibitors rivaroxaban, apixaban and edoxaban has (yet) become available. For the thrombin inhibitor dabigatran, the antidote idarucizumab is approved which rapidly and safely reverses the anticoagulant effect of the drug (31).

Moreover, other studies demonstrated that certain surgical procedure with low bleeding risk can be performed without interruption of VKA anticoagulation. These data refer to pacemaker or defibrillator implantations (35), extractions of teeth (36) and cataract surgery (37). Furthermore, NOAK anticoagulation is received by a large proportion of the patient in whom bridging of the interrupted treatment with parenteral anticoagulation appears to be unnecessary.

For patients treated with NOACs, the following recommendations apply: No bridging with unfractionated heparin or low-molecular-weight heparin when NOAC treatment is interrupted; this also applies to patients with high thromboembolic risk. Preoperatively, it should be clearly defined for how many days treatment will be interrupted; for this decision, the factors renal function, age, individual bleeding risk, bleeding risk of surgery, and concomitant treatments, for example with aspirin, are to be considered (Table 4). For procedures where complete and immediate hemostasis is achieved, it is recommended to restart treatment with NOACs after a period of 6 to 8 hours. For procedures associated with a high bleeding risk, it is recommended to restart NOAC treatment after a period of 48 to 72 hours; in this case, the aim is to provide venous thromboembolism prophylaxis, e.g. with low-molecular-weight heparin, 6 to 8 hours after surgery. Currently, no data on the effect of NOAC dose reduction are available. VKA therapy should not be bridged using NOACs (38).

Table 3
Overview of the non-vitamin K antagonist oral anticoagulants (NOACs) (according to [2, 28])
Enlarge All figures 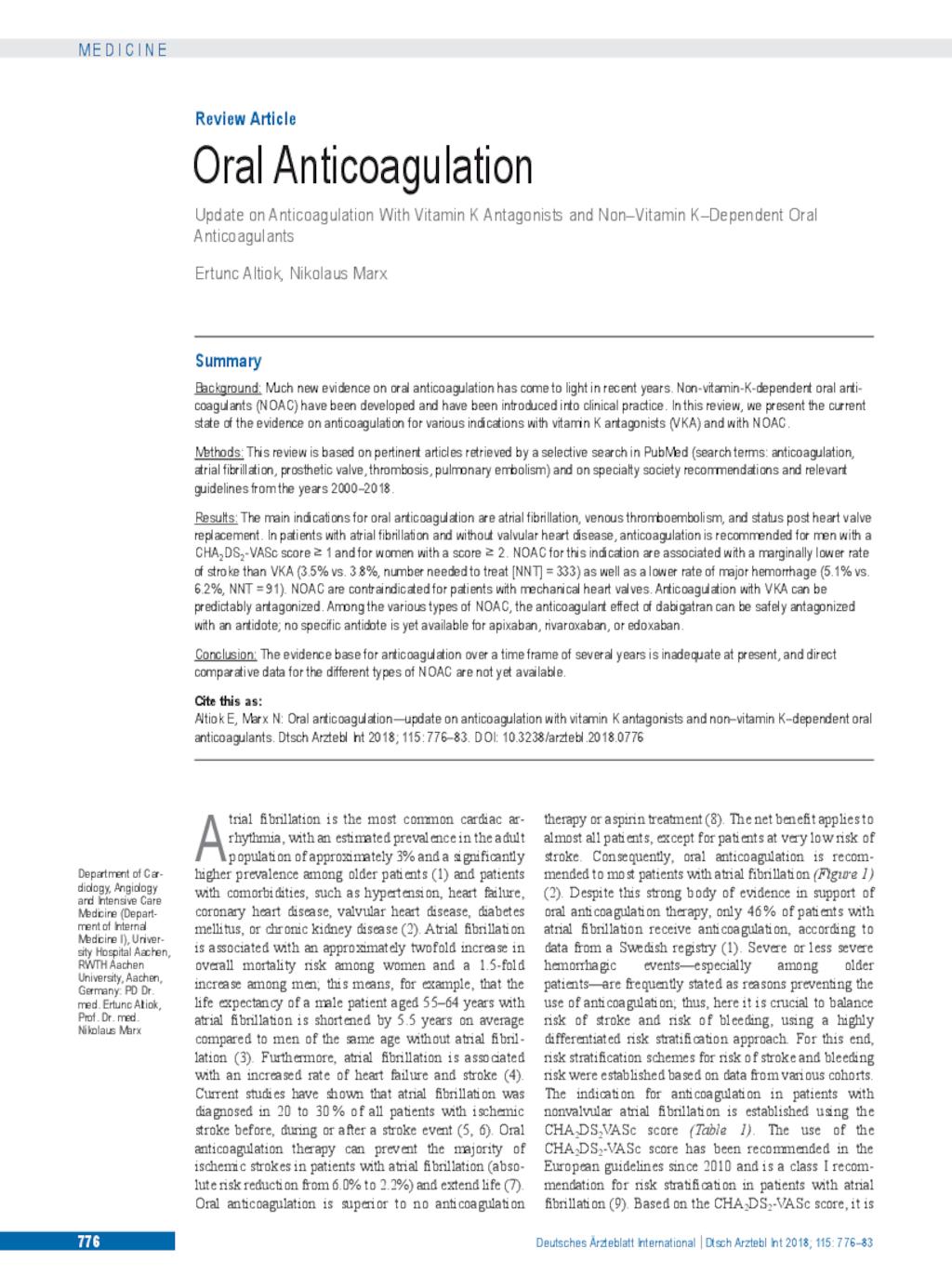