We thank our colleagues for their correspondence. They show the importance of differentiating the scientific-medical reasoning for the relevance of irreversible loss of brain function (ILBF) as a reliable sign of death from other questions associated with death.

On the one hand, the externally visible reliable signs of death mentioned by Parzeller et al. and the comments relating to § 3 TPG were not the subject of our article on the relevance of ILBF as a reliable sign of death. The objection regarding the fourth revision of the guideline was not justified, and neither were Ritz’s misgivings about determination of ILBF—we therefore are unable to comment. In our opinion, the criticism of death as the biological end of human life cannot be deduced from the cited handbook article. The fact that the German Medical Association functioned as a guarantor is based on the multitude of responsibility transfers within the transplant law. In view of our pluralistic society, it is not surprising that the German Ethics Council expressed its position, as is well-known, in a majority and minority vote. By contrast we wrote our article (1) in an interdisciplinary fashion and reached uniform consent among all involved.

On the other hand, it is obvious that everyone’s individual approach to death always includes—in addition to the medical aspects—the religious-metaphysical, cultural, and everything but medical aspects, as emphasized by Bahemann and Ritz. But let us clarify: with ILBF, the “brain tool” is lacking not only for communicating one’s “inner life,” but also for perception and consciousness. We are not familiar with any “international consensus,” according to which people with ILBF as established by using the appropriate protocol are “dying but still alive.” Rather, the relevance of ILBF as a reliable sign of death is accepted by the responsible medical professional societies and has become anchored in the law in several countries. The relevant declarations from the churches are included in the reference list with our article.

We wish to thank Firsching for clarifying once again two aspects, which also touches on the comment by Ritz, that the “definition of brain death” had primarily satisfied a requirement of transplantation medicine. In any case, considerations on the motives of scientific statements need to be clearly distinguished from what the statements actually say. 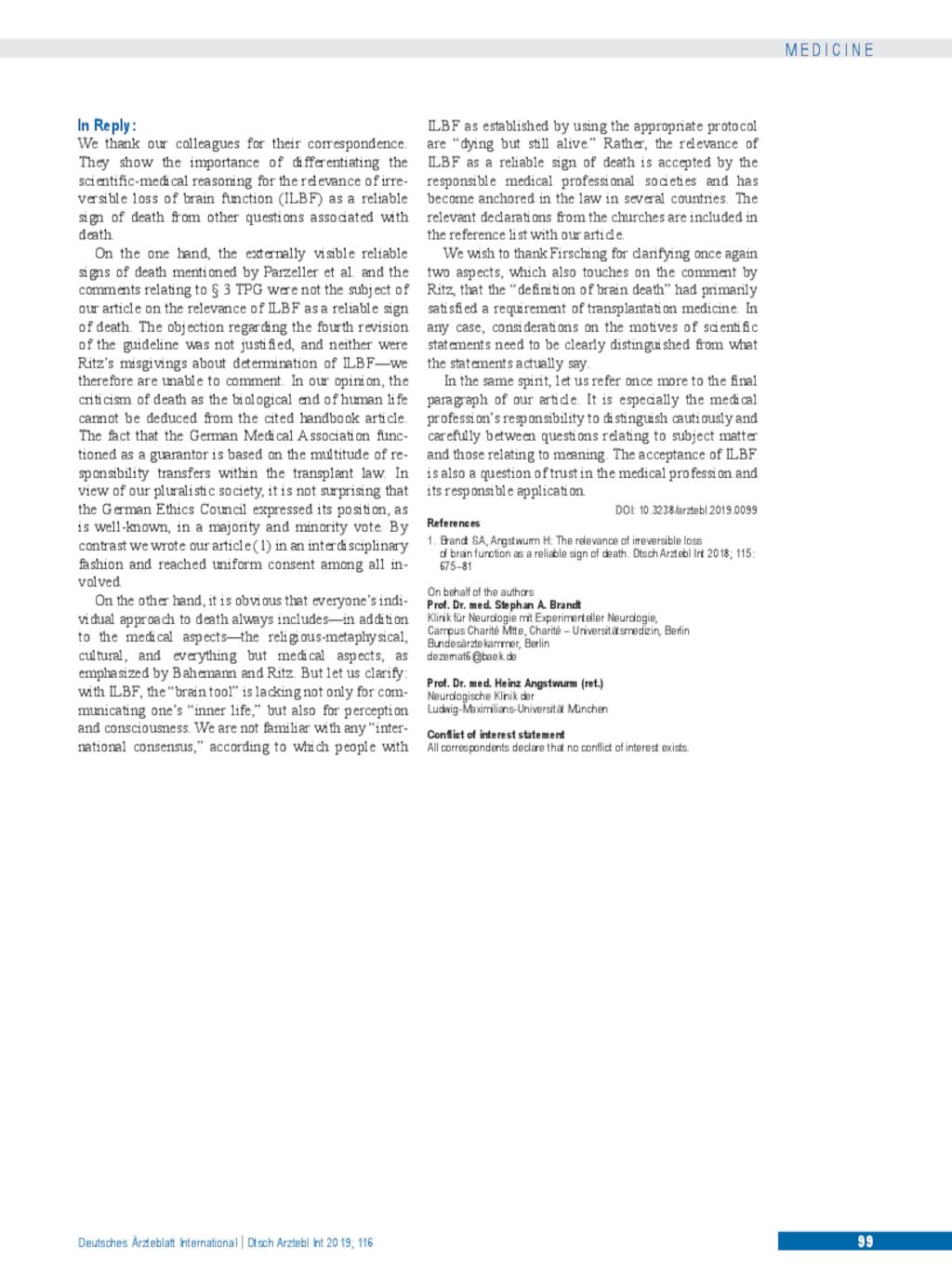